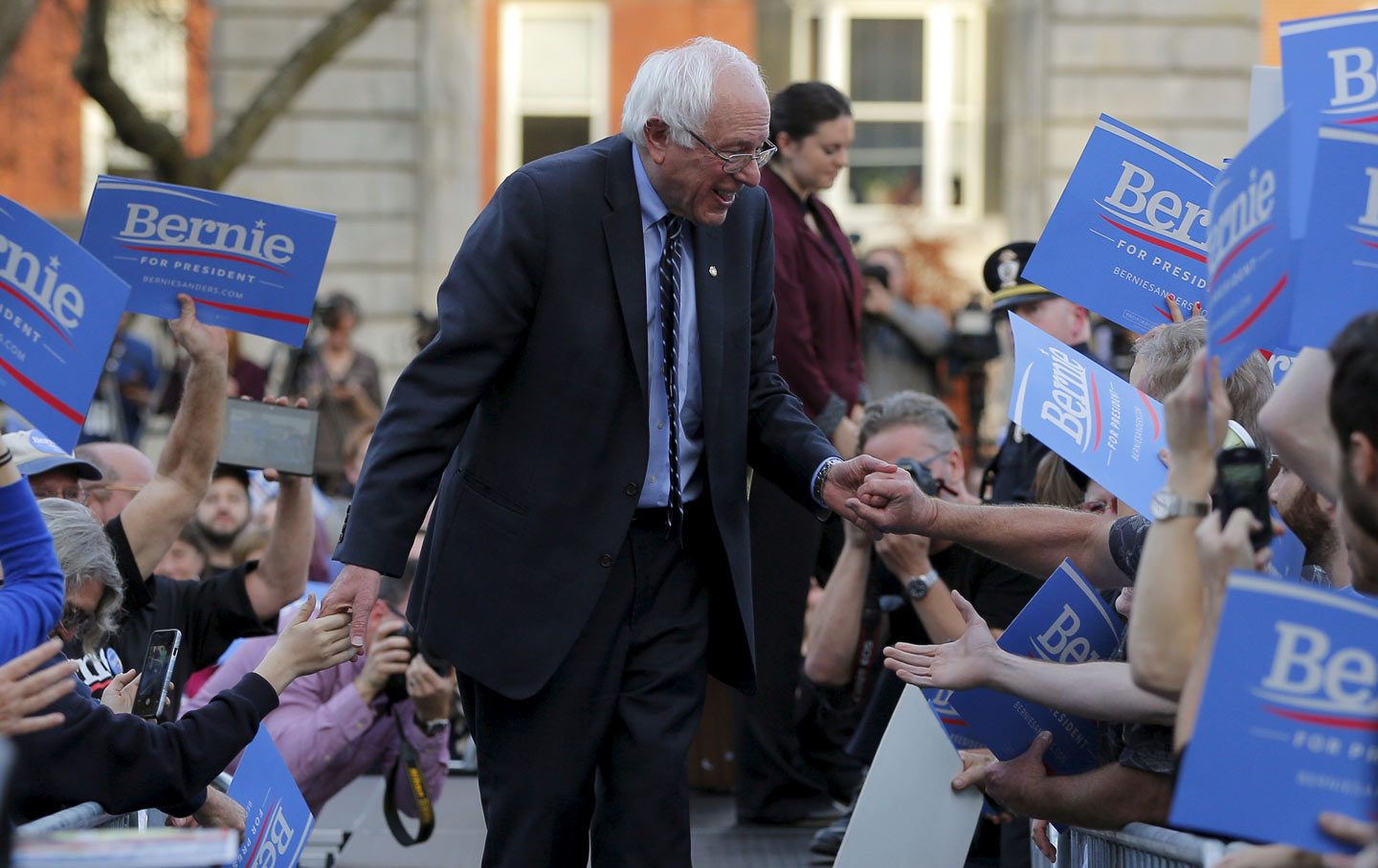 It should not have been news to anyone that Bernie Sanders decided to run for president as a Democrat because he did not believe an independent candidacy would have been treated seriously—let alone fairly—by major media outlets in the United States.

But it was news—or, at least, it was treated as news by some of the very media outlets that he was talking about when the subject came up Monday night.

When Sanders appeared on the MNSBC “Town Hall” program from Ohio—where voters will cast ballots Tuesday in one of five critical Democratic primaries—the first questioner from the crowd noted that: “Throughout your career in Congress, you ran as an independent while caucusing for Democrats.”

“I’m curious about what went into your decision to run for president as a Democrat,” continued the questioner. “Wouldn’t it be more revolutionary—to work outside the traditional political party structure and run as an independent?”

“(In) terms of media coverage—you have to run within the Democratic Party.” —Bernie Sanders on media and politics

The longest serving independent member of the Congress responded with a stark assessment of the media.

Referencing the host of the town hall discussion, Chuck Todd of “Meet the Press,” Sanders said, “See, the problem is Chuck would not have me on his program if I did that.”

Todd countered, declaring: “That is not true.”

“Oh, sure…” said a bemused Sanders.

“We love independents running,” continued Todd. “The more the merrier.”

“Nah, nah, nah…” said Sanders, who explained: “Look, here’s the truth. You’re right, I am the longest-serving independent in the history of the United States Congress. And when we gave some thought to running for president, and the reason I gave thought, honestly, is not because I disrespect Secretary Clinton. I’ve known her for 25 years and I respect her. I just happen to believe that in this moment of history, given the crises that we face, it is too late for establishment politics and establishment economics. So we did have to make that decision. Do you run as an independent? Do you run within the Democratic party?”

The Commission on Presidential Debates erects tall barriers to independent and third-party candidacies.

This was not much of a revelation. Sanders spoke frequently in interviews with The Nation during the period when he was considering whether to seek the presidency, and he explained in great detail his concerns about the challenges that face independent and third-party candidates. The Vermont senator recalled the presidential candidacies of consumer activist Ralph Nader and others (going back to Wisconsin Senator Robert M. La Follette in 1924) who had tried to open up the political process by running against the two major parties. He explained that he did not believe he would get a fair shake from the major media outlets that—among other things—acquiesced to Commission on Presidential Debates rules that were designed to marginalize independent and third-party candidates who do not happen to be as wealthy as 1992 contender Ross Perot.

Sanders also explained his determination to avoid playing a spoiler role that might tip the 2016 race to a right-wing Republican. And he pointed out that he was comfortable working with Democrats—with whom he has caucused since 1991—in rejecting right-wing dogma and policy.

Sanders even took some hits from Democratic partisans who saw the statement as evidence of political impurity.

Actually, as the senator said, he ran as a Democrat to mount what has turned out to be a serious challenge to “establishment politics and establishment economics.”

At this still relatively early stage in the process, he has won millions of votes and almost 600 delegates to this summer’s Democratic National Convention. His supporters have energized the party in states across the country. And there is broad recognition that his focus on economic-justice issues has influenced the rhetoric and policy stances of Democratic front-runner Hillary Clinton. So the decision to run as a Democrat seems to be working—except in one sense.

Sanders still does not get anything akin to fair media coverage for a candidacy that has packed rally halls, won primaries and caucuses and upset the calculus of political and media elites.

Reviews of network news coverage of the various campaigns reveal that Sanders has gotten only a fraction of the coverage afforded Republican Donald Trump. “The network newscasts are wildly overplaying Trump, who regularly attracts between 20-30 percent of primary voter support, while at the same time wildly underplaying Sanders, who regularly attracts between 20-30 percent of primary voter support,” observed Media Matters analyst Eric Boehlert in a December review of data collected by media analyst Andrew Tyndall. “Obviously, Trump is the GOP front runner and it’s reasonable that he would get more attention than Sanders, who’s running second for the Democrats. But 234 total network minutes for Trump compared to just 10 network minutes for Sanders, as the Tyndall Report found?”

Updates from the Tyndall Report and other sources reveal that Sanders is still neglected by a media that has provided dramatically more coverage to Trump and Clinton than to Sanders. So it may be that, even when an independent thinker runs as a Democrat (or, for that matter as a Republican), he still can’t get fair and balanced coverage of a muscular challenge to “establishment politics and establishment economics.”