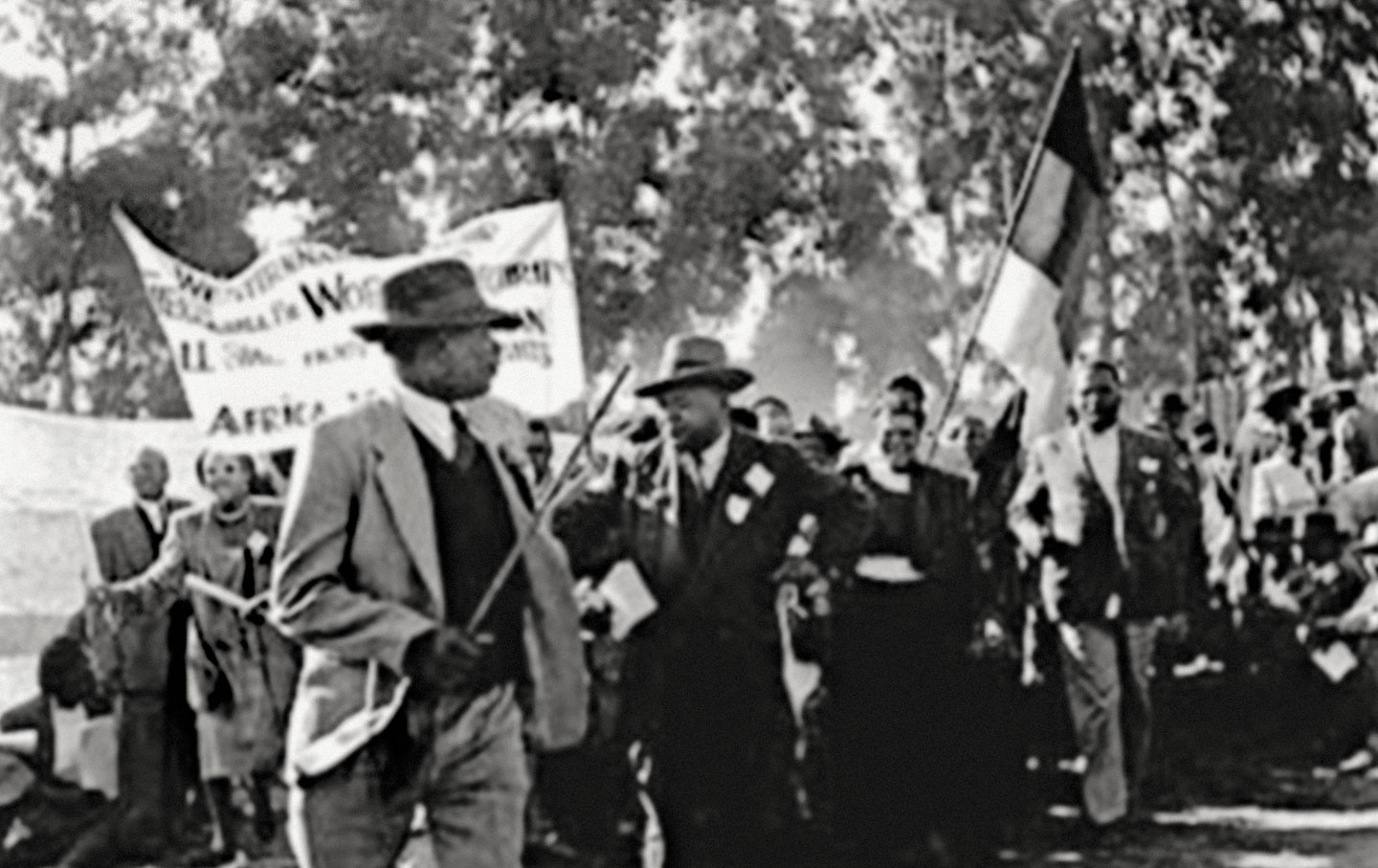 In the fall of 1979, the Rev. Jesse Jackson invited me to accompany him on a ten-day visit to South Africa, coordinated by the African National Congress. Everywhere we went, from Cape Town to Durban, from Port Elizabeth to Johannesburg, the Freedom Charter would come up at some point in our conversations. This document, drafted by the ANC, had been discussed and modified by gatherings all around the country before being adopted at a nationwide assembly in Kliptown in 1955. Its vision—of a South Africa with civil, human and economic rights for all—would serve until the end of apartheid to unite the freedom movement in all of its sectors and to inspire hope and confidence in ultimate victory, despite the pain of the struggle and the ruthlessness of the regime.

Two years later, I was privileged to be one of the people whom The Nation invited to take part in a US peace activists’ tour of the NATO countries of Western Europe. We went in response to the Reagan administration’s unilateral initiative to deploy nuclear-armed missiles in Europe, as well as the great concern being expressed in many parts of Europe about this decision. In the Netherlands, one of the groups we visited was the Women’s Peace Committee at the Catholic University of Nijmegen. Near the end of a very cordial and interesting meeting, one of the women commented: “In 1940, the Germans came; they left in 1945. In 1945, the Americans came. When are they leaving?”

These two experiences, among many others, impressed upon me the idea of a Democracy Charter as a uniting vision for the diverse sectors of our social-change movement in the United States. The following version summarizes and updates ten points I first drafted in 2005—the fiftieth anniversary of the ANC’s Freedom Charter—for a conference of US and Canadian social-change activists and academics at Simon Fraser University in Vancouver. Since then, as I’ve continued to revise the draft, study groups have formed around the country, from South Carolina to the Bay Area, to consider and update the charter as an outline of substantive democracy.

Most of the issues included in the Democracy Charter were chosen because they have been the object of public activity, led by a great variety of organizations, over a number of years. The Democracy Charter, summarized below, seeks to enlarge the public’s understanding of the connectedness of these issues as a way to achieve a social transformation of American society. This is the ultimate purpose of our movement.

I. A national commitment to affordable housing. Initiatives to house the homeless (many of them families), as well as those who pay most of their income for cramped and dilapidated housing, would create jobs in construction and renovation. Such initiatives would also give us the opportunity to increase our proportion of housing that uses sustainable energy. Negotiating realistic terms for homeowners who default on unsustainable mortgages can preserve neighborhoods otherwise destined to decay.

II. Freedom from the oppression and indignity of poverty. This would be achieved through socially useful jobs that pay a living wage as well as a comprehensive Social Security system. Standard measures of economic “growth” have proved irrelevant to the lived experience of most Americans. The severe and widespread need to which the $15-an-hour movement of low-wage workers responds would not exist in a robust democracy. Unemployment, which helps to hold down wages, often results from corporations moving overseas to increase profits and avoid taxes. The government must penalize those employers in proportion to the damage they do to American workers.

III. Education from early childhood through college, available to all. Public schools nationwide are under threat of privatization through a systematic reduction of resources, combined with taxpayer-funded “alternatives” such as for-profit chains of corporate charter schools. A publicly operated education system that prepares youngsters to begin formal learning, then supports them as far as their ability and inclination take them, is key to strengthening citizen engagement, reducing poverty and revitalizing the economy.

IV. The right to an environment free of bigotry, violence and intolerance. This would be a profound expression of our irreversible commitment to human rights, including reproductive and LGBTQ rights. The reproductive rights of women and the rights of African-American children to equal access to public education, affirmed by the Supreme Court, continue to undergo a sustained attack, primarily from the political and religious right. This is often combined with unrelenting, though increasingly unsuccessful, efforts to consign LGBTQ people to outcast status. A principled, active defense of—and protections for—the entire fabric of human rights, as an indivisible whole, is the only way to guarantee respect for all.

V. A new foreign and military policy as an expression of our nation’s democratic ideals. Our foreign policy should promote peace, cooperation with our neighbors throughout the Americas, and the future of the planet as our shared home. That means a new kind of defense budget, one in harmony with other domestic goals, not one designed to enrich the biggest corporate “defense” contractors and their stockholders while the public pays the bill. It also means that no longer will the US government produce, use or sell weapons—such as land mines, cluster bombs, depleted uranium shells and Agent Orange—that destroy the environment. The Vietnamese people are still suffering the catastrophic effects of a number of these weapons, which we shamefully used against them. And where and when was the authorization given by “We the People” for building several hundred US military bases in other countries?

As information about covert government programs is brought to light, public awareness of US activities overseas, both corporate and political, has been growing steadily—yet it has not reached the critical mass necessary to change our foreign and military policy. Fortunately, there are many examples of constructive change. Sweden’s announcement that it would extend diplomatic relations to representatives of the Palestinian people carries forward the spirit of reconciliation and respect. Initiatives for peace, democracy and ecological sustainability, launched by our neighbors throughout the Americas, draw together the voices of indigenous peoples, nations, and communities that have suffered severely from colonialism and newer forms of corporate exploitation. Our struggle for a robust democracy in the United States will be strengthened to the extent that we embrace these progressive currents of thought and action.

VI. Universal single-payer health coverage. Healthcare costs have been a major source of financial insecurity, including bankruptcy, for American families, and an estimated 100,000 people die every year from illnesses contracted as patients in our hospitals.

The Affordable Care Act of 2010 has addressed some of the most glaring shortcomings of the exclusively private or employer-sponsored system. Unfortunately, it falls far short of what’s still needed—and it remains, along with Medicare and Medicaid, under relentless assault by the right. The single-payer movement advocates a system practiced in Canada and most of Western Europe, in which the government pays the necessary expenses of medical care and also promotes practices that help maintain good health. This would eliminate the unfairness of basing prices upon satisfying corporate greed and the concerns of private investors and of basing the quality of care upon the patient’s ability to pay.

VII. A justice system absolutely fair to all. Murder with impunity, by law-enforcement officers or private vigilantes, violates both civil and human rights. Institutional racism has created a shocking racial imbalance in our jailed population. The existence of a prison-industrial complex directly violates the rehabilitation objective of the penal system in a robust democracy.

VIII. A farm economy restructured to rest on family and cooperative enterprise. Our millions of expert small farmers should not be sacrificed to the greed and unrestrained power of corporate monopolies in agriculture and marketing. Neither we as consumers, nor the environment in which we live, should be subjected to the harmful effects of industrial chemicals, genetically modified seeds, or drugs used to increase the profits in large-scale corporate farming. Everyone will benefit if traditional family farms, cooperatives and the new urban-community “food gardens” become our primary source of food production.

IX. Restoring, preserving and protecting our natural environment as a vital social inheritance for future generations. Reversing the present pattern of pollution and degradation will require government regulation of corporate activities that damage our air, water, soil and environmental resources such as parks—with substantial penalties for infractions. In Detroit, the clearly inalienable right to clean water was highlighted by struggles against the third-largest water-utility company in the country. “Self-regulation” has been amply proven to mean the absence of regulation.

X. The right to know that every vote will be counted. The assault on our voting system, which we have witnessed in successive federal elections, is now recognized as a nationwide problem of scandalous proportions. Today, our elections are conspicuously less honest than those of most Western industrialized countries. Fair voter access and the accurate tabulation of votes by accountable parties must be guaranteed, reinforced by the introduction of a system of proportional representation in all elections where applicable. Real democracy further requires an end to unlimited funding by corporate interests and the wealthy, along with the negative campaigning that erodes citizen confidence in the electoral system as a guarantor of our “inalienable rights.”

Quite often in our staff meetings with Dr. Martin Luther King Jr. in Atlanta, he would call our attention to the idea that “truth is the relatedness of facts.” The relatedness of the facts outlined above summons us to look diligently at the true conditions in our country today. The Democracy Charter is meant to serve as a living entity and guide—hopefully transformational—enabling our nation to become a society of justice, peace and enduring friendship with our neighbors across the world. This is the “good news” that we strive to attain. This is the challenge that we embrace. We shall overcome.