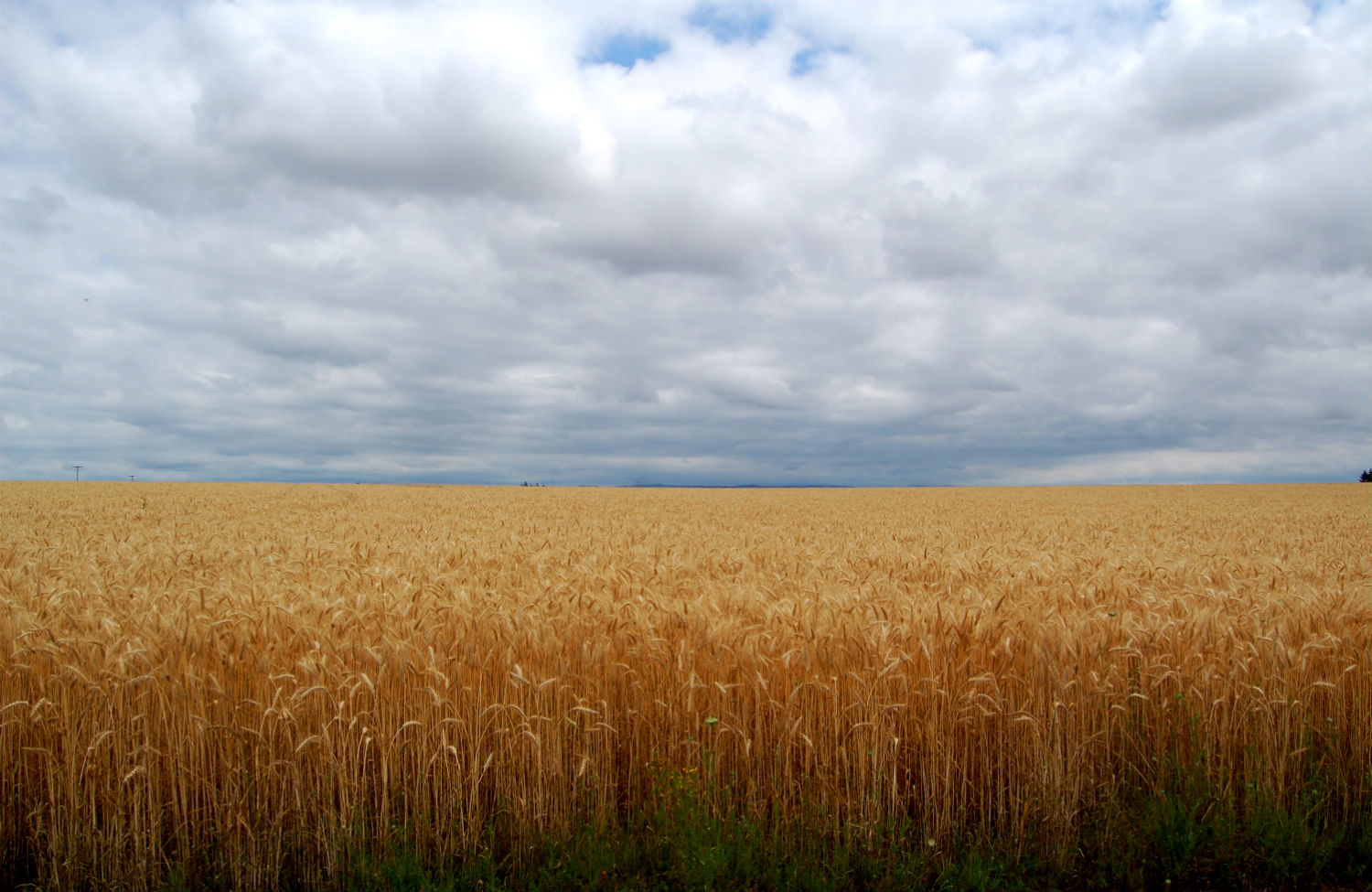 Oregon wheat farmers are among those fighting to ban GMOs in the Beaver State. (Flickr/ Edmund Garman)

Now that the US Supreme Court has undermined historic controls on monopoly politics, corporate cash flows into election campaigns at an unprecedented rate.

But it does not always win.

They took on some of the largest chemical, biotechnology and agribusiness corporations in the world—Dow, DuPont, Monsanto, Syngenta, among others—in an election campaign where 95 percent of the money spent against them came from outside the county.

But when the ballots were counted Tuesday night, the farmers won.

Jackson County voted by a two-to-one margin to ban the genetically engineered crops.

“The voters here have many generations of fruit and vegetable growing, so they’re among the most educated voters. The opposition spent a million dollars and couldn’t convince the people,” explained Chuck Burr, the president of the Southern Oregon Seed Growers Association, which describes the region’s fertile valleys as “the perfect seed growing environment.”

It was a remarkable victory, which the corporate money power and its political allies did everything in their power to stop.

When Jackson County’s farmers learned that Syngenta AG, the Swiss agrochemical giant, was growing genetically altered sugar beet seeds in Jackson County fields, local farmers worried about the threat posed by cross-pollination of genetically modified seeds with their local and organic seeds. So they did what Americans are supposed to do. They gathered in local Grange halls and community centers and organized a petition drive to put a measure banning GM seeds on the ballot.

Then the firestorm hit.

The Oregon legislature, with encouragement from the chemical giants, quickly enacted what critics referred to as “The Monsanto Protection Act.” As it was happening late last year, Melissa Wischerath and Mary Beth Williams of Oregon’s Center for Sustainability Law argued in the Eugene Weekly that “the bill is based on corporate-funded American Legislative Exchange Council (ALEC) proposed legislation from 2007.”

The Center for Media and Democracy’s Rebekah Wilce has detailed how ALEC has been stepping into food fights, noting that in recent years the group has developed “model legislation” such as the “Preemption of Local Agricultural Laws Act.”

In fact, ALEC promotes a wide range of so-called “pre-emption bills,” which take authority away from cities and counties, where local democracy can often beat back big money, and moves it to the state level. There, generous campaign donations can sway legislators and expensive TV ads can swing referendum votes—as has happened on proposals for GM labeling in California and Washington, where the corporations and their allies spent tens of millions to prevail in 2012 and 2013.

But the pre-emption came too late to stop the farmers of Jackson County. Because they got their campaign going before the legislature acted, they were exempt from the top-down pre-emption.

They were not, however, exempt from the scare campaign that was coming their way.

In a county where the most expensive previous campaign on an initiative measure had cost around $100,000, Monsanto alone gave $183,294 to block the proposal. DuPont gave $129,647. Syngenta gave $75,000. Bayer CropScience gave $22,352. Dow AgroSciences $22,352. BASF Plant Science $22,352. And those were just the biggest checks. Groups affiliated with the Farm Bureau, which often aligns with agribusiness interests, sent substantial checks from states around the country. In all, according to media reports, the campaign to block the ban raised close to $1 million, and it flooded the local airwaves with ads claiming farmers would be burdened and that enforcement costs would eat up the county budget.

Ninety-five percent of the money came from outside the county.

“Indeed, they do want to squash us like a bug,” said Chris Hardy, an organic farmer who worked with the group GMO-Free Jackson County to qualify the initiative proposal. “This is about whether we are going to turn the keys to agriculture in the Rogue Valley over to a multinational corporation or we are going to say no and stand up to protect our family farms’ future.”

The farmers and their allies were outspent by more than two to one. But they used their resources wisely, organizing an “Our Family Farms Coalition” that secured endorsements from small businesses like Bad Ass Coffee and the Buttercloud Bakery and Café in Medford, Daddy’s Donuts & Juices in Grants Pass and the Four and Twenty Blackbirds Bakery in Ashland. They got the local chapters of the National Grange of the Order of the Patrons of Husbandry, one of the oldest family farm groups in the country, on board. They got help from Consumer Reports, the Center for Food Safety Fund and the Organic Consumers Fund, along with the local Ashland Food Coop and Ashland Alternative Health. And they got a lot of small donations from consumers and citizens.

They got the local “Libraries for All” group to refute claims that enforcement costs would bust the county budget, as did the county administrator.

But, above all, their campaign highlighted many of the 150 local farmers who were part of the coalition. Some who had grown genetically engineered crops in the past went on air to talk about why they backed the ban. One of the most effective ads featured a farmer whose family has worked the land in southern Oregon since the 1800s saying, “As a fiscally conservative Republican, I can say that the opposition’s claims that [the measure] would have high-enforcement costs, or threaten farmers’ rights, are pure political bull. Over 95 percent of their campaign funds are from outside our county and they’re trying to scare local voters with claims that just aren’t true.”

The farmers and their allies ramped up the campaign with a “tractorcade” that saw dozens of farm vehicles parading through downtown Medford.

When the ballots were counted Tuesday, 39,489 votes were cast to ban the growing of genetically engineered plants in the county. Only 20,432 voted as Monsanto and Syngenta said they should.

And it did not stop there. Inspired by the Jackson County drive, farmers in neighboring Josephine County put a GMO crop ban on their ballot, as part of a drive to create a “GMO-free Rogue Valley.” They got going after the legislature moved to pre-empt county actions. But the group GMO-Free Josephine County decided to proceed anyway—knowing they would likely face legal challenges.

“GMO-Free Josephine County contends that proceeding with this ballot measure despite possible state preemption (SB 863) is a win-win scenario,” the coalition declared. “Even if the state bill prevails, this ballot initiative can serve as an opportunity for the residents of Josephine County to assert their rights to self-governance, free from undue outside corporate influence and state or federal preemption of critical agricultural matters that affect our local food, farms and future. “

The voters agreed. They backed the ban by a 58-42 margin.

Ronnie Cummins, national director of the Organic Consumers Association hailed the Oregon results as a win for local farmers and “a victory for the national anti-GMO movement as it builds momentum for similar bans in counties in other states.”

The results, were, as well, a win for local democracy—in the face of federal inaction and state pre-emption.

“Farmers have the right to sow the crop of their choice, free from the risk of contamination,” said George Kimbrell, Portland-based attorney for Center for Food Safety. “Where the federal government has failed, local efforts like this are taking action.”