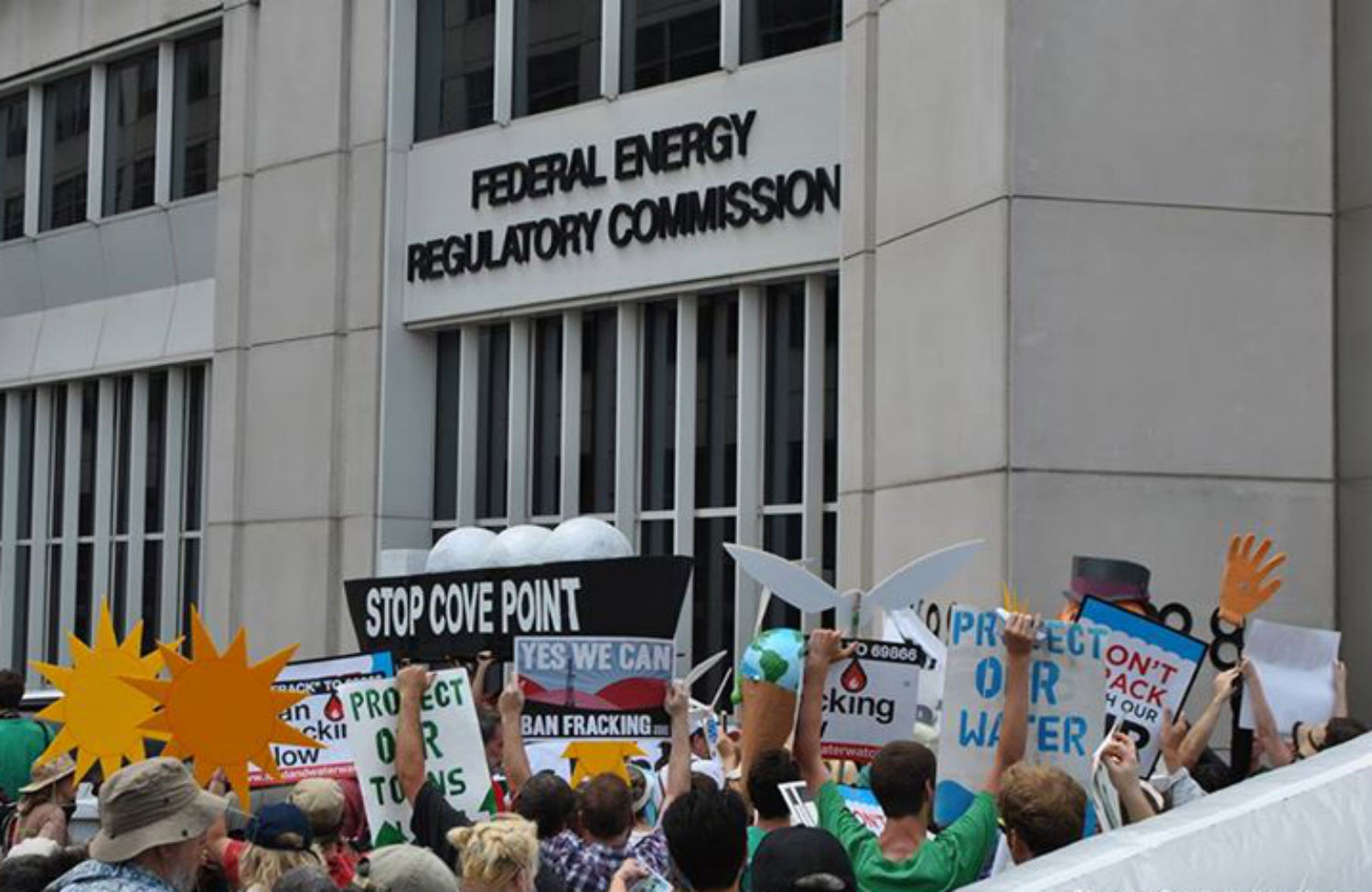 For months now, a motley crew of local activists has tried—and failed—to halt Dominion Resources’ Cove Point, a proposed $3.8 billion liquefied natural gas (LNG) export terminal in Lusby, Maryland. On Sunday, the movement got a much-needed boost from some regional and national allies.

Braving the sticky summer heat of Washington, DC, over 1,000 activists from across the Northeast and Mid-Atlantic rallied on Capitol Hill before marching to the Federal Energy Regulatory Commission, the federal agency that’s expected to issue its final decision on whether to approve Cove Point sometime next month. Protesters called on FERC to reject the project—and the eleven other LNG export terminal applications now under agency consideration.

“It’s important for people that are fighting these things in their backyard to know they’re not alone in that fight and they’re connected to a much bigger movement, a movement that’s not only fighting natural gas, but a larger climate movement that’s going to stand with them,” says Tim DeChristopher, one of the event’s speakers, best known for serving twenty-one months in prison for bidding on $1.8 million worth of oil and gas leases without planning to pay for them.

The project’s opponents share a range of concerns: on the local level, they say, the plant poses safety risks for nearby residents. They worry, too, that Cove Point will encourage more hydraulic fracturing, or fracking, across Mid-Atlantic shale fields and prompt Maryland to drop its de facto moratorium on the drilling technique, which expires in August. Western Maryland sits squarely on top of the Marcellus Shale, a hotbed of fracking activity, but the land’s been off-limits to drillers, as a state commission wraps up its three-year study on the health and safety impacts of shale drilling.

Activists also argue that Cove Point—and other LNG terminals like it—will deepen the global climate crisis. Indeed, as a recent Department of Energy report suggested, the LNG export process—which involves extracting, piping, liquefying and shipping gas across the world, then re-gasifying and piping the product to consumers—has the potential to produce more greenhouse gas emissions than a coal-fired power plant of comparable power output. The heavy footprint comes largely from methane, which has about twenty times the climate impact of carbon dioxide.

“You can’t solve climate change by switching to a fuel that’s worse than coal,” says Mike Tidwell, head of the Chesapeake Climate Action Network (CCAN), which has led opposition in Maryland and helped organize the rally.

Dominion, which declined to comment for this story, has consistently downplayed all of these concerns. It expects the plant to be fully operational by 2017.

If everything goes its way, the Virginia-based energy giant will soon take advantage of what a growing number of drillers and energy investors consider the next phase of America’s fracking boom. Before the so-called “shale revolution” kicked into high gear around 2008, there was still talk of building terminals to import natural gas. (Cove Point, in fact, was originally built in the 1970s to process LNG imported from Algeria.) But thriving production in places like Texas, North Dakota and Pennsylvania helped drive down domestic prices. No other nation has come close to replicating the scope of America’s gas boom.

That means potentially lucrative profit opportunities await those that can ship fracked gas overseas. In Japan, for example, where a large chunk of Cove Point’s exported gas would go, LNG sells for around $15 per million British thermal units—about three to four times the American price.

“It’s complicated enough that it takes a little while for people to completely understand what’s going on,” says Bill McKibben, the prominent climate activist who’s championed opposition to the now-stalled Keystone XL pipeline and fossil fuel divestment on college campuses. “[But] it has great connections to all across the Appalachians where we’ve been working hard on fighting fracking, and it has connections to overseas where we’re working hard to get people off fossil fuels. All those things are in danger if the United States opens up a big new supply of fossil fuels to the world.”

It will take some time for Cove Point to seep into the nation’s environmental consciousness. But Sunday’s protest marked its formal introduction into the US climate justice movement. The rally earned the backing of some of the nation’s most prominent environmental groups: McKibben’s 350.org, Americans Against Fracking, Center for Biological Diversity, CREDO, Food & Water Watch, Hip Hop Caucus and the Sierra Club, among others.

Like the various tar sands pipeline fights across North America, Cove Point has also managed to draw the attention of direct action-oriented radicals. Last month, about sixty people, many of them affiliated with the umbrella group Earth First!, camped out for a week in eastern Maryland, preparing for “autonomous direct action” designed to delay Cove Point’s potential approval and construction. That hasn’t happened just yet.

But that doesn’t mean civil disobedience isn’t already part of the playbook. On Monday morning, about two dozen mostly gray-haired activists risked arrest at FERC headquarters as they blockaded two of the agency’s main entrances. “Wake up, FERC!” the group chanted in unison as protesters were handcuffed and taken away by officers from the Department of Homeland Security.

That’s far from hyperbole. In fact, over the last twelve years, FERC has rarely, if ever, met a gas infrastructure application it hasn’t approved.

Given the agency’s track record, then, one can’t help but wonder: While it makes for pretty theater, is all the street heat too little, too late?

Dominion has already received the Department of Energy’s seal of approval—the first major step in the LNG export permitting process. Now the proposal is all in FERC’s hands.

On May 15, FERC released its environmental assessment of Cove Point—a report that gave every indication it’s ready to give Dominion the green light. That, in turn, kicked off a thirty-day public comment period, which the agency refused to extend despite a delay request from the Environmental Protection Agency. A different ninety-day review period for the key permit-issuing federal agencies such as the EPA and Army Corps of Engineers ends August 13. FERC will most likely wait until after that deadline passes before making a decision—though, statutorily, it’s free to grant approval at any time now, since the public comment period has already ended.

“FERC is not likely to reject Cove Point unless it loses in court,” says CCAN’s Mike Tidwell. “This is all headed to court.”

Opponents see a number of potentially promising legal options on the table.

For one, if FERC gives a thumbs-up to Dominion, CCAN is prepared to sue the agency for not following the appropriate review protocol. Under federal environmental law, gas terminal proposals require an environmental impact statement. But since Cove Point already exists as an import facility, FERC has maintained that a much less rigorous environmental assessment (EA) is sufficient. The project’s opponents hope that argument won’t hold up in federal court.

They’ve already panned FERC’s report for understating Cove Point’s impacts: “This EA reads like a fifth grader wrote it,” Shilpa Joshi, an organizer with CCAN, told a crowd at a panel discussion at a DC library during the week leading up to the rally. “Okay, maybe a fifth-grade honors student.”

Tidwell also anticipates a lawsuit to emerge over the facility’s safety issues: Cove Point is packed into a relatively tight space—a potentially dangerous scenario, activists say, when pieces of machinery are chilling volatile gases to 260 degrees Fahrenheit. Other potential suits could target the company’s accident protection plan: Dominion has proposed a “vapor wall” to contain any potential leaks around the plant’s limits that some residents find inadequate. CCAN recently commissioned a report that found Cove Point could pose “intolerable” risks for workers and residents who live within eight-tenths of a mile of the site.

On top of that, the local nonprofit Accokeek Mattawoman Piscataway Creeks Council has filed a couple of lawsuits on the county level. One targets Dominion’s non-disclosure agreement with the Calvert County Board of Commissioners. The other challenges the county’s use of zoning text amendments to speed up the permitting process for Dominion.

It may sound like small stuff, but opponents figure that any delays play into their favor. Some of Dominion’s contracts rely on the company’s ability to hit certain time-sensitive benchmarks, and investors don’t like uncertainty. One or two favorable outcomes in court could go a long way in setting the project back.

It’s an apt image for this band of activists, many of whom say they never even anticipated the national attention that’s come their way.

“If you only fought battles you knew you could win, you wouldn’t fight many battles,” says Bill McKibben. “They told us it was useless to fight Keystone and we started fighting Keystone. So far, it’s not built yet either.”