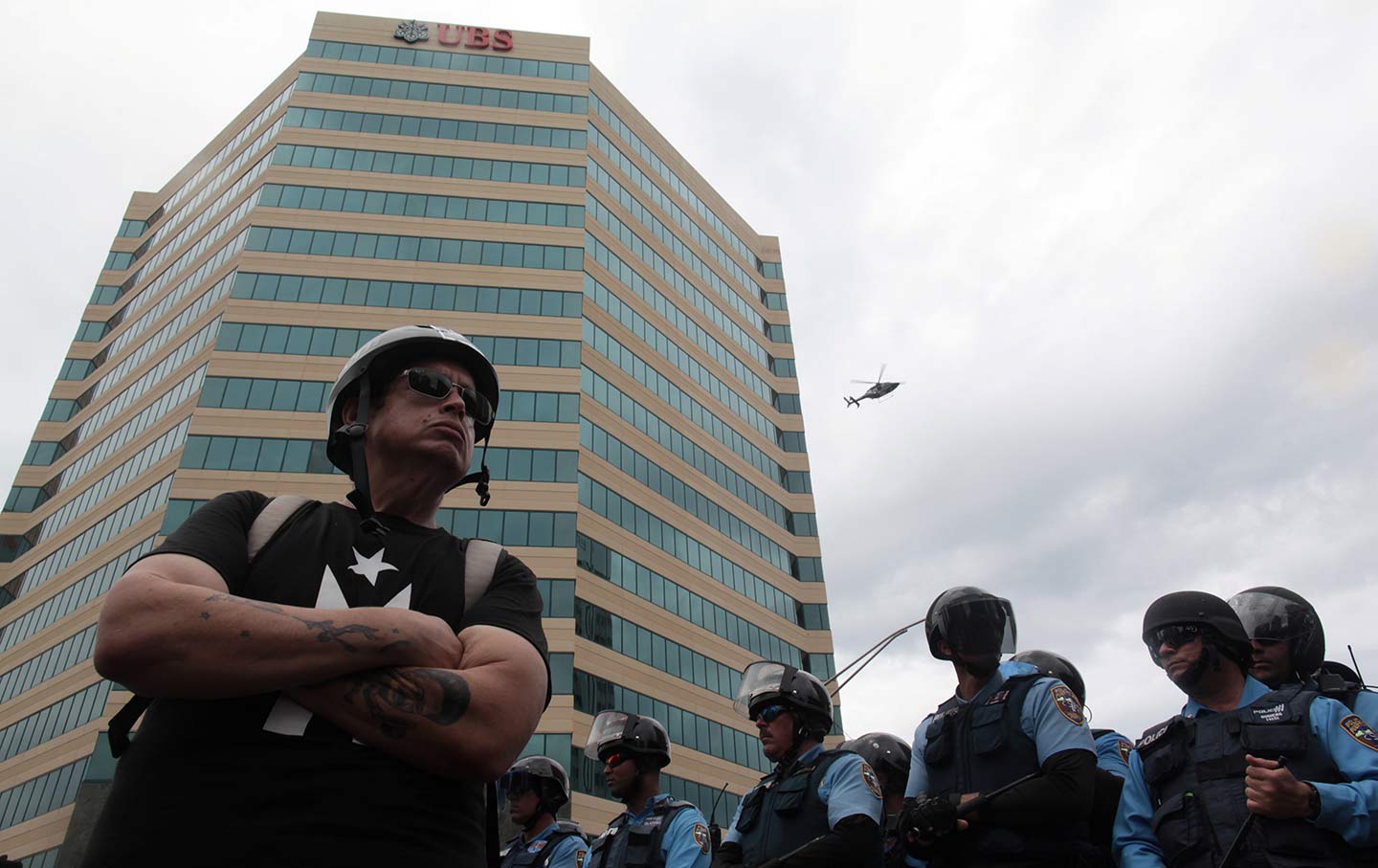 A demonstrator stands near police officers during a protest against the government’s austerity measures in San Juan, Puerto Rico, May 1, 2017. (Reuters / Alvin Baez)

Puerto Rico’s economic crisis has now washed the burden of its colonial legacy onto Washington’s doorstep. Congress has been trying to contain the island’s ballooning debt under the hardline austerity program of the Puerto Rico Oversight, Management, and Economic Stability Act (PROMESA). But since the program is governed by a control board run by the same financiers responsible for driving the debt crisis in the first place, the island continues to sink into poverty while its creditors feast on the spoils.

To underscore how Puerto Rico’s revolving door of big finance and politics is underwriting the debt crisis, a report by the AFL-CIO and the community-labor coalition Committee for Better Banks (CBB) traces the career of the head of PROMESA, Carlos M. García, from his role as a head banker of Santander to his current political post overseeing the privatization and pillage of Puerto Rico’s anemic public assets.

After a Century of American Citizenship, Puerto Ricans Have Little to Show for It

Starting around 2008, under the conservative Luis Fortuño administration, García was appointed to head Puerto Rico’s Government Development Bank (GDB) and its Public Private Partnerships Authority, two agencies designed to draw investment capital into the crumbling public sector. Bootstrapping his corporate cronyism with his governmental connections, he led the abrupt liquidation of an infrastructure fund known as the Corpus Account, a public financing vehicle for infrastructure projects aimed at upgrading the island’s dilapidated water and sewage systems to meet Federal Clean Water and Drinking Water Act. CBB argues that, despite the glaring conflict of interest, García had free rein to issue unsustainable bonds from 2009 to 2011, “his former employer, Santander, earned millions as a lead or participating underwriter in these transactions.”

As Puerto Rico’s economy cratered, the crumbling and underfunded sanitation system were left running on a stack of IOUs, and exacerbated the public health emergency sparked by the Zika virus last year, which left countless vulnerable newborns exposed to unsafe water and sewage systems.

Following the commonwealth’s massive default on rescue loans last year, Congress continues to ignore Puerto Rican civil-society groups’ calls for debt relief, while allowing PROMESA to lord over the colonial equivalent of an underwater mortgage. Under a high-risk-bonds scheme that García managed, according to the HedgeClippers analysis, “the amounts due when the bonds mature can be 10 or more times the amount originally borrowed,” and overall, an estimated three-quarters of the debt simply cannot be repaid. Whatever is paid back, moreover, largely won’t ever be reinvested in local communities, but instead just be reabsorbed by Wall Street financiers.

The privatization scheme coincided with a crisis over the fallout from the selloff of the telephone company to Verizon and other investors. The subsequent destabilization of contracts and pension benefits triggered protests from 50 labor unions, representing public and private sector workers who have suffered massive job losses under the austerity regime.

The Corpus Account was eventually whittled down from over $1 billion to just $300 million, and even that sum remained frozen in a GDB account and unusable for any remediation projects. Another chunk went to prop up public workers’ pensions, which were hobbled by another bond scheme that Santander and other banks had facilitated in 2008.

Report coauthor Molly McGrath says the attack on the infrastructure fund reflects not only rampant self-dealing throughout the banking industry but also an underlying ideological agenda of privatization.

While the government racked up toxic debt by churning out unsustainable capital appreciation bonds, “they had to have known when they were issuing them that they would never be able to pay them.” As an accessible major source of capital, the sewage project funds were a ripe target for García’s public-private partnership authority, which used the financial crisis as a pretext for “ask[ing] the private sector to take the role of basically financing the public infrastructure.”

Along with campaigning to end Puerto Rico’s debtor’s prison, CBB has also denounced Santander’s corporate malfeasance in its mainland financial services and workplaces. The company has in recent months been hit with scandals over usurious auto loans, and faced protests from bank workers over exploitative conditions that fuel unethical business practices. (García, too, remains embedded in Big Finance, with ties to a retail-credit firm known for issuing predatory payday loans.)

Puerto Rico’s financial chaos is compounded by its territorial status, which imposes all the oppression of a colony and none of the fiscal independence, excluding it from official bankruptcy protections, though PROMESA offers conditional relief in exchange for brutal fiscal cutbacks.

Puerto Rico illustrates the most extreme form of neoliberal restructuring that has been imposed on many US cities following the recession. Detroit was similarly devastated by what University of California–Berkeley’s Haas Institute calls “financial governance,” a modern-day plutocracy that drives “the systemic political neglect of entire groups of people and places.” Puerto Rico, however, is even more constrained, since municipalities can at least seek formal bankruptcy relief.

Drawing analogies with the brutal austerity programs imposed on Greece and other debt-strapped European nations, the CBB report concludes only “direct economic stimulus,” not a mounting powder keg of public debt, nor a one-time federal bailout, would provide a sustainable economic structure for the island. Given that the island is recovering not just from recession but from centuries of colonial dispossession, McGrath argues, “They need money flowing into the economy. They’re not going to get out of the crisis just with austerity alone.”

If the island does break out of debt, it will depend on whether its labor and pro-independence groups advocates can advance ideas for an alternative economic agenda, including plans for restoring public-sector jobs and fostering renewable-energy development. Meanwhile, the movement for territorial autonomy continues to stir, and Puerto Rican citizens will have a chance to express their discontent, and perhaps renew their cry for real independence in the upcoming June 11 status referendum.

Nonetheless, even if they get away with colonial pillage today, in the long run privateers like García will have even more to answer for to the next generation of Puerto Ricans, whose futures are already foreclosed by today’s debt disaster. The crisis in Puerto Rico, an abandoned colonial outpost, represents a dangerous economic horizon that communities across the United States are now approaching. As Trump and the Republican Congress press more austerity and corporate deregulation in Washington, they’re resurrecting the ghosts of the island’s imperialist legacy in a 21st-century neoliberal agenda.