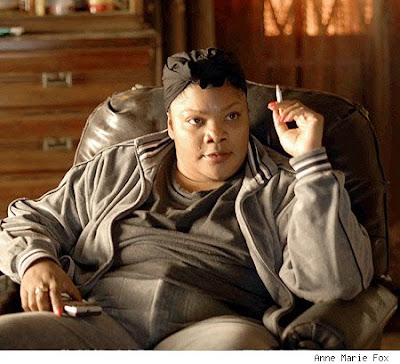 With Michelle Obama in the White House, consciously and conspicuously serving as mom-in-chief, I expected (even somewhat dreaded) a resurgence of Claire Huxtable images of black motherhood: effortless glamour, professional success, measured wit, firm guidance, loving partnership, and the calm reassurance that American women can, in fact, have it all.

Instead the news is currently dominated by horrifying images of African American mothers.

Most ubiquitous is the near universally celebrated performance of Mo’Nique in the new film Precious. Critically and popularly acclaimed Precious is the film adaption of the novel Push. It is the story of an illiterate, obese, dark-skinned, teenager who is pregnant, for the second time, with her rapist father’s child. (Think The Color Purple in a 1980s inner-city rather than 1930s rural Georgia)

At the core of the film is Precious’ unimaginably brutal mother. She is an unredeemed monster who brutalizes her daughter verbally, emotionally, physically and sexually. This mother pimps both her daughter and the government. Stealing her daughter’s childhood and her welfare payments.

Just as Precious was opening to national audiences a real-life corollary emerged in the news cycle, when 5-year-old Shaniya Davis was found dead along a roadside in North Carolina. Her mother, a 25-year-old woman with a history of drug abuse, has been arrested on charges of child trafficking. The charges allege that this mother offered her 5-year-old daughter for sex with adult men.

Yet another black mother made headlines in the past week, when U.S. soldier, Alexis Hutchinson, refused to report for deployment to Afghanistan. Hutchinson is a single mother of an infant, and was unable to find suitable care for her son before she was deployed. She had initially turned to her own mother who found it impossible to care for the child because of prior caregiver commitments. Stuck without reasonable accommodations, Hutchinson chose not to deploy. Hutchinson’s son was temporally placed in foster care. She faces charges and possible jail time.

These stories are a reminder, that for African American women, reproduction has never been an entirely private matter.

Nobel Laureate, Toni Morrison, chose the stories of enslaved black mothers to depict the most horrifying effects of American slavery. In her novel, Beloved, Morrison reveals the unimaginable pain some black mothers experienced because their children were profitable for their enslavers. Enslaved black women did not birth children; they produced units for sale, measurable in labor contributions. Despite the patrilineal norm that governed free society, enslaved mothers were forced to pass along their enslaved status to their infants; ensuring intergenerational chattel bondage was the first inheritance black mothers gave to black children in America.

As free citizens black women’s reproduction was no longer directly tied to profits. In this new context, black mothers became the object of fierce eugenics efforts. Black women, depicted as sexually insatiable breeders, are adaptive for a slave holding society but not for the new context of freedom. Black women’s assumed lasciviousness and rampant reproduction became threatening. In Killing the Black Body, law professor, Dorothy Roberts, explains how the state employed involuntary sterilization, pressure to submit to long-term birth control, and restriction of state benefits for large families as a means to control black women’s reproduction.

At the turn of the century many public reformers held African American women particularly accountable for the "degenerative conditions" of the race. Black women were blamed for being insufficient housekeepers, inattentive mothers, and poor educators of their children. Because women were supposed to maintain society’s moral order, any claim about rampant disorder was a burden laid specifically at women’s feet.

In a 1904 pamphlet "Experiences of the Race problem. By a Southern White Woman" the author claims of black women, "They are the greatest menace possible to the moral life of any community where they live. And they are evidently the chief instruments of the degradation of the men of their own race. When a man’s mother, wife, and daughters are all immoral women, there is no room in his fallen nature for the aspirations of honor and virtue…I cannot imagine such a creation as a virtuous black woman."

Decades later, Daniel Patrick Moynihan’s 1965 report "The Negro Family: The Case for National Action" designated black mothers as the principal cause of a culture of pathology, which kept black people from achieving equality. Moynihan’s research predated the 1964 Civil Rights Act, but instead of identifying the structural barriers facing African American communities, he reported the assumed deviance of Negro families.

This deviance was clear and obvious, he opined, because black families were led by women who seemed to have the primary decision making roles in households. Moynihan’s conclusions granted permission to two generations of conservative policy makers to imagine poor, black women as domineering household managers whose unfeminine insistence on control both emasculated their potential male partners and destroyed their children’s future opportunities. The Moynihan report encouraged the state not to view black mother as women doing the best they could in tough circumstances, but instead to blame them as unrelenting cheats who unfairly demand assistance from the system.

Black mothers were again blamed as the central cause of social and economic decline in the early 1990s, when news stories and popular films about "crack babies" became dominant. Crack babies were the living, squealing, suffering evidence of pathological black motherhood and American citizens were going to have to pay the bill for the children of these bad mothers.

Susan Douglass and Meredith Michaels, authors of The Mommy Myth explain that media created the "crack baby" phenomenon as a part of a broader history that understands black motherhood as inherently pathological. They write: "It turned out there was no convincing evidence that use of crack actually causes abnormal babies, even though the media insisted this was so…media coverage of crack babies serves as a powerful cautionary tale about the inherent fitness of poor or lower class African American women to be mothers at all."

This ugly history and its policy ramifications are the backdrop against which these three contemporary black mother stories must be viewed.

Undoubtedly Mo’Nique has given an amazing performance in Precious. But the critical and popular embrace of this depiction of a monstrous black mother has potentially important, and troubling, political meaning. In a country with tens of thousands of missing and exploited children, it is not accidental that the abuse and murder of Shaniya Davis captured the American media cycle just as Precious opened. The sickening acts of Shaniya’s mother become the story that underlines and makes tangible, believable, and credible the jaw-dropping horror of Mo’Nique’s character.

And here too is Alexis Hutchinson. As a volunteer soldier in wartime, she ought to embody the very core of American citizen sacrifice. Instead she is a bad black mother. Implied in the her story is the damning idea that Hutchinson has committed the very worse infraction against her child and her country. Hutchinson has failed to marry a responsible, present, bread-winning man who would free her of the need to labor outside the home. Hutchinson does not stay on the home front clutching her weeping young child as her man goes off to war. Instead, she struggles to find a safe place for him while she heads off to battle. Her motherhood is not idyllic, it is problematic. Like so many other black mothers her parenting is presented as disruptive to her duties as a citizen.

It is worth noting that Sarah Palin’s big public comeback is situated right in the middle of this news cycle full of "bad black mothers." Palin’s own eye-brow raising reproductive choices and parenting outcomes have been deemed off-limits after her skirmish with late night TV comedians. Embodied in Palin, white motherhood still represents a renewal of the American dream; black motherhood represents its downfall.

Each of these stories, situated in a long tradition of pathologizing black motherhood, serves a purpose. Each encourages Americans to see black motherhood as a distortion of true motherhood ideals. Its effect is troublesome for all mothers of all races who must navigate complex personal, familial, social, and political circumstances.