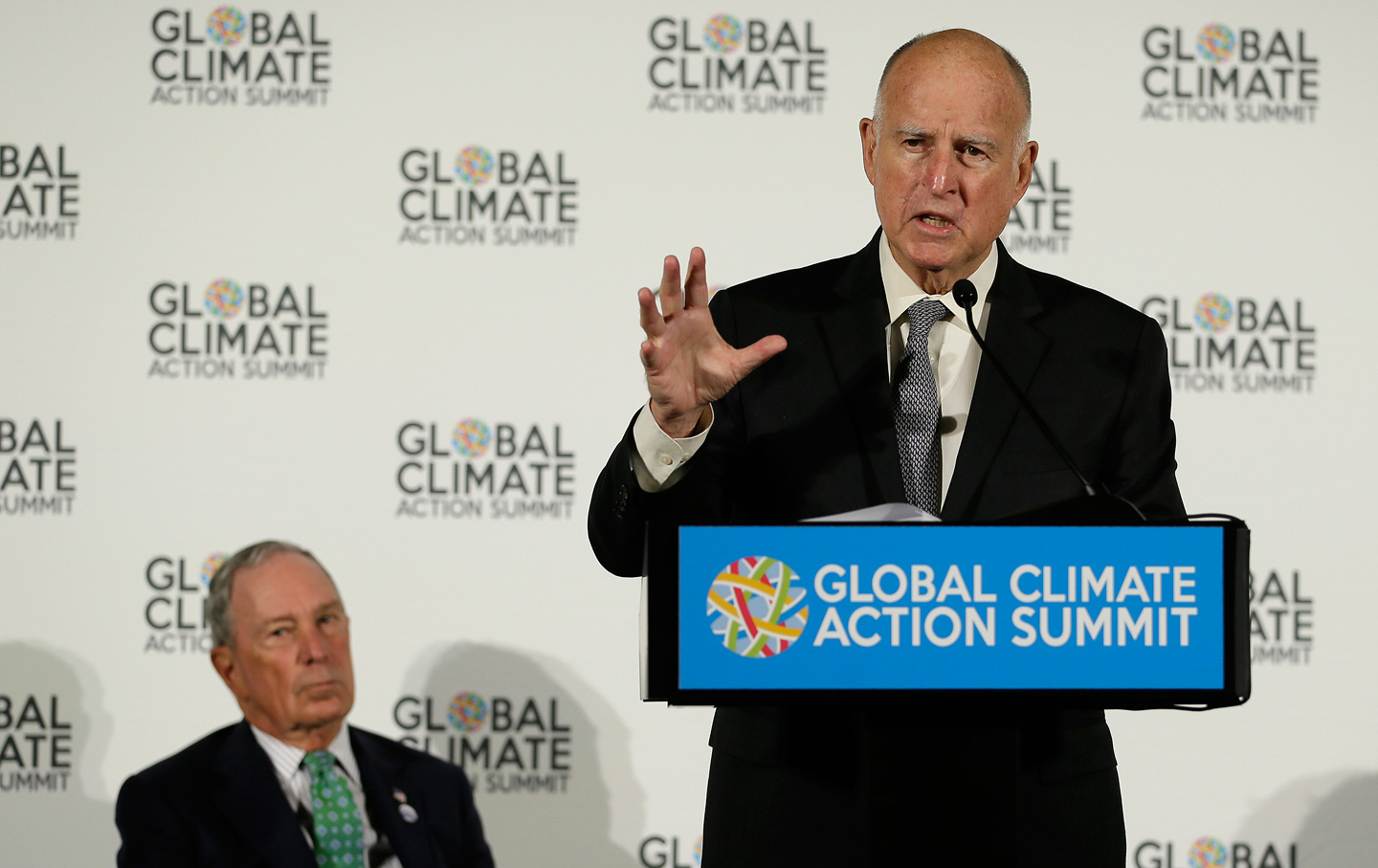 With Hurricane Florence threatening to “kill a lot of people” in the Carolinas, California Governor Jerry Brown opened the Global Climate Action Summit in San Francisco on Thursday by heralding extremely ambitious new steps against climate change and denouncing President Donald Trump’s climate policies as those of a “liar, a criminal, a fool.”

“I’ve signed an executive order that calls for California to achieve zero carbon emissions by 2045,” Brown told a press conference. The executive order goes significantly beyond the SB 100 bill, which Brown signed into law on Monday before also signing the order. While SB 100 commits the state—the world’s fifth-biggest economy—to obtain 100 percent of its electricity from non-carbon sources by 2045, the executive order’s ambition extends beyond the electricity sector to the California economy as a whole, including transportation, buildings, agriculture, and more. Together, the two measures put California on the record with by far the most ambitious climate target of any major power on earth.

“We’re getting it done but we have a very tall mountain to climb,” Brown said, adding, “The metaphor I use is, we’re at the base camp of Mount Everest, and we’re looking up at the long way we still have to go.”

Asked how Trump’s climate legacy will be seen in years to come, the California governor blasted the Trump administration’s decision this week to allow more emissions of methane, the super-potent greenhouse gas that traps at least 20 times more heat than carbon dioxide does. “It borders on not only insanity but criminality,” said Brown, adding, “On the path he’s on, he’ll be remembered as, what: Liar? Criminal? Fool? Take your pick.”

“After the White House announced its intention to pull out of the Paris Agreement last year, leaders from across the country came together to say, ‘We’re still in,’” Michael Bloomberg, the United Nation’s special envoy for climate action and co-chair of the summit, told the press conference. The “We’re Still In” partnership that Bloomberg and Brown organized in the wake of Trump’s announced withdrawal from the Paris Agreement in June 2017 now includes 17 states and 400 cities that collectively represent the third-largest economy on earth and whose leaders have pledged to work together to meet the Paris goal of limiting global warming to “well below” 2 degrees Celsius. “Today, we announce that this ‘bottom up’ movement will put us within striking distance of the US commitment to the Paris Agreement, even with zero support from our federal government,” said Bloomberg.

Bloomberg said that he “will be getting involved” in the midterm elections through his own campaign contributions, hoping to help the Democrats flip the House of Representatives. Criticizing the Trump administration’s recently announced policy of encouraging additional coal burning, despite the administration’s own calculations showing that it will mean an additional 1,400 premature deaths every years, Bloomberg said, “Think about that: 1,400 babies are going to die prematurely every year because of an unnecessary action by the EPA.”

“We expect to spend about $80 million” on the midterm elections, Bloomberg told The Nation. “Republicans have had two years to show that they could govern, and they have failed. Over the next six weeks I’ll be supporting candidates who are taking action on climate change and other issues, including gun violence.” Addressing the summit plenary, Bloomberg added, “This should serve as a wake-up call to members of Congress that they had better start taking this issue seriously, or voters will send them packing.”

Eric Garcetti, the mayor of Los Angeles, was pleasantly surprised by Brown’s executive order committing California to carbon neutrality by 2045. “Los Angeles is now the third-largest metropolitan area in the world behind New York City and Tokyo,” said Garcetti. “We have capped our greenhouse-gas emissions, and now they’re declining. Our citizens’ carbon footprint is one-third the footprint of the average American. We committed back in March to achieve carbon neutrality by 2050, but I’m excited to see [the governor] commit the state to moving even faster than that.” Asked to comment on Brown’s statement about Trump’s climate legacy as “a liar, criminal or fool,” Garcetti told The Nation, “Donald Trump will be a footnote of history, the last member of the Flat Earth Society, a man who created problems that the rest of us are solving.”

Back in Washington, the head of the US Federal Emergency Management Administration, Brock Long, told reporters that hurricane Florence will dump “feet, not inches, of rain” on the Carolinas and Virginia. Considerable inland flooding will result, Block predicted, adding, “Inland flooding kills a lot of people unfortunately, and that’s what we’re about to see.”

Climate change is directly worsening the potential impact of Hurricane Florence, according to a peer-reviewed scientific study released on Wednesday. “We find that rainfall will be significantly increased by over 50 percent in the heaviest precipitating parts of the storm,” reported Mark Risser and Michael Wehner of the Lawrence Berkeley National Laboratory and Alyssa Stansfield of the State University of New York at Stony Brook. ”This increase is substantially larger than [would be] expected from thermodynamic considerations alone. We further find that the storm will remain at a high category on the Saffir-Simpson scale for a longer duration and that the storm is approximately 80 kilometers in diameter larger at landfall because of the human interference in the climate system.”

Mia Mottley, the prime minister of Barbados, opened the formal summit proceedings by declaring that a separate storm, Hurricane Isaac, “nearly prevented me from being here today.” Issac shifted course at the last minute, continued the prime minister, sparing Barbados from serious damage. “We were lucky today,” said the prime minister. “But is it fair that the livelihoods of our people depend on staying lucky?”

“I can only say this: We were elected to lead, not to pander, not to follow, and not to hold up a wet finger to the wind. So let’s lead,” Frank Bainimarama, the prime minister of Fiji, told the summit. “Ask yourself: ‘If I could solve this climate crisis, knowing that it would come at the cost of my political career, would I do it?’ As far as I am concerned, there is only one answer.”

“We feel neglected by the world,” Sayeed Khokon, the mayor of Dhaka, Bangladesh. “I am the mayor of one of the most populated cities in the world. Our nation has not participated very significantly in the emissions of greenhouse gases, but we are the most affected nation in the world by climate-change impacts—flooding, river erosion, and storms.” The impacts are driving inhabitants of rural areas in Bangladesh to the cities; an estimated 5,000 arrive in Dhaka daily. The national government has begun a program to help migrants return to their homes by providing free government-owned land and housing. But to truly address the problem, Mayor Khoko added, “we would really appreciate President Trump playing an active role.”

“We are facing the great moral crisis of our time, that those who are least responsible [for climate impacts] will bear the greatest costs,” actor Harrison Ford told the summit. “We need to stop electing people who don’t believe in science, or who claim not to believe in science for their own self-interest. If we are to survive on this planet…we need nature, now more than ever. Nature doesn’t need nature; people need nature. So let’s turn off our phones, let’s roll up our sleeves, and let’s kick this monster’s ass.”