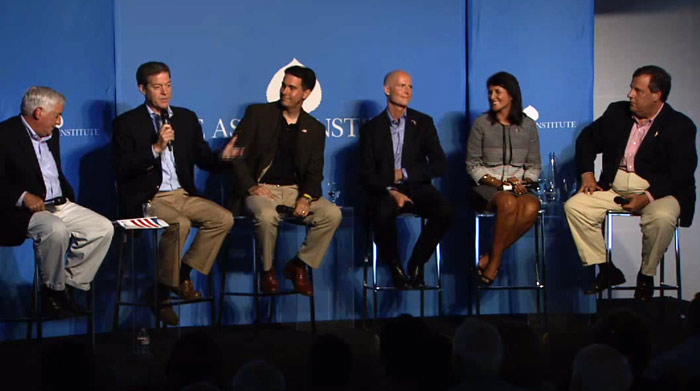 You never know what might happen when a bunch of Republican governors get together to discuss policy and politics. Well, actually you do kinda know: that they’ll make asses out of themselves, and at great length. So it was with some trepidation and some glee that your faithful Christie Watchers took a look at the discussion at the Aspen Institute bringing together five GOP governors: Chris Christie of New Jersey, Rick Scott of Florida, Nikki Haley of South Carolina, Scott Walker of Wisconsin and Sam Brownback of Kansas. Two of them, Christie and Walker, are potential GOP candidates in 2016, and Haley might be positioning herself as a vice presidential candidate.

What’s interesting about the discussion is that not a single one of the five panelists tried to pick up on anything that has emerged so far from the hubbub over “reform conservatism” (see Part I, Part II and Part III of Christie Watch’s recent examination of the reformicons) and Wisconsin Representative Paul Ryan’s recent, errant foray into poverty and “opportunity,” even though the moderator asked the panel specifically about Ryan’s proposal. Maybe it’s too early to draw any conclusions, but it sure looks like the Republican party hasn’t gotten the memo that it’s supposed to be “kinder and gentler” (as George H.W. Bush might say) or more “compassionately conservative” (as George W. Bush might say). It’s still your grandfather’s GOP.

Brownback went first, asked about Ryan’s ideas, and he launched into a long defense of his own program in Kansas, which centered on austerity, tax cuts and other GOP touchstones. Brownback, running for re-election, and about to get a visit from Christie, put into place a wide range of cuts after the GOP solidified its majority in Kansas, but oops!—as Rick Perry might say—it all backfired, causing huge economic problems in the Sunflower State and leading more than a hundred Republican moderates to endorse Brownback’s Democratic opponent. But none of that stopped the ultra-right Brownback from claiming that Ryan is trying to lead the “pro-growth wing of the party”—“you’ve got to cut taxes in a way that creates growth”—raising his hand and saying with a goofy grin, “I’m in that wing of the party!” No, governor, you’re not. You’re in the wing of the party that even your fellow Kansas Republicans say wrecked your state. When the panel’s moderator noted that Brownback’s policy had led to a $300 million shortfall, Brownback’s response was: “We cut taxes in order to put that money back into private business.” For good measure, Brownback attacked the “vast-left wing conspiracy” for its criticism of his efforts to dismantle Kansas’ entire public sector. But the moderator persisted, saying that Kansas’ employment is lagging behind its neighbors, and that growth is slow, asking Brownback if he planned any adjustments. “I don’t see it,” said Brownback.

Walker went next. He is, of course, the governor who provoked a statewide revolt, mass demonstrations by union members and others, and an impeachment-style recall election over his brutal assault on state workers. Walker, too, like Paul Ryan’s plan. “We’re ahead of the curve,” he bragged. Well, yes, if the curve involves triggering statewide protests unprecedented in recent American history. And Walker essentially argued that he’s making Wisconsin job-friendly, and investment-friendly, by driving down wages. Which, of course, makes Wisconsin the would-be “China” of American states.

Next came Rick Scott, the much-reviled governor of Florida who used to run a gigantic, nationwide hospital system, then called Columbia/HCA, which paid $1.7 billion in what was then the biggest fine in US history for bilking Medicare out of billions of dollars. Scott, too, bragged about vast tax cuts. “We’ve cut taxes every year,” said Scott. “It actually works really well.” And if you’re in the 1 percent, it does. Higher taxes, Scott said, drive people to leave the state—the bogus argument made against New York City’s Mayor Bill de Blasio over his proposed tax hikes on the rich. He was followed by Haley, who slammed “both Republicans and Democrats” in Congress for the gridlock in Washington—except for Paul Ryan, of course. She described South Carolina’s recent efforts to undermine the state’s welfare program.

Then came Christie. “First off, I agree with everything that’s been said by my four colleagues,” he said. Now, the problem that Christie has is that the can’t tout New Jersey’s economic progress, because there is none—and that’s a terrible selling point for a presidential candidate. Things are a mess in New Jersey, and thanks to Christie its public pension system is spiraling downwards once again, caused by his proposed cuts on pension spending, even as the state’s bond ratings have been continually downgraded by bond agencies. Thus, as The Wall Street Journal’s Heather Haddon reports, in a piece entitled “New Jersey’s Weak Economy Opens Christie Up to Political Attacks on the Road,” Christie is under fire across the country even from Republicans over New Jersey’s poor economic performance. Reports the Journal:

The state’s bond rating is among the worst in the nation. More than 8% of the state’s home loans are in foreclosure, according to a May report by the Mortgage Bankers Association. Job growth has lagged behind neighboring states, even as Mr. Christie has pushed aggressive tax and business incentives. And after catapulting to national renown in 2011 by promising to fix his state’s pension system, the governor said earlier this spring he would forgo about $2.4 billion in promised payments over two years, citing a weak economy. Moody’s Investors Service has downgraded the state’s debt twice, rating it as the country’s second lowest, after Illinois’s. More downgrades could be on the horizon, said Baye Larsen, the firm’s lead New Jersey analyst, citing the state’s weighty pension obligations and slower growth.

The discussion veered off into education policy—and Christie Watch will report more extensively on Christie’s education policy, including attacks on teachers and support for Wall Street–backed charter schools later this week—the panel moved on to healthcare. The moderator, to his credit, noted that in all five states represented by the panelists there were no state-run health insurance exchanges, under the terms of the hated Affordable Care Act, which in turn might jeopardize Medicaid in those states. Scott noted proudly that he “built a large hospital company” (that would be the crooked one that paid that $1.7 billion fine for wrongdoing), adding, “Obamacare is a disaster”—and then actually had the nerve to say that “Medicare Advantage is being raided,” which is ironic, at least, coming from someone who’s own firm gleefully “raided” Medicare to the tune of billions of dollars in overbilling.

No, thank you, said Scott, Florida won’t be setting up any insurance exchanges. Added Walker, “We’ve gotta repeal it.”

Near the end of the session, in response to a Republican questioner who said he was tired of Republicans being too extreme on social issues, Christie—who began by saying that he’s “pro-life”—delivered a long riff on how the GOP ought not to change any of its positions on social issues but can win simply by presenting its views differently and pretending to be “listening” to people who disagree: “I don’t think we’re being pounded because of the social issues. We’re getting pounded because of the way we present ourselves. People want folks who are authentic and who believe what they say is true, but also are willing to be tolerant and listen to others’ points of view. You’ll get some folks who’ll say that if you’re willing to listen that somehow you’re weak on your own principles. That’s absolutely garbage. I have plenty of people in my state who vote for me who have significantly different opinions than mine on some of these issues.… The reason is that they think I’m listening to them.… We’ve lost for a whole bunch of reasons over the last two cycles, and I think that the social issues is an absolutely minor one. Some folks will say that we lose the women’s vote because of that. Well I got 56 percent of the women’s vote and I didn’t change my positions one iota. Did they forget? No. They made a holistic evaluation.”