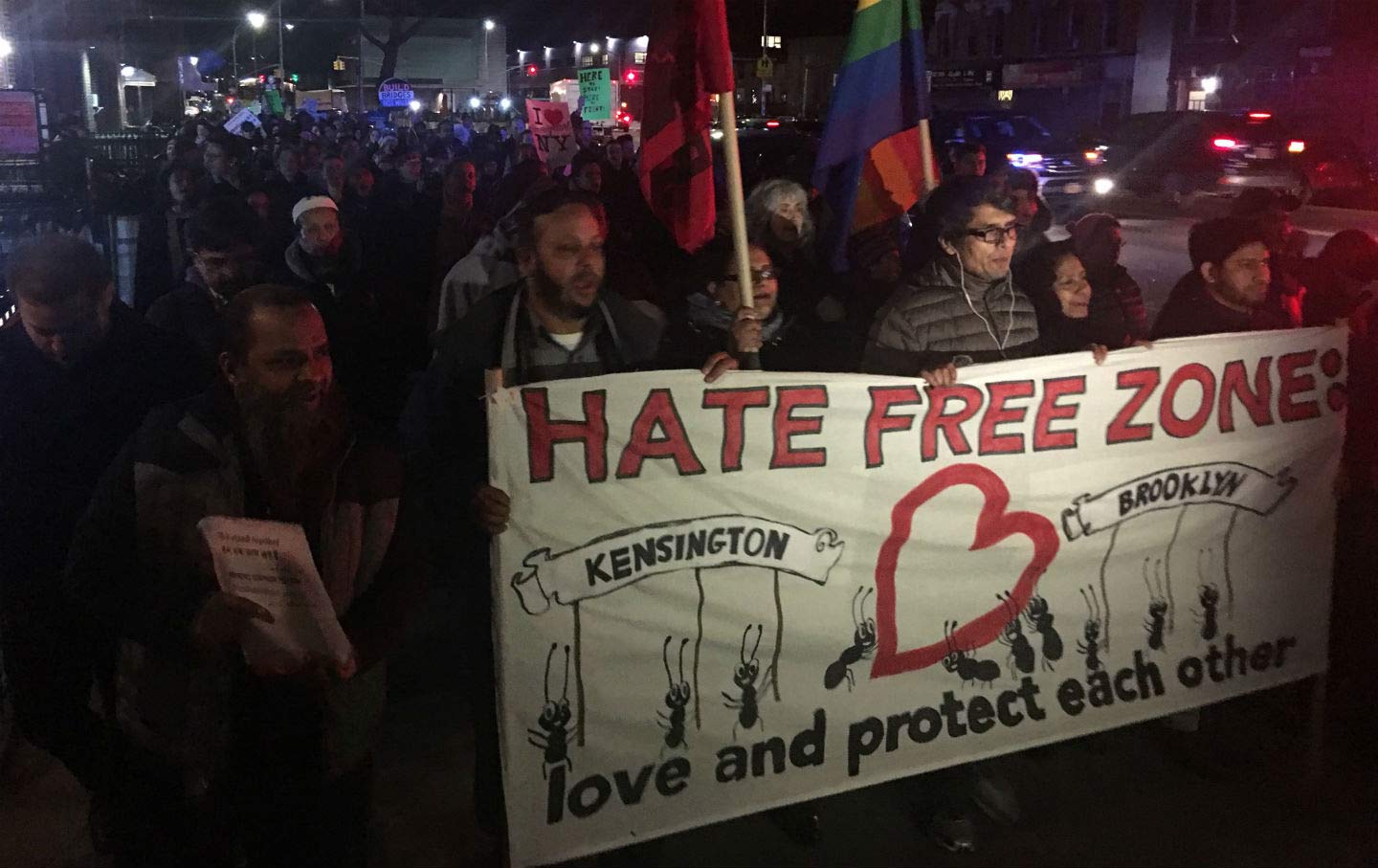 Attendees march in support of sanctuary cities in Brooklyn, New York, on January 25, 2016. (Courtesy of Desis Rising Up and Moving)

That was the rallying cry last night in Kensington, a multiethnic, largely immigrant neighborhood in central Brooklyn. On the heels of President Trump’s executive orders cracking down on illegal immigration, residents of Kensington and elsewhere in Brooklyn gathered to announce the launch of a “Hate Free Zone” and community defense network.

The rally was organized by Desis Rising Up and Moving (DRUM), a grassroots community organization of working-class South Asians in Brooklyn and Queens (“desi,” from Hindi, means a South Asian expatriate). Residents of Kensington hope the Hate Free Zone will create a robust grassroots network that can respond to any threats against vulnerable members of the community.

“While our communities have been facing violence and oppression for years, we are now in a critical moment in history,” said Israt Audry, a member of DRUM and an undocumented immigrant who has lived in the United States with her family for the past 16 years.

Having immigrated as a minor, Audry is one of the nearly 800,000 young people who have benefited from the Obama administration’s Deferred Action for Childhood Arrivals policy (DACA). The policy allowed Audry to work legally in this country and thus guaranteed her the right to earn at least the minimum wage, making her the breadwinner for her family. DACA may soon be on President Trump’s chopping block.

“By declaring this community a Hate Free Zone, we are committing to the practice of building a community defense system that will defend our communities from workplace raids, deportations, mass criminalization, violence, and systemic violations of our rights and dignity,” Audry told the crowd.

Even with a larger emergency rally of several thousand in Manhattan’s Washington Square Park happening at the same time, the Kensington Hate Free Zone launch drew a crowd of nearly 400 people. Many in the crowd were South Asian residents of the neighborhood, while others came from across Brooklyn to support the initiative. South Asians are the largest immigrant group in Kensington, according to the latest Census figures, and the rally took place in a part of Kensington sometimes known as Little Bangladesh.

In addition to signs supporting immigrants and immigrant rights, demonstrators had signs supporting Black Lives Matter and opposing homophobia. Organizers made a point of emphasizing that the Hate Free Zone is a stand against all forms of bigotry. Cars, trucks, and one MTA bus driving by honked in support at the busy intersection where the rally was held, a South Asian grocer on one corner and a mosque on the other.

“I’m here because I want my neighbors to know I love and care about them,” said Amparo Abel-Bey, a member of Jews for Racial and Economic Justice from Windsor Terrace, a nearby neighborhood. “In this Hate Free Zone we all have to keep our eyes out for one another.”

The president is expected to sign more executive orders today, among them one halting immigration from certain Muslim-majority countries. His campaign trail call for a registry of Muslims could also be advanced in the coming days. Critics warn that in addition to separating families and hindering economic opportunity for immigrants, Trump’s actions could lead to an increase in anti-immigrant and anti-Muslim hate crimes.

“We have already seen an unprecedented spike in anti-Muslim bigotry in recent months,” said Nihad Awad, executive director of the Council on American-Islamic Relations at a press conference yesterday. “The negative perceptions and association created by these orders will very likely cause a further increase in hate crimes, discrimination, and bigotry against ordinary law-abiding American Muslims.”

For that reason, many attendees last night feel that the Hate Free Zone’s community defense is necessary, to protect them both from federal agencies as well as from individual acts of violence and harassment.

“What’s really important about what DRUM is doing is that first and foremost it is led by brown and Muslim and undocumented communities.” Thanu Yakupitiyage, Communications Manger for the New York Immigration Coalition, told The Nation. “These Hate Free Zones that they’re organizing are tangible ways that people and businesses and neighborhoods can pledge and commit to ensuring that their communities are safe.”

According to a report released two weeks ago by the New York City Comptroller’s office, there are 3.3 million immigrants in the city—40 percent of the city’s population. Those immigrants contribute $8 billion in city and state income tax every year. They are also job creators, owning 51 percent of all of the city’s businesses.

“We have not just a moral imperative to be true to our values and stand up to anti-immigrant policies, but an economic imperative as well,” said Comptroller Scott Stringer in a statement. “The contributions that immigrants make to our economy are enormous.”

One speaker at the rally, Sohel Mahmud, a construction worker who immigrated from Bangladesh in August 2015, drew attention to the fact that business owners in the city depend on immigrant labor.

“Those of you who thought only undocumented people will be impacted, there is bad news for you,” he said. “If undocumented immigrants and workers are deported, who will you bring to work in their place?”

Immigrants comprise 46 percent of the city’s workforce, per the comptroller’s report. Construction is one of the most heavily dependent on the labor of immigrants, with 64 percent of workers born outside the United States.

Elected officials representing Kensington at the city and state level also spoke at the rally. Brad Lander, the city councilman who represents Kensington, began with a call and response of the inscription on the Statue Of Liberty: “Give me your tired, your poor, your huddled masses yearning to breathe free.” He then went on to criticize what he called the “vile xenophobia” emanating from Washington.

“Until now it’s kind of felt like pre-game, we were getting organized, but it’s all been symbolic. But now it’s getting very serious,” Lander told The Nation. “I think the model that DRUM has of organizing these Hate Free Zones, which are deeply rooted in these communities, is powerful. Unfortunately, I think there’s a very real chance it will be tested.”

One particular consequence of Trump’s executive actions yesterday is the president’s plan to pull federal funding from “sanctuary cities,” cities such as New York that in a variety of ways offer safe harbor for illegal immigrants. Though some legal experts are questioning if Trump has the power to do so, if Trump cuts federal funding to New York, it could cost the city $7 billion.

Robert Carroll, the newly elected assemblyman from Kensington, specifically criticized the federal government for attempting to “blackmail” the city into accepting its immigration policies.

“Let your senators and your congress members know that if we are bullied by our federal government to go and persecute our own residents that we don’t want their federal dollars,” he told the crowd. “That we will push back and tell them no. Because being blackmailed and coerced into bigotry is not something that is acceptable in New York City.”

Speaking to The Nation after his speech, Carroll said that he hopes other sanctuary cities like Austin, Los Angeles, and Seattle can band together to resist Trump’s plans to cripple their budgets.

“If you say we’re going to revoke federal funding based on whether ICE agents can enter city jails to start deportation proceedings, it sets a terrible precedent,” he said. “I think we have to draw a pretty clear line in the sand that our values aren’t so easily bought.”

Nonetheless, organizers are bracing themselves for the possibility that the city goes back on its promise of being a sanctuary city.

“It’s crucial that the city live up to its commitments to protect immigrants,” said Yakupitiyage of the New York Immigration Coalition. “But we also need to protect ourselves. For example, making sure workplaces where workers have different immigration statuses have a plan if ICE comes around. Having communities empower themselves like DRUM is doing, creating protection plans for themselves is really important.”

The rally ended with a march through Little Bangladesh, where local business owners joined in on chants declaring their neighborhood a Hate Free Zone.

Going forward, DRUM will start coordinating activities in the Hate Free Zone, from self-defense and bystander intervention training to creating a rapid response plan to raids. The group is also thinking about how to leverage institutional power. Fahd Ahmed, DRUM’s executive director, says that he hopes they can eventually influence Washington or other national institutions.

But for now, organizers are going to keep building and strengthening the Hate Free Zone, in preparation for the day when the Trump administration does finally challenge them.

“We are staking out a line of defense,” said Ahmed. “We are building new kinds of communities that collectively refuse to cede ground to the Trump administration.”