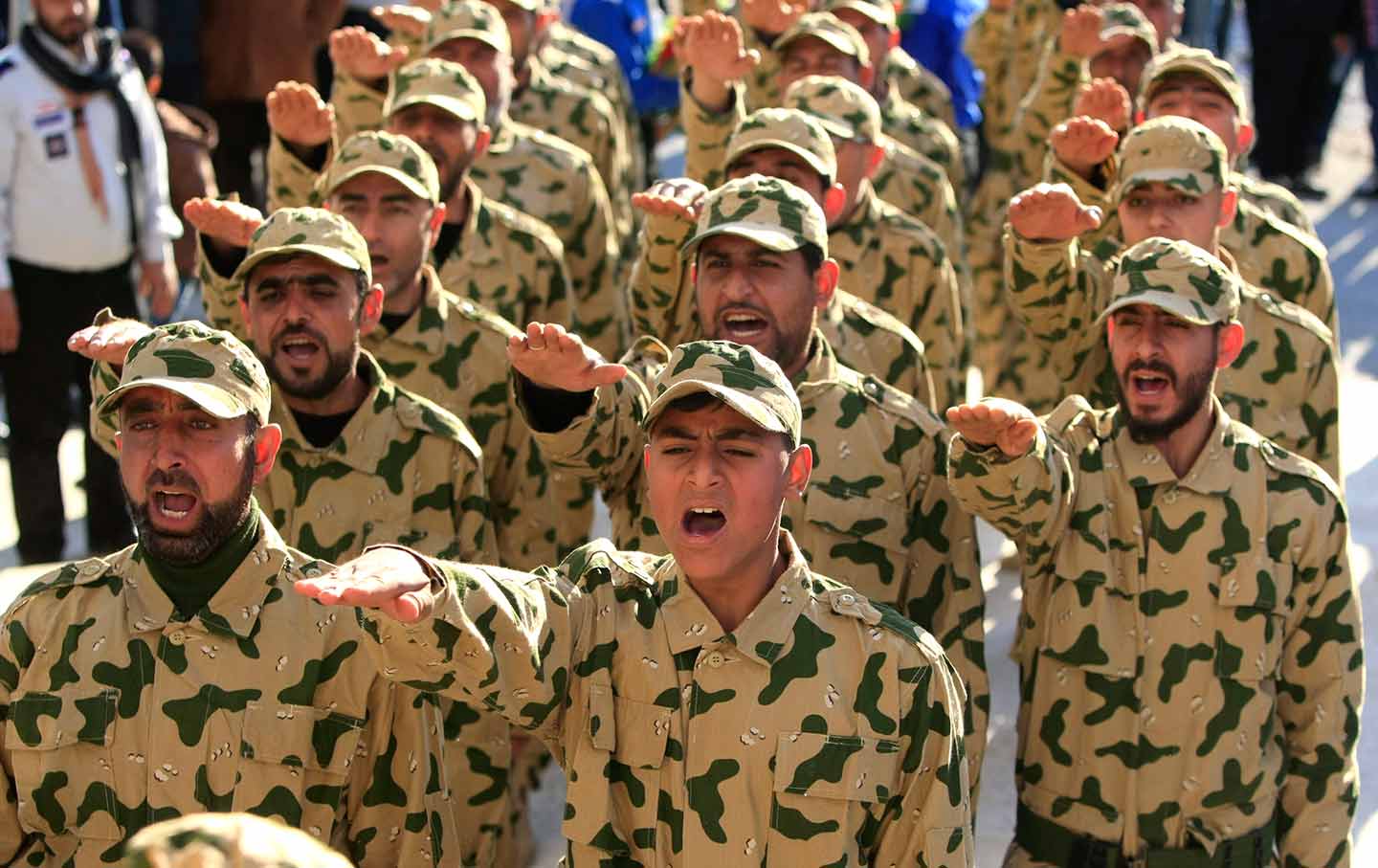 Lebanon-Israel border—Tensions between Israel and Hezbollah are on the rise again, and according to a Hezbollah commander based in southern Lebanon, the nature of their next conflict will be shaped by his organization’s gains in the Syrian civil war.1

Meeting in the rugged, mountainous Lebanese interior near the southern border, where occupying Israeli forces were driven out by Hezbollah in 2000 and suffered a second setback in the 2006 war, the commander feels emboldened by his Syrian spoils. “Commander Samir,” who declines to use his real name because he is not authorized to speak to the press, contends that his organization has moved new Russian anti-aircraft weapons and long-range missiles from Syria to this border region.2

“I can assure you we have a nice, shiny new anti-aircraft system to show them,” says Samir, referring to Hezbollah’s planned response to an Israeli aerial assault. “We’ve got heavy long-range missiles, directly from the Russians, that can hit anywhere in Israel.” He denied requests to see the weapons, citing security concerns.3

“We’ve got long-range missiles, directly from the Russians, that can hit anywhere in Israel.”—Hezbollah commander

While he boasts about Hezbollah’s reinforced military capability, Samir says war with Israel isn’t on the agenda at the moment. But he’s convinced that at some point there will be another round of conflict, one that will be very costly for both sides but one that his forces will win.4

It appears that Commander Samir’s goal in speaking to The Nation about the Party of God’s readiness to engage Israel is to send a message of deterrence. Friction in the south has been building for months, and includes claims of the Israeli navy firing at a Lebanese fishing boat in Lebanese waters, Israel’s removal of a Lebanese roadblock on the border, and Israeli soldiers forcefully dispersing protesters on the Lebanese side of the border fence.5

In February, Hezbollah leader Hassan Nasrallah gave a speech saying his forces could hit Israel’s nuclear reactor in Dimona—which is in the southern Negev Desert, far from the Lebanese border—while at the same time stating his belief that there would not be a war this year. Shortly afterward, Lebanese President Michel Aoun told Egyptian media that he saw Hezbollah’s arms as essential to Lebanon’s defense from Israel.6

Aoun, who owes his position to Hezbollah’s parliamentary coalition, is now a strong political ally of the Shiite movement. Even so, his open support of and confidence in an armed entity not under Lebanese army control was unprecedented. The statement was met by Israeli threats to strike anywhere in Lebanon if attacked.7

These tensions turned into open conflict in Syria in recent days after Israel carried out airstrikes on what Prime Minister Benjamin Netanyahu called “advanced weapons” destined for Hezbollah, and the Syrian government responded by firing anti-aircraft missiles at the intruders. Although Israel has often carried out strikes in Syria in recent years, mostly to target Hezbollah and its interests, this was the first time the Syrian government directly retaliated.8

One element in the hardening confrontation seems to be Hezbollah’s fear of the Trump administration’s hostility toward Iran and embrace of hardline Israeli politics, coupled with the Gulf States’ finding common cause with Israel in the regional polarization between Iran and Saudi Arabia. The commander, who describes rising through Hezbollah’s ranks since the 1980s, worries that Washington will now encourage an Israeli confrontation with Hezbollah as a way of fighting a proxy war with Iran.9

“Both sides are ready to have a fight in Syria, but not in Lebanon.” —Ahmad Moussalli, American University of Beirut

“Hezbollah is like the cane that Iran uses,” says Commander Samir, referring to his organization’s transformation from a domestic militia, before the Syrian war, to a regional fighting force engaged in conflicts from Yemen and Iraq to Syria on behalf of its main patron. “If the Americans want to break the Iranian cane, then the Israelis will attack Hezbollah.”10

Ahmad Moussalli, a political science professor and specialist in Islamic movements at the American University of Beirut, believes any expanding conflict between Israel and Hezbollah will play out in Syria rather than Lebanon. “A war in Lebanon will be very devastating for both sides,” says Moussalli. “Both sides are ready to have a kind of fight in Syria, but not in Lebanon. On the Syrian front, it’s a very different game.”11

When Israel invaded Lebanon in 2006, it achieved none of its military objectives, took heavy casualties, and left Hezbollah emboldened and admired across the Arab world for forcing an Israeli retreat for a second time in less than a decade. But the Israeli military killed more than 1,000 Lebanese civilians, wounded over 4,400, and displaced around 1 million people in a country with a total population of only 4 million at the time.12

Hezbollah emerged in the 1985 out of Lebanon’s civil war as a Shiite Islamist and nationalist movement that primarily fought Israel’s occupation of the country through guerrilla tactics. It has always received funding and support from Iran, often via Syria, but the militia’s growing role in the Syria conflict, where it has been crucial in turning the tide in the regime’s favor, has transformed its military wing into a highly trained and equipped conventional ground force with regional reach.13

Iran’s Quds forces, Iraqi militiamen, and Hezbollah all now have a military presence in Syria near the Golan Heights.

Now Hezbollah directly controls vast tracts of land in Syria, including in the south of the country near the Israeli border. Nasrallah has said his organization will maintain control of the land for the time being, while Commander Samir contends that it can be used to open a second front against Israel in the event of hostilities.14

Moussalli also notes this possibility, highlighting the fact that the Iranian Revolutionary Guard Corps’s Quds forces, Iraqi militiamen, and Hezbollah all now have a military presence on the Syrian side of the Golan Heights and are willing to fight there if needed.15

On the political side, the realignment of regional political forces resulting from the Syrian War seems to be shaping Hezbollah’s tensions with Israel—and its relations with old allies. On the one hand, Commander Samir argues that Arab states, primarily in the Gulf, that have supported Syrian rebels are interested in having Israel damage his organization; on the other, he no longer sees his fight as connected to the Palestinian struggle.16

“We don’t consider ourselves as allies with Palestinians [anymore],” Samir states firmly, expressing frustration with Hamas’s split with Iran, Hezbollah, and the Syrian regime in 2012, as the revolt in Syria turned into a civil war. It is a bold statement for a high-ranking official of a movement whose leader has always said he is also fighting to free Palestine. Indeed, Hezbollah’s longtime solidarity with the Palestinian cause served both the Shiite movement’s political interests in Lebanon as well as a common regional vision. For Palestinians, Hezbollah’s successful resistance to Israeli occupation was an inspiration for their own struggle.17

But most Palestinians have been sympathetic to the Syrian uprising and oppose the brutality and repression of Bashar al-Assad’s regime, which puts them in direct conflict with Hezbollah. While the regime has retained the loyalty of a few small Palestinian factions, Yarmouk, the large Palestinian refugee camp in Damascus, as well as other Palestinian camps in Syria have seen years of intense government bombardment and siege. (Yarmouk has also faced invasion and assault from ISIS and the formerly Qaeda-affiliated Nusra Front.)18

Since Israel’s 2014 war in Gaza, Iran has started providing some support to Hamas again and, according to the Samir, so has Hezbollah. Yet the war in Syria, he says, has changed his perspective not only on Hamas but also on general Palestinian aspirations. “The reason that we are supporting them now,” he says, “is because they are an enemy of my enemy.”19