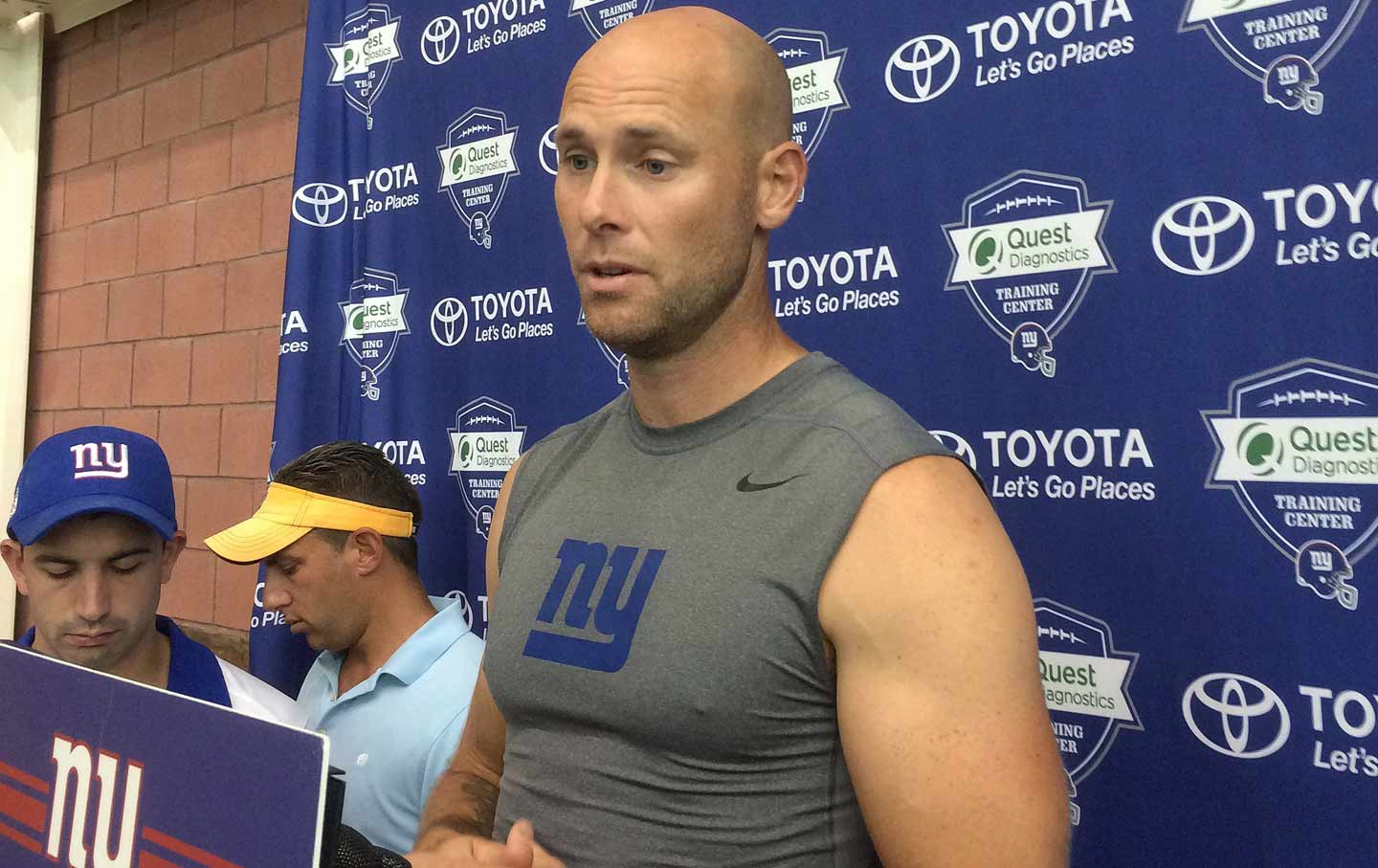 “He admitted to us he’d abused his wife in the past. What’s a little unclear is the extent of that.” So said New York Giants owner John Mara, on radio station 660 AM in New York City about his place kicker Josh Brown, after it was revealed that Brown had abused his ex-wife Molly repeatedly, more than 20 times, according her accounts to police and Brown’s own heretofore-concealed journal entries.

In a more just world, Mara would step down as president of the Giants and Commissioner Roger Goodell, who violated his own domestic-violence policy by suspending Josh Brown for just one game in August, would step down as commissioner. But this is the National Football League, and this is the real world. As King County, Washington, detective Robin Ostrum wrote in her follow-up report about the Brown case, “Molly was very upfront that in her experience, the NFL publicly says that they have a no tolerance policy on domestic violence, but the reality is that they do more crisis management and look to cover things up.”

This is not John Mara’s first rodeo. In 2014 he was appointed by Goodell, along with Pittsburgh Steelers President Art Rooney II, to help oversee the FBI “investigation” into the NFL’s handling of the infamous Ray Rice domestic-violence incident in 2014. They rubber-stamped the investigation that lightly chided, but effectively exonerated, their dear friend Roger’s handling of the case at a moment when the press and women’s organizations were calling for his job.

They were the perfect people for this task, as the dynastic Mara and Rooney names are peerless in the circles of NFL ownership. At the time Mara said, “Our goal here is to try to do whatever we can to eradicate domestic violence within our league and to take appropriate steps to punish those who are guilty of these violations. [NFL] commissioner [Roger Goodell] has made it a focus of his over the past few months, and it’s something that we’re all committed to doing.”

This patina of honor and respectability is why it largely escaped scrutiny this off-season when Mara, even with a one-game suspension looming for Brown’s domestic-violence arrest, offered him a two-year, $4 million deal and said, “I believe all the facts and circumstances, and we were comfortable with our decision to re-sign him.”

As terrible as this story is in isolation, it augurs a much greater crisis for Mara and Goodell about a league that has made a great deal of noise about a “zero-tolerance policy” in cases of violence against women, but in practice has done little. The league knew that there was a history of domestic violence in the Brown household. NFL security even had to be called at the Pro Bowl when Molly, who was staying in a separate room with their children, had to deal with a drunk Josh Brown trying to knock down her hotel door. That Brown only received a one-game suspension instead of the mandatory six-game suspension for domestic violence is curious. The idea that the league and the Giants, all of whom employ their own team of investigators stocked with former FBI and Secret Service agents, did not know about the extent of Brown’s abusive behavior is absurd. Now the fallout begins.

Inside the league, players are furious. One texted Bleacher Report’s Mike Freeman, “We must have the worst run league in sports. Who is our commissioner? Donald Trump?”

Baltimore Ravens wide receiver Steve Smith Sr., one of the most respected players in the league and someone whose mother is a domestic-violence survivor, tweeted, “You know what if your ex-wife was my daughter yo ASS would be on IR…. what a shame NFL acts like it cares.”

Annie Apple, who is the mother of Giants rookie cornerback Eli Apple and now writes a column for Sports Illustrated, wrote, “As a domestic-violence survivor, reading these Mara comments makes me sad, angry and completely baffled. He just doesn’t get it. This is sad…. And Molly Brown is somebody’s daughter, sister, mother; more importantly a human. It’s not about my son’s boss. It’s about Molly’s suffering.”

Many players are also texting reporters. I have heard from several NFL beat writers that Brown has gotten preferential treatment a black player would never receive.

Meanwhile, October is Breast Cancer Awareness Month, also known as the month that the NFL festoons its players in pink to show their commitment to the cause. It’s also traditionally when the NFL makes its very ham-handed attempt to expand their female market share because—one can only surmise—they think women really love the color pink. To have this story break out now only highlights the incredible chasm between Roger Goodell’s awkward yearning for more “pink dollars” and the reality of how the league handles its business behind closed doors.

It certainly appears that Goodell cut his friend John Mara a deal to circumvent the domestic-violence policy. This off-season, when Mara re-signed Brown, he said piously: “[Domestic Violence] is an issue that is very personal to a lot of us. I have four daughters and seven sisters, and I know I have to face each one of them. These are not easy decisions. It is very easy to say, ‘The guy has been accused, get rid of him, terminate him.’ But when you are sitting at the top of an organization and you are responsible for a lot of people, you better make more informed decisions than that.”

Now he is saying, “He admitted to us he’d abused his wife in the past. What’s a little unclear is the extent of that.”

As ESPN’s Jemele Hill tweeted acidly after those words went public, “Thank you John Mara for letting women know there is an acceptable amount of physical violence we can suffer before it’s taken seriously.”

This story isn’t going anywhere. It should end with not only Josh Brown out of a job but John Mara and Roger Goodell out of the league. But while Brown might be thrown overboard, the two men at the top will emerge unscathed, because that’s whom “the shield” is designed to protect.