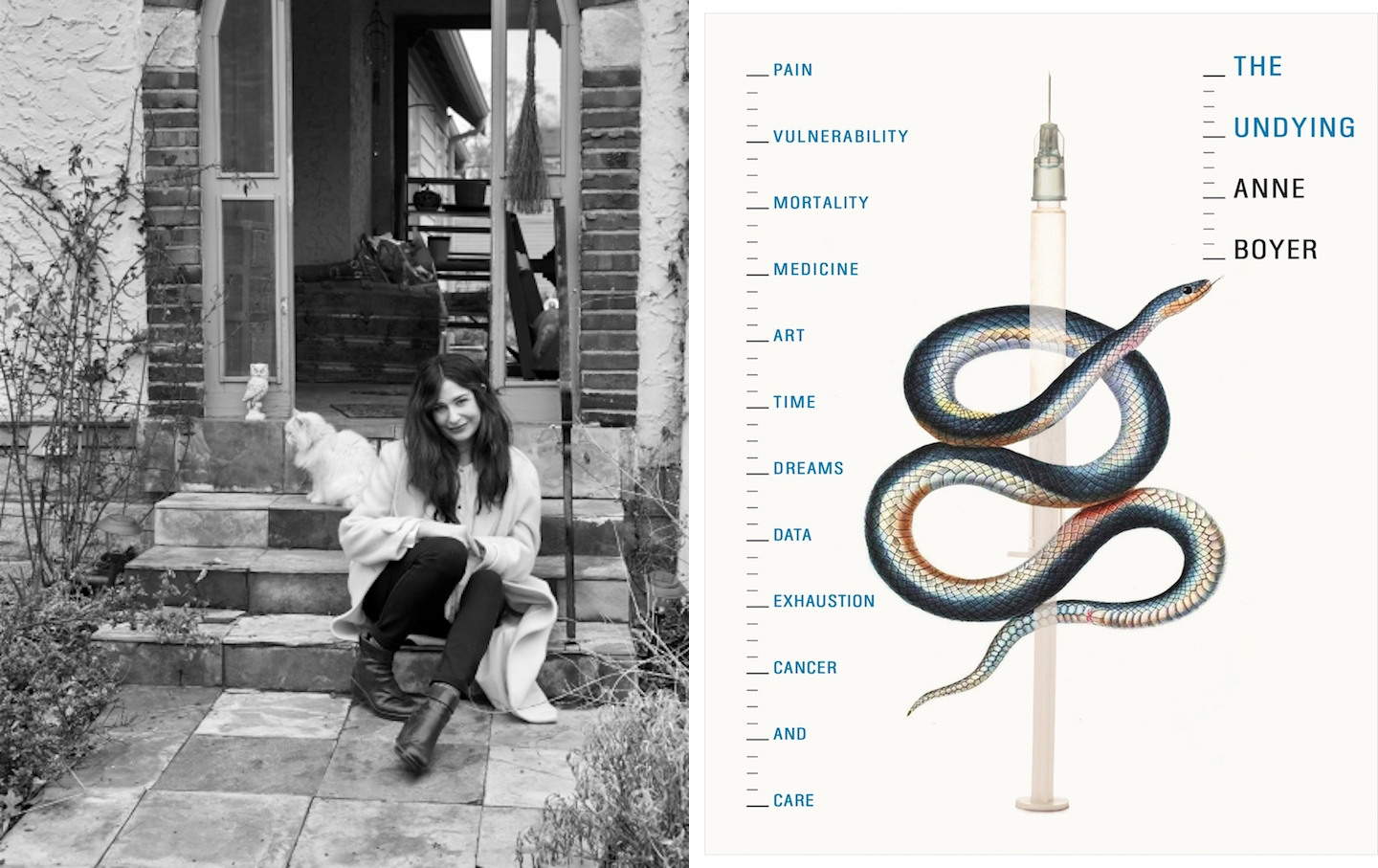 In 2014, Anne Boyer received a diagnosis of triple-negative breast cancer. The strain is known for its poor prognosis and lack of targeted treatment options, but genetic testing brought her some relief. The poet and essayist is a single mother; with results in hand, she says, she told her daughter she “doesn’t have to worry that she is predisposed or genetically cursed.” Her 14-year-old wasn’t exactly comforted. “‘You forget,’ she answered, ‘that I still have the curse of living in the world that made you sick.’” The Undying chronicles the world’s sickness alongside Boyer’s sickness in the world.

As she explores the ways cancer is narrativized, Boyer turns to Ellen Leopold, whose history of breast cancer details a 1990s-era, neoliberalism-inflected shift, wherein “the external world is taken as a given, a backdrop against which the personal drama is played out.” While many contemporary cancer memoirs stay within the confines of individual triumph or tragedy, Boyer insists on a collective and political reading of the disease, unpacking cancer’s “ideological regime” while experiencing it directly.

She’s a wry, brilliant guide, and familiar territory feels completely different in Boyer’s hand. In one scene, a surgeon won’t give her biopsy results if she goes to the appointment alone, so a friend takes a lunch break from her low-paying job to be there. Boyer uses the doctor visit as an opportunity to detail the United States’ guaranteed-leave policies, then offer brief and illuminating commentary on their impact. (“If you are loved outside the enclosure of family, the law doesn’t care how deeply…. if you need to be cared for by others, it must be in stolen slivers of time.”)

She weaves in and out of time, from ancient Rome to the Kansas City–area hospital halls presided over by her cherubic and clog-wearing oncologist. She’s not at a cancer pavilion; she’s sending a “communiqué from an exurban satellite clinic of a cancer pavilion named after a financier” where the cost of a single chemotherapy infusion is more than she has made in any year of her life. The Undying also has one of the longest subheads in recent memory—Pain, Vulnerability, Mortality, Medicine, Art, Time, Dreams, Data, Exhaustion, Cancer, and Care—but even that understates her exploration.

I spoke with Boyer by phone the day after she found a snakeskin near her house that looked as if it was cast off by the snake on her book’s cover. Our conversation has been edited for length and clarity.

Alex Ronan: The Undying feels radically different from other cancer memoirs. Why is that?

Anne Boyer: One of the things that happen when you get sick, especially if you particularly like to read, is that you get all these books in the mail. What I noticed was this incredible ideological onslaught treating everything as an individual experience as opposed to a collective, political one. All those struggles get put in these utterly rigid narrative containers in which we’re supposed to follow a sentimental heroine through the harrowing journey. It reproduces a sort of grim pleasure of watching women suffer. Cancer narratives are so, so burdened by this weight.

I think part of [the difference with The Undying] has to do with my being a Marxist feminist. That’s a political awakening from much earlier in my life. With economic troubles or troubles with sexual harassment or other kinds of gendered obstacles and violence, I decided that I could either see myself as loathsome and undeserving or I could expand beyond myself. I could not resolve to hate myself when I was young and these things were happening to me, so I began to reach out for a way to think about the world that didn’t require me to submit to the way that I was being treated inside of it.

AR: I wondered if part of the reason we don’t often see larger systems in other cancer memoirs is that people feel unqualified to write about them. I think of poets as figures whose position makes them qualified to write on everything and completely unqualified at the same time. How did your background in poetry come into play here?

AB: Everything I write, even when it’s not poetry, comes from the practice of being a poet. Poets are often wild autodidacts, and they’re also perpetual amateurs. The poet can study astrophysics, politics and never be a professional at anything, yet always have a claim to wonder about the entire world.

AR: You write about the positivity demanded of women enduring breast cancer, calling it “a test designed so everyone will fail,” after which “we all feel like failures, but each of us thinks we have failed alone.” Where do you think that forced and enforced positivity comes from?

AB: Some of it just has to do with the way that society has a million checks in place against women’s behaviors, most of them contradictory and impossible to fulfill. Cancer threatens femininity. It does so by rendering us physically different, taking away all those sorts of gendered aspects, like hair and breasts and reproductive functions, in a kind of physical degendering. So there’s an onslaught of social control to make our behavior somehow more feminine—that we’re supposed to be angelic beacons of positivity.

I would try to tell everyone around me that I’m not going to undergo an intentional program of self-delusion called positive thought. Death is just going to sit in the chair next to me, because if I die, then I’m prepared, and if I don’t, I’ve got a really great experience of learning about what it is to be human. I bought this little plastic skeleton that I named Death and kept with me as a reminder. After my last surgery, my friend—this poet, CAConrad—came to Kansas City. I think it was a full moon, and we were driving in their car to a garden, and they just start yelling, “Fuck death! Fuck death!” [Laughs.] In the garden we dropped Death, my plastic skeleton, into a pond. I suppose there’s a kind of positivity to some of the whimsy and some of the ways that I approached things, but it was more of an attempt to experience things fully. Death is now under a koi pond in Kansas City.

AR: I love that. Reading the news, it seems we’re always the verge of curing cancer, but the US death rate for cancer dropped only 5 percent from 1950 to 2005 when you adjust for age and size of the population. Do you think we require positive stories of cancer patients because we can’t handle the alarming realities of where we are in terms of treatment?

AB:: I think if the science got better, the onslaught of control over the attitudes and behaviors of patients would go away. I mean, oncologists, oncology researchers, and everyone else who works with cancer, they are incredibly frustrated by the crude tools that they have to treat it.

I didn’t know anything about having breast cancer [before being diagnosed]. I hadn’t really been around it. I thought you had this little interruption and you went on. I had no idea that women in their 30s and 40s were dying and that they were dying in the same way they would’ve died hundreds of years ago.

AR: In The Undying, you write, “Only one class of people who have had breast cancer are regularly admitted to the pinkwashed landscape of awareness: those who have survived it. To those victors go the narrative spoils.” How did you think about writing as someone who has survived?

AB: I’m deeply ambivalent toward the word “survival” and the term “survivor.” I don’t know what else to use, but I also know that I cringe at it, because I don’t want to suggest in any way that those who die died because they were weak or died because they’d done something wrong. [The survivor framing] turns the entire world into some sort of sports game in which there are winners and losers. I hate sports. I hope we can develop a new language for it, one that would give adequate form to the complexity of our experience.

AR: What surprised you most about cancer treatment?

AB: The most surprising part was that I had to sign all sorts of release forms for the damage that the chemotherapy would do to me and none of them were for the brain damage. I learned about the brain damage casually. There is no widely available rehabilitation for this persistent, disabling, and now it looks like lifelong condition of chemotherapy-induced cognitive disability. On the other hand, there’s a federal law so that everyone with health insurance who gets breast cancer can get a free breast reconstruction.

You would think that there would be a social value to making sure that this huge part of the population—people who have undergone chemotherapy—would be able to think clearly and work and to engage in life in a productive way. How little concern was given to the minds of cancer patients and especially women was just shocking to me. I expect bad things of the world, and I’m not shocked too often, but I was shocked by that.

AR: This book felt like such a triumph of the mind. What has it been like to write while dealing with these cognitive impairments?

AB: One thing that I learned writing it is that even if you’re really exhausted or really tired, you only have to write a sentence at a time or a word at a time. There’s a way, even when you feel like you’re in the most impenetrable fog, to say the things that you need to say. I miss my pre-cancer mind and the way that I was so quick and just so prolific and things came to me so easily. I don’t have it anymore. Having been slowed down and having learned how to write through the fog—perhaps something about what I’m doing became deeper, too. Sometimes I’m out of commission with disability still. But having learned to take records in the fog and through the fog all came to me from that. Now I sound relentlessly positive. [Laughs.] But it’s true.