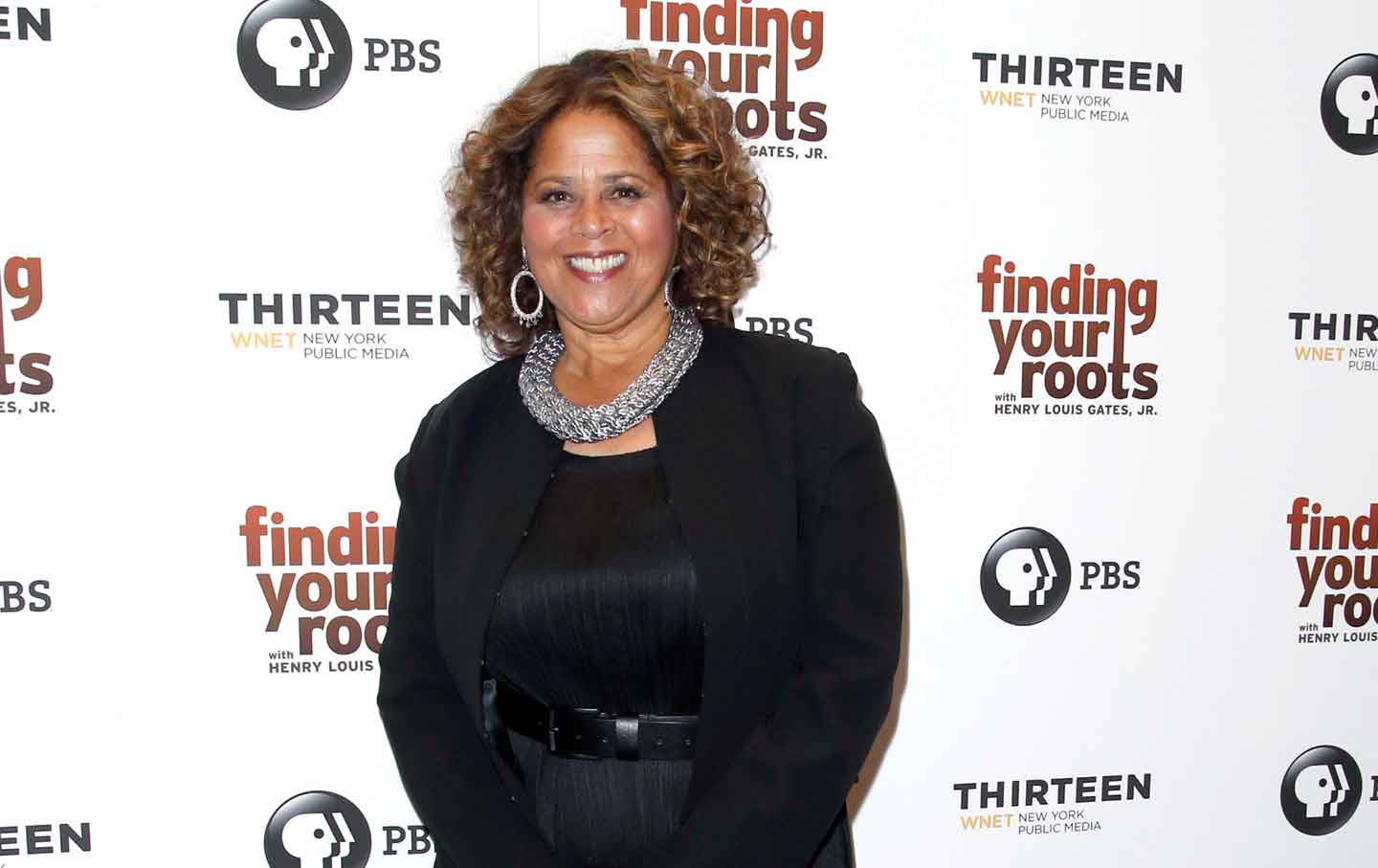 The actor and playwright Anna Deavere Smith is best known for playing Gloria Akalitis on Nurse Jackie on Showtime.  But she is also the recipient of a MacArthur “Genius” Fellowship and a Pulitzer Prize nomination, and President Obama awarded her the National Humanities Medal.  This interview has been edited and condensed.

Jon Wiener:  You’ve been working recently in Baltimore, where Freddie Gray, a 25-year-old black man, was killed by the police last April—on what they call a “rough ride” in the back of a police van, which broke his neck. Six police officers have been charged in his death, the jury in the first trial couldn’t reach a verdict, and the rest of the trials will begin soon. You grew up in Baltimore—what was Baltimore like for black people in those days—compared to today?

Anna Deavere Smith: We had de facto segregation. Blacks lived with blacks, gentiles with gentiles, Jews with Jews. Baltimore now looks to me like a disaster area. So many places that I knew from my youth—I left when I was 16—are just broken-down, boarded-up buildings, and there’s nowhere near the opportunity that the Negro community had in my time. Part of it is that industry left, part of it is crack cocaine came in. A pretty solid black working class and a black middle class disintegrated in Baltimore.

Your mother was a teacher, and so were your aunts and all of their friends. You have been working on something you call the Pipeline Project—it’s about teachers and the school-to-prison pipeline.

The Pipeline Project is about how poverty manifests in black, brown, and Native American communities in such a way that the likelihood is high that a kid will end up in the juvenile justice system and then in prison. The Justice Department has statistics that prove that poor children of color are more likely to be suspended or expelled from school, and for things that sometimes aren’t very clear—like “willful defiance,” which can mean looking at the teacher the wrong way. But I feel it’s a little bit dangerous to blame schools and teachers for something that is rooted in poverty and the way people live without opportunity.

Listen to Anna Deavere Smith, beginning at 28 minutes in to this week’s podcast.

Your most important work has been your one-person performances onstage, where you take a social and political issue, interview more than 100 people with different perspectives, and then portray about two dozen of those characters yourself, re-creating their speech and gestures—it’s amazing. Recently you performed in Baltimore, in a piece about Baltimore.

I ended up doing my Pipeline Project research in Baltimore by a series of unexpected events. I arrived in Baltimore to do research only after the riot, or the events, or whatever you want to call it. I went back in December to perform—now the trials [of the police officers charged with murdering Freddy Gray] are just about to be starting. It’s exciting to be performing in a city where the issues are very much alive.

One of the characters you play onstage in your “Baltimore Chapter” is India Sledge—who is she and how did you find her?

I met India in a sort of GED program finishing her high-school education. She had left school because she was pregnant. She’s still a teenager. We were very charmed by her. And she gives a very good sociological evaluation of the environment she lives in:

“It’s exciting to be performing in a city where the issues are very much alive.”

You talked to a really interesting guy named Michael Tubbs in Stockton, California. Who is Michael Tubbs—and how did you find him?

Michael Tubbs is a star. He is well known in California, the youngest councilman that Stockton has ever had, and right now he’s running for mayor. An extraordinary young man. He graduated from Stanford and started campaigning when he was still in school. What interested me about Michael was, here’s a bankrupt city, a homicide-ridden city, and young people like Michael who have great educations are coming back home to try to make a difference. I found him to be pretty irresistible.

[Anna as Michael Tubbs, talking about reading aloud in a classroom:] I was reading about Dr. Martin Luther King Jr. And I got to the point where he was assassinated, I try to go through the page really quickly, ’cause I really didn’t want 6-year-olds to think about that. So one little boy raises his hand. ‘Mr. Tubbs! My uncle got shot!’ Then another boy says, ‘Mr. Tubbs! My cousin got shot!’ Before I could turn the page, every student in the classroom knew somebody who’d been shot or met a violent death. . . . What life is this when you can’t see past 18, you won’t be alive at 25? It’s just so heartbreaking. Prison, or death. There’s really no other opportunity for boys, young men of color in Stockton. Prison, or death.

One of the people you portray in the Pipeline Project is a young teacher from Philadelphia, named Stephanie Williams.

Stephanie I met by accident when I was going into a school in North Philadelphia. I didn’t expect anybody to recognize me there, but she stopped and pointed at me—usually that’s because somebody’s seen me on Nurse Jackie. But actually she knew one of my early plays. She’s an elementary school teacher, working with kids who have emotional problems. You get a sense here of what teachers go through. My idea would be to make schools habitable for everybody—not just the kids, but also the teachers and the counselors and the janitors. Stephanie Williams is doing everything she can to do her best as a young woman who graduated from Mount Holyoke. She’s dedicated. And it’s hard.

[Anna as Stephanie Williams:] I felt like I had a whole bunch of hungry, starving people, and I had nothing in my hands to give them, even though I tried to give them so much. It was hard to be that strong day in and day out. It was like running a jail without a gun. That’s what it was like. It was like being in jail without a gun.  No gun, no handcuffs, no billy clubs, I can’t throw you in the closet, I gotta keep you in order—just by being me.

I read that you are experimenting with new forms for your stage performance to engage the audience directly and inspire them to action.  What did you do in Baltimore, and how do you think it worked?

My idea is to stop the show in the middle, and what is normally called the second act, give that over to the audience. We take an audience of approximately 500 people, divide them up into groups of 20, and send them to other parts of the theater—backstage, onstage, in rehearsal rooms and dressing rooms. In Baltimore one group met in the paint shop, another group met in a stairway. And then we get them talking about what they can do after they’ve seen the first act, and asking people to make commitments. Because in my mind the audience has folks who can do much more than me. We can entertain, we can move an audience, we can get you to laugh and cry, but my work is just a call for action. There are people in the audience who know a lot more about incarceration than I do, a lot more about education, younger people who are in school or recently out of school. And there’s probably somebody in the audience who can write a bigger check than everybody else put together. I did it also this past summer in the Berkeley Repertory Theater. Let’s take this group of strangers sitting in the dark and try to do what we can to bring them together as a group of active citizens.

LISTEN to Anna Deavere Smith on the Nation podcast.