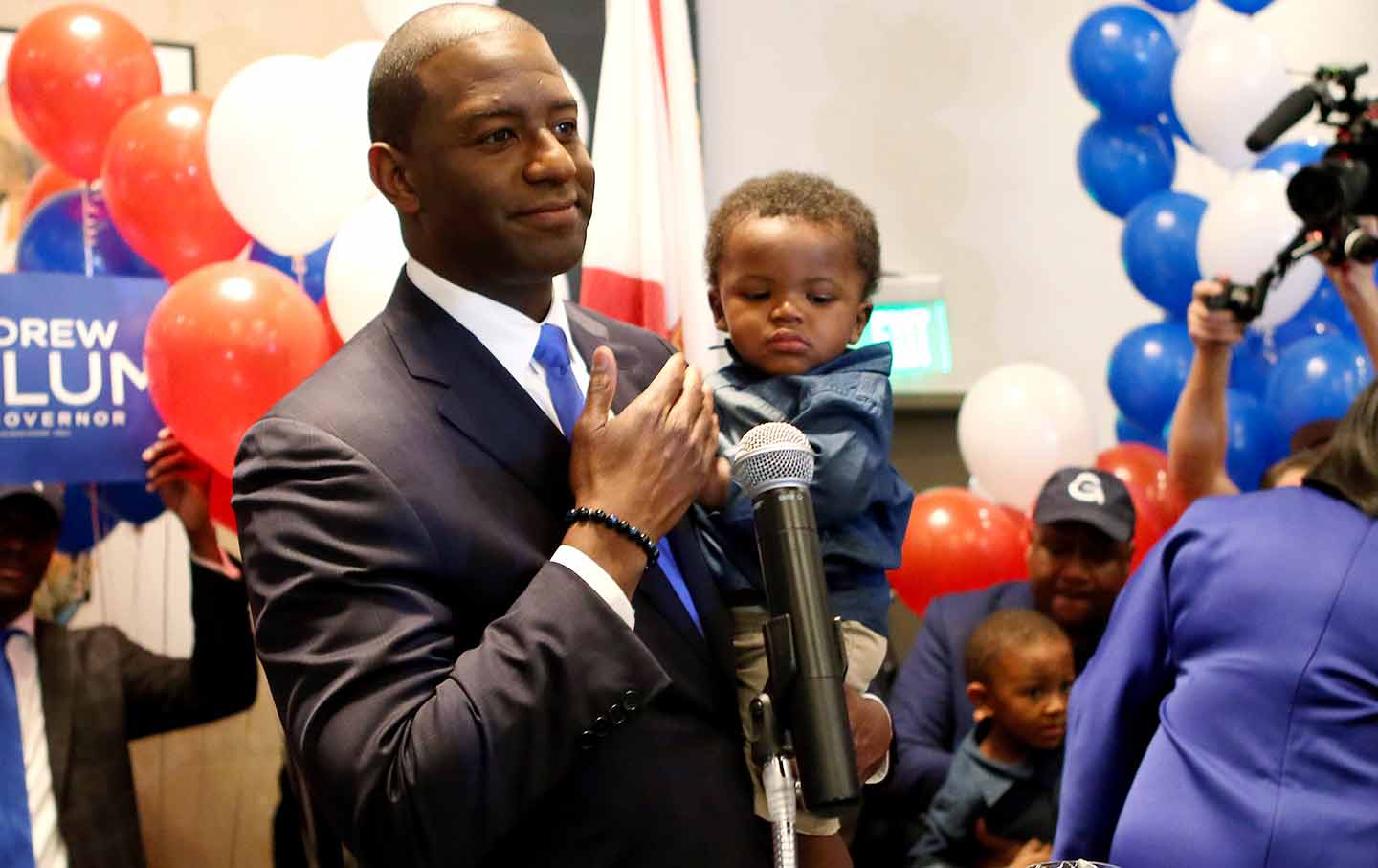 Andrew Gillum holds his son after winning the Democrat primary for governor on Tuesday in Tallahassee. (AP Photo / Steve Cannon)

There they go again.

Just three weeks ago, the mainstream political media reported that the broad Democratic left was divided, and that the so-called “establishment” wing had defeated the forces of Senator Bernie Sanders. The evidence? Mainly that in Michigan, Gretchen Whitmer beat Sanders-endorsed Abdul El-Sayed in the gubernatorial primary, while in Kansas, Sharice Davids topped another Our Revolution favorite, Brett Welder, for a congressional nomination. I argued at the time that progressives, defined broadly, had in fact won the night: It’s ridiculous to define women like Whitmer, who supports a $15 minimum wage, gun-safety legislation, and Planned Parenthood funding, or Native American lesbian Obama administration veteran Davids, as merely “establishment.”

This time, the script is flipped, but the divisive storyline is the same.

Now the Sanders forces supposedly have the establishment on the run, with the surprise victory of Tallahassee Mayor Andrew Gillum in a crowded Democratic primary race. But again, that’s the wrong takeaway from an exciting primary. Gillum was an early Hillary Clinton surrogate and convention delegate whose victory is first and foremost due to the hard work of African-American Democrats, the backbone of the party. The “Gillum beats the establishment” storylines are creating a false narrative, maybe even intentionally so.

As is often the case, Politico demonstrates the problem. Three weeks ago it told us “Bernie and his army are losing 2018.” This morning we learned “Sanders-backed Gillum notched Florida stunner.” Both stories were misleading.

Black Democrats bet on Gillum early, when most observers didn’t think he had a chance. BlackPAC and Color of Change went all-in last spring; the Sanders endorsement came in August. It was particularly meaningful since Gillum had been a prominent Clinton surrogate. As he did with Stacey Abrams, a black Clinton supporter who won the gubernatorial primary in Georgia, Sanders showed an ability to move beyond the fissures of 2016 that others in the party, on both sides, appear to lack—and that the media will forever use to write their favorite (and laziest) storyline, “Dems in disarray.”

Gillum also got help from outside groups like Tom Steyer’s Next Generation America, focused on the youth vote, and Moms Demand Action, the gun-safety group, both of which backed Clinton. He also won the backing of Democracy for America and the Working Families Party, which backed Sanders. It’s true that Emily’s List endorsed Gwen Graham (as it had Whitmer in the Michigan primary), but given its commitment to electing female Democrats, that wasn’t surprising. Indivisible chapters and other post-Trump progressive groups worked hard for Gillum, too.

Clearly, a cross-party spectrum of Resistance groups backed Gillum, but the media wants to give all credit to Sanders. Somehow, they are managing to frame his win as divisive, when in fact it holds the promise of ending the unnecessary schism between “identity politics” and “economic progressivism.” Gillum, by the way, didn’t have to be “pushed left” by the Sanders forces. Like a lot of folks who supported Clinton (myself included), he was already there.

When reporters are not hyping the “Sanders wins!” line, they are busy worrying that a black candidate simply can’t win Florida. Graham was widely judged more electable, though given that Clinton lost Florida to Trump, I found it hard to be reassured that a Democratic woman with establishment ties (her father is former senator Bob Graham) was a shoo-in. As Greg Sargent notes, yes Gillum supports Medicare for All, a $15-per-hour minimum wage, abolishing ICE (at least as it’s currently constituted), and raising corporate taxes to fund teachers’ salaries. But on Morning Joe, he resisted the Sanders-clone framing and “didn’t back off his economic progressivism in the slightest, but he presented it as pragmatic and solutions-oriented,” Sargent observed.

I think the biggest winner in Florida Tuesday night was incumbent Democratic Senator Bill Nelson, who is facing a tough challenge from plutocratic Governor Rick Scott. The pair is close to even, and Nelson is running a cautious, uninspiring campaign. Gillum will mobilize the black vote, energizing a progressive multiracial coalition that might sleep on Nelson. Ron DeSantis is a clownish Trump wannabe who blew a racist foghorn, not a dog whistle, in his first Wednesday television interview, calling Gillum “articulate” (boilerplate for “surprise, an educated black man!”) and warning Florida not to “monkey this up.”

Trump backed him by blaming Gillum for “crime” (an ancient dog whistle) and attacking him as a “failed socialist” on Wednesday.

Not only did Congressman Ron DeSantis easily win the Republican Primary, but his opponent in November is his biggest dream….a failed Socialist Mayor named Andrew Gillum who has allowed crime & many other problems to flourish in his city. This is not what Florida wants or needs!
—Donald J. Trump (@realDonaldTrump) August 29, 2018

Make no mistake, these top two Florida races were officially nationalized Tuesday night. Yes, I know that means more GOP money and more GOP racism. But it also means all kinds of progressive, multiracial, broad-coalition activism behind Gillum, which will also help Nelson. I hope it also means we will see more attention to registering and mobilizing Puerto Ricans who fled Hurricane Maria. Yesterday we learned the storm killed 2,975 people in the territory, almost exactly as many as died on 9/11. Puerto Rico’s Florida refugees are eligible to vote, and they should make Trump-clone DeSantis and Rick Scott pay for Trump’s cruel and racist neglect. Andrew Gillum’s Democratic Party is one that is wise and energetic enough to mobilize new or discouraged voters in every corner of the state. It’s a victory for all of us. Florida emerges as a state to watch closely this November—and in 2020.