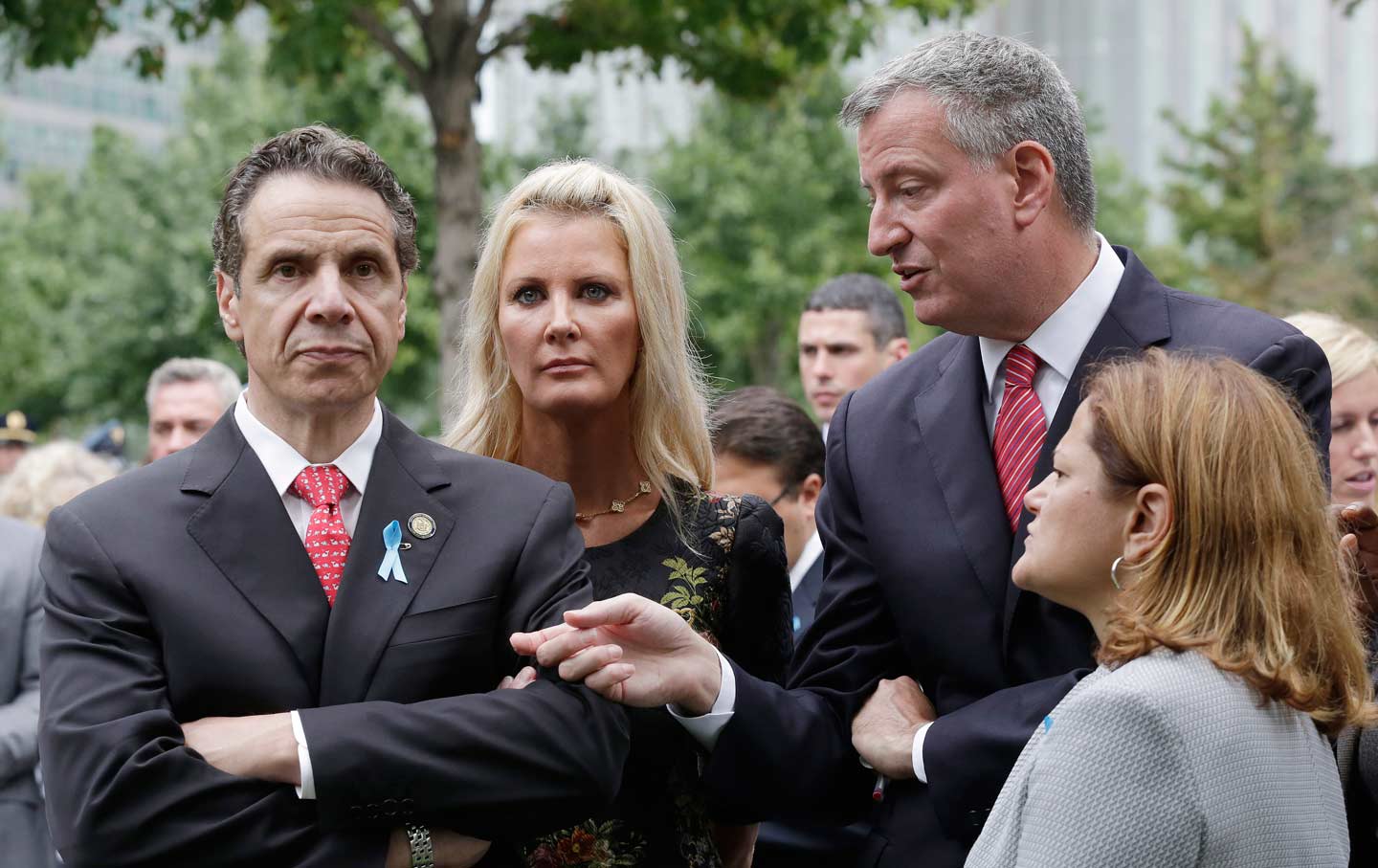 Governor Andrew Cuomo and Mayor Bill de Blasio are locked in a pissing match, disguised as a policy debate, over who is man enough to run New York City.

The governor’s constant critique of the mayor’s management is really a coded challenge to his masculinity.

Take, for example, a recent response from the governor’s spokesperson to the mayor’s ongoing complaint that the state is depriving the city of critical resources: “Everyone is tired of hearing about what the mayor ‘feels’—he should just try to do his job. Actions—not words and feelings—are what matters.”

Classically, this is how men have excluded or diminished women in the workplace, creating a false dichotomy between emotions and competence. Having feelings is the opposite of action and makes you bad at your job. If the mayor were a woman, the same rhetoric would be obviously sexist, but used against a man it’s a more subtly gendered attack for being like a woman. When the mayor forcefully advocates for more resources, and denounces the governor for withholding them, the governor wants us to believe that the mayor is being hysterical.

In contrast, the governor positions himself as a paternalistic savior to those in need of his protection.

At an announcement about the MTA’s efforts to combat the Zika virus, Cuomo reiterated the point by taking an oblique shot at de Blasio: “If any mayor is not doing his job…or is playing politics…I’m not going to allow people to suffer and pay the price.” It’s unclear how de Blasio has failed here. The Department of Health has been aggressive about public outreach, and as of June all diagnosed cases had been successfully treated. Plus, the MTA is a public authority controlled by the state, so it’s not even in the mayor’s power to set policy. Regardless, there’s the governor asserting his status as man of the state, taking action against a manageable problem as if it were a crisis.

This bad behavior goes beyond bullying to reveal a toxic masculinity.

“If the definition of masculinity is to never show your feelings, never back down, always be strong, be tough, never cry, than toxic masculinity is an over-conformity to dehumanizing ideas of masculinity,” explains sociologist Michael Kimmel, founder of SUNY’s Center for the Study of Men and Masculinities. “Any solution to proving your masculinity taken too far becomes toxic.”

Particularly for women and children, who often serve as props in Cuomo’s performance.

There’s a homeless crisis? Blast off a letter to the City highlighting an erroneous rape report and threaten to take charge. An increase of reported incidents of sexual harassment in the subway? Send in the cops. Lax emergency procedures at daycare centers? Accuse the mayor of child endangerment.

Even a press conference can be a proving ground for the governor’s penis. Earlier this summer the Queens-born Cuomo was in the Bronx to unveil a youth-jobs program. Referring to his undergraduate years at Fordham University, the governor reminisced, “Sports, we had a little Queens/Bronx competition, basketball, baseball who had the better teams. There was a feeling back at the time that some of the young ladies in the Bronx preferred dating Queens boys. I know that created a little tension.”

There’s nothing wrong with borough rivalry, but refracted through a display of sexual dominance, it speaks to an ingrained sexism where manhood is a competitive sport and women are the prize. Men are the governor’s direct audience for that kind of comment, leaving women out in the cold.

Yet the mayor doesn’t perform on Cuomo’s playing field. Instead, he routinely describes his wife, Chirlane McCray, a previously lesbian-identified black woman, as an equal partner and, like Jimmy Carter and Bill Clinton before him, suffers ridicule for appearing weak. Memorably, the New York Post emasculated him in a cartoon featuring the couple in bed, with de Blasio in a bra, heels, and stockings.

Meanwhile, in his State of the State address the governor announces an initiative to protect “our women” from breast cancer, using the language of patriarchal control, and no one bats an eyelash.

While much has been written about the negative effects of Cuomo’s posturing on policy, the implications for how we understand leadership and gender are equally concerning.

As Kimmel sees it, “The problem is not so much the toxic masculinity per se. It’s when it’s in the public sphere. It’s held up not as a negative example but people look at it and it becomes a role model. He’s doing it and he’s successful.”

In other words: definitional.

The parallel to Trump and his throngs of macho, white, male supporters is almost too obvious.

Earlier this year, while campaigning for a $15 minimum wage in an RV, the governor repeatedly mocked the bus for being pink and blue. “It is different. It is a little loud for my style,” he joked. At stops across the state he seemed to distance himself from it by retelling a story about a similar pink bus he mistakenly had painted for his father’s campaign. Pink is a put-down for a man because it’s code for feminine, ergo feminizing the mayor is a way to insult him.

Except when it’s time to condescend to women. Then the governor is happy to drive around in a pink-accented bus for his man-made Women’s Equality Party, fill auditoriums with pink balloons, and send Pepto-Bismol–colored flyers about equal pay to female voters. The governor established the “party” in 2014, but instead of succeeding in electing more women to office, it served only to bolster his own reelection. It continues to be controlled by the governor, whose office returns press calls made to a nominal executive director. Former state senator Cecelia Tkaczyk even sued (unsuccessfully) for control of the party on the grounds that a party for women shouldn’t be controlled by a man.

Notably, there wasn’t a pink banner in sight when the mayor signed legislation to make free tampons and pads available in public high schools and middle schools.

It should tell us a lot about the limits of the governor’s thinking and where our society still is, that this persistent, low-grade sexism goes mostly unremarked upon.

Ironically, it took a real, live woman to rattle the macho man. In a now infamous viral video, Zephyr Teachout, the governor’s 2014 opponent, tried to approach him at a parade. Unable to face her, the governor turned away, crying out desperately for de Blasio: “Where is the mayor when you need him? We need the mayor!” The 6’5″ de Blasio literally came to his rescue by making his body into a human barrier.

The governor hasn’t been that happy to see him since.