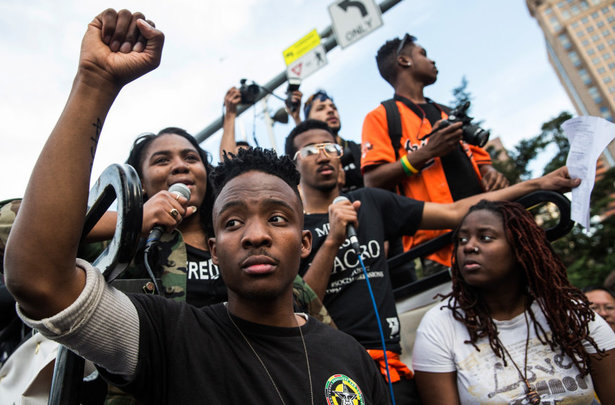 This post is part of The Nation’s biweekly student movement dispatch. As part of the StudentNation blog, each dispatch hosts first-person updates on youth organizing. For recent dispatches, check out April 10 and April 24. Contact studentmovement@thenation.com with tips. Edited by James Cersonsky (@cersonsky).

On Monday, April 20, all charges were dismissed in the case of Chicago police officer Dante Servin, who shot and killed 22 year-old black woman Rekia Boyd in 2012. In solidarity with Boyd’s family, a rally outside the Chicago courthouse followed the verdict and, on April 22, Black Lives Matter hosted another rally in New York City’s Union Square. From Chicago to New York, Boyd’s name has been lifted up at larger Baltimore solidarity actions, with activists nationally calling for greater recognition of black women and girls victimized by police violence and often left out of narratives that center black men. Black Youth Project 100 has launched a petition calling for Servin to be fired and, in collaboration with Ferguson Action and Black Lives Matter, is calling for a National Day of Action to End State Violence Against Black Women and Girls on May 21.

This spring, students at Brighton Park Elementary School in Chicago joined peers from across the country in organizing a mass refusal of the PARCC standardized test. We selected one student in each class as a leader, who made sure everyone knew their rights and passed out an opt-out form to anyone who wanted one. Before the PARCC, we assembled within our school to turn in all the forms. While the school initially dismissed our efforts, we ultimately got the administration to show us respect—“This was very well organized!” When it came time to take the test, 97 percent of eighth graders and 86 percent of seventh graders opted out, leading to normal classes the following week instead of a second week of testing. While there are many reasons to refuse the test, we, a largely Latina/o school, reject it as racist; it’s given only in English and doesn’t respect our multilingualism. And while the media acts like only whites are opting out, we are showing otherwise.

Students Against the Prison-Industrial Complex at Brown University is organizing to combat Brown’s perpetuation of the prison industrial complex. This spring, we led a successful campaign to assign Michelle Alexander’s The New Jim Crow as the summer reading for incoming first year students. From April 20 to 24, we organized a week of engagement addressing mass incarceration, prison abolition and community activism as part of the Prison Divestment National Week of Engagement—which hosted events from community forums in California to a sit-in in New York. Moving forward, we will continue working to get our university to divest from prisons and “ban the box” on student and staff applications to Brown, while supporting the work of Providence community activists.

4. At Marquette, Students of Color Sit Down to Demand Racial Justice

On April 27, the Ad Hoc Coalition of and for Students of Color at Marquette University assembled to address campus policies on discrimination, police brutality and divestment from companies which commit human rights violations—and pressure the university to “do better” for students of color. Alongside local groups including the Coalition For Justice, four students were arrested after joining arms and sitting down in the middle of a busy campus intersection, shutting down traffic for nearly an hour. The coalition will continue to organize until its demands are taken seriously by the administration.

5. At Colby, a Groundswell Takes Over the “Hill”

On April 12, 2010, two students of color were aggressively detained by Colby College Security in the Pugh Center for multicultural affairs. This April, as part of a yearly reminder, Students Organized for Black and Hispanic Unity organized a week of demonstrations highlighting issues of racial injustice underlying the incident. On “Disruption Tuesday,” April 14, we chanted around campus protesting violence against people of color in the United States and around the world—sparking a range of hateful, threatening and racist comments on the Yik Yak app. The next day, which other groups planned as “Well Dressed Wednesday,” we decided to protest respectability politics, which will not save us from bullets or discrimination, as part of a die-in. In response, the school organized a teach-in and dine-in with faculty and students, bringing out 500 people—an uncomfortable experience for some, but a necessary step in creating a supportive community for all students and acknowledging racism on campus.

6. At UPenn, the Africa Center Meets the Global “Compact”

On April 15, the University of Pennsylvania’s School of Arts & Sciences announced that it would eliminate the Africa Center and move its programs to the Center for Africana Studies and the Penn Language Center, effective July 1. In response to this last-minute and unexpected decision, Students for the Preservation of the Africa Center has raised the issue across campus, with protests during Penn’s College Palooza for prospective pre-freshmen, multiple talks with administrators and an ongoing petition. We see a contradiction: the university is working to consolidate the only two areas of study dealing with Africa while simultaneously avowing to increase Penn’s global engagement with Africa. From meetings with SAS deans, we’ve witnessed little attempt to ensure that Africa and its 1.1 billion inhabitants have an independent place of study at the university.

—Students for the Preservation of the Africa Center

On April 24, more than 130,000 activists took to the streets of Los Angeles to demand justice for the Armenian genocide, the second-largest demonstration in the city’s history. The Armenian Youth Federation, a global grassroots social justice organization, stated in its speech to the crowd, “You do not define our history; nor will you define what our justice is,” in reference to President Obama’s continued denial of the Armenian Genocide on behalf of NATO-ally Turkey. A new wave of activism is escalating demands for Armenian Genocide justice, from recognition to reparations, marked by an AYF-led call for divestment of $70 million from the University of California funds in Turkish government bonds—unanimously endorsed and adopted by UCLA and UC Berkeley undergraduate student governments—along with a newly filed lawsuit in Turkey’s highest court by the Armenian Church.

8. No Time for American Sniper

On April 7, Middle Eastern and North African and Muslim students and allies at the University of Michigan wrote a letter to the Center for Campus Involvement asking it not to screen American Sniper, a war propaganda film that whitewashes the racism of former US soldier Chris Kyle and dehumanizes Iraqis, Arabs and Muslims, at UMix Late Night. UMix Late Night is meant to be “a series of fun, late-night activities and events for University of Michigan students… catering to the interests of a diverse student population”; this film incites racism and Islamophobia against communities on campus. In response, CCI postponed the screening, indicating that it would screen it in an appropriate setting of reflection and dialogue. After receiving backlash, including a counter-petition and viral tweet by football coach Jim Harbaugh, the university reversed its decision and reinstated the screening, further marginalizing and demonizing Arab, Muslim and other marginalized voices on campus—and prompting an ongoing, collective response.

Editor’s note: On April 28, students from the University of Maryland–Eastern Shore blockaded Route 13 in the aftermath of Freddie Gray’s murder. (Video: NEWS 24/24)