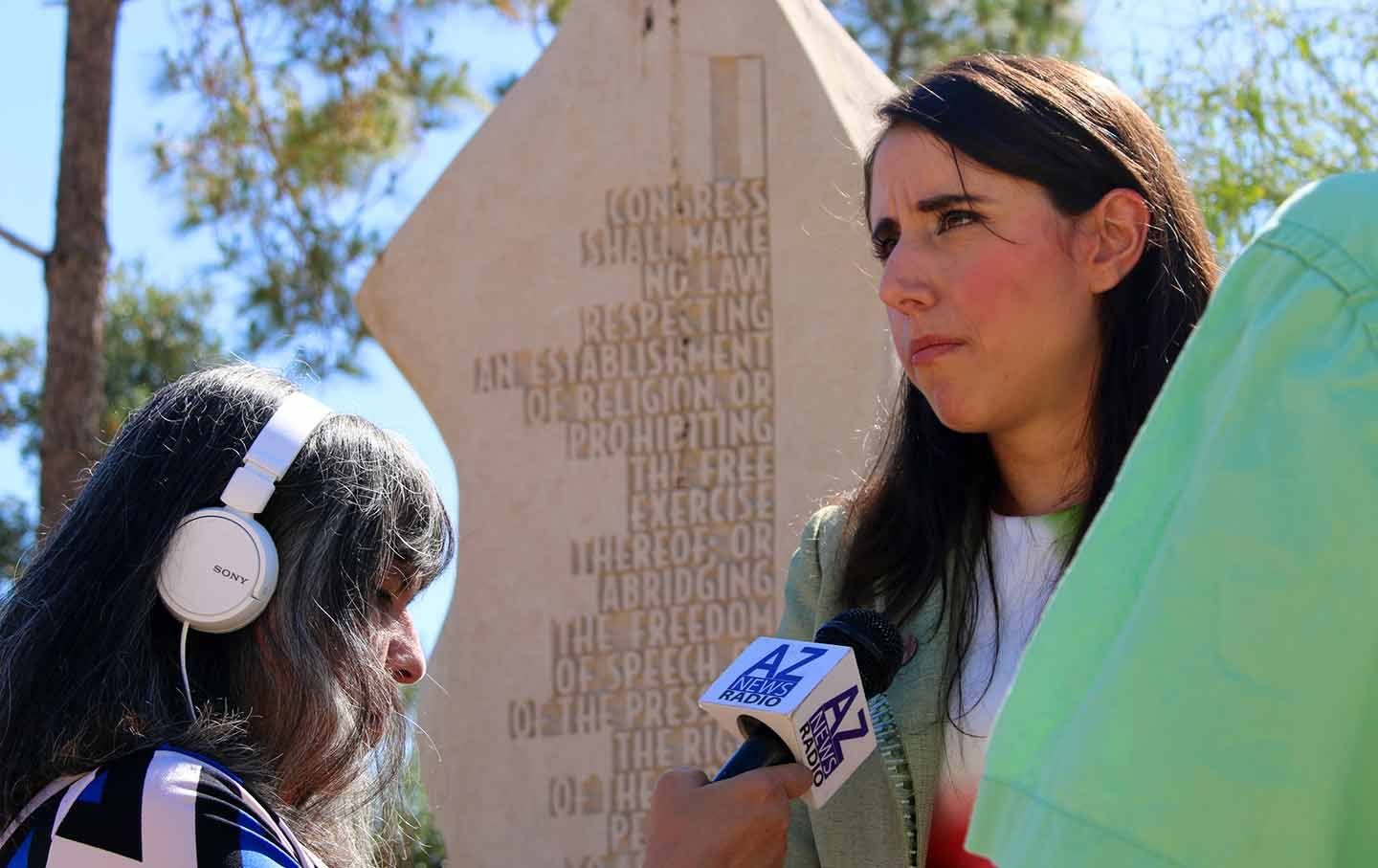 Arizona legislators sign up to deliver an invocation at the opening of the daily floor session of the state House. But when newly elected state representative Athena Salman’s time came to inspire the chamber, all hell broke loose.

The Tempe Democrat stepped up on April 18 to offer a exceptionally thoughtful statement that reflected on high ideals, shared values and the pursuit of a more perfect union:

Take a moment to look around you at the people gathered here today. We come from a variety of backgrounds and interests, but the passion that ignites us; the fire that burns within us; is similar. We all seek to form “a more perfect union,” creating change from an abiding passion to improve the lives of the humans of this city. There is wonder in that. More importantly, though, there is unity.

In a nation often eager to be polarized in its views, allow us in this moment to recognize what we have in common: A deep-seated need to help create a more just and positive world. As we speak today, remember that commonality. Remember the humanity that resides within each and every person here, and each and every person in the city, and in all people in the nation and world as a whole. In the words of former President of Illinois Wesleyan University Minor Meyers, Jr., “Go forth and do well, but even more, go forth and do good.”

Wise and compelling words? Without a doubt. Healing and reconciling? Absolutely. Respectful of differences yet hopeful for cooperation even in these divided days? Certainly. In other words, Representative Salman, who represents a diverse district with many religious and secular traditions, delivered an admirable and appropriate address.

Or so it would have seemed.

The new legislator’s invocation drew an immediate rebuke from Republicans in the chamber, who objected that she had not chosen to “invoke a higher power.” A Republican legislator demanded that he be allowed to present a substitute prayer and went on to offer a Christian pronouncement. House Majority Leader John Allen, a Republican from Scottsdale, embraced the objections, declaring that: “I know it’s difficult to understand, but a prayer should be to a higher power.” Allen and others criticized Salman for violating the rules for the chamber by offering a humanist invocation.

“Opening prayers in the House should represent Arizonans of every faith’s perspective.”—State Rep. Athena Salman

A lot of Arizonans think so. “By requiring these ‘prayers’ to recognize a ‘higher power,’ the House rules silence secular lawmakers and prejudicially deny them a platform to speak that is available to their religious colleagues,” explained Arizona Secular Coalition board chair Zenaido Quintana. Dozens of Arizonans joined Salman for an interfaith “Standing for Our First Freedom” event on the steps of the Arizona state Capitol Thursday. They read aloud from Salman’s humanist invocation and declared their solidarity with the legislator and with the Bill of Rights.

Surrounded by humanists, Christians, Muslims, and other advocates for religious pluralism and respect for secularism, Salman reminded the group that: “The Arizona House of Representatives is the people’s house. Opening prayers in the House should represent Arizonans of every faith’s perspective. This includes the hundreds of thousands of Arizonans who, like myself, do not believe in a supernatural god, but do believe in the power of humanity to do good in the world.”

Salman told the Phoenix New Times that she plans to formally object on constitutional grounds to the chamber’s prayer rules. And Maggie Garrett, the legislative director for Americans United for Separation of Church and State weighed in with an enlightened explanation of the issues that the Arizona cases raises for legislative chambers not just in that state but nationally.

“Religious freedom is a cherished American ideal. It guarantees that everyone’s tradition, whether Christian, Jewish, Native American, Muslim, Sikh, Hindu, or humanist, must be treated equally. And yet, the Arizona House spurned this principle,” Garrett observed. “An invocation’s purpose is to solemnize the legislature’s work and set the tone for cooperative public service among the legislators. All Arizona representatives should be treated equally and have the opportunity to provide their chosen prayer before their House colleagues. Nontheists, like Salman, want to be treated the same as everyone else. Excluding them is religious discrimination, plain and simple.”

Indeed, noted Garrett, “the actions on the House floor didn’t just send a message to Salman that her beliefs regarding religion are unwelcome in the Arizona House of Representatives. These actions sent the message to the many Arizonans who are atheists, humanists, agnostics, or belong to minority faiths that they are outsiders, not welcomed by the very people elected to represent them. The House invocations, which supporters promise are a moment of unity, inevitably serve to divide legislators and constituents [along] religious lines.”