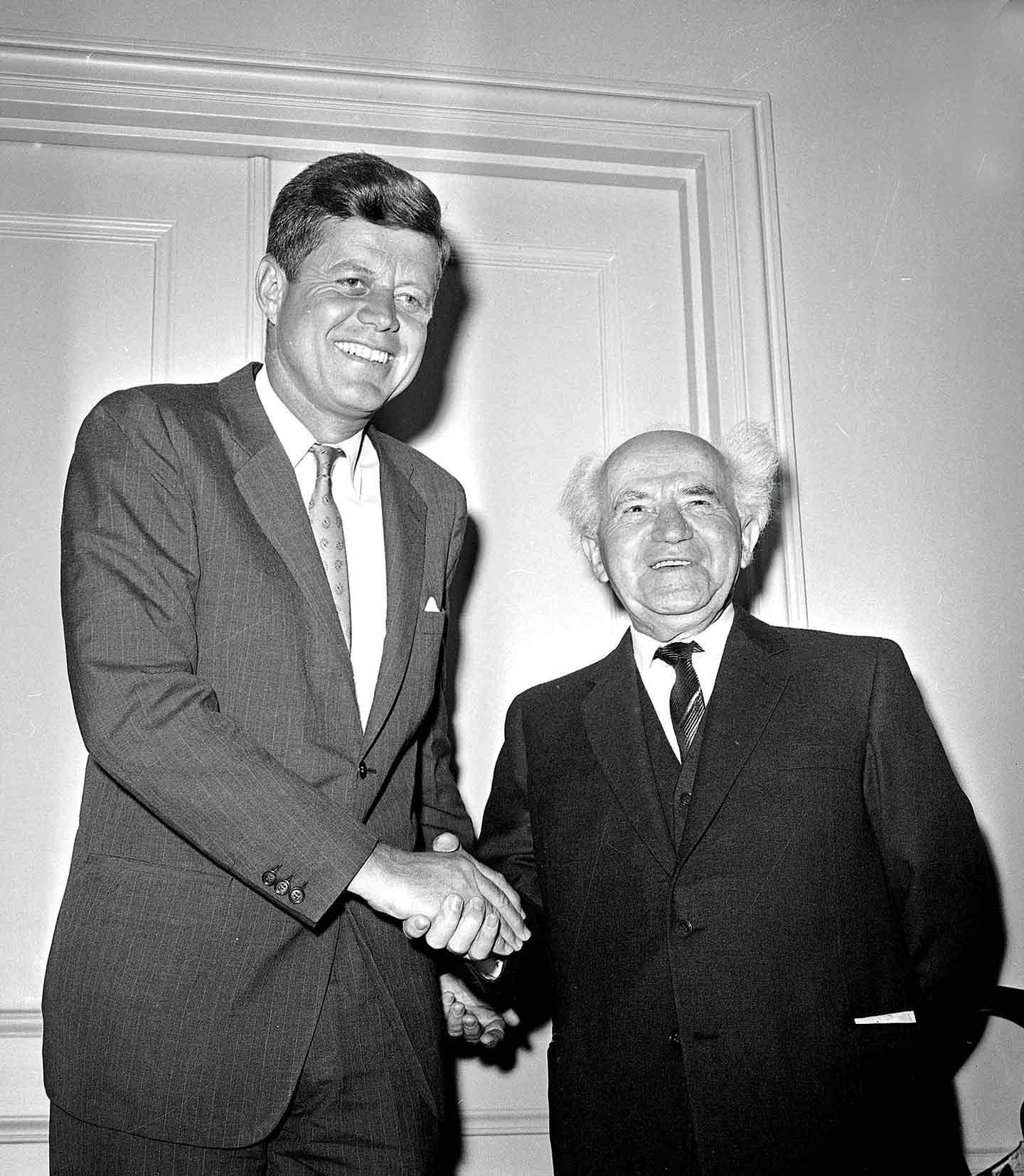 The American publishing industry does not skimp when it comes to Israel. It has provided us with bookshelves groaning with hagiographies of generations of Israeli leaders, acres of glossy coffee-table books lauding the Israeli miracle in the desert, and a plethora of studies of Israel and its relations with the world.

In the last category, studies of Israel’s relationship with the United States have a special place. Most are informed by a deep sympathy with Israel and staunchly defend the closest possible partnership between the two countries, even if they are occasionally critical of each other’s excesses. Much of this writing is by political scientists or former diplomats, whether Israeli or American, and concentrates on diplomacy and strategy.

Our American Israel: The Story of an Entangled Alliance

The better books in this extensive literature have a narrow temporal focus, like Michelle Mart’s Eye on Israel and Peter Grose’s Israel in the Mind of America, or take an international-relations approach, like Camille Mansour’s Beyond Alliance, John Judis’s Genesis, and Irene Gendzier’s Dying to Forget. As a result, even the best of these studies often ignore the cultural, intellectual, religious, and emotional forces that have also played a role in shaping Israeli-US relations since the end of World War II.

Amy Kaplan’s Our American Israel: The Story of an Entangled Alliance helps fill that void. A tour de force of both history and cultural studies, it is the first work to describe, fully and rigorously, America’s relationship with Israel in terms of the profound cultural ties that bind the two countries so closely together and to examine their evolving relationship over several generations. The title of Kaplan’s book is extremely telling: This is a story of how a national and colonial settler project in a distant and seemingly exotic part of the world was normalized and Americanized to the point that, in the American imagination, Israelis are seen as close kin. In a certain sense, for many Americans, Israel is a part of us.

Amy Kaplan is a historian of American culture and intellectual life at the University of Pennsylvania. Her work is widely respected among scholars in the field for its perceptive understanding of the crucial role of culture in history, and here she offers an exemplary examination of how American exceptionalism and the sense of Israel as a special place and people fostered by Zionism have mirrored each other. For Kaplan, this explains a crucial aspect of the extraordinary affinity between the two peoples: They share a belief that their nation’s existence was divinely ordained and that it is therefore exempt from the rules that apply to other nations.

In explaining this affinity, Kaplan draws on the two peoples’ parallel pioneering mythologies and their similarly disdainful views of the indigenous populations in the lands they rule over. She shows that American and Israeli forms of exceptionalism intersect in many ways—not just in the manner in which both countries understand their respective manifest destinies but also in the material means by which they have realized them through systematic colonization and the suppression of indigenous populations. Kaplan stresses the crucial importance of this process of suppression in the paradoxical victim-and-victor image that Israel has long enjoyed in the United States. Emphasizing the consequences of this long-standing sympathetic view of Israel for the usually invisible third party to this triangle—the Palestinian people—she also notes how the negative image of Palestinians in the American mind was largely shaped by hostile Israeli views of them, as well as by American Islamophobia and Arabophobia.

Many aspects of Our American Israel are revelatory, even for those who have long been immersed in this topic. Kaplan’s discussion of Leon Uris’s novel Exodus, as well as its film adaptation, places both hugely influential works precisely where they belong: firmly at the center of an entire generation’s understanding not just of Israel but of the entire Middle East. As Kaplan points out, a lyric from the theme song for the film—“This land is mine, / God gave this land to me”—is perhaps one of the most concise and gripping pieces of political persuasion about colonization, grounding territorial conquest in a divine injunction. Similarly brilliant is Kaplan’s analysis of the striking success of Joan Peters’s 1984 book From Time Immemorial, which had a powerful impact in persuading all those eager to believe that the Palestinians never existed as a distinct people, although reputable scholars universally debunked the book’s argument.

Among the other notable aspects of Our American Israel is Kaplan’s perceptive reading of how the 1982 Israeli invasion of Lebanon, the subsequent massacres in the Sabra and Shatila refugee camps, and the outbreak, five years later, of the first Palestinian intifada reshaped American views of Israel and the Middle East. While the Palestinians—erased from public consciousness after the 1948 Nakba (Catastrophe), the brutal forced exodus of hundreds of thousands from their homes during the war that led to Israel’s creation—were able to draw international attention to their cause in the 1960s and ’70s, they did not achieve a similar new salience in the United States. If they existed at all in the public consciousness, they were often seen as terrorists. The 1982 war and then the first intifada started to change this equation. Israel’s invasion of Lebanon and its two-month siege of West Beirut, in which more than 17,000 people—mostly civilians—died, had a strong impact on American public opinion. The televised images of this hail of fire raining down on a defenseless city could not be squared with the carefully cultivated image of plucky little Israel holding off hordes of murderous Arabs. This was “not the Israel we have seen in the past,” said John Chancellor of NBC News, speaking from a rooftop in West Beirut as buildings burned in the background. The news reports on the first intifada had a similar effect: Month after month of nightly images showing the shootings and savage beatings of young Palestinian demonstrators by Israeli soldiers further altered the way that many Americans viewed the conflict.

Even as Kaplan underlines the importance of these events in helping transpose the well-established David-versus-Goliath image of Israel and the Palestinians, she chronicles how agilely Israel’s American advocates responded and fought back, rapidly rebuilding the support that Israel had lost, by using a new set of tropes and arguments focused on the Holocaust, Israeli vulnerability, and Palestinian terrorism. Although Peter Novick’s monumental The Holocaust in American Life examines how Americans’ reactions to the Nazi genocide against the Jews affected their views of Israel, Kaplan’s book provides the most thorough study of how the close interconnection of the two was developed in the American imagination. Building on the work of Novick and other scholars, Kaplan analyzes the ways in which the Holocaust and Israel effectively became the twin pillars of American Jewish identity, with an emphasis on the former underlining the vulnerability of the latter. Thus the Holocaust now also “signified an imminent threat to the future of the Jewish state,” she writes. “A past atrocity in Europe came to foreshadow an impending apocalypse in the Middle East.”

Kaplan is similarly persuasive in her examination of Christian Zionism, particularly among evangelicals. With the rise of the Christian right in the 1970s, this has become a topic of increasing importance, helping explain the shift in the Republican Party toward unwavering support for the most extreme Israeli policies. Indeed, today some of the most passionate support for Israel comes from evangelical Christians, a fact underlined when Secretary of State Mike Pompeo, a fervent evangelical, told an interviewer that God may have raised Donald Trump to the presidency in order to protect Israel.

While the Trump administration’s effusive support for Israel may make it seem nothing has changed between the two countries, in fact much has been going on beneath the surface over the past half-decade. Public opinion on the left, particularly among the young and people of color, has shifted significantly where Palestine and Israel are concerned in recent years. Correspondingly, politicians appear to be willing to break from the lemming-like consensus that supports Israel’s every action. A new cohort of young, progressive women of color elected to Congress, including Rashida Tlaib and Ilhan Omar, have spoken out against Israeli policies and in favor of the pro-Palestinian boycott, divestment, and sanctions movement. In spite of the ferocious, often racist pushback against them, they have demonstrated that things can be said today about Israel and Palestine in Congress, on college campuses, and even, feebly, in the media that were simply unsayable in American public discourse only a few years ago.

This is therefore the right time for the appearance of Kaplan’s compelling book on the extraordinary nature of the American relationship with Israel over the last three-quarters of a century. Her deep historical grounding and highly sophisticated treatment of culture, the arts, and the media help explain the crucial—indeed, she would probably argue (and I would agree), the preeminent—role of novels, film, journalism, and other forms of cultural and artistic production in shaping the American view of Israel. Such an understanding is especially useful at a moment when large numbers of younger Americans are increasingly scornful of their elders’ often uncritical and misty-eyed views of Israel. Palestine today has a place in the American public debate that it never previously enjoyed, and with this increased attention has come greater critical scrutiny of the US-Israeli alliance and the myths we have been told. In this environment, Our American Israel could not be timelier, and it will likely find a broad audience not only in a number of academic fields but also among activists and nonspecialist readers. For this is a book that anyone can read with enormous benefit: It is beautifully written, carefully crafted, and entirely free of jargon.

The book will also likely provoke intense controversy, as it gently but deeply gores many sacred cows. But it will be welcomed by anyone seeking to understand and to depart from the myths that have been central to producing the American/Israeli/Palestinian conundrum we face today. Our American Israel ’s clear-eyed analysis helps show us how we ended up in this conundrum, and by doing so it also helps us map out a realistic path through which justice and equality for both peoples can replace the discrimination and oppression that are the status quo.