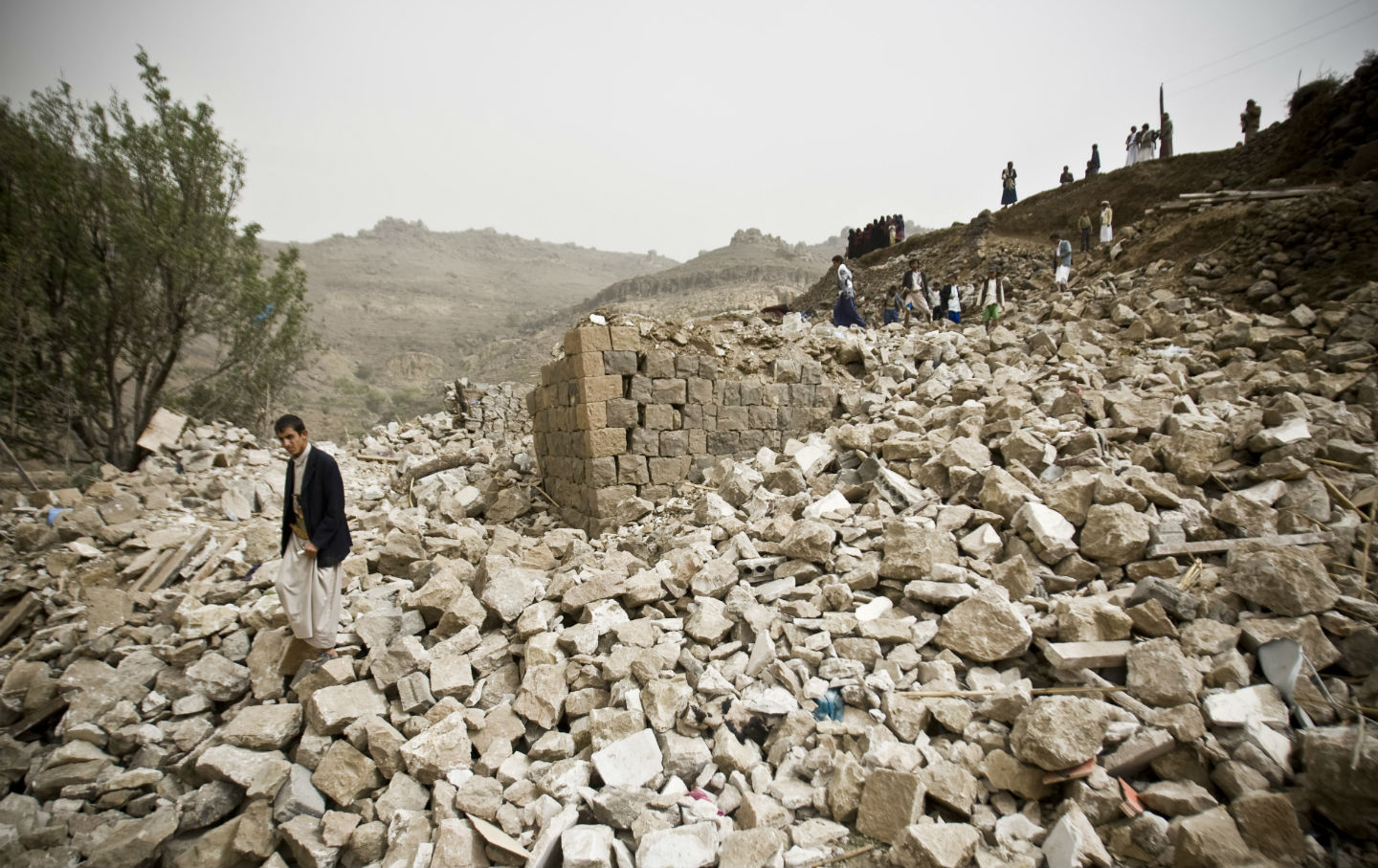 According to a report issued by the United Nations on March 27, Saudi Arabia’s war on Yemen’s Houthi rebels has resulted in what is quickly becoming a humanitarian catastrophe, with nearly 7 million people at risk of famine and more than 14 million people without access to medical care. According to the World Health Organization, 7,719 people have been killed and 42,922 have been injured since the start of the conflict in March 2015.  And yet the savage war against Yemen, led by Saudi Arabia and the United Arab Emirates, and aided to a significant degree by American weapons and intelligence, shows no sign of letting up.

Disturbingly, the US has been acting as a de facto co-belligerent since at least October 2015, when President Obama gave the green light to Lockheed Martin to sell the Saudis four “multi-mission” warships totaling about $11.25 billion. This came only a month after the Saudi-led military coalition earned worldwide censure for its bombing of a wedding party in southern Yemen, killing 135 people. At the time, the Obama administration issued a routine and hypocritical “expression of concern” over the incident.

Last week, The Washington Post reported what many had long suspected: that Trump intends to pick up where Obama left off and scale up America’s involvement in the ongoing catastrophe.

The administration, according to the Post, is considering “whether to provide support for a proposed UAE-led operation to push the Houthis from the port of Hodeida, through which humanitarian aid and rebel supplies pass.” “Approval of the request,” reports the Post, “would mark a significant policy shift.” This is perhaps not entirely surprising given the fact that Trump has stacked his foreign policy team with Iran hawks who share Saudi Arabia and Israel’s illusory apprehensions of a revanchist Iran.

Meanwhile, the US foreign-policy establishment seems all too eager to help compound the administration’s error.

Trump has stacked his foreign-policy team with Iran hawks who share Saudi Arabia and Israel’s illusory fears of Iran.

On March 28, Foreign Relations Committee chairman Bob Corker introduced the Countering Iran’s Destabilizing Activities Act of 2017, which, if implemented, would prohibit the president from lifting sanctions on Iran (and empower him to add more), thereby making it impossible for the United States to abide by the terms of the P5+1 nuclear agreement.

And last week, the Senate committee heard testimony from Michael Singh of the neoconservative Washington Institute for Near East Policy, who told the senators that “Iran’s efforts to project power have destabilized Lebanon, prolonged the Syrian civil war, and fueled resentment among Arab Sunnis and the rise of jihadist groups like the Islamic State.”

Blaming Iran for the rise of the Islamic State is similar to the neocon mantra that “Assad created ISIS” in that both views studiously ignore the fact that ISIS views both Iran and Assad as its archenemies and that, according to former secretary of state John Kerry, Iran has been fighting, not funding, ISIS—unlike some of our purported “allies” in the region.

Yet some much-needed pushback against the rush toward confrontation with Iran, particularly with regard to the administration’s plans in Yemen, is emerging. This week, a bipartisan coalition of House members, including Wisconsin Democrat Mark Pocan, California Democrat Ted Lieu, Michigan Republican Justin Amash, and North Carolina Republican Walter Jones are circulating a letter to the president that objects to the administration’s escalation in Yemen. The representatives write that they are “troubled by news reports indicating that Al Qaeda in Yemen has emerged as a de facto ally of the Saudi-led militaries with whom your administration aims to partner more closely.”

Why release the letter now? “Members have long been troubled by the US providing the Saudis with air refueling and targeting assistance; in effect, acting as a co-belligerent,” a congressional staffer familiar with the issue told me.

Equally troubling to these House members is that the administration seems intent on bypassing Congress. Indeed, unlike previous military interventions, such as those in Syria under Obama, the administration is not even bothering to cloak the Yemen operation in a veneer of legality by citing the 2001 Authorization for the Use of Military Force, which sanctioned the use of military force “against those nations, organizations, or persons” determined by the president to have “planned, authorized, committed, or aided the terrorist attacks that occurred on September 11, 2001.”

And for good reason, as the congressional letter makes clear: “The Houthis have never been ‘associated forces’ to Al Qaeda; they are Zaydis, a branch of Shiite Islam, and strongly oppose the Sunni Al Qaeda, which promotes sectarian violence against Shia.”

But in siding with the Saudis and the Emirates against the Shia Houthis we are now lending aid and support to the ideological heirs of those who attacked us on September 11.

The driver of this myopic and sinister policy is widely believed to be Defense Secretary James Mattis. The congressional staffer told me that Mattis “has been given a pass by Democrats because he is seen as a serious, moderating influence on Trump—but it is Mattis who is driving this.”

Trump’s Generals Are Considering a Wider War in Yemen

Trump Doesn’t Deserve Praise for His Raid in Yemen

Indeed, as The Washington Post reported, it was Mattis who believes that a policy of “limited support” for Saudi Arabia and the UAE in Yemen would help combat a “common threat”—that is to say, Iran. In this context it is worth noting that in February, Mattis wanted to interdict an Iranian vessel in international waters, which, if it had been carried out would have constituted an act of war.

Yet Washington’s foreign-policy establishment seems to be blithely unperturbed by such a prospect. And there should be little mystery as to why: the stranglehold Saudi Arabia has on policy-makers and thought leaders in Washington, who have allowed the Wahhabi kingdom’s obsession with Iran to become their own.1