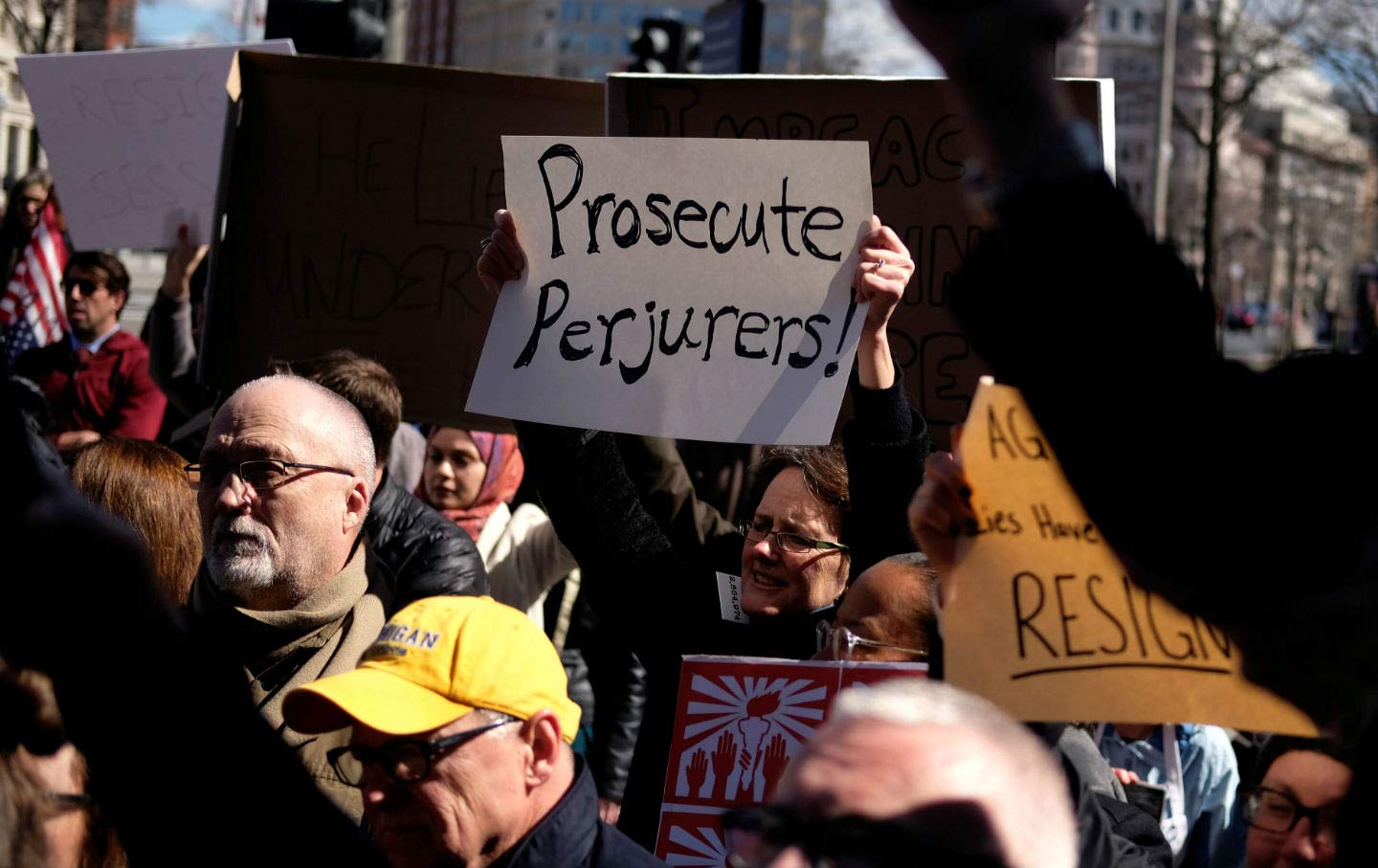 Demonstrators hold a protest rally outside the Department of Justice in Washington, DC, on March 2, 2017. (Reuters / James Lawler Duggan)

A majority of voters say that what Donald Trump refers to as “the Russia thing” is “making them nervous about the future of the country,” according to a Morning Consult/Politico survey released last week. But at present, no credible, independent investigation is being conducted into what US intelligence agencies described as a “multi-faceted” Russian “influence campaign” to help Trump defeat Hillary Clinton last year that blended “covert intelligence operations—such as cyber activity—with overt efforts by Russian Government agencies, state-funded media, third-party intermediaries, and paid social media users or ‘trolls.’” Whatever one thinks of those conclusions, there’s no question that multiple senior figures in Trump’s inner circle attempted to conceal over a dozen covert contacts with Russian officials and individuals with close ties to the Kremlin. The public has a pressing need to get to the bottom of this. Only a transparent, comprehensive, and nonpartisan probe can restore some confidence in our electoral system.

Former FBI director Robert Mueller, the special counsel tasked to look into any possible collusion between the Trump campaign and the Russians, has a reputation as a thorough investigator. But his mandate is to look at criminal activity. As David Frum noted at The Atlantic, “a prosecutor investigating a crime can often discover non-criminal bad actions by the people he is investigating. If those bad actions do not amount to crimes, the prosecutor is supposed to look away.” So while Mueller may well uncover a criminal conspiracy, his investigation is unlikely to shine any light on the broader influence campaign. Just as an example, Senator Mark Warner claimed that the Kremlin employed over 1,000 people to churn out damning fake news stories about Hillary Clinton and spread them across social media in key states, which undermines public trust but on its face wouldn’t appear to violate any laws. And his probe may take years to complete.

The House and Senate investigations are run by the same Republicans who have repeatedly blocked efforts to get Trump’s tax returns.

The House and Senate investigations have reportedly ramped up in the wake of Trump’s firing of FBI director James Comey, but they’re run by the same Republicans who have repeatedly blocked efforts to get Trump’s tax returns. Representative Devin Nunes, who recused himself after trying to run interference on behalf of the White House, still holds his committee’s subpoena power. In late April, Tim Mak reported for The Daily Beast that, three months after its launch, the Senate investigation did “not have a single staffer dedicated to it full-time, and those staff members working on it part-time [did] not have significant investigative experience.” When James Comey tried to talk to the committee about Russia earlier this month, Republican senators grilled him about Hillary Clinton’s e-mail server. These investigations may eventually yield results, but they’re unlikely to give the public a rigorous and complete accounting of what happened in 2016 in the foreseeable future.

This is the backdrop for the next major test of the endurance of the resistance against Trump. On Saturday, organizers of the March for Truth expect people to take to the streets in 140 cities across the United States and abroad. Their demands will be simple and uncommonly focused. They’re calling for an independent commission to look comprehensively at the questions of outside interference in the election modeled on the 9/11 Commission; for the existing congressional inquiries to be “properly resourced and pursued free of partisan interests”; for any unclassified information pertaining to irregularities surrounding Trump’s election or conflicts of interest in office to be made publicly in a timely manner; the release of Trump’s tax returns in order “to clarify his business interests and obligations to any foreign entity,” and for any criminal actions that might be unearthed to be fully prosecuted.

The protests began as the brainchild of three people who became friends on Twitter. Jordan Uhl, Justin Hendrix, and Andrea Chalupa had no prior organizing experience before launching the March for Truth. (Chalupa’s sister, Alexandra, is a former DNC operative who started looking into possible ties between former Trump campaign manager Paul Manafort’s connections to pro-Russian elements in Ukraine in 2015.) Uhl laughed when he told me he doesn’t even like protests. “I’m not a big crowds person,” he said.

Uhl says they were motivated by the lack of seriousness they saw in the congressional probes. An important tell was Tim Mak’s piece about how woefully understaffed the Senate investigation is. “We realized we should do something,” says Uhl. “We said that we should organize a protest or something, not thinking that it would be very big. So Andrea and Justin took New York, and I would do DC, and we just put it out on Twitter that we’re going to do this March for Truth, and if you care about this issue and this is what you want from your elected officials, then you should organize one in your city.”

Then James Comey was fired, and within a few days Marches for Truth were in the works in 40 cities. At that point, says Uhle, “a bunch of other groups with more experience doing these kinds of things approached us and we took on a number of partners.” They included Indivisible, the Townhall Project, the Working Families Party, and a dozen others, listed here. The Women’s March served as an inspiration, and the resistance groups stepped in with much-needed infrastructure. “It’s a new type of activism,” Uhl says. “This is about as grassroots as you can get.”

Big turnouts this Saturday would run headlong into Donald Trump’s claim, echoed by others, that allegations of Russian interference in the election and Trump’s refusal to release his tax returns are both stories that the public at large doesn’t care about and are just an obsession of Democratic leaders and Beltway reporters.

And it’s an especially important time to keep up the pressure on Congress. With a constant dribble of damning stories about people close to Trump making covert contacts with Russian officials, every day it becomes harder for Republicans to run interference for the White House. Tens of thousands of people taking to the streets to demand transparency might offer some clarity on where the American public is, and could prove to be a tipping point in their thinking.

You can find a march near you at this link or click here for tips on organizing an event in your own community.

Ed’s note: This post has been updated to include information about Alexandra Chalupa’s connection to the investigation of alleged Russian hacking during the 2016 election.