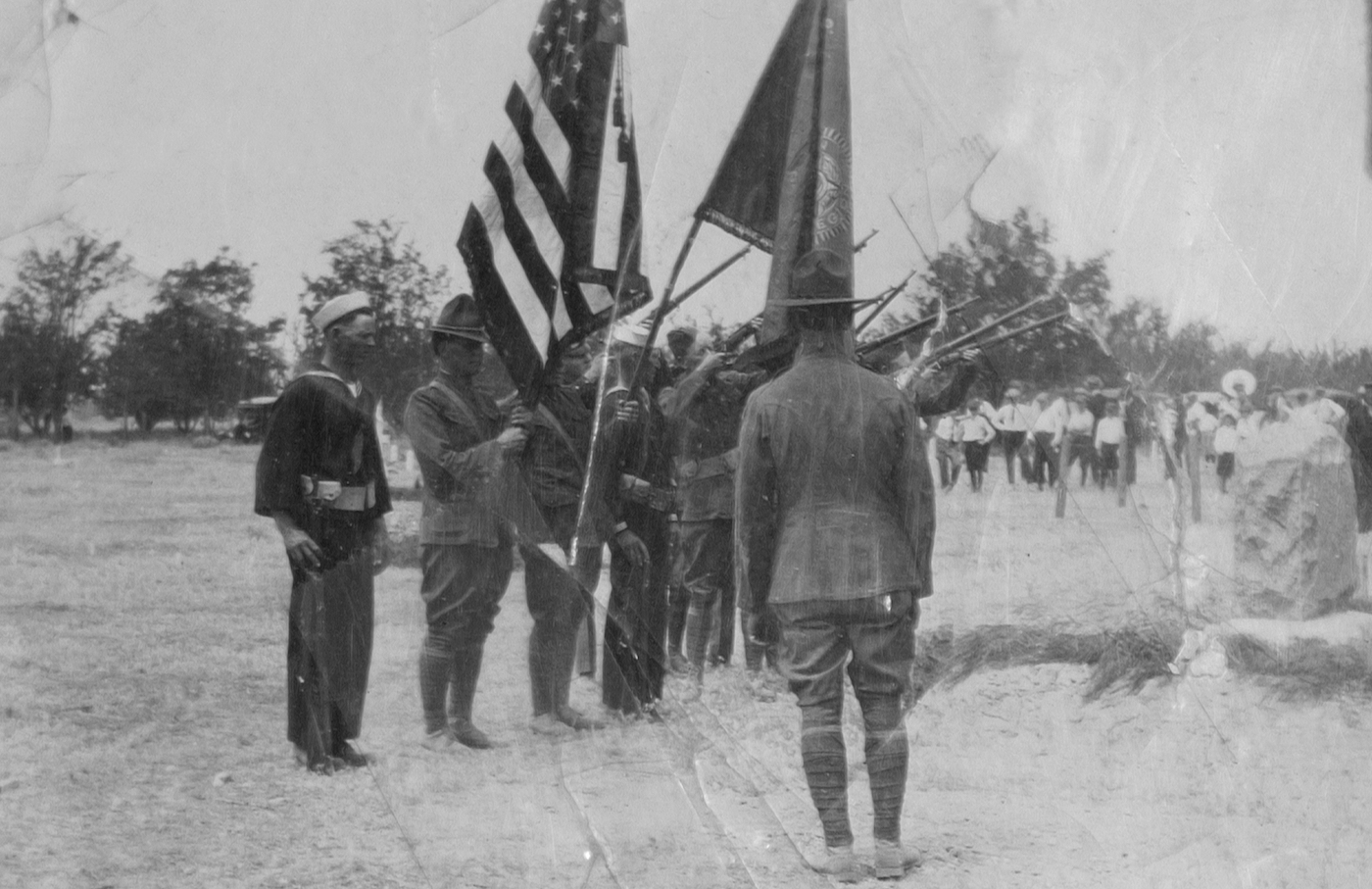 Memorial Day, 1918, at a cemetery in White Bluffs, Washington. In 1943, the cemetery was relocated to make way for the Hanford nuclear reservation, part of the Manhattan Project to create the atomic bomb. In early May of 2017, a tunnel at the Hanford site used to store contaminated material collapsed, leading to a declaration of emergency by the federal government. (United States Department of Energy)

Ninety-nine years ago, The Nation published an editorial about Memorial Day. The First World War was in full swing, and the editors took the moment to reflect on what it was like to commemorate those who died in battle years earlier while young Americans were dying even then in a new war, far away.1

The piece began with an invocation of Memorial Days past, in the decades after the Civil War, when Americans throughout the country went through their rituals of commemoration for those they had lost. Memory was painful, but the rituals of remembrance were not altogether unpleasant:2

To most Americans of the present generation Memorial Day brings fragrant memories, as they live over again some soft summer afternoon of years long gone. They see once more a brave little procession, headed by the village band, with white-haired veterans hobbling along in the place of honor, wending its way to the cemetery on the hillside. And there they see a few scattered graves, each neatly mowed in preparation for the day, each marked with its flag, each showing the spot where sleeps one of the honored dead of the great struggle of half a century ago. They see the little children, dressed in white, their arms filled with flowers, which they strew over the green mounds, while an occasional tear drops from the eye of some sister or wife, of a generation gone, but whose hurt the years even yet have not wholly healed. And when the simple ceremony is done, they see the little group scatter again to their homes, and the quiet afternoon draws to its close in all the gentle peace of the early summer, while the thrush from the neighboring thicket sounds taps for the hero dead. What American does not cherish such recollections? What one does not recall the impression of profound peace with which the day came to its end?3

How things had changed:4

That was the Memorial Day of long ago. To-day the village and the city street once more see their processions, but they are of khaki-clad young men, faring forth to the bloody fields of France. Again the bands play, but they summon us to war. And every village throughout the country has already sent dozens of its sons—how many already sleep across the water! No longer is war a dread, forgotten dream of old men, but once again we stand face to face with its maimed bodies and shattered minds and broken hearts. Into the fiery furnace wherein our fathers walked our sons are passing, from east and west, from north and south—marching, marching, the young and the strong, the workers, the poets, the dreamers, marching, on this Memorial Day, on to the fields of France. This is not a day of memory, but a day of prayer.5

Then the editorial takes a turn.6

“Shall we learn no wisdom from this day?” The Nation asks. Observing that the hatreds of the Civil War years had now faded into the past, the editorial suggests extrapolating the lessons of that experience into the present day and the present war. Abraham Lincoln’s insistence on reuniting “with malice toward none” ought to be applied globally at the close of a global war, the editors argued. But Lincoln’s lesson had not been heeded. Instead, the Civil War had been followed by “the dark and difficult years of reconstruction. The lack of sympathy, the misunderstandings, and the evil passions that the war had intensified were carried over into the work of those years.”7

Dreams of justice have heartened the oppressed wherever the word America was spoken. We shall not lose our faith.

It was popular at the time to view the Reconstruction era this way: as an unfortunate, regrettable continuation of those unnecessary contentions that had disunited the states in the first place. Black Americans were blamed, implicitly or otherwise, for pushing too hard for civil and political rights after the Union’s victory in the war, and their supporters in the Reconstruction-era Congress—above all Thaddeus Stevens, the leader of the Republican Party in the House of Representatives—were derided as madmen, of twisted disposition, inveterately hostile to compromise, the moral equivalent of the slaver secessionists.8

It was this negative appraisal of Reconstruction, put forward most noxiously by Columbia University historian William Archibald Dunning, that held sway in the early decades of the 20th century. And though The Nation’s publisher during the First World War, Oswald Garrison Villard, had helped found the NAACP in 1909 and was a friend of W.E.B. Du Bois—whose Black Reconstruction in America would thoroughly rebut the Dunning School interpretation of the period, showing that it represented a profoundly radical experiment in multiracial democracy—the magazine still evidently adhered to that understanding of the period in the spring of 1918, when The Nation published its reflections on the meaning of Memorial Day in a time of global war.9

“Shall we forget the lesson” of Reconstruction, the editorial went on, “or shall we rather on this day highly resolve to put away ignorance and unreason and hatred, to put on knowledge and understanding, remembering that when this war is done, then there must come a work of world reconstruction? A half-century hence there will come another Memorial Day, when our children’s children will look back on our deeds as we this day review the work of that generation gone. Shall they remember us as we remember Lincoln and Lee, or as we recall Thaddeus Stevens and the other stern apostles of hate?”10

The implication of the magazine’s comparison between the Reconstruction that followed the American Civil War and the “world reconstruction” that would follow the World War seems to have been that the Allied victors shouldn’t press the defeated nations—Germany, especially—too hard, or else it would risk repeating the mistakes that had been made in the United States 50 years earlier.11

Toward the end of the World War and into the negotiations at Versailles for the terms of peace, The Nation warned against what would happen if Germany was punished too severely. This didn’t always take the form of warnings inspired by that problematic interpretation of the Civil War and Reconstruction, but it’s intriguing to follow the line of thought, given subsequent events. Germany did struggle to recover. The economy did crater. Demagogues did rise to power, promising to make Germany great again. What all this adds up to is a question deserving further meditation.12

What we do know is this: Just last week, New Orleans removed its 16-foot statue of Robert E. Lee, while on a recent visit to Lancaster, Pennsylvania, I was pleased to find that Thaddeus Stevens’s home is currently being renovated to open as a museum.13

The editorial marking Memorial Day of 1918 ends with this plaintive plea:14

To-day, and in the future, we shall gain no victory if we lose faith in our dreams: “where there is no vision, the people perish.” Our dreams are dreams of liberty, that have drawn the world’s myriads across the seas; dreams of justice, that have heartened the oppressed wherever the word America was spoken; dreams of opportunity, that have gleamed before the eyes of the humble and the poor; dreams of brotherhood and peace, that have beckoned the warring peoples of Europe in years past. They are dreams of the America that never yet has been, the American that still remained to build, the America that now can never be except as part of a world freed from the burden of mutual national distrust and hatred and deceit. The America and the world of our dreams—how far away they seem on this Memorial Day! And yet, hearing the hour’s stern call, we cannot forget the dreams, for this is a day of dreams.

Subscribers to The Nation can access the magazine’s 152-year archive here.