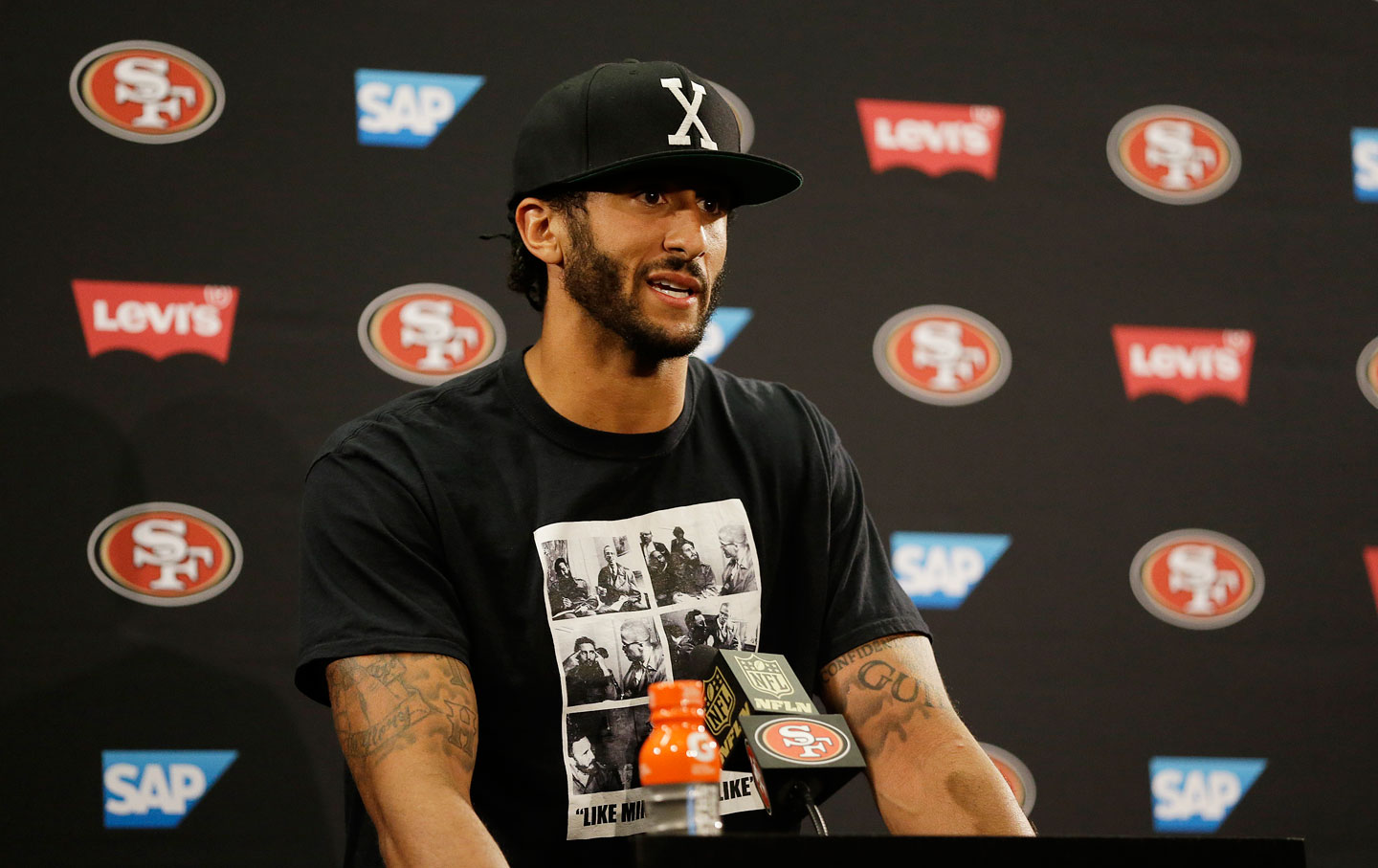 There has been a lot of analysis—both thoughtful and noxious—of San Francisco 49ers quarterback Colin Kaepernick’s decision to sit down during the national anthem in the past few days. Unfortunately, there has been less conversation about the politics behind his action.

Instead of reckoning with the substance of his critique, much of the media coverage has fostered an abstract discussion about patriotism and etiquette—centering the question of whether he has the “right” to protest rather than examining what it is he’s trying to say.

As Charles Modiano breaks down brilliantly, this is the wrong approach:

Colin Kaepernick’s deliberate act of protest to sit out the national anthem caught the nation’s attention, and this initial sentence framed most media headlines: “I am not going to stand up to show pride in a flag for a country that oppresses Black people and people of color.” But the meat of Kaepernick’s cause actually came two sentences later: “There are bodies in the street and people getting paid leave and getting away with murder.”

Hold it right there: “Getting away with murder.” That is the story.

Kaepernick makes it clear that his action was connected to the movement against police violence. But a closer examination of his 18-minute press avail on Sunday reveals even more about his motivations and thinking. The transcript itself contains the most effective defense against the legions trying to distort or delegitimize his actions.

Responding to reporters, Kaepernick demonstrated a methodical and, whether you agree or disagree, ideologically consistent rationale for sitting out the anthem. Kaepernick is appalled by police brutality, which he sees as an expression of bipartisan, government-sanctioned violence. He wants to use his platform to raise awareness and is willing to risk his job to do it. He is, as ESPN columnist Bomani Jones put it, “asking for justice, not peace.”

In the presser, Kaepernick said:

These aren’t new situations. This isn’t new ground. There are things that have gone on in this country for years and years and have never been addressed, and they need to be. There’s a lot of things that need to change. One specifically? Police brutality. There’s people being murdered unjustly and not being held accountable. People are being given paid leave for killing people. That’s not right. That’s not right by anyone’s standards.

When asked if he would continue to sit during the anthem, he answered,

He was immediately asked if this stance meant he was anti-military, and he responded:

I have great respect for the men and women that have fought for this country. I have family, I have friends that have gone and fought for this country. And they fight for freedom, they fight for the people, they fight for liberty and justice, for everyone. That’s not happening. People are dying in vain because this country isn’t holding their end of the bargain up, as far as giving freedom and justice, liberty to everybody. That’s something that’s not happening. I’ve seen videos, I’ve seen circumstances where men and women that have been in the military have come back and been treated unjustly by the country they have fought for, and have been murdered by the country they fought for, on our land. That’s not right.

One of the more outrageous–and offensive—arguments from the sports commentariat is that because Kaepernick is biracial and was raised by white parents in a middle-class suburb, he could not understand “oppression.” This charge has been almost uniformly made by white, right-wing sportswriters. Kaepernick was asked if he “personally” felt oppressed, and he said:

There have been situations where I feel like I’ve been ill-treated, yes. This stand wasn’t for me. This stand wasn’t because I feel like I’m being put down in any kind of way. This is because I’m seeing things happen to people that don’t have a voice, people that don’t have a platform to talk and have their voices heard, and affect change. So I’m in the position where I can do that, and I’m going to do that for people that can’t.

Kaepernick also told his own story of being black in the United States:

I’ve had times where one of my roommates was moving out of the house in college, and because we were the only black people in that neighborhood, the cops got called and we had guns drawn on us. Came in the house, without knocking, guns drawn on my teammates and roommates. So I have experienced this. People close to me have experienced this. This isn’t something that’s a one-off case here or a one-off case there. This has become habitual. This has become a habit. So this is something that needs to be addressed.

Another argument some have made is that, while Kaepernick’s message is fine, his actions are not. That not standing for the flag is the “wrong way” to do things. Again, he had a thought-out response:

I don’t understand how it’s the wrong way. To me, this is a freedom that we’re allowed in this country. And going back to the military, it’s a freedom that men and women that have fought for this country have given me this opportunity by contributions they have made. So I don’t see it as going about it the wrong way. This is something that has to be said, it has to be brought to the forefront of everyone’s attention, and when that’s done, I think people can realize what the situation is and then really [e]ffect change.… And the fact that it has blown up like this, I think it’s a good thing. It brings awareness. Everybody knows what’s going on and this sheds more light on it. Now I think people are really talking about it, having conversations about how to make change. What’s really going on in this country. And we can move forward.

Kaepernick was asked about concern that he would be seen as indicting all police and again, in a focused manner, brought it back to a political argument about how broken our system of policing has become. “There is police brutality,” he said.

People of color have been targeted by police. So that’s a large part of it and they’re government officials. They are put in place by the government. So that’s something that this country has to change. There’s things we can do to hold them more accountable. Make those standards higher. You have people that practice law and are lawyers and go to school for eight years, but you can become a cop in six months and don’t have to have the same amount of training as a cosmetologist. That’s insane. Someone that’s holding a curling iron has more education and more training than people that have a gun and are going out on the street to protect us.

He was asked whether this was because it was an election year, which is its own statement about how we view politics in this country: something to practice for a few months every four years.

Lastly, Kaepernick was asked whether he was concerned about getting cut and said, “I don’t know. But if I do, I know I did what’s right. And I can live with that at the end of the day.”

It is inspiring to see an athlete who cares more about the world than their own ambitions. And it is stunning that so many people are saying that an NFL player this thoughtful and selfless is somehow a “bad” role model, in a league so rife with scandal from the owner’s box to the locker room.

It is also pathetic that so many in the sports media, who a few months ago were praising the legacy of Muhammad Ali, are coming down so ferociously on Colin Kaepernick. As if sports and politics can mix only in the past tense, and racism is something that can only be discussed as a historical question. People can choose to agree or disagree with Kaepernick’s analysis or arguments, but they should deal with the reality of the facts he’s risking his career to bring into light.