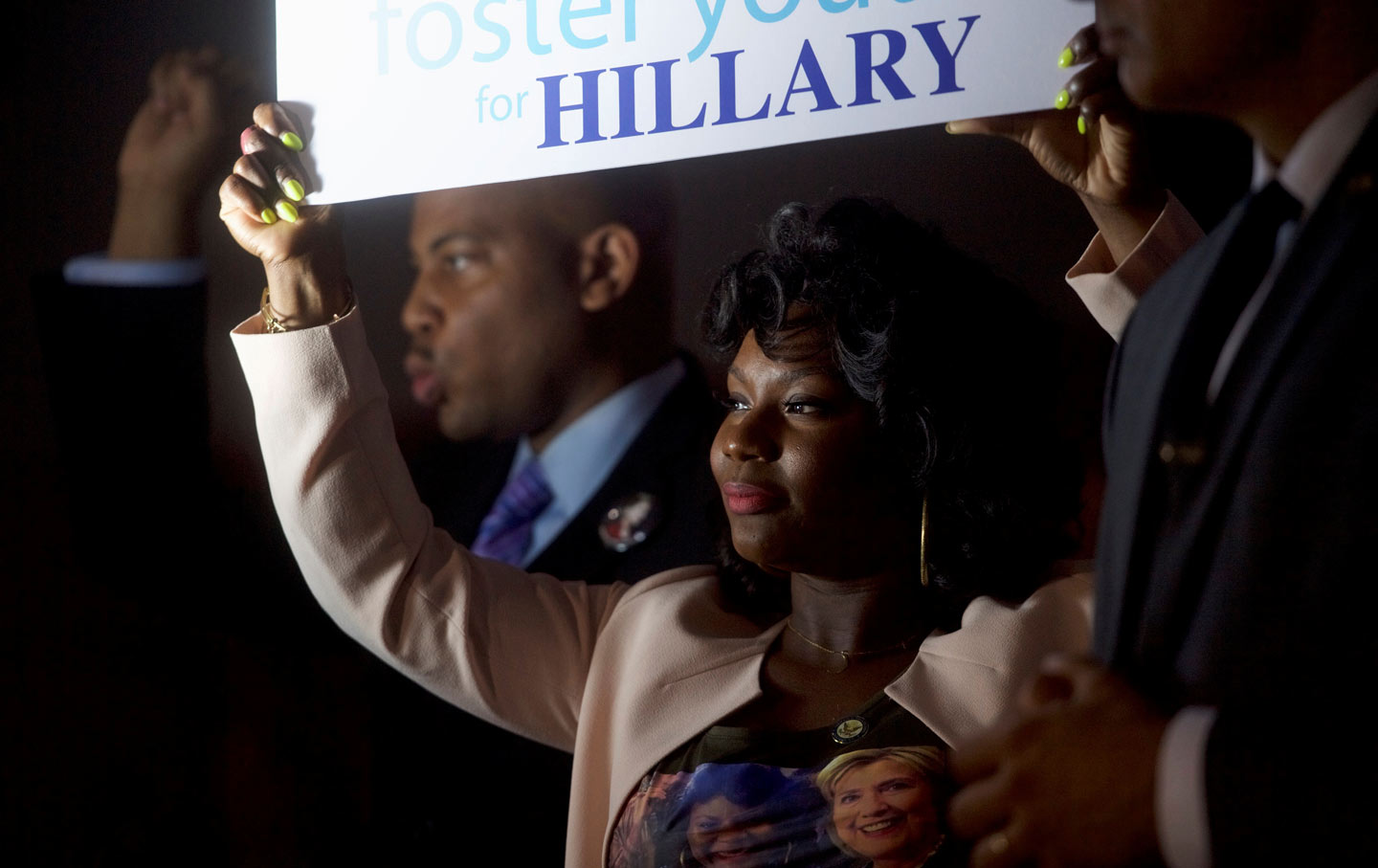 A supporter watches Hillary Clinton during a rally in Cleveland on August 17, 2016. (Reuters / Mark Makela)

This is a column for all you leftists, liberals, progressives, feminists, Democrats—whatever you call yourselves—who are feeling passive, underwhelmed, downhearted, or paralyzed about the upcoming election. All right, you say, you’ll hold your nose and vote for Hillary Clinton, but you haven’t been knocking yourself out like you did for Barack Obama in 2008 or even 2012. “This election is getting really scary, yet I do not feel motivated to get active,” wrote one friend when I sent out a call for comments about enthusiasm, or the lack thereof. There are a lot of you out there.

Maybe you’re still mourning Hil­lary’s victory over Bernie Sanders. (Bernie has gotten over it and urges you to support her.) Maybe you’ve been assuming Trump will lose, so you can afford to relax and rely on herd immunity, like an anti-vaxxer. Maybe you’re having too much fun in the circular firing squad of Twitter and Facebook: Why spend your evenings phone-banking or your weekends in swing states canvassing when you can impress your friends with zingers about what a sellout Clinton is? If she loses, it will be her own damn fault, right?

The Sanders campaign moved the party to the left. Why not accept victory and get on with defeating that racist buffoon, Donald Trump?

No. If she loses, and you did nothing to help her win, it will be your fault. Are you assuming someone else is going to do the work you’re too tired or too dejected or too good for? Are you picturing a middle-aged Hillarybot who sleeps with Lean In under her pillow knocking on those doors? Because even if she is, you need to be too. Remember, a Donald Trump presidency isn’t all that’s at stake: What if the Democrats don’t retake the Senate because not enough people turn out for Clinton? And if those candidates further down-ticket—the congresspeople and state legislators and judges and local pols—lose, how are you going to feel about that? In a presidential year, people go to the polls to vote for the president, not town supervisor. If turnout is down, other candidates go down with her.

Trump voters don’t have your qualms. They can’t wait to vote, and in the meantime they’re doing everything they can to fluff up their feathers and make themselves look big. Do you have a lawn sign or a bumper sticker for your candidate? They do, and I don’t care what the studies say about whether or not they matter. Signs and stickers show energy and pride and conviction. “I went to garage sales yesterday in a white neighborhood in Xenia,” reports one Ohio friend, “and counted nearly 50 Trump signs and one Clinton.” Signage creates an impression of what’s normal and acceptable in a community. It’s discouraging, even intimidating, if your own views are invisible. I’ve heard from people who are actually afraid to make their support for Hillary public. Maybe they wouldn’t feel that way if more of us showed our colors.

As I’ve argued in this space before, Hillary is more progressive than she looks to other progressives. Like everyone else, we’re drenched in the mainstream media, which have been obsessed with e-mails, pneumonia, and deplorables—stories that fit the predetermined master narrative of dishonesty, snobbery, and unlikability. Remind yourself what Clinton actually stands for. In the Senate, she and Bernie voted the same way 93 percent of the time. She supports raising taxes on the rich and on corporations, debt-free public college, and an end to the Hyde Amendment—which President Obama, who you knocked on all those doors for, accepted as a done deal. What about the upcoming Supreme Court vacancies? If Clinton loses, we’ll be living with a right-wing high court for the rest of our lives. Clinton’s not the second coming of Bernie Sanders, but the Sanders campaign has moved the whole party to the left: The platform is the most progressive in our lifetime, and Clinton is now tied to that shift. Why not accept victory and get on with defeating the racist, misogynist, lying buffoon, Donald Trump?

I’ve heard from several people who complain that they can’t figure out the campaign website and, anyway, Hillary hasn’t asked for their help. I agree: Hillary really should have gotten on the phone and invited each and every one of you down to her office. She’s so aloof! But as my editor Emily Douglas says, “People need to be willing to make some effort to participate in democracy. It’s not like a new iPhone—engineered to feel intuitive and inevitable.”

Still, I know what it’s like to feel befuddled online, so I’m going to make it easy for you. The link for volunteering with the Clinton campaign is hillaryclinton.com/volunteer. Go there now. You’ll find the page quite user-friendly; it takes about 30 seconds to sign up. Once you’re set up, the campaign will keep you up to date on all of its activities: buses going to swing states on the weekends, sites for phone-banking, dates for local canvassing. It even has an option that lets you phone-bank from home. So if you only have a few free moments in your day, or can’t get out of the house easily, just make yourself comfy on the sofa and call a few voters. It isn’t hard. Post the link on your Facebook page and get your friends involved. If working with Hil­lary’s campaign is a bridge too far for you, MoveOn.org is planning a massive get-out-the-vote drive in swing states. Sign up with the MoveOn text team and use your cell phone to recruit other volunteers for campaign events up and down the ticket.

Here’s a special plug for donations to get-out-the-vote groups in North Carolina, where Hillary has a real shot. Challenger Deborah Ross could defeat Richard Burr for his Senate seat, and the Dems could actually win back the state from the right-wing bigots running it now. North Carolina has some of the most restrictive ballot laws in the country, so helping groups like Democracy NC, the A. Philip Randolph Institute, the North Carolina NAACP, and Common Cause NC get voters to the polls is more important than ever.

Politics is social. If you’re hanging out with your fellow political depressives, no wonder you’re down! So get up and get busy—and bring them along while you’re  at it.

Listen to Katha Pollitt on this week’s episode of the Start Making Sense podcast.