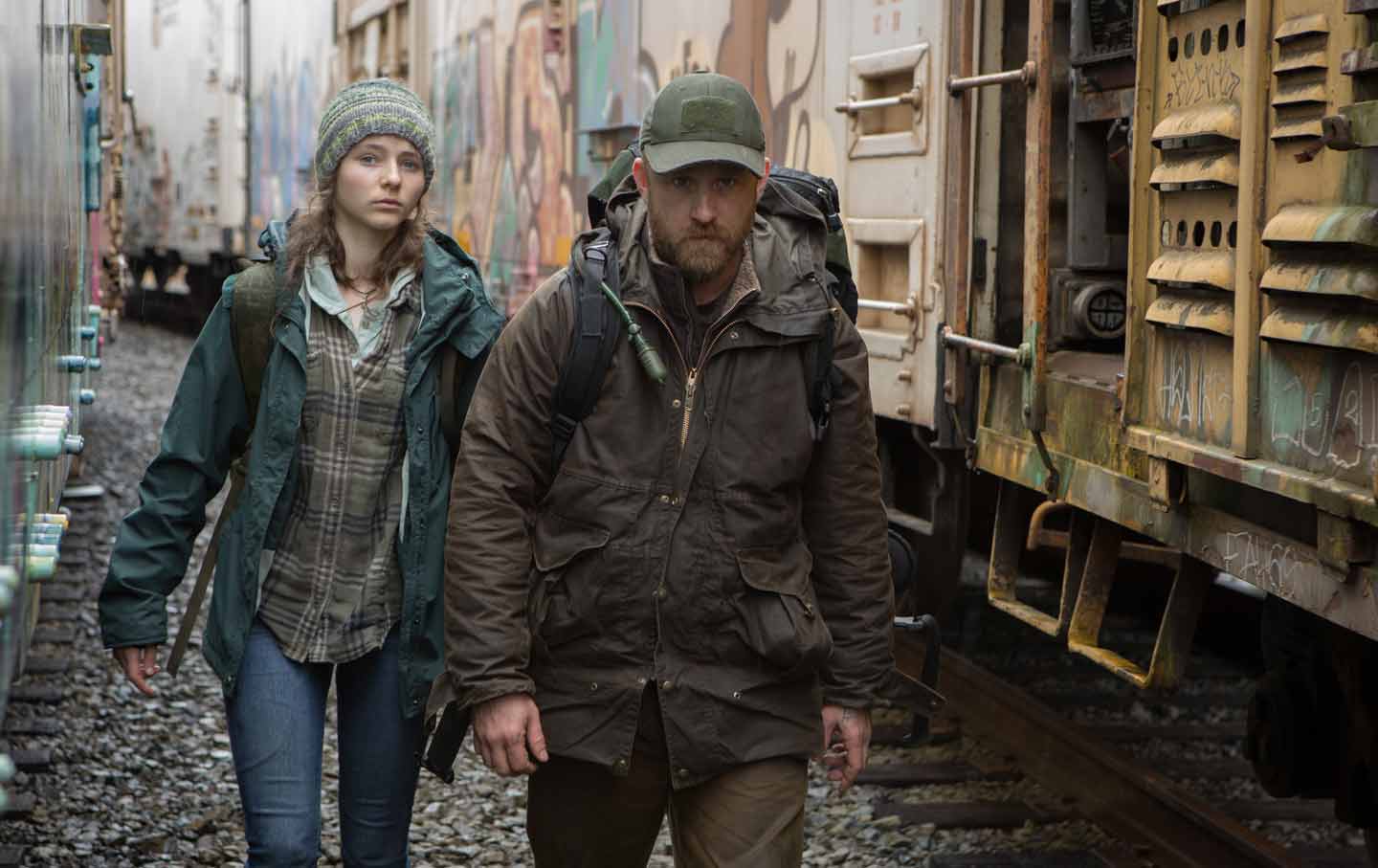 Thomasin McKenzie and Ben Foster in Leave No Trace. (Courtesy of Bleecker Street)

Bees creep peaceably over the hands of Thomasin McKenzie, the teenage actress cast as the protagonist of Debra Granik’s Leave No Trace. It’s not an editing trick; you see McKenzie’s calm, heart-shaped face and unprotected fingers within a single shot, as the bees settle onto her palms and explore. Those same hands also spend a few minutes of screen time cradling a plump bunny and stroking its ears. Rabbits can be nervous creatures, apt to deliver efficient kicks, but this one relaxes into warm lumpishness with McKenzie, despite having Chainsaw as its name.

Set in the verdant world of the American Northwest, Leave No Trace begins with close-up views of fecund branches, glistening spiderwebs, and hollows of knee-high ferns, and ends with a panorama, seen from above, of a man disappearing into a mountain thicket. This rustling landscape might not quite pass for a new Eden—one of America’s long-favored sites of imagination—but it’s nevertheless suffused with a vibrant yet soothing light (thanks to Michael McDonough’s cinematography) and seems ready to absorb and shelter, rather than threaten. This is where McKenzie’s character, Tom, and her father, Will (Ben Foster), are first seen making their home, without running water, electricity, or fixed walls, in a nature that knows no violence.

A Christmas-tree farm, on the other hand, turns out to be a roaring nightmare of mutilated spruces, crashing loads, and helicopters buzzing down as if for an assault. That’s how it seems to Will, anyway, when the State of Oregon decides to civilize him, like some late-30s Huck Finn with PTSD. Having captured him and his daughter in Portland’s vast Forest Park, where the two have been living off the land (or is it hiding out?) for an unspecified period of time, the authorities decree that if this family is to remain together, the child must go to school, the parent must earn wages, and both must live in the house that Human Services assigns them, on the farm that jangles Will’s nerves and makes him clutch his head. The confinement, the noise, the officiousness masquerading as kindness: They’re all intolerable to him, with the helicopters as a special torment, uncannily echoing the choppers that shake him out of sleep at night. What’s worst, though, are the hints—given with the tenderness and respect that are the norm between this father and his rapidly maturing daughter—that Tom might like it here.

Co-written with Anne Rosellini, and based on a novel by Peter Rock, Leave No Trace is the third film that Granik has made about a woman in extremity—though not the mortal peril that hovered over Vera Farmiga as a recovering addict in Down to the Bone (2004), or Jennifer Lawrence as an unwilling intruder into criminal secrets in Winter’s Bone (2010). In keeping with its vision of an idyllic almost-Eden, Leave No Trace generates suspense about Tom’s fortunes and signals her moments of defiance almost imperceptibly, with a few words left unspoken or a muttered rejoinder phrased so that her father can take it as acquiescence if he chooses to. Leave No Trace is a quiet movie—or, rather, a muffled one. Tom’s restiveness is always just below the surface, even when she’s offering her habitual “Thank you” to her father (which happens suspiciously often, with perhaps too much meekness) or cheerily complaining that she’s hungry (and so reminding him of her growth). In response, her loving father never raises his voice and never lifts a hand in anger, no matter the terrors that he’s tamping down.

Foster plays Will with a combination of weariness and patience that is striking for this usually explosive actor. With a bushy beard and close-cropped skull, he keeps his powerful torso a little hunched; his close-set, dangerous eyes are often downcast. The man is so contained within himself that you understand why he can’t stand being shut inside a building; and yet he’s also given to issuing peremptory commands to Tom, for reasons that seem more tenuous the deeper you get into the movie. As for McKenzie, her piping voice and slim frame don’t suggest anything like the inner violence that Will fears and fights against. Instead, matching Foster in subtlety, she embodies an innate steadiness (useful for calming bees and rabbits) that underpins Tom’s mounting desire to live outside the forest.

She doesn’t want anything as flimsy as romance (a pursuit unknown in any of Granik’s movies) or as basic as sex, despite the story’s planting of a nice farm boy in her path. If the danger perpetually looming over Tom is the law, the temptation is community. She wants to be free to think her own thoughts (as Will has taught her to say); like other American characters before her, she has approached independence in the green world, and she’s known with her father a love that’s as pure as it gets—and as isolating. Now, though, the road has taken her among people who are willing to extend their hands and ask nothing in return; and, unlike Will, she feels whole enough to accept and reciprocate. That’s the dilemma: to open up a new life for herself in society, or to blow up her father’s old one in the wild.

The choice seems palpable because the characters are, too. You might say that Granik prepared for Leave No Trace by making her remarkable documentary Stray Dog (2014), a portrait of the Vietnam War veteran, trailer-park manager, makeshift paterfamilias, and recreational motorcyclist Ronnie Hall. With Hall, Granik witnessed the gentleness and commitment to mutual support that can be found in the heartland among no-budget people who have learned to distrust authority. She saw how emotional wounds can persist in combat veterans and learned how these men (they were all men) manage to go on even so, through the understanding they receive and the help they give. When Tom enters a community comparable to Hall’s in Leave No Trace, she encounters moments of sweetness and generosity that might have seemed sentimental in the hands of another filmmaker. With Granik, they ring true. She knows practical things, such as the character of the faces to put on the screen and how long she can linger on them, and she’s also learned a few more important matters, such as the firm allegiance that people can bear to their sense of right and wrong.

Leave No Trace lacks the ferocity that drove Granik’s earlier features, as well as a ready hook for audiences; but it offers deeper sorrow and greater hope, as well as a direct line to a substratum of the American imagination. I can think of nothing wrong with it, except for its being Granik’s fourth film in 14 years. By contrast, in the time since her breakthrough in Winter’s Bone, Jennifer Lawrence has found work in 18 pictures, a few of which (when written by David O. Russell) even gave her characters to play. I don’t know exactly what Granik might need by way of financing and support so that she, too, can continue to write characters and elevate her actors (as she’s done again with McKenzie)—but I wish somebody would give it to her, so she can catch up.