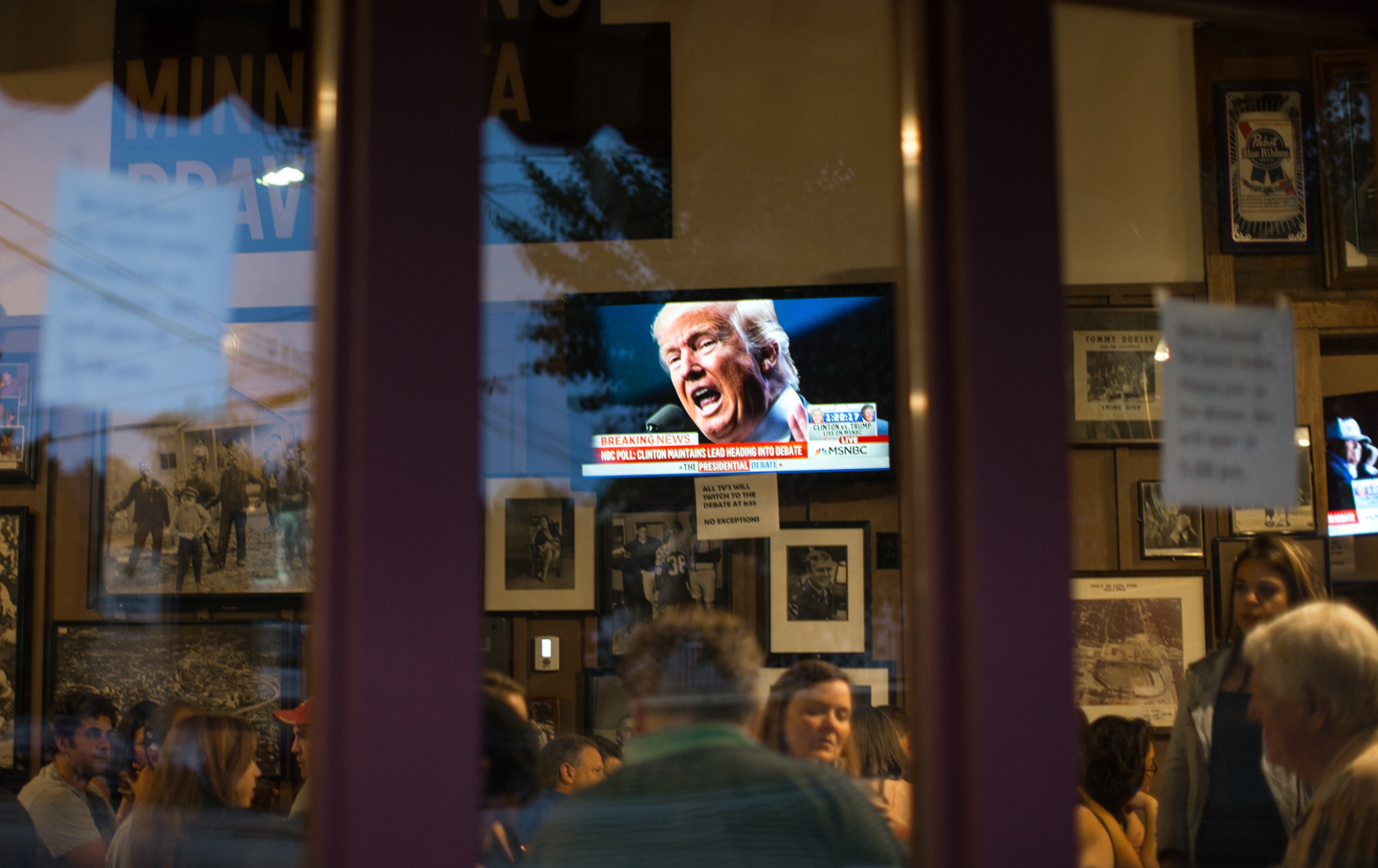 Remember the good old days when the media were certain that after Donald Trump lost the election he’d launch his own television channel? Son-in-law Jared Kushner met with media dealmakers to lay the groundwork, and a small alt-shop called Right Side Broadcasting Network earned the nickname “Trump TV” by producing post-debate analysis on Donald’s Facebook page. There was even excited speculation that Bill O’Reilly and Sean Hannity would bail on Fox News to join their old boss Roger Ailes at an all-Trump-all-the-time, sexual-harassment-friendly workplace.

This new, Breitbart-flavored media empire would, many of us feared, make Trump’s birther campaign to delegitimize President Obama look like a dress rehearsal and Fox look like a poodle. Trump TV would not only hound President Hillary Clinton 24/7, with pitchfork demands for her head, it would operate as a government in exile, in your living room and on your handheld device—menacing, unaccountable, and, most frighteningly, more entertaining than anything the official administration could muster.

Well, never mind. Come the next presidency, Trump TV will, in effect, be on all channels all the time—and Donald “OPM” Trump won’t have to put up a dime. Nearly all news will revolve around Trump, more even than it already does. Syria and immigration, police violence and school vouchers, hate crimes, sex crimes, terrorism, gossip, Social Security—all will reflect aspects of Trump’s brain. His personality will saturate the fabric of the media far more deeply than Obama’s, W’s, or Bubba’s ever did.

Donald Trump’s unique relationship to the media has often been noted. He is both its creature—tabloid cover model, star of The Apprentice, cable news and Twitter addict—and a master media manipulator. But now he’s crossed into something like a Twilight Zone plot: It’s as if television has beamed a 3-D avatar of President Trump into our dimension to rule us in its stead.

He is the culmination of everything that commercial television produces and depends upon: celebrity, a short attention span, enough dramatic conflict to reliably “deliver eyeballs” (yours) to advertisers, and the ad language of puffery. It’s understandable that some Trump voters weren’t bothered by the wild exaggerations and lies; that’s the commercial world we all grew up in. There’s a pleasure in buying—and buying into—things, even hollow crap, even fake news. Whether or not you experience buyer’s remorse when you don’t lose weight or when you, say, lose your Medicare, the pleasure is in the initial surrender—in not having to question, in a fuck-the-facts, fuck-it-all freedom. TV and vast swaths of the Internet tell you again and again, in one way or the other, if you just buy this, your dreams can come true. Without a blush, candidate Trump once told supporters that electing him would “make possible every dream you’ve ever dreamed.”

In 2000, The Simpsons—which for a generation has been explicating Homer’s drooling dictum, “Television! Teacher, mother, secret lover”—predicted a President Trump. The writers figured he’d leave the country so bankrupt that President Lisa would have to trim her liberal agenda. The show also foresaw how TV journalists might adapt to the coming of Trump TV, in the famous Kent Brockman “I, for one, welcome our new insect overlords” clip.

Of course, real TV pros try hard not to be that obvious. Although, times are changing: CNN did hire former Trump operative Corey Lewandowski (post-election, he immediately returned to Trump’s fold); TV networks did hand Trump some $2 billion worth of free media; Joe Scarborough and Mika Brzezinski, who explode at suggestions that they carry water for Trump, do advise Trump off-air “a few times a week,” says Joe; and two dozen TV anchors and execs did agree to an off-the-record meet-and-greet with PEOTUS—only to reportedly face “a fucking firing squad.”

Why would the mainstream media let Trump, essentially, grab them by the pussy? To maintain access (which leads to ratings), to protect their asses from his wrath, to keep their jobs in a dying industry. We could go on.

In fairness, though, the press, like the country, is also authentically overwhelmed by all the norms that Trump is crushing—from refusing to release his taxes and having the kids sit in on meetings with foreign leaders to unleashing chaos with a tweet. Should his attack on the cast of Hamilton be treated as a distraction from his $25 million settlement over Trump University? Are his threats about flag burners deflecting from his many conflicts of interest due to his business interests abroad? As CNN’s Carol Costello and #NeverTrumper radio host Charlie Sykes have recently admitted, they, too, have been barking, “Squirrel!”

Besides, there are interlopers in the kennel that make the whole pack nervous, like that putative “Trump TV” Right Side Broadcasting Network. RSBN recently announced that it will get a seat at White House press briefings, possibly without having to go through the usual accreditation process.

With pressure like that from the new regime, traditional TV news people need to step up, question, and dig like never before. Some, like CNN’s Jake Tapper, Brian Stelter, and Van Jones, are working creatively to navigate this brave new world. But too many pundits still seem stuck in a Trump-induced GIF. SNL caught a whiff of that in a skit that featured one of those overpopulated CNN panels. After each Trump scandal is offered up for comment, the panelists repeat the exact same words with increasing intensity. When host Anderson Cooper, as played by Alex Moffat, begins to notice the repetition, men in Westworld hazmat suits take him away because he’s “skipped out of his loop and is starting to remember.”

As Slate’s Matthew Dessem showed in a really smart spoof of that spoof, when all is Trump TV, we could incrementally forget what we said, what we valued, what words mean. And yet who can forget, besides possibly Lorne Michaels, that a year before the election SNL helped to normalize Trump more than any single Blue Coast tastemaker, by having him host the show, a gift denied Donald’s primary opponents as well as Hillary? The highlight was Larry David ironically calling Trump a racist, thereby inoculating him against charges of racism even as Latino activists outside 30 Rock were protesting exactly that.

Luckily for Trump, TV pundits have been in no danger of starting to remember that the GOP denied the vote to hundreds of thousands, potentially millions, of minority, student, and other Democratic-leaning voters in this election alone—with the closure of some 868 polling places, onerous voter-ID hurdles, and wrongful purging of voting rolls. The press has ably pointed out that voter fraud (illegal voting) is virtually nonexistent, particularly after Trump claimed he would have won the popular vote if “millions of people” hadn’t “voted illegally.” But those same on-air chatterers have apparently been mind-wiped of knowledge about voter suppression. And thus don’t begin to grasp that the fake news about fraud is the cause of the very real suppression. As Ari Berman warns, Trump’s “lies about voter fraud are a prelude” to far worse suppression to come.

No matter how much the liberal media may loathe Trump, no matter how passionately late-night comedians or individual cable hosts may resist him—and they will, and for many of us it will be a lifeline—most every TV news outlet in America will inevitably become part of Trump TV, because it is in their nature to be so.

It’s not only that TV producers will always chase ratings. They are also a bit like Felix in Westworld: Yes, Felix knows Maeve is dangerous; yes, Felix knows he is giving her powers no artificial life form should have, lest it destroy the park and everyone in it. But Felix is going to give Maeve whatever she wants because he is an artist, and he simply has to let this thing he’s helped create run its course. Just to see what it will do.

TV will do the same for Trump. And this game will cut deep.