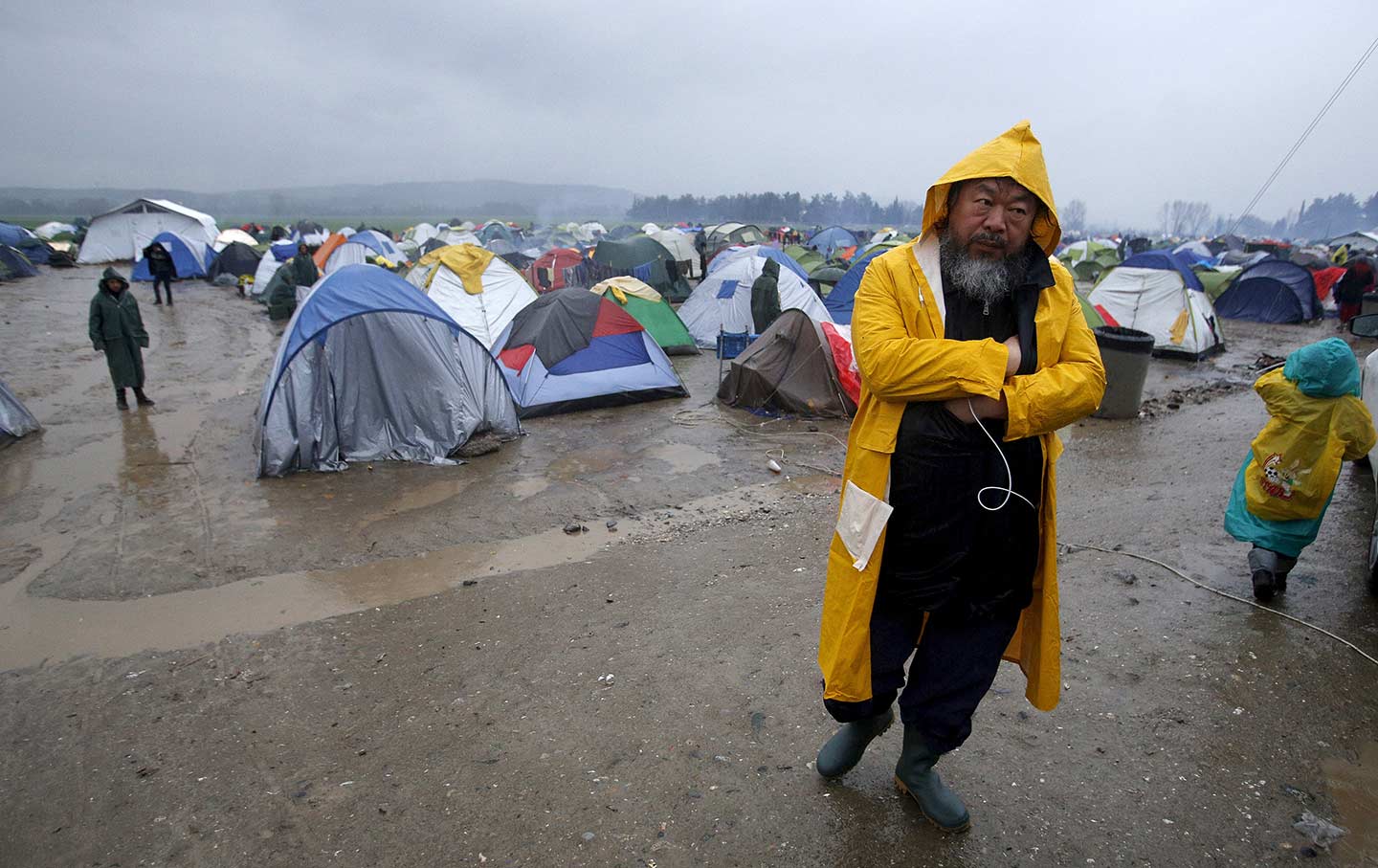 Ai Weiwei looks on as he visits a makeshift refugee camp on the Greek-Macedonian border. (Reuters / Stoyan Nenov)

Ai Weiwei is the most famous political artist in the world and a tireless human-rights activist and critic of the Chinese government. Now he’s made his first feature-length documentary film, Human Flow, about the global refugee crisis. The film opens in New York and Washington on October 13 and Los Angeles October 20, and other cities after that. This interview has been edited and condensed.

Listen to Ai Weiwei on the ‘Start Making Sense’ podcast.

Jon Wiener: In 2011, you were held in prison for 81 days, with two guards standing a few feet away from you 24 hours a day. When you were released, you made a piece about that for the Venice Biennale in 2013, with sharply detailed dioramas of you in your cell. After you were released, you weren’t allowed to travel for four years. In your new film, Human Flow, we see you on the beach on the island of Lesbos, where boatloads of desperate refugees are landing. You are wading into the water, and pulling refugees out of the ocean with one hand, while with the other you are shooting video with your iPhone. How did you get from that tiny cell in Beijing to that beach on the island of Lesbos?

Ai Weiwei: When I was in this detention, until the last moment, the last day, they were still talking to me about how I’m going to be sentenced to 10 years. And then suddenly that evening I got released. Then, after many years of house arrest, they just handed back my passport, and said you’re now ready to travel. I moved to Berlin, because a university gave me a professorship there. So I teach there and also I have a studio there. But at that time I’m never thinking to make a film. Until I come to Lesbos, on the shore.

JW: When you were imprisoned, you were confined in a tiny space with two guards watching you every minute. What Human Flow shows is sort of the opposite. You were not allowed to leave, but millions of people had to leave their homes. You were watched every minute, but nobody is looking at them. Human Flow seems to portray the opposite of your own experience—but maybe not. 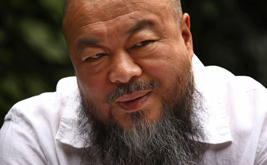 Ai Weiwei and the Art of Protest

AiWw: It seems opposite, but it’s quite close. People have been forced into a state of movement, but stillness is one condition of movement.

JW: You have said that you think of yourself as a refugee, like those people coming ashore on Lesbos.

AiWw: Yes. If I look at my history, my father was exiled when I was a boy, our family being sent to the most remote area in northwest of China. The border area. As far as possible. I grew up in a condition of humiliation and discrimination. My father was named an enemy of the people and the party, badly criticized and put into hard labor, and I grew up in that kind of condition. We were internally displaced, and faced a lot of discrimination.

JW: In Human Flow you’ve used the camera on drones to show, literally, the flow of thousands of people. Drones, of course, make the people look very, very tiny. What do you think about the drone camera?

AiWw: Drones are fascinating—offer a point of view which is not the human point of view. It’s from either a bird, or from God. Looking at a human this way can be so indifferent. And it puts the human flow as some part of the nature—it’s like water flowing, or ice melting. I like that kind of metaphor, because we very often talk about how different and how foreign those people are. But from a certain point of view, you cannot distinguish who’s who. It’s all the same. It’s humanity, it’s not anything else. It’s about a human problem. So drones are very, very attractive. They can offer this kind of possibility. But at the same time, you have to have a clear content to direct those drones. You don’t want to show just technical superiority, a slickness of this kind of image.

JW: And of course Human Flow has the more familiar kind of one-on-one shots, conversations with individuals, and you are present on screen with people. In one camp you get your hair cut, in another camp you cut someone else’s hair. In one, you grill kabobs. In another, the woman you are setting up to interview gets so scared and upset that she throws up, and you hold the bucket for her. That one really got to me. How did you decide how much of you should be in the film? And how did you decide how you wanted to present yourself in the film?

AiWw: In the beginning I have no intention to show myself. Until the last moment of editing, I and the editor decided it is very important to have my involvement—for two reasons. One is we offer this very large scale interpretation of Human Flow, but at the same time we are trying to see this from one person’s journey. It needed someone to introduce this. And another reason: Many, many people would watch the film because of my involvement, because I’m very lively working in social media. I think it’s good for young people to see how to get involved. And people will not say, “Oh it’s not possible, it’s too large.” Yes, it’s very large, but still everything can come from one person’s understanding, or his own feeling, or his own effort.

JW: I worried before I saw the film that all the suffering would be too hard to take. Especially in a two-hour-and-20-minute documentary. And there are some scenes that are almost unbearable. For me, it was that man at the freshly dug graves in a rough cemetery. He shows you the ID cards of his family members whom they are burying, and there are five of them. I’m sure that lots of terrible things happened in front of you, more terrible than that. But you had to decide: What do you show, and what do you turn your eyes from? You want us to look, but maybe not at everything.

AiWw: Yes, in the beginning we have to decide what kind of film we are making. We decided we have to take beautiful shots as much as possible, and still shots of people. We wanted to give viewers more space to gaze and to think about the situation. And we talk about humanity rather than shocking images. All the people have the same story. Nobody, no one of them are choosing to leave their home and take this very dangerous journey, and the journey seems very dark and would have no end.

JW: In Human Flow we see refugees crowded into boats, we see refugees marching through rain and mud, blinded by sandstorms, trapped in camps. We see people who are frightened and suffering and miserable. But also—

AiWw: Also the determination to choose their own fate, and the courage to challenge their misfortune. To start again, from zero. This kind of story we hear for generations–people who have to give up everything and go to another location. This is a moment to really challenge what kind of humanity we have today, how we look at those refugees: Are they part of us? Are we willing to recognize we are part of the problem?