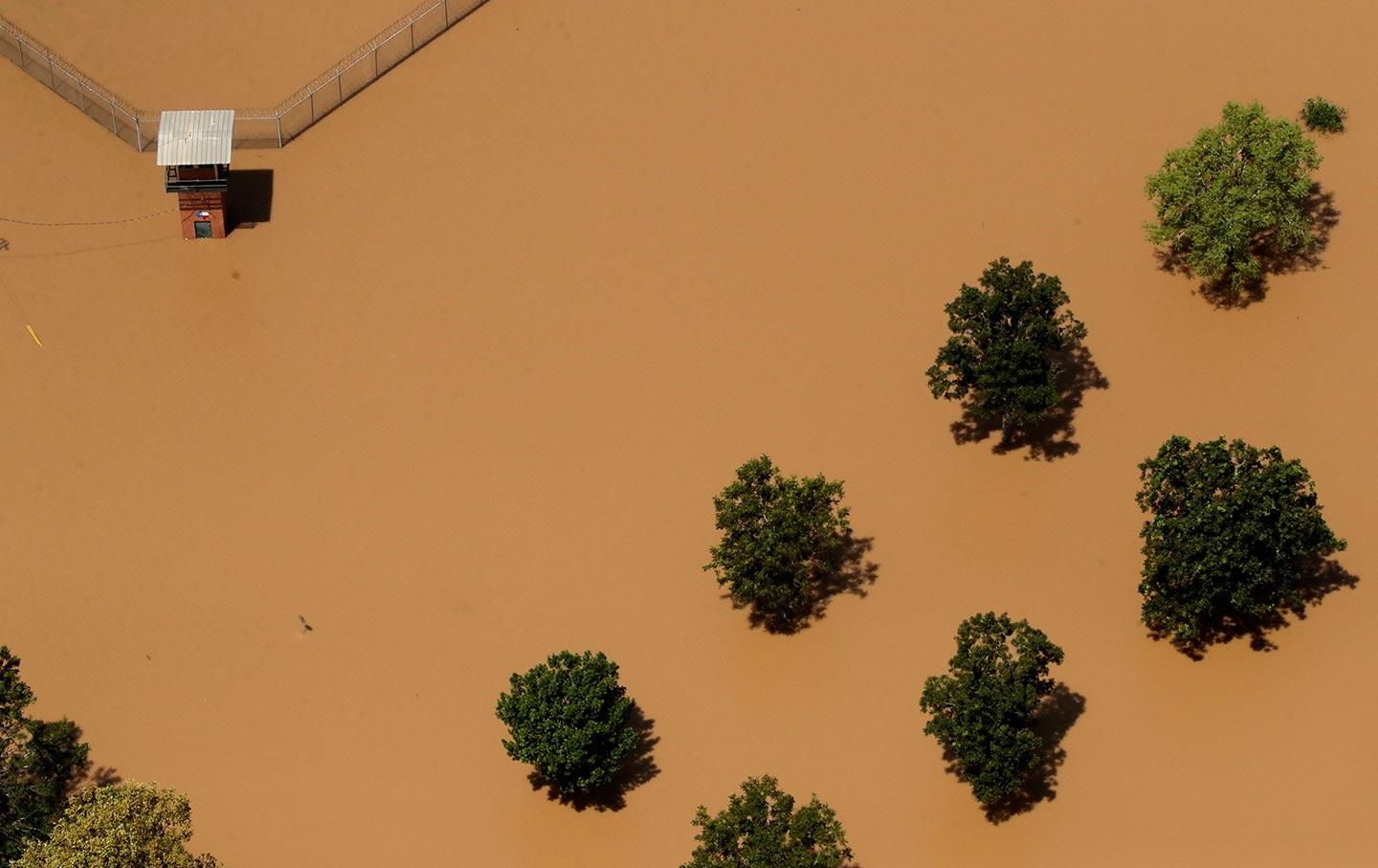 The guard tower at an evacuated Texas State prison unit in Rosharon, Texas, is submerged by water from the flooded Brazos River in the aftermath of Hurricane Harvey, September 1, 2017. (AP Photo / Charlie Riedel)

During and after Hurricane Harvey’s slow and catastrophic crawl over the Gulf states at the end of August, inmates in multiple prisons in Texas were left to suffer in horrifying, inhumane conditions in ravaged facilities across the state, according to nearly 100 inmate accounts obtained by the National Lawyers Guild.

The accounts collected by the NLG report power outages and insufficient access to food, water, and medicine. Inmates described cells flooded knee-high with water contaminated by urine and feces, as well as the inability to flush toilets, take showers, or change clothes for two weeks. The United States Penitentiary, Beaumont, operated by the Federal Bureau of Prisons, was inaccessible to visitors for up to a month after the hurricane. In the Texas prisons affected by the storm, officials have either declined to comment on conditions or denied all inmate claims about the conditions.

As the wettest storm on record in US history bore down in the last days of August—dropping five feet of rain in some areas—completely inundating Houston, killing more than 70 people, and damaging almost 200,000 homes, at least five prisons on the east coast of Texas were evacuated. The logistically intricate process involved moving around 6,000 inmates, including transferring approximately 600 inmates into beds in the Wallace Pack Unit—a facility that had been emptied only weeks earlier after a judge called the conditions at the unit unconstitutionally hot. The Texas prison population, one of the largest of any state, counting inmates in both state and federal custody (not including Immigration and Customs Enforcement detainees), is around 160,000 inmates. But while five prisons were evacuated, Texas Department of Criminal Justice (TDCJ) decided not to evacuate the Gist, Leblanc, and Stiles units, and the BOP opted not to evacuate their Beaumont facility. There are over 8,000 combined inmates in those four prisons.

After news of inmates stranded inside the prisons began to leak out, the Prison Legal Advocacy Network of the National Lawyers Guild (NLG), filed notices to both TDCJ and the BOP, noting the “persistently unconstitutional conditions of confinement.” The notice to the BOP claims the agency had “adequate foreknowledge of the flood risk” and “ample notice of the widespread concerns” about constitutional rights violations during previous hurricanes, and yet, according to allegations, the BOP did not sufficiently warn the inmates about the coming hurricane, evacuate them, or provide them with needed food, water, or access to medical care or bathrooms. 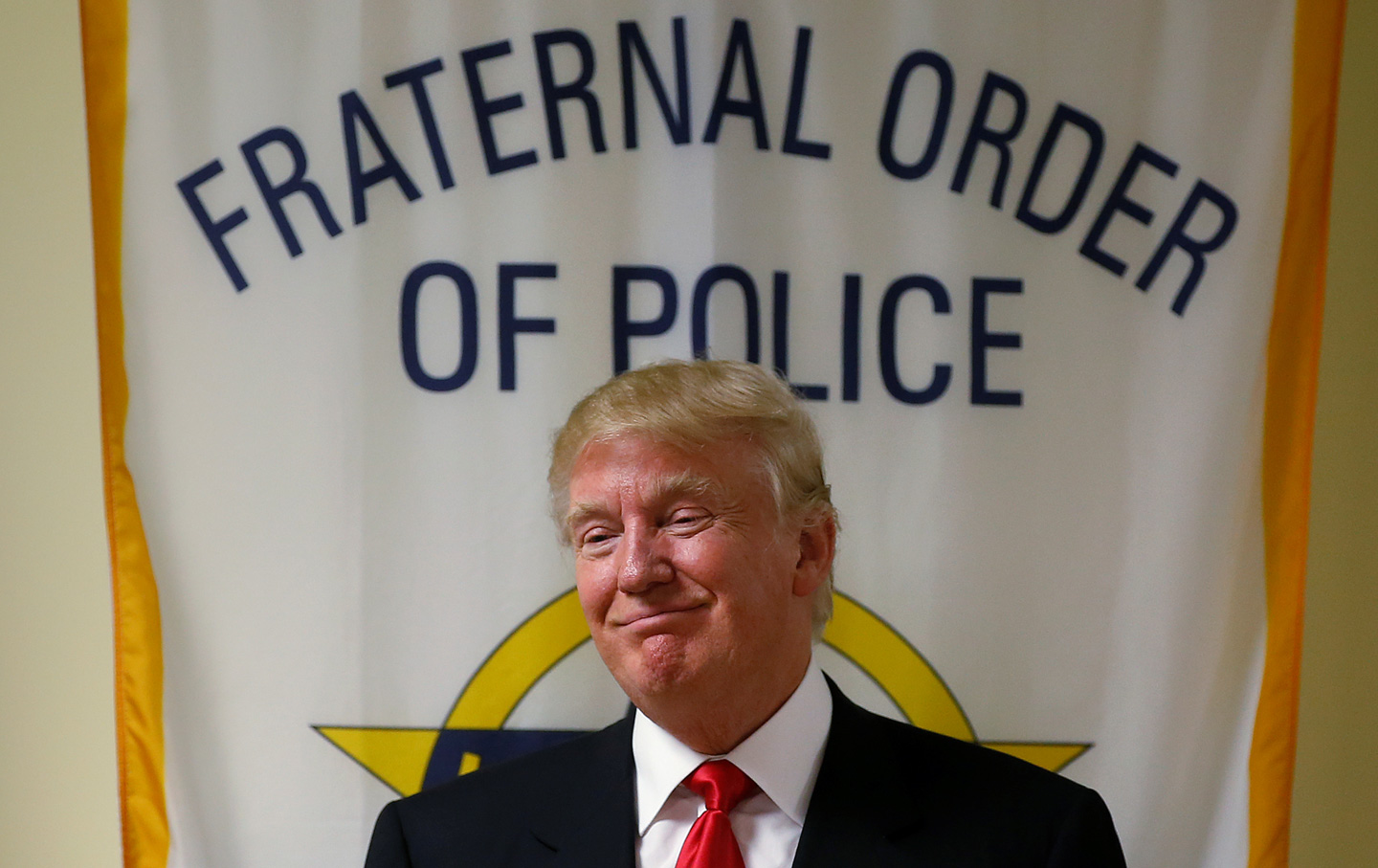 The Fraternal Order of Police Must Go

I obtained access to a September 5 letter (the hurricane made its second landfall near Beaumont on August 30), written by an inmate in the Special Housing Unit of USP Beaumont to his mother. The mother, fearing retaliation against her son, requested anonymity. He described how inmates in his unit were only allowed to flush their toilets once a day. “In the heat with the poor ventilation the smell is horrible there are guys pooping in bags but sometimes they don’t pick up the trash,” he wrote. Inmates were not given sufficient water—only two bottles a day—and the writer complained of ninety-plus degree temperatures, cockroaches, creeping mold, and headaches from dehydration. He described the food as rotten and insufficient. “I have a rash from my hands to my shoulders on both arms and my sides,” he wrote. The skin on his face was “bright red and peeling.”

In an August 31 memo from Dallas B. Jones, the warden of USP Beaumont, to the inmates, Jones described the situation they were put in when water service from the city had been suspended. “We understand that the situation is less than desirable,” the warden wrote. Besides the September 5 letter from the inmate to his mother decrying the lack of water, other inmates writing to the NLG described “low water rations and living in our own defication [sic]” or “i felt i was going to die because the water was not enough.”

And yet, at least some water should have been running to USP Beaumont as of September 1. I spoke with the emergency-management specialist for the City of Beaumont, who told me that beginning on September 1, there was limited water supply flowing through the pipes, and that water (though there was a boil notice on it) was available to the prison. BOP officials did not return repeated requests to explain the discrepancy.

The situation in the three unevacuated TDCJ units, according to dozens of inmates, was just as bad. Water in some cells was knee-high, and toilets were overflowing with feces and urine. Inmates described suffering from heat, dehydration, hunger, mold, and being unable to communicate with anxious family members on the outside.

I spoke with Lindsey Disheroon, whose husband, Clifton Cloer, is an inmate in the Stiles Unit. According to Cloer, his pod was wet for 12 days, during which he was given insufficient water, hardly any food (kids-size bowls of cereal in the morning, no lunch, and cold chicken patties without bread for dinner), and no access to the portable toilets that TDCJ brought in—those toilets, according to multiple testimonies, were made available only to the staff. Meanwhile, as in USP Beaumont, with the toilets not flushing, feces and urine had started to spill over toilet bowls and pool into the common area. Inmates did not have access to showers or a change of clothes for 10 days, according to Cloer and others.

TDCJ disputes all of these claims. Director of Public Information Office Jason Clark told me via e-mail that Stiles did not flood, and the inmates in all three TDCJ units were given sufficient water, food, and access to toilets. But at least a few of TDCJ’s other claims seem suspect: TDCJ posted to Facebook a series of photographs and videos of staff handing food and water to inmates in a dry prison yard, but inmate family members and NLG assert that some of the employees pictured were no longer working at those units, and allege that TDCJ must have recycled the photographs from a previous event. Stanley Holdorf, an NLG attorney, told me, “There are a sufficiently large number of discrepancies and inconsistencies to raise credible concerns about the veracity of TDCJ claims that these photos and video were, in fact, shot on a single day in hurricane-affected units post-Harvey.”

Attorney Pam Starsia, working with the NLG, pointed out the gross inconsistencies between TDCJ and BOP’s public statements and the almost 100 testimonies they received from inmates and inmate family members. The “complete refusal [by prison officials] to acknowledge that something needs to be changed is really, really scary,” Starsia said. “We know these storms are going to become more and more frequent. If the plan is that every time there is a severe weather event people just don’t get food and water for a few weeks, and live in cages with their own excrement, that’s not an okay plan.”

This wasn’t the first time that inmates in Texas prisons suffered after their units were not evacuated before or during a Hurricane. After 2005’s Hurricane Rita, one of the most intense Atlantic storms ever recorded, 453 inmates in USP Beaumont filed suit, alleging negligence on behalf of prison officials. Inmates were left without electricity (there was no power in the prison for over a month) or drinking water. For the first three days, inmates remained locked in their cells and were given no food and only brown water to drink. Severe black mold, over 100 degree temperatures, and lack of sanitation (no showers for two weeks) caused bacterial infections and skin rashes. The case was eventually dismissed on a technicality. In 2008, after Hurricane Ike, over 130 inmates in the Leblanc unit, which was not evacuated for that storm, filed lawsuits claiming their “deplorable conditions”—which included no clean water, no electricity, and not being able to shower—violated their Eighth Amendment protections against cruel and unusual punishment. These lawsuits were also dismissed. None of the inmates in the Leblanc case were represented by attorneys. Starsia, the NLG attorney, told me that if they had been afforded counsel, it is highly likely they would not have been dismissed.

From an October 2 e-mail I received from Leon William Carter, an inmate in USP Beaumont describing the conditions he was left in after Hurricane Harvey:

I need to know what I can do about being subjected to weeks of unsanitary conditions. 14 days or more of Fecal matter filled toilets, over flowing urinals. Black mold growing agressively on the bathroom walls and no way to clean myself/body from weeks of built up dirt and grime from being locked inside a over crowded unit (160 plus inmates to 64 cubicles) with no ventilation. All the windows are locked down with screws and no way to open them. Watching inmates pass out from the heat and lack of nutrients. Being given 2 to 3 bottles of water [a day, until] it was raised to 5 because the number of inmates going into dehydration.… Waking up sweating in fear that I may die at any moment as inmates scream in delirium through the night. Being scared for my life as Officers lose their tempers and lash out for being given job assignments that they did not volunteer for. I need to know what you can do about the Capt. [Redacted] telling me to lie to my families about the conditions I was being forced to live in telling me “to be a man.” What can i do about Lt. [Redacted] telling me that “he doesn’t give a damn about what we are going through etc.…” What can be done about the psychological effects i am still facing daily from thinking my 76 yr old cellmate was going to die in the cell with me. Can you help me with the retaliation I and my family as well have to deal with for having the news articles and our names associated with it in the paper, the Complex Capt. [Redacted] to take my phone and email if i didn’t stop sending out emails about my conditions, having my Counselor not pay me my monthly wages to show me how helpless I am.

Despite concerns for retaliation, Carter made clear to me that he wanted his e-mail, with his name, to be published. “My wife and i have already faced a lot of retalitory actions from the guards of this institution,” he wrote to me, “so it is not a secret to what i am going through or facing.”

BOP officials did not respond to repeated request for comment for this article. When I asked TDCJ officials if the agency had modified its emergency protocols to better maintain inmate safety, I received a one-word response: “No.”

I recently spoke with Leon William Carter’s wife, who told me that he had gone to see the prison psychologist. The reason: It had been raining again in Texas, and Carter was nervous.