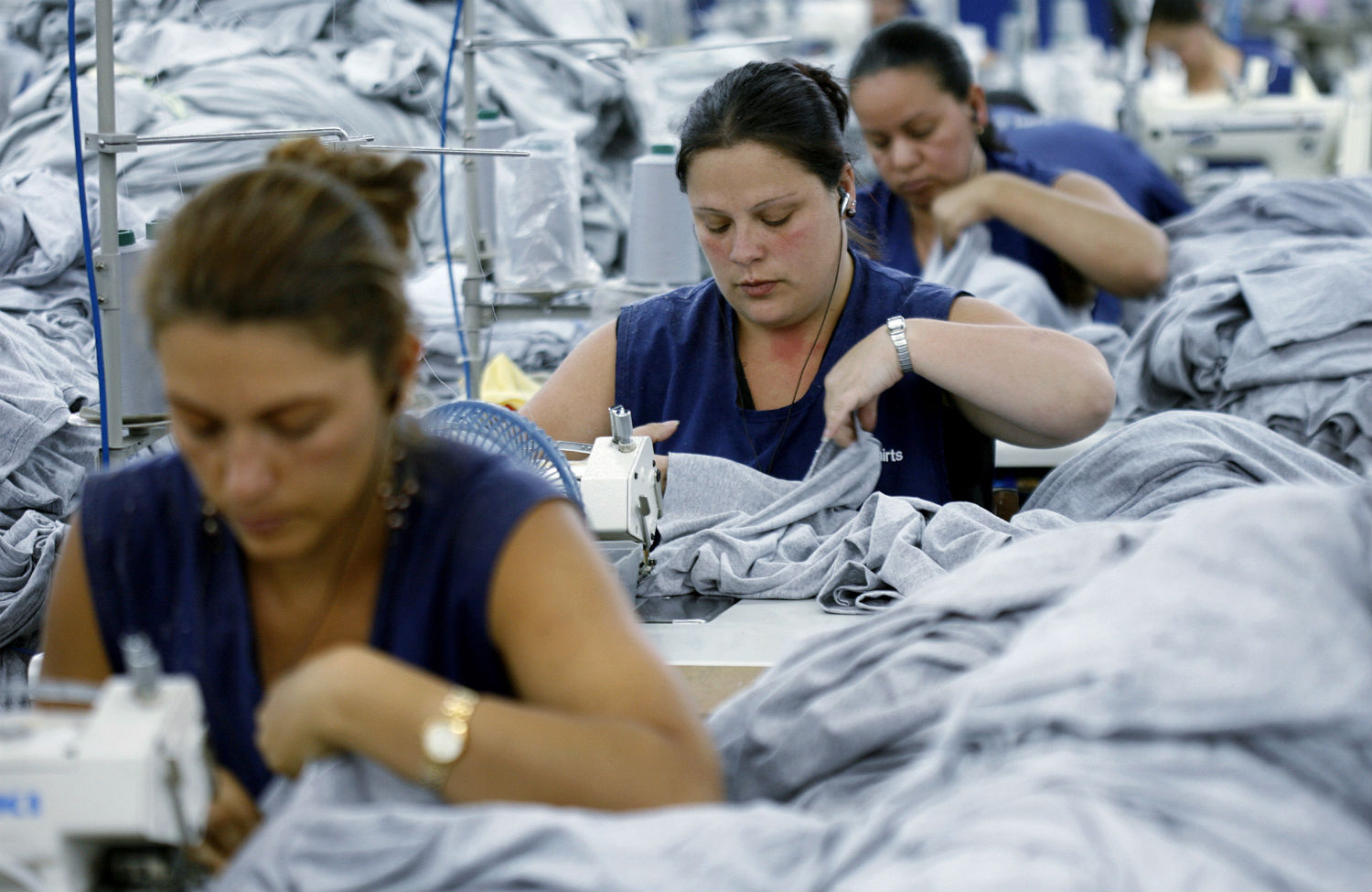 With Republicans winning big in the midterm elections, the debate over so-called “free trade” agreements could again take center stage in Washington.

President Barack Obama has been angling for “fast track” authority that would enable him to push the proposed Trans-Pacific Partnership, or TPP—a massive trade agreement between the United States and a host of Pacific Rim countries—through Congress with limited debate and no opportunity for amendments.

From the outset, the politicians who support the agreement have overplayed its benefits and underplayed its costs. They seldom note, for example, that the pact would allow corporations to sue governments whose regulations threaten their profits in cases brought before secretive and unaccountable foreign tribunals.

So let’s look closely at the real impact that trade agreements have on people and the environment.

A prime example is the Dominican Republic-Central America Free Trade Agreement, or DR-CAFTA. Brokered by the George W. Bush administration and a handful of hemispheric allies, the pact has had a devastating effect on poverty, dislocation and environmental contamination in the region.

And perhaps even worse, it’s diminished the ability of Central American countries to protect their citizens from corporate abuse.

In 2004 and 2005, hundreds of thousands of protesters filled Central America’s streets.

They warned of the unemployment, poverty, hunger, pollution, diminished national sovereignty and other problems that could result if DR-CAFTA were approved. But despite popular pressure, the agreement was ratified in seven countries—including Guatemala, Nicaragua, El Salvador, Honduras, Costa Rica, the Dominican Republic and the United States.

Ten years after the approval of DR-CAFTA, we are seeing many of the effects they cautioned about.

Overall economic indicators in the region have been poor, with some governments unable to provide basic services to their population. Farmers have been displaced when they can’t compete with grain imported from the United States. Amid significant levels of unemployment, labor abuses continue. Workers in export-assembly plants often suffer poor working conditions and low wages. And natural-resource extraction has proceeded with few protections for the environment.

Contrary to the promises of US officials—who claimed the agreement would improve Central American economies and thereby reduce undocumented immigration—large numbers of Central Americans have migrated to the United States, as dramatized most recently by the influx of children from Guatemala, El Salvador and Honduras crossing the US-Mexican border last summer. Although most are fleeing violence in their countries, there are important economic roots to the migration—many of which are related to DR-CAFTA.

One of the most pernicious features of the agreement is a provision called the Investor-State Dispute Settlement mechanism. This allows private corporations to sue governments over alleged violations of a long list of so-called “investor protections.”

The most controversial cases have involved public interest laws and regulations that corporations claim reduce the value of their investments. That means corporations can sue those countries for profits they say they would have made had those regulations not been put into effect.

Such lawsuits can be financially devastating to poor countries that already struggle to provide basic services to their people, much less engage in costly court battles with multinational firms. They can also prevent governments from making democratically accountable decisions in the first place, pushing them to prioritize the interests of transnational corporations over the needs of their citizens.

These perverse incentives have led to environmental deregulation and increased protections for companies, which have contributed to a boom in the toxic mining industry—with gold at the forefront. A stunning 14 percent of Central American territory is now authorized for mining. According to the Center of Research on Trade and Investment, a Salvadoran NGO, that number approaches 30 percent in Honduras and Nicaragua—and rises to a whopping 35 percent in Honduras.

In contrast to their Central American neighbors, El Salvador and Costa Rica have imposed regulations to defend their environments from destructive mining practices. Community pressure to protect the scarce watersheds of El Salvador—which are deeply vulnerable to toxic mining runoff—has so far prevented companies from successfully extracting minerals like gold on a large scale, and the Salvadoran government has put a moratorium on mining. In Costa Rica, after a long campaign of awareness and national mobilization, the legislature voted unanimously in 2010 to prohibit open-pit mining and ban the use of cyanide and mercury in mining activities.

Yet both countries are being punished for heeding their citizens’ demands. Several US and Canadian companies have been using DR-CAFTA’s investor-state provisions to sue these governments directly. Such disputes are arbitrated by secret tribunals like the International Center for the Settlement of Investment Disputes, which is hosted by the World Bank and is not accountable to any democratic body.

In 2009, the US-based Commerce Group sued El Salvador for closing a highly polluting mine. The case was dismissed in 2011 for lack of jurisdiction, but El Salvador still had to pay several million dollars in fees for its defense. In a case still in process, the gold-mining conglomerate Pacific Rim has also sued El Salvador under DR-CAFTA for its anti-mining regulations. To get around the fact that the Canadian company wasn’t from a signatory country to DR-CAFTA, it moved its subsidiary from the Cayman Islands to Reno, Nevada, in a bid to use the agreement’s provisions. Although that trick failed, the suit has moved forward under an outdated investment law of El Salvador.

Elsewhere, Infinito Gold has used DR-CAFTA to sue Costa Rica for nearly $100 million over disputes related to gold mining. And the US-based Corona Materials has filed a notice of intent to sue the Dominican Republic, also claiming violations of DR-CAFTA. These costly legal cases can have devastating effects on the national economies of these small countries.

Of course, investor-state disputes under DR-CAFTA are not only related to mining. For example, TECO Guatemala Holdings, a US corporation, alleged in 2009 that Guatemala had wrongfully interfered with its indirect subsidiary’s investment in an electricity distribution company. Specifically, TECO charged that the government had not protected its right to a “minimum standard of treatment”— an exceptionally vague standard that is open to wide interpretation by the international tribunals that rule on such cases—concerning the setting of rates by government regulators. In other words, TECO wanted to charge higher electricity rates to Guatemalan users than those the state deemed fair. Guatemala had to pay $21.1 million in compensatory damages and $7.5 million in legal fees, above and beyond what it spent on its own defense.

The US-based Railroad Development Corporation also sued Guatemala, leading to the country paying out an additional $11.3 million, as well as covering both its own legal fees and the company’s. Elsewhere, Spence International Investments and other companies sued Costa Rica for its decision to expropriate land for a public ecological park.

What’s at stake here is not only the cost of lawsuits or the impact of environmental destruction, but also the ability of a country to make sovereign decisions and advance the public good.

Investment rules that allow companies to circumvent national judicial systems and challenge responsible public policies can create an effect that’s been dubbed “regulatory chill.” This means that countries that might otherwise have curtailed corporate activity won’t—because they’re afraid of being sued.

Guatemala is a prime case. It’s had to pay companies tens of millions of dollars in investor-state lawsuits, especially in the utility and transportation industries. But it hasn’t yet been sued by a mining company. That’s because the Guatemalan government hasn’t limited the companies’ operations or tampered with their profit-making.

In internal documents obtained by activists, the Guatemalan government cited potential investment arbitration as a reason to avoid suspending the mine, writing that closing the project could provoke the mine’s owners “to activate the World Bank’s [investment court] or to invocate the clauses of the free trade agreement to have access to international arbitration and subsequent claim of damages to the state.” As this example demonstrates, just knowing that a company could sue can prevent a country from standing up for human rights and environmental protection.

More recently in Guatemala, the communities around San Jose del Golfo—about 45,000 people—have engaged in two years of peaceful resistance to prevent the US-based Kappes, Cassiday, and Associates from constructing a new mine. Protesters estimate that 95 percent of families in the region depend on agriculture, an industry that would be virtually destroyed if the water were to be further contaminated. But the company threatened to sue Guatemala if the mine was not opened. “They can’t afford this lawsuit,” a company representative said. “We had a big law group out of [Washington] DC fire off a letter to the mines minister, copied to the president, explaining what we were doing.”

On May 23, the people of San Jose del Golfo were violently evicted from their lands by military force, pitting the government in league with the company against its own people—potentially all to avoid a costly lawsuit.

A Prelude to the TPP

Warnings about the crises that “free trade” would bring to Central Americans were, unfortunately, correct. Central America is facing a humanitarian crisis that has incited millions to migrate as refugees from violence and poverty, thousands of them children. One push factor is the environmental degradation provoked by ruthless mining corporations that are displacing people from their rural livelihoods.

And it’s not just DR-CAFTA. The many investor-state cases brought under the North American Free Trade Agreement (NAFTA), and in countries all over the world, have exposed the perniciousness of investor protection rules shoehorned into so-called “free trade” pacts. Many governments are realizing that these agreements have tied their hands when it comes to protecting their own environments and citizens.

We must use these egregious investor-state cases to highlight extreme corporate power in the region. We must work to help Central Americans regain livelihoods lost to ruthless extractive projects like mining. And we must change trade and investment agreements to stop these excessive lawsuits that devastate communities, the environment and democracy itself.

Like DR-CAFTA, the proposed Trans-Pacific Partnership includes investor-state provisions that are likely to hurt poor communities and undermine environmental protections. Instead of being “fast tracked” through Congress, future trade agreements like the TPP—and the Transatlantic Trade and Investment Partnership being negotiated between the European Union and the United States—must be subject to a full debate with public input.

And such agreements must not, at any cost, include investor-state mechanisms. Because trading away democracy to transnational corporations is not such a “free trade” after all.

NFL Player Justin Jackson: ‘40 Years of Neoliberalism Has Brought Our Country to the Brink’