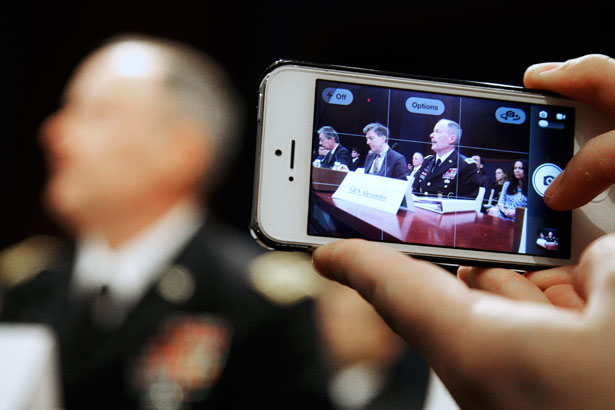 A reporter takes a smartphone picture of NSA Director Keith Alexander at a House hearing on surveillance programs, in Washington, June 18, 2013. (Reuters/Jonathan Ernst)

For a few hours on Tuesday, the Islamic State looked like the best thing that ever happened to the National Security Agency. The USA Freedom Act, a modest bill seen as the best chance for reforming one of the NSA’s dragnet surveillance programs, failed to clear a procedural hurdle in the Senate by two votes after Republicans insisted that it would precipitate a terrorist attack.

“This is the worst possible time to be tying our hands behind our back,” Mitch McConnell said. “We live in a dangerous world, and the threat by ISIL only makes it more so.” Marco Rubio chimed in with his own warning: “God forbid that tomorrow we wake up to the news that a member of ISIL is in the United States,” he said. Former CIA director Michael Hayden penned a Wall Street Journal op-ed under the headline, “NSA Reform That Only ISIS Could Love.”

Really, the USA Freedom Act was NSA reform that no one really loved, except maybe the Obama administration. The bill had “strong support” from the White House and the intelligence agencies, from most of the reform-minded lawmakers and from the tech companies and many civil-liberties groups. And it did contain several provisions lauded by privacy advocates, such as placing special advocates on the secret court that authorizes surveillance requests to argue against the government, and forbidding the government itself from holding phone records.

But groups like the American Civil Liberties Union and the Electronic Frontier Foundation, which deemed the legislation an “important step forward,” were also clear that it addressed only a very small part of the government’s dragnet surveillance activities. Others thought the bill was so imprecise that it might have sanctioned, rather than ended, certain surveillance practices. Libertarian NSA critic Rand Paul objected because it didn’t go far enough—though before giving him too much credit for his principled stand note that he could have voted to move the bill forward and then offered amendments to address his concerns before a final vote. Ultimately, as Glenn Greenwald wrote at The Intercept, “There is a real question about whether the defeat of this bill is good, bad, or irrelevant.”

In any case, that particular doorway to reform is closed for now. So what’s next? The next opportunity for lawmakers to curb the intelligence agencies will come in mid-2015, when the section of the Patriot Act that the government leans on for legal justification of the phone records program is set to expire. NSA critics and supporters alike have warned that failing to pass the USA Freedom Act would mean that the administration “will end up getting nothing” in the reauthorization fight, as Patriot Act author James Sensenbrenner warned earlier this year. Even some supporters of the USA Freedom Act like Dianne Feinstein will fight tooth and nail to keep the provision from expiring completely, and the threat of expiration means privacy advocates will have at least some leverage to limit its authority. Some parts of the USA Freedom Act, like installing special advocates on the Foreign Intelligence Surveillance Court, cannot be addressed in the reauthorization process however. Nor can other authorities that the government uses to spy, like Section 702 of the Foreign Intelligence Surveillance Amendments Act and Executive Order 12333.

The Senate’s failure to bring even a narrow, watered-down reform to a final vote underscores that Congress is for the most part disinterested and/or incapable in exercising its constitutional duty to oversee the intelligence community. (There are individual exceptions, of course; for example Colorado Senator Mark Udall could front an immediate challenge to the CIA over its use of torture, as John Nichols explains.) Things aren’t going to get any better next year: the Republicans likely to chair the House and Senate intelligence committees, Devin Nunes and Richard Burr, are both hostile to reform. Nevertheless, privacy advocates vowed to continue to press for changes, and not only to the phone-records program.

Off the Hill, the government’s surveillance tactics are being confronted in a number of ways. Fearful for their bottom line, tech companies are taking a serious interest in encryption, and foreign governments are searching for ways to circumvent the United States when it comes to the Internet. Multiple challenges to the telephone-records dragnet are pending in federal courts. One judge, who called the NSA’s activities “almost Orwellian,” has already ruled that bulk collection likely violates the Fourth Amendment. But whether the pending cases will lead to meaningful constraints on the NSA isn’t clear. Greenwald, for one, has as little faith in the judiciary as he has in Congress, writing that it’s the institution “most consistently subservient to the National Security State” in the post-9/11 era. But absent the emergence of a spine in Congress with regards to the incessant fearmongering that serves as a shield for government spying, a patchwork of court rulings and the power of consumer choice looks increasingly like the only viable defense.