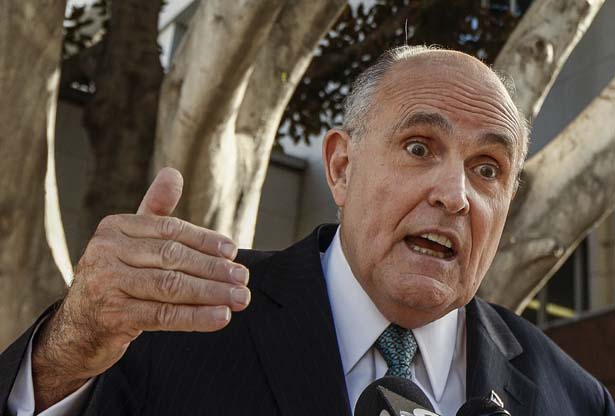 For much of the right-wing media it was payday. Two New York City cops were murdered by a troubled gunman who had allegedly suggested on social media that he’d kill cops to avenge the deaths of unarmed blacks by police—and that was all some of the rightward press needed to finally justify attacking Mayor Bill de Blasio and the entire #BlackLivesMatter movement without restraint.

For the New York Post in particular this has been a moment of sweet revenge. During the 2013 mayoral campaign, the Post continually red-baited the left-leaning de Blasio, warning that his opposition to police stop-and-frisk practices would plunge the city’s crime rates back to those of the 1970s (so far, it looks like the city’s become safer). But the Post failed to stir the required hysteria and de Blasio won election handily. But now, with PBA president Pat Lynch accusing both anti–police-brutality protesters and the mayor of having "blood on the hands,” and with police turning their backs on de Blasio when he entered a Brooklyn hospital to pay his respects to the slain officers, Rafael Ramos and Wenjian Liu, the Post can seem—if you’re not looking closely—to be vindicated.

It’s running cover headlines like “Shamed mayor begs New Yorkers to save cops,” and letting ridiculous invective run loose. “Like most radicals with no real-world experience,” columnist Michael Goodwin wrote of de Blasio, “he assumes the way to fix things is to first smash them into pieces. That’s what he’s doing to New York.” No real-life experience? Smash NYC to pieces? Whatever he’s talking about, it doesn’t matter. The details get swept up by the fury.

The national media smell blood, too, and that’s encouraging them to take bolder moves than usual. Bill O’Reilly interrupted his vacation to call into The O’Reilly Factor and demand that de Blasio resign. Joe Scarborough, who had been railing for weeks against the protesters, the Rams players who supported them, and anyone who chanted “Hands up, don’t shoot” did something Monday he almost never does: he made a direct-to-camera speech; it amounted to an I-told-you-so that “these assassinations were too predictable.”

And of course the usual suspects are all over Fox: former mayor Rudy Giuliani keeps insisting that the largely peaceful (exceptions below) protests that de Blasio rightly allowed wouldn’t have occurred on “my streets” (as if the streets didn’t belong to the public). Former NYPD detective and Fox contributor Bo Dietl has been shouting nonstop about “comrade” de Blasio” and advising him to “take his wife…and go back to Cuba and live there.” (De Blasio and Chirlane McCray’s honeymooned in Cuba in 1994.) Former New York City Police commissioner Bernard Kerik joined in the bloody-hands demands that de Blasio resign. “I personally feel that Mayor de Blasio, Sharpton and others like them, they actually have blood on their hands.” (Fox doesn’t mention it, but Kerik had to resign from the Giuliani administration and was sentenced to four years in prison after pleading guilty to eight felony charges in 2010.)

The resignation meme is no longer confined to Fox. CNN’s Wolf Blitzer asked a guest last night whether de Blasio should leave office. (The answer was “yes.”) As long as people, even if it’s mostly media people like O’Reilly, are putting it out there, it’s a legit question, but you rarely hear a cogent argument for just why he should resign. For losing the respect of some of the police? (For all we know now, most may actually support de Blasio.) For allowing the protests to take place? (De Blasio called for them to cease until after the funerals of the two slain officers, a plea many protesters have ignored.) For even sympathizing with the protesters?

The anger is such that de Blasio’s foes are begrudging a black kid from getting the sound and classic advice to be careful about how he acts around police, advice de Blasio said he’s given to his 17-year-old biracial son, Dante. Former NYPD commissioner Ray Kelly has been all over TV denouncing de Blasio’s public statement as a terrible breach. The right is acting as though the murders of the two police officers nullify every problem with every police force in the US. Suddenly, it's dicey to question law enforcement.

This is a far cry from how conservative media cover the stories of right-wing, anti-government cop-killers.

From Eric Frein, who allegedly shot and killed a Pennsylvania state trooper, which set off a manhunt this fall to Glenn Beck fan Richard Poplawski, who fatally shot three Pittsburgh police office in 2009 to the assassinations in June of two local policemen in a Las Vegas restaurant by Jerad Miller (who had hung with the Clive Bundy crew) and his wife Amanda, the right’s coverage of anti-government cop murderers has been sparse at best. As Eric Boehlert writes of the Miller case:

Raw Story reported that Miller “left behind social media postings that show his concerns over Benghazi, chemtrails, gun control laws, and the government’s treatment of rancher Cliven Bundy.” And according to an NBC News report, the shooter had talked to his neighbor about his “desire to overthrow the government and President Obama and kill police officers.”

This stands in sharp contrast to how Fox and friends have covered the Brooklyn killings, says Boehlert, by leaning “heavily on assigning a larger cultural and political blame.” Yet…

And critically, when they have touched on those deadly attacks, Fox talkers have stressed that it’s not fair to blame politics. Note that in 2013, after racist skinhead Michael Page started killing worshipers at an Oak Creek, WI., Sikh temple, and then murdered a police officer, Fox’s Andrea Tantaros stressed that the killing spree was an isolated event that didn’t have any larger implications. “How do you stop a lunatic?” she asked. “This is not a political issue.”

Progressives have been trying again and again to point out that protesting police brutality is not the same as protesting the existence of police, much less calling for their death. (After Fox host Brian Kilmeade painted Jon Stewart as anti-police, Stewart came back with: “By the way, jackass, you can truly grieve for every officer who’s been lost in the line of duty in this country, and still be troubled by cases of police overreach. Those two ideas are not mutually exclusive.”)

The tens of thousands of New York protesters have been overwhelmingly peaceful. It is true that some marchers in New York were chanting “What do we want? Dead cops!” about a week before the December 20 shooting of Ramos and Liu. But as the Daily Beast writes, “Evidence from photos, video, social-media posts and interviews suggests it was a single group, desperate to ‘turn up the anger’ at otherwise-peaceful protests.”

At a Monday press conference, after a reporter repeatedly asked de Blasio about the violent rhetoric, the mayor rather uncharacteristically, lashed out at the media. “It was wrong, it’s nasty, it’s negative,” he said. “They should not do that. But they, my friend, are not the majority. So stop portraying them as the majority.”

As if actual calls for “dead cops” weren’t disgusting enough, some in the media are so intent at portraying protesters as violent that they’re putting words in their mouths. Over the weekend, Fox TV affiliate WBFF in Baltimore was found to have deceptively edited footage of a Washington, DC, march to make it sound as if protesters were shouting “kill a cop.” As Gawker pointed out, the actual chant was: “We won’t stop, we can’t stop, ‘til killer cops, are in cell blocks,” but on WBFF it became: “We won’t stop, we can’t stop, so kill a cop.” (Al Sharpton had attended that march, and TPM found that “YouTube videos of the misinterpreted chant contain labels such as “Sharpton’s ‘Go Kill A Cop’ March.”)

WBFF said it was an “error” and apologized on-air to Tawanda Jones, who had led the nonviolent chant. She is the sister of Tyrone West, who died in police custody in 2013. Jones confronted the station, saying, “The interesting part that really gets to me is, where you guys edited it and stopped—like, how could that be a mistake?”

“Once you play that whole thing, you would know that’s not something that’s being said,” she added.

The station didn’t quite come up with an answer.