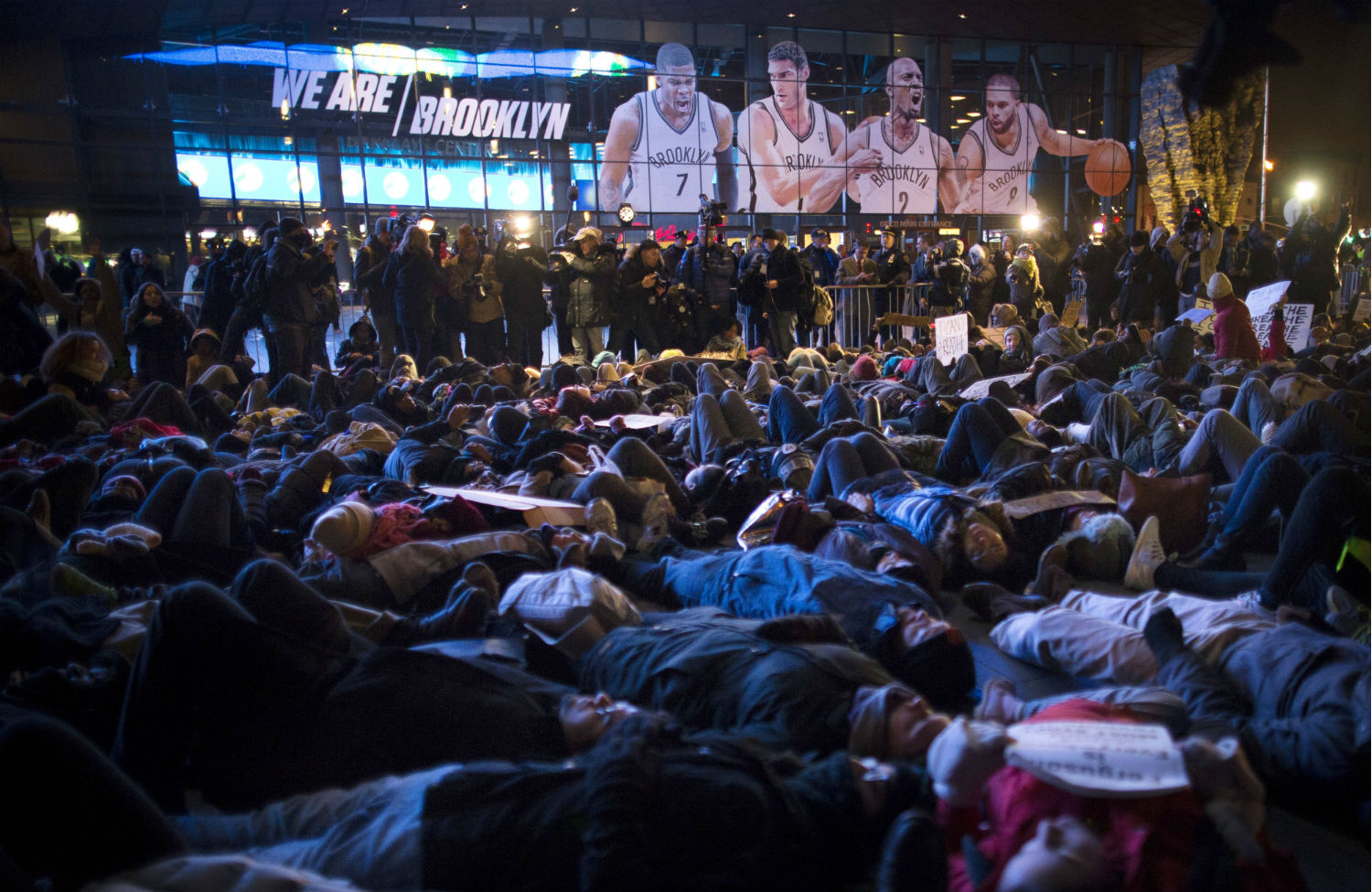 Protesters participate in a "die-in" during a demonstration outside the Barclays Center against a grand jury's decision not to indict the police officer involved in the death of Eric Garner, Monday, December 8, 2014. (AP Photo/John Minchillo)

Protesters took to the streets of New York again last night for Eric Garner, this time under the banner of what organizers called a “royal shutdown.” A mass demonstration greeted British royals William and Kate upon their arrival at Brooklyn’s Barclays Center for the Cavaliers vs. Nets game. Later that evening, LeBron James donned a T-shirt that read “I Can’t Breathe” in solidarity with the protest raging just outside. The shirt, which James hinted at wearing, was given to him by organizers of last night’s action, Justice League NYC, and was hand delivered by Jay-Z, a co-owner of the Nets.

Last night’s actions mark the sixth consecutive night of civil disobedience since the non-indictment of Officer Daniel Pantaleo came down from a Staten Island grand jury.

By 6:30 a large crowd was gathered in front of Barclays. Shouts of “I can’t breathe! I can’t breathe!” filled the wintry air as pedestrians and ticket holders looked on; some took iPhone pictures while others raised fists in solidarity. Protesters carried signs that read “All I Want For Christmas Is To Live” and “We Won’t Take It Anymore,” which the the art collective We Will Not Be Silent helped distribute. A phalanx of barricades pushed protesters chanting “How do you spell racist? N-Y-P-D!” to just a few feet from a line of police officers, who were trying to not look them in the eye.

After about a half an hour, the group held a die-in. “Let’s speak with our bodies, not with our mouths,” an organizer announced. He went on to ask for silence from those who would be observing but not participating in the die-in. In the wake of his pronouncement, only sounds from camera shutters, police radios and a helicopter circling overhead disturbed the silence, as hundreds of bodies lay still on the ground.

Like most actions taking place in New York and in cities across the country after the Eric Garner case, last night’s demonstration appeared to have been mostly unplanned apart from the time and place. Protests have been tightly timed—usually no more than two or three hours—and highly energetic. After the die-in, protesters took the intersection at Flatbush and Atlantic. Later, they would take over the Atlantic Mall, clashing with both police and private security. At least one protester was pepper-sprayed by police.

The “royal shutdown” action was organized and promoted on social media in part by the newly conceived and much buzzed about Justice League NYC, an offshoot of Harry Belafonte’s organization The Gathering for Justice. Carmen Perez, founder of the Justice League, was one of several organizers at last night’s action identifiable by the plastic crown she wore—a tongue-in-cheek commentary on the absurdity of a royal visit while protests rage in the streets.

“We have demands that need to be met,” Perez told The Nation plainly, shortly after the die-in concluded. She went on to explain that her group’s demands included concessions from both Mayor Bill de Blasio and Governor Andrew Cuomo. A full list of the demands of the Justice League are posted on its website with “the immediate firing of Officer Daniel Pantaleo and all officers responsible for the death of Eric Garner” as demand number one.

Last night’s demonstration also included a contingent of protesters from Ferguson who showed up in solidarity. Talal Ahmad, a student organizer at St. Louis University, told The Nation, “I’m here for Eric Garner, Akai Gurley, Tamir Rice, Kajieme Powell, Michael Brown, it goes on and on and on. New York came down strong to show love and solidarity, to make sure we had what we needed, so there wasn’t anything to even think about to come up here and reciprocate that.”

Ahmad and others at the protest are looking towards next steps for a movement that is at once spontaneous and intentional in securing wins. Demonstrators have been agitating in a reactive way, but their victories—including last night’s on the court—have been undeniable. “I think that people are going to continue to vent for a little while, we’re going to be in the streets for a little while. But then we’re going to get more organized,” Ahmad said.

Last night’s actions indicate a turning point. The movement is gaining momentum—and allies in high profile places—but it is also growing restless. Organizers have no intention of slowing down, but their challenge now is to channel that energy into a sustained strategy for making change.