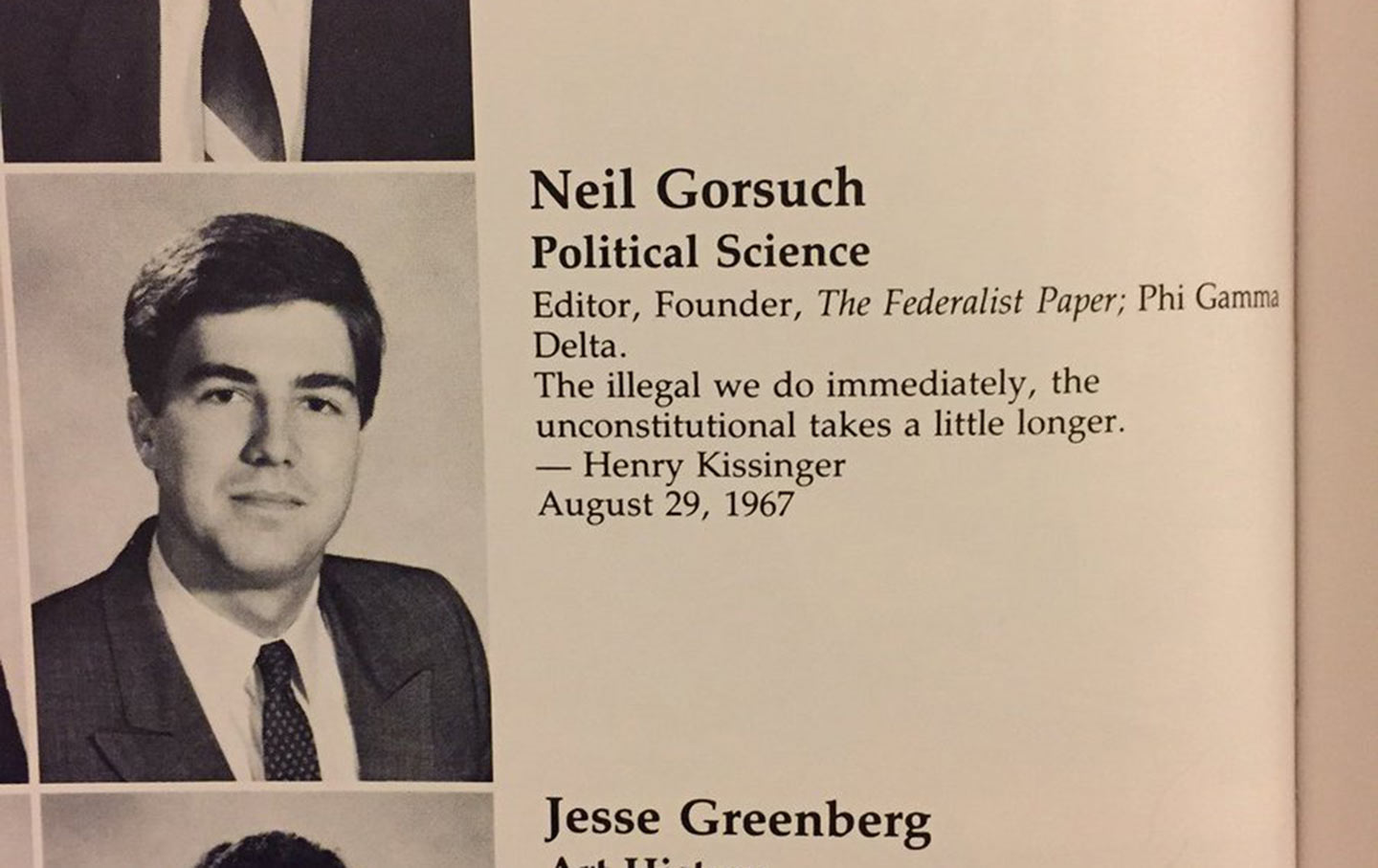 Shortly after Donald Trump announced the nomination of Neil Gorsuch to the Supreme Court, it was revealed that Gorsuch had picked a Henry Kissinger quotation to caption his 1988 Columbia yearbook photograph: “The illegal we do immediately, the unconstitutional takes a little longer.”

It’s an odd remark for someone whose primary credential is his supposed textual fidelity to the Constitution. But it makes sense, when one considers that Gorsuch hails from a family of political hacks, including a mother, Anne, who was Ronald Reagan’s first director of the Environmental Protection Agency. The EPA, signed into law by Kissinger’s boss, Richard Nixon, was but a decade old when Anne Gorsuch took over and, through a combination of corruption, mismanagement, and Trump-style vindictiveness, nearly destroyed it. “Anne Gorsuch inherited one of the most efficient and capable agencies in government,” The New York Times wrote in early 1983. “She has turned it into an Augean stable, reeking of cynicism, mismanagement and decay.”

The EPA recovered, somewhat, after Gorsuch’s mom’s tenure, but it might not survive the twin blows of Scott Pruitt at its head and Gorsuch on the Supreme Court. Patience, patience, as Kissinger counseled. All good things in time.

Kissinger’s remark wasn’t a one-off but part of his routine, the urbane wit that journalists continue to swoon over.

Kissinger’s remark wasn’t a one-off but part of his routine, the urbane wit that gossip columnists and foreign-affairs journalists continue to swoon over. This particular joke was used to disarm reporters’ attention to Kissinger’s role in Watergate, which was substantial and should have brought him down along with Ehrlichman, Haldeman, and the rest. But compared with these charmless “Prussians,” Kissinger was practically Noël Coward. One of the first times “the illegal we do immediately” quip was printed in public, as far as I can tell, was when it was entered into the Congressional Record in 1973, in opposition to Kissinger’s nomination as Secretary of State (prior to that, as Nixon’s National Security Adviser, Kissinger hadn’t needed Congress’s consent): “joking about Watergate and the constitution…exemplifies his notorious lack of any capacity for moral leadership; per his reported statement: ‘The illegal we do immediately. The unconstitutional takes a little longer.’ Elitist, professional ‘humor’ such as this disqualifies for high office.”

A month later, on October 28, 1973, The New York Times was running it as part of a compendium of Kissinger humor, in a column titled “The Sayings of Henry Kissinger.” Recently, a declassified document reveals that Kissinger repeated the joke to Turkey’s foreign minister in 1975, as the two men discussed ways to bypass a Congressional ban on arms sales to Ankara. “Before the Freedom of Information Act, I used to say at meetings, ‘The illegal we do immediately; the unconstitutional takes a little longer.’ [laughter] But since the Freedom of Information Act, I’m afraid to say things like that.” By 1977, when Kissinger was leaving office, his well-wishers were quoting it back to him in tribute. Oh, that Henry!

The Kissinger quote was just one clue to Gorsuch’s politically randy youth.

The Kissinger quote was just one clue to Gorsuch’s politically randy youth. There’s a precocious photograph of him reading William F. Buckley’s Up From Liberalism, and claims that he helped found a high school group called “Fascism Forever.”

For Doug Henwood, who writes on economic matters and often contributes to The Nation, these photos of Gorsuch were like taking a bite out of Proust’s madeleine, returning him to his college days, when he was a member of the Party of the Right. Here Henwood provides some context that might help us understand Gorsuch’s youthful flirtation with anti-constitutional fascism:

Seeing the pic of Gorsuch reading William F. Buckley’s Up From Liberalism decorating the Daily Mail story on his high school membership in a “Fascism Forever” club really took me back. I read Buckley’s book my senior year in high school, and it, along with Milton Friedman’s Capitalism and Freedom, was one of the things that turned me into a movement conservative. The fact that it was deeply unfashionable in the early 1970s was probably one of the things that drew me to it. So the moment I got to Yale as a freshman, I joined the Party of the Right, a highly curious institution with not many more than a dozen active members that was part of the Yale Political Union. (I wrote about the experience here and here.) Ideologically it was a mix of libertarians, neo-Confederates, and even monarchists, though most of the monarchists had recently split off into a Tory Party. Regardless of the flavor, though, the POR was contemptuous of the masses and had only a limited taste for democracy. To party members, Charles I’s execution speech is a sacred document. Moments before the deposed monarch’s head was chopped off, he declared the people deserved no “share in government,” because “that is nothing pertaining to them. A subject and a sovereign are clean different things.”

One of the ways that this contempt for the masses was expressed was through Nazi jokes. Right after I joined, I observed a senior member of the POR paging through the freshman facebook (the old paper kind), speculating on what the skull structure of the women in it said about their intelligence and character. (It must be admitted that skull science was a feature of American eugenics, which the Nazis learned a lot from.) We loved an old Yale song that almost no one sang anymore because it sounded too much like “Die Wacht am Rhein.” And when the German department sponsored a showing of Leni Riefenstahl’s Triumph of the Will, we were practically the only ones who went. All this was accompanied by ironic smirks, but it was irony of the defensive kind, the sort that allowed you to indulge your violently elitist tendencies without taking responsibility for them. I’ve heard some Gorsuch apologists saying the “Fascism Forever” thing was just a joke, but I remember that sort of joking quite well. It’s not very funny.

The club, we are told by one of Gorsuch’s prep school teachers, was “a total joke.” Right. Now who was it that said the use of jokes goes “beyond the production of pleasure” and “points the way to their future uses”? A joke is not about making one laugh but about signaling intent.

“I remember that sort of joking quite well. It’s not very funny.” —Doug Henwood

Writing about our moment’s other great wit, Milo Yiannopoulos, Daniel Penny at The Boston Review reminds us of Susan Sontag’s 1975 New York Review of Books essay “Fascinating Fascism,” which considered the way in which the aesthetics of fascism came to be erotically cool among artist types. In that early pre-postmodern era, fascist images were part of the pastiche, powerful because they continued to have the “power to shock: a singular virtue to those who take for granted that art is a sequence of ever-fresh gestures of provocation.” Gorsuch seems to be very much the type that Doug is describing, the wedding of Nazi ethics concerning hierarchy, state power, and the market to a New Left anti-establishment élan. Looking at those pictures of Gorsuch reading Buckley, around the time he is flirting, ironically, as we will be told in Senate hearings, with fascism, one can see the performance art. His reading of Buckley echoes a famous photograph of Che reading Goethe in bed, which circulated widely in the 1970s. In this photo, Gorsuch seems to be posing as Mario Savio or Tom Hayden, imagining himself breaking into history, or straddling it, or whatever it was that Buckley told his young acolytes to do.

Sontag, as Penny writes, sensed that the appropriation of fascism was a “potentially corrosive aesthetic dead-end.” The corrosion has seeped deeply into our politics, with Milo representing only one side of the Trump spectrum. On the other side stands the “sincere,” “thoughtful,” and “prayerful” Gorsuch. “Fascism is theater,” Sontag quotes Genet as saying, and we are getting a lot of that, not just with Trumpian spectacle but with what we can expect to be an extremely sober performance of Gorsuch before the Senate committee, as he distances himself from his youthful irony.

Doug Henwood is recalling, and Sontag is writing about, the 1970s, a period that was somewhat distant from actual Nazism yet prior to the political ascension of the New Right. Gorsuch, in contrast, was playing with fascism after Ronald Reagan’s 1980 election and quoting Kissinger in the wake of Iran-Contra, which codified Kissinger’s maxim as practice.

As a Supreme Court justice, Gorsuch will be ruling on matters of national security, and since much of Trump’s foreign policy is little more than an updating of the Nixon/Kissinger Doctrine—that is, relying on repressive allies to do the US’s dirty work, with the promise not to criticize human-rights violations which that work entails—Gorsuch’s affection for this particular Kissinger quotation is troubling. When Kissinger used it in 1975 with Turkey’s foreign minister, he was trying to find a way to work around the congressional cutoff of military aid to Turkey, due to its invasion of Cyprus. That same year, Kissinger also worked to make sure arms continued to flow to Indonesia’s Suharto, to whom Kissinger gave the green light to invade East Timor. “It is important that whatever you do succeeds quickly,” Kissinger said, so as to prevent a law that automatically bans arms sales to aggressor nations from kicking in. The mass murder of East Timorese followed. Fascism yesterday, fascism today.

“It is Götterdämmerung time,” Sontag wrote in 1975.