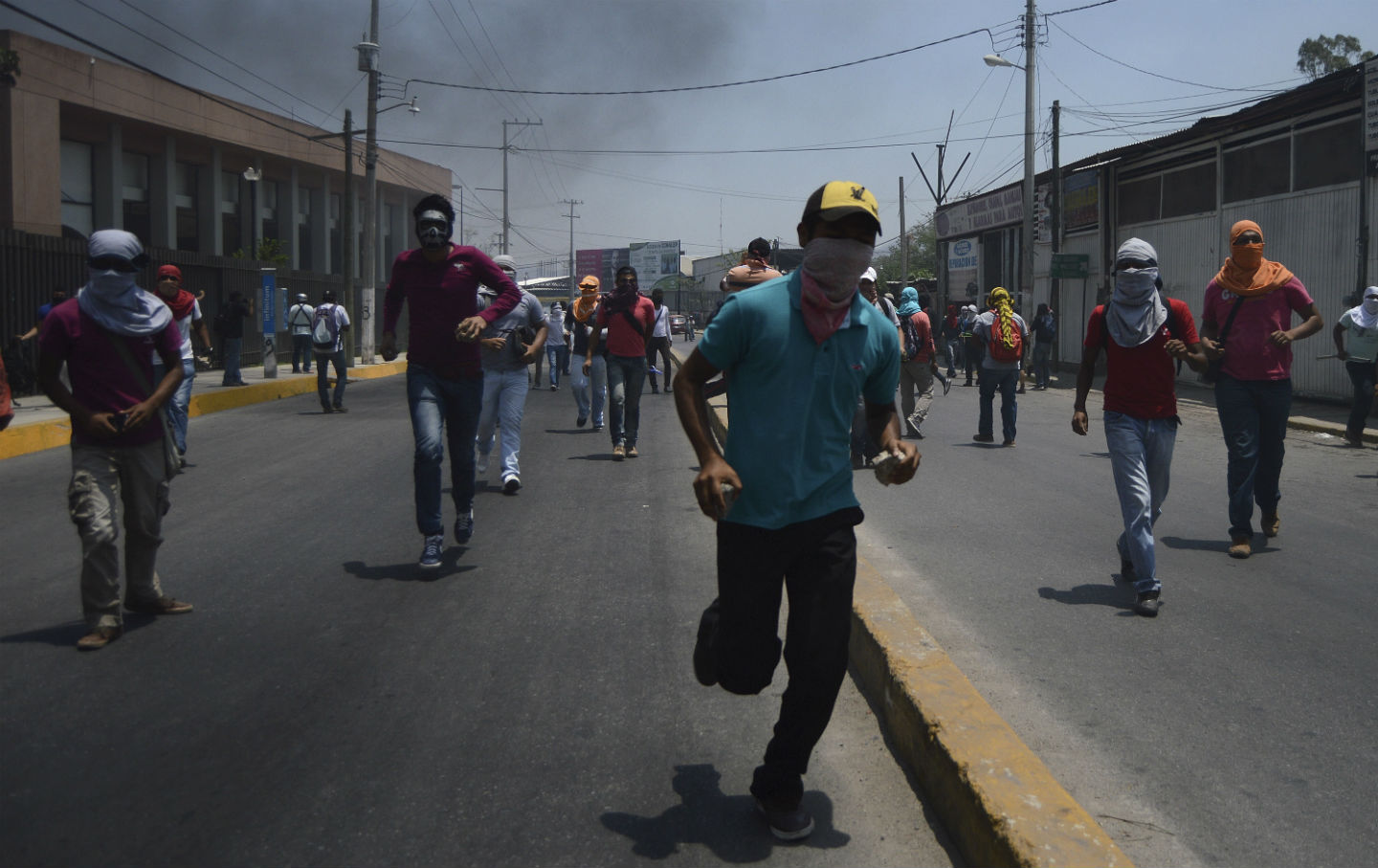 Members of the State Coordinator of Teachers of Guerrero (CETEG) run away from tear gas during a protest to mark the seven months of the Ayotzinapa students’ disappearance in Chilpancingo, Mexico, on April 26, 2015. (Reuters / Emiliano Torres)

There’s been too little discussion of Latin America through the Democratic primary, including at last night’s debate, which didn’t touch on it. One candidate, Bernie Sanders, doesn’t have much of a track record to examine, although his broad rejection of neoliberalism and interventionism bode well for turning a page on US policy in the region. The other, Hillary Clinton, has accumulated a deep record, both before and during her tenure as secretary of state, which is worth examining in depth. So, in the interest of helping New Yorkers decide as they head to the polls on Tuesday, here’s a brief guide:

Honduras: By now, Clinton’s involvement in helping to institutionalize the 2009 coup against a reforming president who had the support of all of the country’s most courageous and bravest people—land reformers, gay activists, unionists, feminists, environmentalists, and so on—is well known. “Women’s rights are human rights,” Clinton famously declared. But in Honduras, she worked to legitimize the overthrow of a government that was trying to make the morning-after pill available and advance the rights of members of the LGBT community. In so doing, Clinton helped install a regime that has been killing women and men at an impressive clip. Death squads have returned to the country.

Just last week, in her interview with the New York Daily News, Clinton revised her story regarding her actions in Honduras yet again (after having cut the most damning paragraphs from her book Hard Choices). Then she said, “We need to do more of a Colombian Plan for Central America.”

Colombia: The idea that Hillary Clinton wants to do to Central America what her husband did to Colombia is troubling.

Here’s what Plan Colombia did to that country: In 2000, just before leaving the White House, Bill Clinton ratcheted up military aid. Plan Colombia, as the assistance program was called, provided billions of dollars to what was the most repressive government in the hemisphere. The effect was to speed the paramilitarization of society, with government—and military—allied death squads penetrating the intelligence services, judiciary, municipal government, legislature, and executive branch. Washington money effectively subsidized the narco-right’s enormous land grab. According to the US government’s own figures, “in rural areas, less than 1% of the population owns more than half Colombia’s best land.” “Torture, massacres, ‘disappearances,’ and killing of non-combatants” became routinized, with trade unionists, peasants, and Afro-Colombians the main victims. The CIA’s own World Factbook says that a staggering 6.3 million Colombians have been internally displaced (IDP) since 1985, with “about 300,000 new IDPs each year since 2000”—that is, the year Bill Clinton enacted Plan Colombia. Added up, that’s 2.4 million people during Clinton’s eight-year presidency.

After Plan Colombia came the Colombian Free Trade Agreement. Hillary Clinton opposed the treaty when she was running against Barack Obama in 2008, but then supported it as secretary of state. Yet, even as she campaigned against it, Bill Clinton was paid $800,000 by the Colombia-based Gold Service International to give four speeches in Latin America, where he advocated for the agreement. Mark Penn, Hillary’s chief adviser in her 2008 campaign, was likewise meeting with Colombian officials to tell them not to worry, that were Clinton to become president, she’d reverse her opposition. When asked about such conflicts, Clinton laughed, and laughed. “Oh my,” she said, before asking the reporter, “How many angels dance on the head of a pin?” Thus concerns about corruption are as quaint as medieval Catholic scholasticism. If those angels were made up of Colombian trade unionists executed between when the trade treaty went into effect and early 2015, the answer is 105—along with many hundreds more Afro-Colombian, peasant, and environmental activists.

In the Brooklyn debate, Bernie Sanders didn’t give a specific answer when asked for an example of when Clinton changed her policy as a result of financial contributions. Let’s then go to David Sirota, Andrew Perez, and Matthew Cunningham-Cook, writing about the fossil-fuel interests behind Clinton and Colombian free trade:

At the same time that Clinton’s State Department was lauding Colombia’s human rights record [despite having evidence to the contrary], her family was forging a financial relationship with Pacific Rubiales, the sprawling Canadian petroleum company at the center of Colombia’s labor strife. The Clintons were also developing commercial ties with the oil giant’s founder, Canadian financier Frank Giustra, who now occupies a seat on the board of the Clinton Foundation, the family’s global philanthropic empire.

The details of these financial dealings remain murky, but this much is clear: After millions of dollars were pledged by the oil company to the Clinton Foundation—supplemented by millions more from Giustra himself—Secretary Clinton abruptly changed her position on the controversial U.S.-Colombia trade pact.

Also see Ken Silverstein’s reporting on Colombia and the Clintons. Really, who could blame Wolf Blitzer for not asking any questions about these conflicts of interest. Where would he start?

Haiti: Haiti may be the nation most vulnerable to the psychopathologies of Clintonian political economy and philanthropy. There’s too much to say about the Clintons’ grip on Haiti, so I’ll just point readers to the best of the reporting. Here’s Ted Hamm, “How Hillary Helped Ruin Haiti”; Jonathan Katz’s “The Clintons’ Haiti Screw Up” and “The King and Queen of Haiti”; The New York Times on the topic; and Isabel Macdonald and Isabeau Doucet, in The Nation, on those formaldehyde-laced trailer homes the Clinton Foundation sent to Haiti after the earthquake. And here’s Bill Clinton himself, apologizing for forcing Jean-Bertrand Aristide to implement neoliberal economic policies that destroyed Haiti’s ability to produce its own rice: “It may have been good for some of my farmers in Arkansas, but it has not worked. It was a mistake. It was a mistake that I was a party to. I am not pointing the finger at anybody. I did that. I have to live every day with the consequences of the lost capacity to produce a rice crop in Haiti to feed those people, because of what I did. Nobody else.”

As Secretary of State, Clinton administered punishing security and economic policies toward Mexico.

Panama: As she was about to run for president in 2008, Clinton opposed a free-trade agreement with Panama—an agreement that, as Sanders pointed out, would make the kind of money-laundering we learned about from the Panama Papers even more pervasive. But as soon as she became secretary of state, Clinton successfully pushed for the treaty, despite being warned that it would make it easier for the rich to hide their money, as Clark Mindock and David Sirota  write.

Mexico: As secretary of state, Clinton continued to administer the punishing security and economic policies put into place by her husband and his successor, George W. Bush, policies that have turned Mexico into a country of mass clandestine graves. Clinton’s own contribution to Mexico’s misery was to push for the privatization of its national petroleum industry. As Steve Horn has written in detail on DeSmog blog, not only did the Clinton State Department help open up of Mexico’s oil sector to foreign capital, a number of Clinton’s close aids then moved into the private sector to profit from that opening. It was FDR who forced US oil interests to accept Mexico’s nationalization in the 1930s, so here we have a case of Hillary Clinton quite literally rolling back the New Deal.

Paraguay: Honduras wasn’t the only Latin American country to suffer a “constitutional coup” (the overthrow of an elected leader through formally legal mechanisms) under Clinton’s State Department watch. In Paraguay, a leftist former Catholic priest, Fernando Lugo, was removed from office at the behest of his agroindustry opponents. Nearly all other Latin American nations called it a coup. But not Clinton’s State Department, which quickly recognized the new government.

Beyond any one country or policy, these policies fed off of each other. Bill Clinton’s multibillion-dollar aid program to one of the worst human-rights violators in the world, Plan Colombia—which Hillary Clinton now recommends for Central America (though it’s hard to see how the United States could militarize the region any more)—had the effect of diversifying the violence and corruption endemic to the cocaine trade, with Central American and Mexican cartels and military factions taking over export of the drug to the United States. This, along with the collapse of Mexico’s and Central America’s agricultural sector caused by NAFTA and CAFTA, kicked off the cycle of criminal and gang violence that today engulfs the region. This violence, in turn, has been accelerated by the further privatization of the economy (of the kind that Clinton’s ambassador forced on El Salvador) and the rapid spread of mining, hydroelectric, biofuel, and petroleum operations (of the kind that took over Honduras after the 2009 coup and that donates to the Clinton Foundation), which wreak havoc on local ecosystems, poisoning land and water. The violence has also been accelerated by the opening of national markets to US agroindustry, which destroys local economies. The ensuing displacement either creates assorted criminal threats that justify harsher counterinsurgency measures or provokes protest, which is dealt with by new-style death squads—of the kind that killed Berta Cáceres and hundreds of others in Honduras (and Colombia, Guatemala, and El Salvador).

The militarization of the border—which began with Clinton, as per Rahm Emanuel’s recommendation that he build on the success of his 1994 crime bill—worked symbiotically with Clinton’s NAFTA, and later CAFTA, to create a three-tiered, nested market: free and common for capital; protected for US agriculture; divided and garrisoned for labor. Mexico can stay competitive with the United States only by keeping its hourly pay brutally low. Wages are worse in Central America. In the United States, the wage system has collapsed; think of that rising suicide rate among the white working class that made headlines a few months ago as a NAFTA bump.