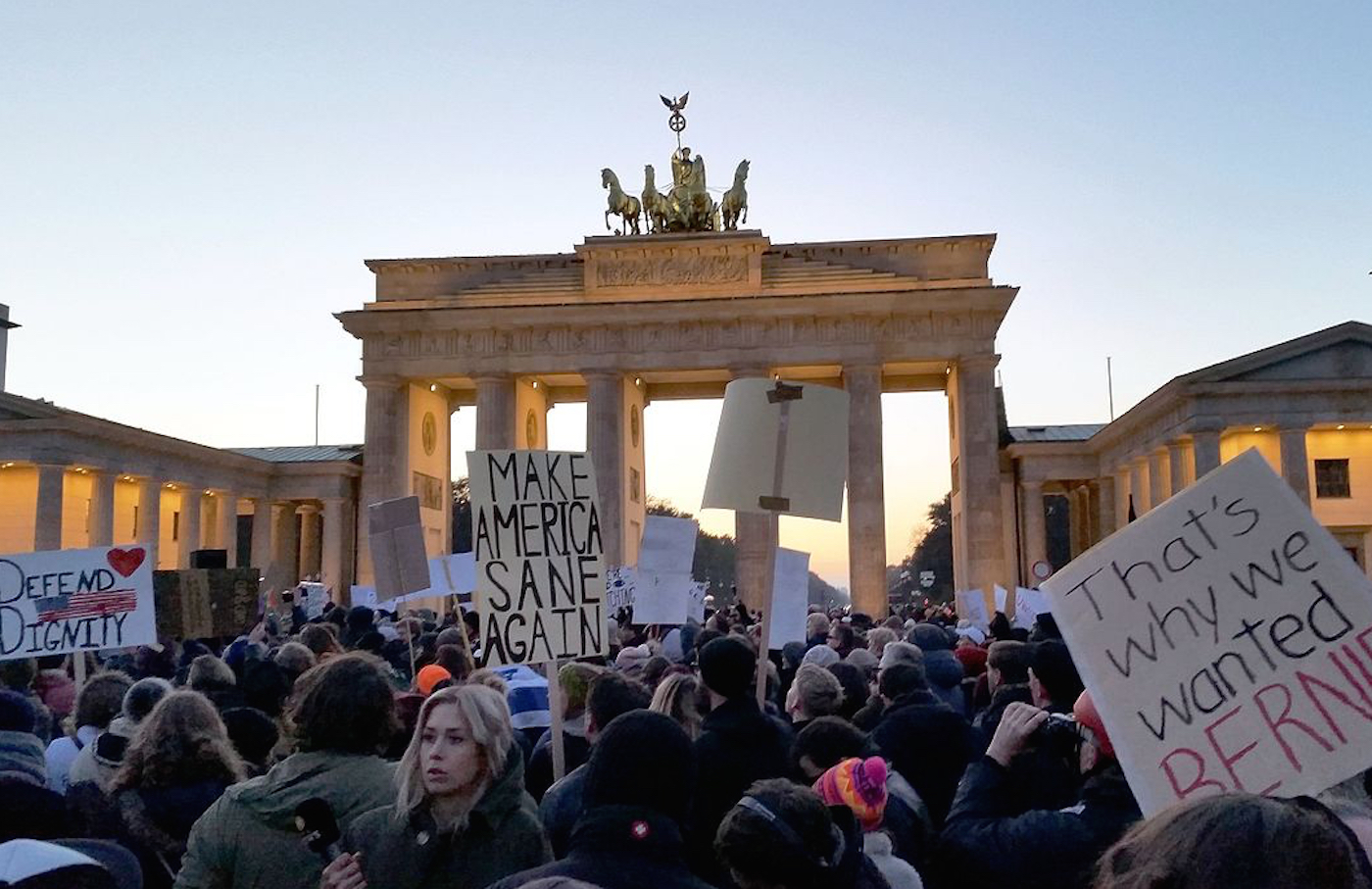 An anti-Trump protest in Berlin, Germany, in front of the Brandenburg Gate. (Wikimedia Commons)

Whatever shape American foreign policy takes in the next four years, it will very probably be unlike anything we have ever seen. A contradictory melange of dime-store isolationism and saber-rattling fit to make a neocon blush—promises to reinvest at home laced with pledges to “bomb the shit out of” enemies abroad—the Trump Doctrine seems to boil down to a single phrase: America First. Little of use can be said about its real-world meaning without reference to its origins among a crowd of Americans in the early 1940s who thought the evils of fascism had been overblown. By all accounts, nationalism has returned. Ask not whether it ever really left.

While it would seem that progressives in the United States and, increasingly, around the world have little power to determine the shape of things to come, that may not actually be the case. Whether the left ratifies this new turn toward nationalism may determine whether the various upheavals since the Brexit referendum last June prove to be the inauguration of a brave new world or the dying gasps of a very old one. In this forum—an installment of our ongoing series, “That’s Debatable“—three writers consider the major foreign-policy questions facing the left today: whether to renew or reconsider its historic commitment to a politics of internationalism, and what a new and improved version of that commitment might look like.

A Solidarity of Leftists

The fight for social democracy takes place in one state after another, and it is there we must find our comrades.

Solidarity with comrades abroad is the oldest definition of left internationalism. We look for people who are fighting for equality, democracy, and freedom anywhere in the world, and we join their fight. Think of this as the foreign policy of the left. This is what all our organizations—parties, unions, NGOs, magazines—should be doing. Mostly, these fights go on within states, because right now the state is the most effective agent of human rights and economic justice. The regulation of laissez-faire capitalism was a social-democratic achievement, and it was achieved only in the state. That is where it must now be defended, by internationalists, against globalization. The European Union promised an expansion of the social-democratic achievement—a promise unfulfilled but one still worth fighting for. The fight takes place in one state after another, and it is in those states that we must find our comrades. Two simple examples: Our comrades in Greece are the people fighting against austerity, and our comrades in Germany are the people fighting against the bankers.

Of course, we oppose our own bankers and the neoliberal policies and the unjust wars of our own government—always working with comrades abroad who are resisting those policies and wars in the name of equality, democracy, and freedom. This resistance will probably be a central part of our politics in the age of Trump, though if Trumpism means isolationism we may have to support comrades abroad who need American help.

The choice of comrades is the test of left internationalists. Ours is not a self-regarding politics; it requires listening to and cooperating with other people. Which other people? Our comrades abroad are never the rulers of authoritarian states or their collaborators or their apologists. Where there are tyrants, we support dissidents. We support workers struggling to organize independent unions; we support writers whose books can’t be published in their own countries; we support feminists defending gender equality against patriarchal regimes; we support heretics and free-thinkers threatened by a ruling zealotry. Left internationalism is a solidarity of leftists.

The past few years have given rise to a strange political chimera: the right-wing ethno-nationalist party that denounces free trade, international cooperation, and the “global elite” all while cheering for—and even financially supporting—its fellow far-right white supremacists around the world. Rhetorically, these parties put their countries first, in the form of Brexit or Donald Trump, yet they nevertheless remain invested in a worldwide nationalistic project, and go out of their way to help like-minded parties achieve their own far-right ethno-nationalist goals.

Call it global nationalism, or the ethno-national internationale. The nationalists have come up with a version of internationalism. Whatever the hell it is, it’s gaining traction, and the left isn’t coming up with much of an alternative. Where to begin?

The lesson is that progressives ought to start thinking of their causes as global ones, too, even if they begin as territorially constrained national initiatives. If the success of Bernie Sanders’s presidential campaign is any sign of what’s to come, redistribution, in the form of tax policy and social-welfare programs, will be crucial to winning constituents at home—and key in winning allies and support abroad.

It’s understandable to want to deal with domestic problems first and foremost. But an “America first” policy won’t make sense if “America” means American power and American companies and “first” means military domination and corporate profits. The only way Americans will “win,” in Trumpian parlance, is if they have a strong social safety net to ensure that basic rights like education, health care, food, and shelter are covered. That’s what will make Americans, America, and everyone else living in it great.

This is harder to pull off than promoting nationalism around the world on Twitter, as the right-wing parties do. The nationalist calculus is that, once these countries are sealed off from the world with walls and tariffs, they’re on their own. The global nationalist rhetoric is a ladder to power that gets thrown away once the parties in question win.

A global leftist movement can’t stop there, because it needs to put forth a vision that’s good for people in the long run and that ensures that countries work together both to maintain peace between nations and prosperity within them.

Borders do matter. You can’t redistribute anything without boundaries, and you can’t provide for all people in the world equally given our current political infrastructure.

The problem is that we’ve never seen a version of globalization that didn’t put companies first and workers last. We forget that what we refer to as “globalization” was actually a series of agreements reached by national governments that simultaneously gave enormous power to the private sector and gutted the public one. You can’t fix that by walling yourself off from the world. You do that by setting an example. A left internationalism will also take care to protect and encourage diversity and multiculturalism within and across national borders.

The Bars on the Cage

The reasons to revive a left internationalism are morally clear and compelling. Systems of profit and violence, inequality and vulnerability, have gone global, and fights against them must as well. Capital mobility, technology, supply chains, and other factors exacerbating the divide between rich and poor treat borders as mere afterthoughts. The same goes for regional violence and collapse, as in the Middle East, where American intervention has been a toxic catalyst to instability. Climate change reminds us that nations are unnatural, that borders are graffiti on the surface of a changing planet growing more dangerous by the year.

Climate change reminds us that nations are unnatural, borders graffiti on the surface of a changing planet.

Borders, it can seem, mostly trap people in zones of deeply unequal resources and savagely unequal vulnerability. Which country you are born in accounts for about two-thirds of your lifetime income. Borders form the bars on the cages of humanity all across the world.

Internationalism is basically an effort to take the mobilization of democratic politics to the scale that globalism has given to 21st-century capitalism. It can seem to be the only decent politics at a time when nationalism—explicit and naked—is the politics of the indecent. The electoral insurrections behind the rise of Donald Trump and other so-called populists of the right, from Brexit impresario Nigel Farage to the quasi-fascist parties of Eastern Europe, thrust forward ethnic and religious ideas of “the nation,” “the homeland,” or “real Americans.”

But does being against these grotesque nationalisms mean being for their opposite, and what could that opposite, internationalism, be? There is nothing inherently progressive about defying or dissolving borders. Hawks have their humanitarian interventions, which look more opportunistic and more reckless with every decade. Neoliberals have their globalism, which has built this world of supply chains and mobile capital. Internationalism can sometimes provide cover for invasion, plunder, and less vivid forms of exploitation. Getting beyond the nation-state does not necessarily mean progress.

More importantly, getting beyond the nation-state is an illusion, at least for now. Democratic politics requires collective action, and the state is the uniquely effective vehicle of that action. A left globalism would need to work the levers of nation-states. Every form of organizing that leftists care about interacts intensely with national laws. No strategy of horizontal, leaderless, or otherwise extra-state organizing can overcome the fact that nation-states do a tremendous amount to shape the ground where it must work. The conditions of internationalism are inevitably set by nation-states.

Can the Left Reclaim Nationalism?

Should We Stay or Should We Go? A Debate Over Brexit

What Happens to a Feminist Dream Deferred?

In this situation, internationalism means building movements and constituencies that are at once national and international. History confirms that this is possible, though hardly easy. International Workingmen’s Associations in the 19th century were alliances of unions fighting for factory safety and shortened work-days in national parliaments and coordination of labor strength toward the possibility of international actions, such as solidarity strikes. In an even less democratic world, abolitionist networks turned their elite and middle-class influence on their national governments toward international reform. Today, ironically enough, religious or national identity is more likely than class interest or economic reform to cross borders: Christian solidarity groups have been pressing for years for Donald Trump’s proposed priority for Christian refugees from the Middle East, and immigrants pressing their new governments to intervene in the affairs of their old ones is a very old story.

What we lack today is a sense of class position in the global economic order as an aspect of identity and self-interest—perhaps even as the most important one—and as a locus of political action. The nationalist turn in recent economic “populism” is a mark of how elusive this understanding is today. Perhaps an under-appreciated power of the old, Marx-inflected version of left-wing internationalism was that it leapt over some of the structural challenges to internationalism with an enabling myth about how revolution would happen: the conviction that the international working class was an agent in history that would bend its shared effort to create a different world. That way of viewing the situation turned a shared problem—the bars on the cage—into a source of solidarity. We still have the problem. We need to keep working on versions of both solidarity and strategy that the left can take seriously in today’s world.