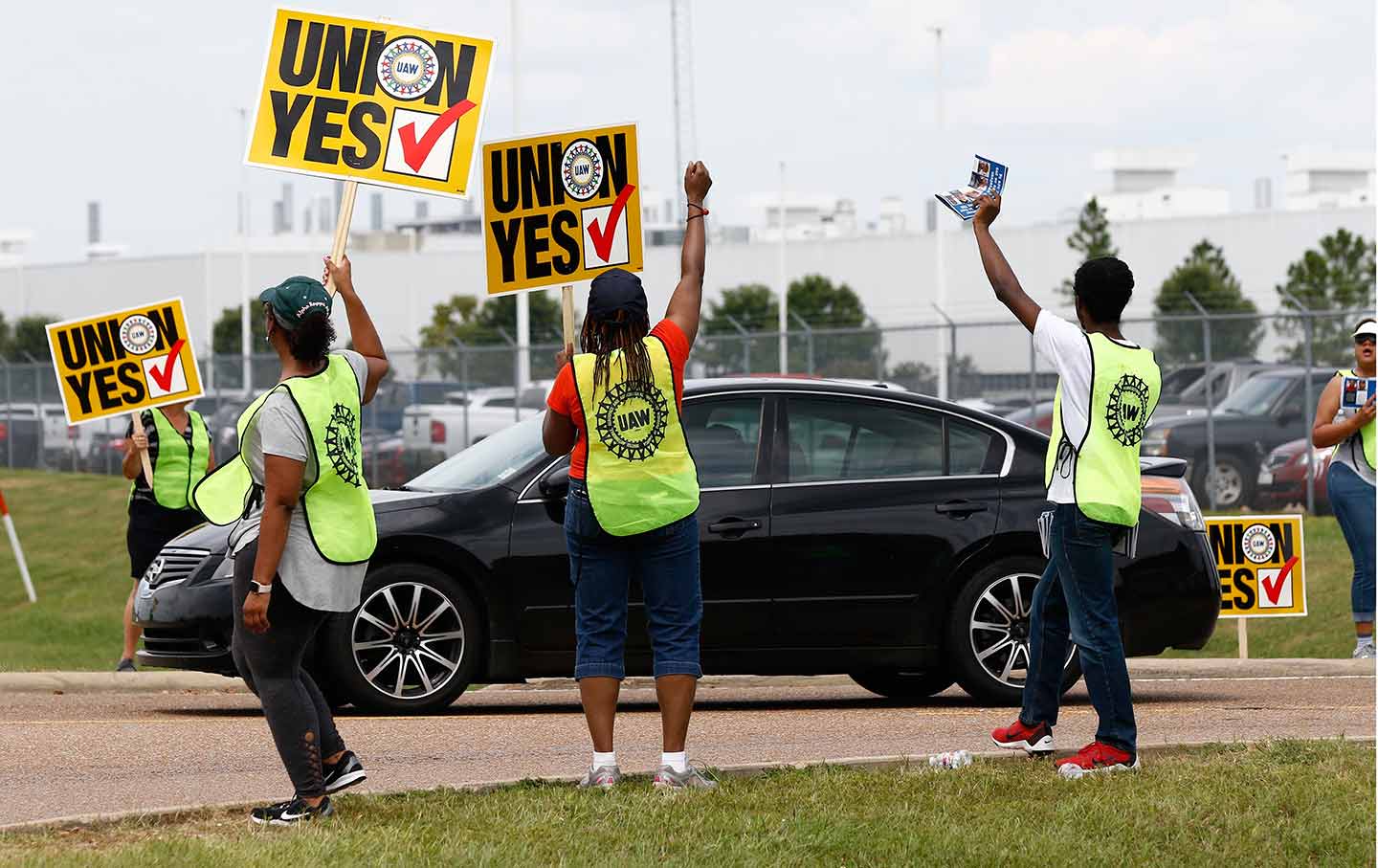 The United Automobile Workers union and its allies in the labor and civil-rights movements have been organizing for years to get a union at the sprawling Nissan Motor Company vehicle assembly facility in Canton, Mississippi. But most Americans became aware of the struggle only this year, when Senator Bernie Sanders, actor Danny Glover, and NAACP President Cornell William Brooks joined union activists and labor leaders for a “March on Mississippi” that sought to highlight abuses of worker and civil rights at the factory.

Despite taking place in a community of just 13,189, the March 4 show of solidarity was one of one of the largest rallies Mississippi has seen in years.

An estimated 5,000 labor and civil-rights activists undertook an urgent mission to highlight unsafe working conditions and mistreatment of workers at the plant where an overwhelming majority of workers are African Americans. It called on Nissan to stop resisting union organizing efforts, and to allow a free and fair vote on whether workers can exercise their right to collectively bargain. 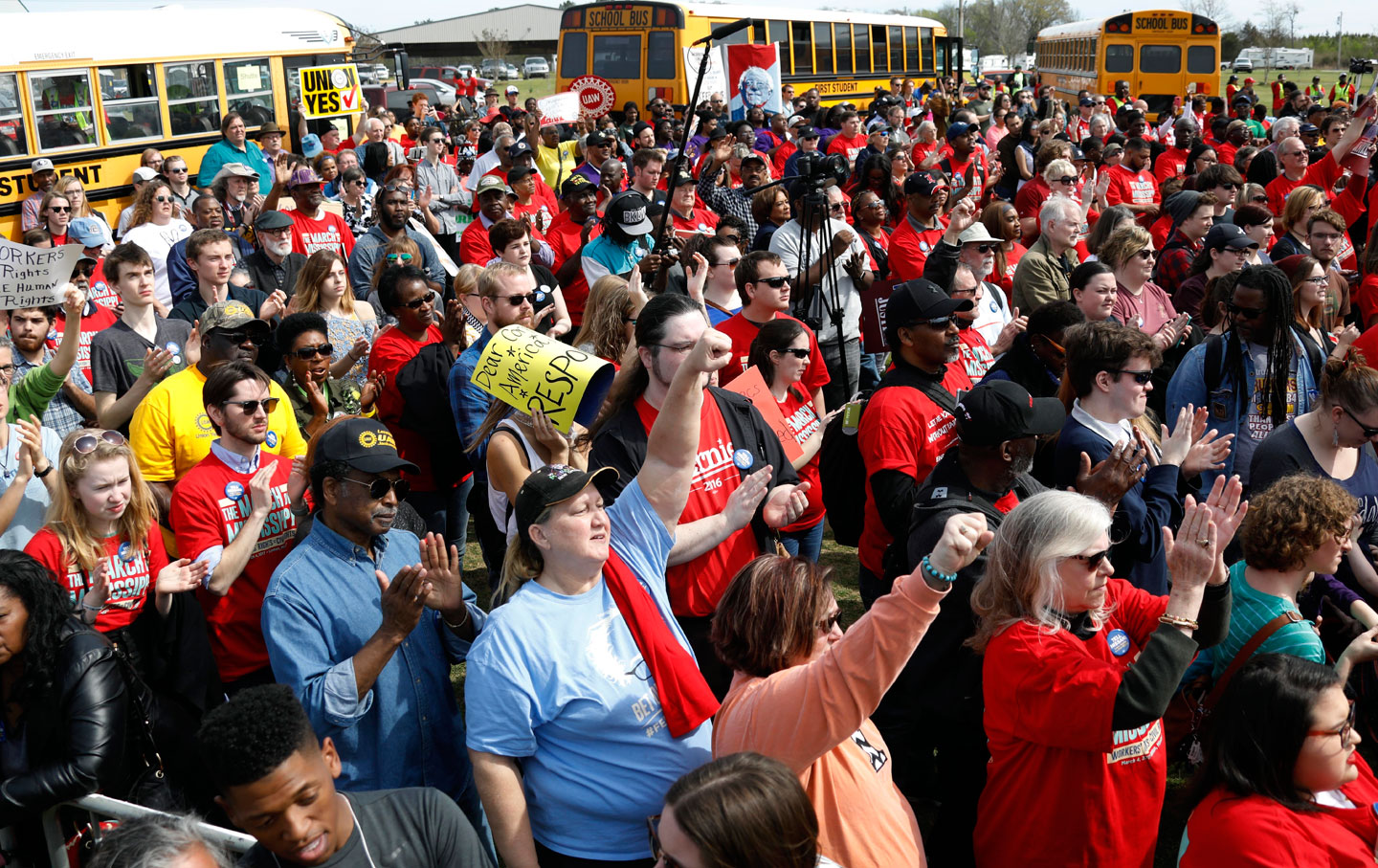 How the Left Can Win in the South

The union representation vote by more than 3,500 Nissan workers takes place today and tomorrow, amid complaints that the company has continued to resist the UAW’s efforts. Just this week, the National Labor Relations Board charged that Nissan had violated workers’ rights with its over-the-top anti-union pressure tactics. And this isn’t the first time Nissan has drawn their attention.

Organizers say the Canton plant has been the target of a long “Workers’ Rights = Civil Rights!” campaign because, as Glover has noted:

In late 2015, the National Labor Relations Board charged Nissan and a temporary worker agency with violating workers’ rights in Mississippi. The board found that Nissan unlawfully threatened to close the plant if workers unionized; threatened employees with termination for union activity; and unlawfully interrogated employees.

The Occupational Safety and Health Administration has also issued multiple citations against Nissan for violations of federal safety and health laws. The most recent citation, issued in February, resulted after a plant technician’s left hand was caught in a conveyor belt when the machine started unexpectedly.

Nissan’s mistreatment of its workers is unconscionable, but it should also sound familiar to those who know history. The economic oppression of black workers began with slavery, continued in the Jim Crow era and now takes the form of suppression of union activity. Equal rights means the right to have a voice and a seat at the table with all the other stakeholders of Nissan.

“People get hurt too often at Nissan and these injuries can rob us of our ability to provide for our families,” explained Ernest Whitfield, a 13-year employee at the Canton plant, where the UAW has identified “systematic, prolonged and serious violations of labor rights.”

Since the August 3-4 vote was announced, the UAW has detailed instances of “unlawful behavior and threatening and intimidating and coercing of workers” by Nissan. But that didn’t stop Mississippi Governor Phil Bryant from telling the workers they should reject unionization. He has tried to make the fight both personal and political—going as far as to attack Sanders by name.

“I don’t think we need a union to come in there and tell us how to make a better automobile,” says the Republican governor. “They can get back on the Bernie Sanders bus and go back to New York, and I’ll pay their way.”

But Sanders isn’t distracted by Bryant. He has maintained a steady focus on the company, arguing that “Nissan has union representation at 42 out of its 45 plants around the world. The American South should not be treated differently.”

On Thursday, the senator ripped into Nissan for “doing everything it can to stop these workers from forming a union,” in what Sanders suggested “could go down as one of the most vicious, and illegal, anti-union crusades in decades.” He added that “workers should never have to endure this type of threatening campaign or walk through a minefield just to vote for a union.”

Whatever the results this week, Sanders writes in a new essay that

I proudly support Nissan workers’ fight to form a union. What they are doing takes tremendous courage. If they succeed in forming a union it will not only improve their wages and working conditions, but will benefit workers across the south and all across this country. But regardless of what happens this week, Nissan workers should be very proud. They have exposed the system of racial and economic injustice that corporations like Nissan are perpetrating. We need to build on their courageous efforts, and fight for an economy that works for all of us, not just the top one percent.

The fight that Sanders regularly evokes in interviews and speeches continues.