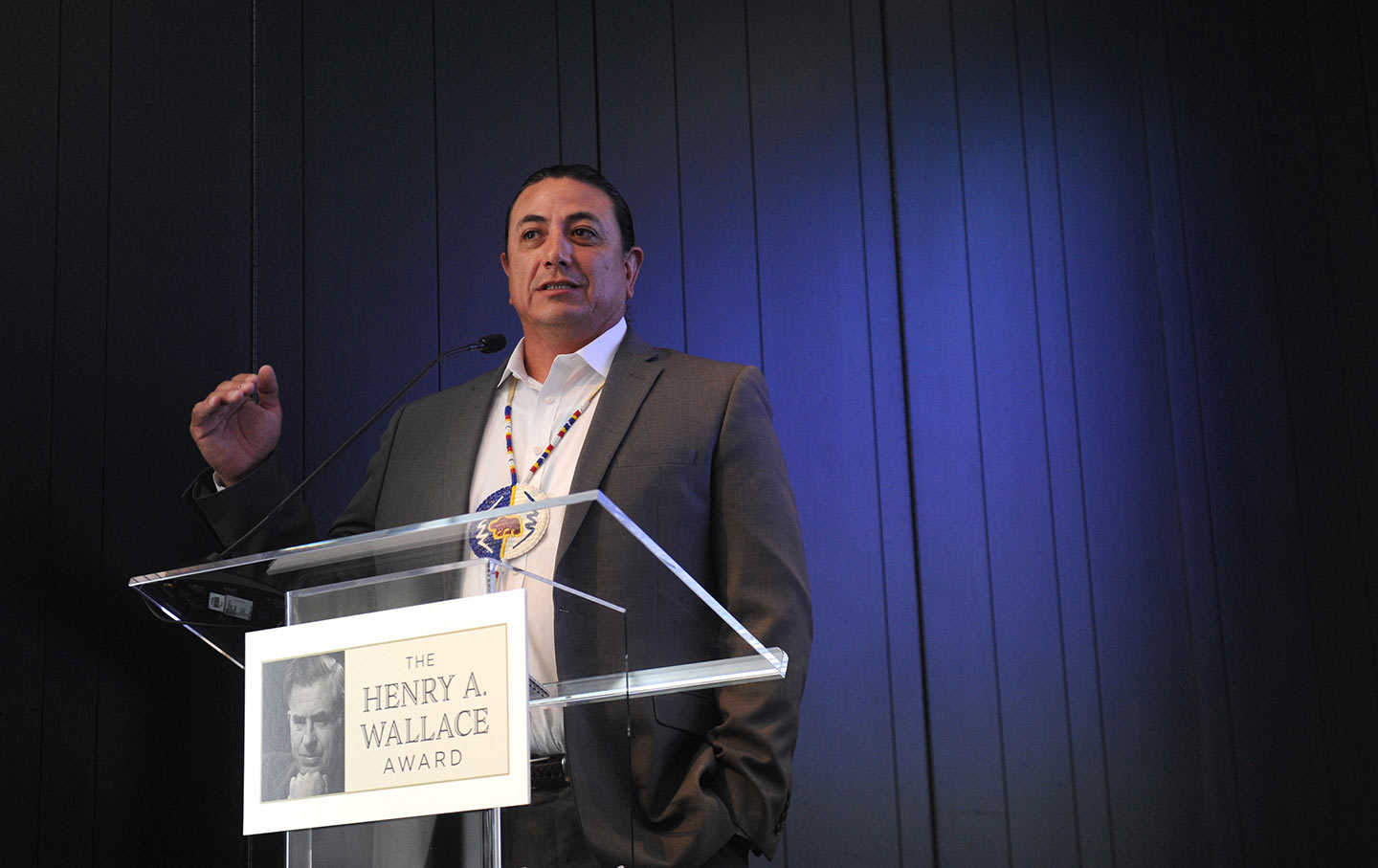 For many Americans, the protests at Standing Rock were an isolated event—one indigenous community, on one swath of land in South Dakota, fighting for environmental justice.

Yet, as Sioux Tribal Chairman David Archambault II stood to accept the inaugural Henry A. Wallace Award in a second-floor conference room of the Andaz Hotel in midtown Manhattan on June 8, it became painfully clear that, for many Native Americans, this is a much larger and longer battle.

“It’s not an accident that indigenous communities are at the center of this conversation,” said Nick Tilsen, founding executive director of the Pine Ridge Reservation Thunder Valley Community Development Corporation. “The injustice we see at Standing Rock has happened to every single one of our communities at one point in time.”

The Fight Against the Dakota Access Pipeline Is Not Over. Here’s How You Can Join

Presented by the Wallace Global Fund, the Henry A. Wallace Award grants the Standing Rock Sioux Tribe $250,000 for their “unyielding courage” as common men and women standing up “against the oppressive combination of corporate and governmental power,” said Scott Wallace, co-chair of the fund.

The fund also pledged an investment of up to $1 million toward the tribe’s ongoing “100 percent” transition away from fossil fuels.

That shift toward clean energy, which Archambault says began about a decade ago, involves change on the individual, community, and commercial levels. In addition to helping all seven Sioux reservations sell clean wind and solar power to out-of-state buyers, the tribe’s goals include increasing their energy independence, developing models for other tribes, and creating work and educational opportunities in the renewable-energy sector for members of the tribe.

So far that’s meant selecting a site for the construction of a utility-scale wind-power generation and transmission system that would at least double South Dakota’s installed wind-power capacity and increase the nation’s total generated wind power by up to 3 percent. There are also plans to fit at least five Sitting Bull College buildings with solar electric systems, in addition to a wind-energy turbine built in 2011 that currently helps power Sitting Bull College’s science-and-technology and transit centers.

“There’s a lot of awareness that has to be built, so our plans are to build…[the] capacity for members of our tribe to understand renewable projects, green energy, and self-sustainability,” Archambault told The Nation.

During the ceremony, indigenous leaders also acknowledged that while demonstrations on the ground at Standing Rock had ceased, many protesters are still facing charges. There is also the tribe’s ongoing lawsuit against the US Army Corps of Engineers to prevent the construction of the Lake Oahe easement and protect the tribe’s water supplies.

“This is not over,” Archambault said. “We continue to fight the pipeline in court and await a decision that adequately reflects the rule of law established in this country—one so often flouted by this administration.”

As Standing Rock’s resistance shifts from the hills of the Dakotas to the courts of DC, both Archambault and Tilsen reaffirmed that nonviolent demonstrations over the broader issue of environmental justice would not wane.

“I think one thing that happened at Standing Rock is that nonviolent direct action and civil disobedience became a household name in Indian country. It wasn’t before,” Tilsen said. “[We’re] looking at deploying the same strategies that were used to stop the pipeline in Standing Rock, but doing that at the source. It’s one thing to have a pipeline, but we can go into the tar sands and we can go into the [Bakken shale formation].”

Archambault also confirmed that the Sioux are open to working with any tribes that reach out and that, despite having already marched on Washington twice, they would be willing to march again if it fits with the tribe’s goals.

On June 14, almost a week after the Wallace Fund’s recognition of the Sioux’s clean-energy efforts, a federal judge ordered the Army Corps of Engineers to “reconsider” its environmental review of the Dakota Access Pipeline. The 91-page decision stated that federal permits issued for the pipeline failed to consider oil-spill effects “on fishing rights, hunting rights, or environmental justice,” and thus violated the law.

Plans for the original review were announced just two days before Donald Trump’s inauguration and would have offered alternative routes for the final section of the 1,172-mile-long pipeline. They were effectively discarded just four days into Trump’s presidency, when he signed an executive order expediting “procedures and deadlines for completion of environmental reviews and approvals” necessary to finish the highly controversial cross-country project.

Two weeks after the executive order, Archambault was on his way to Washington to meet with William Kirkland,  the White House deputy director of intergovernmental affairs, when he received notice that the Army Corps of Engineers had terminated the environmental-review process and would issue a permit for the highly contested Lake Oahe easement. Archambault canceled his meeting, which the administration had pushed back after originally scheduling it for earlier in the week.

The Dakota Access Pipeline has already leaked three times since March, even before it was fully operational. When oil began flowing through the finished pipeline on June 1, there was still no oil-spill response plan in place for the section that crosses the Missouri River near the Standing Rock Reservation. According to Archambault, the Sioux have been excluded from the process of creating any such plan, despite the fact that portions of the pipeline run “just 500 feet” from the Standing Rock Reservation.

The parties in the Sioux lawsuit are expected to meet with the judge this week, and the Army Corps of Engineers is likely to argue that the pipeline doesn’t need to be shut down in order to complete the environmental review. But if the events of the past week are any indication, this fight—like the larger battle for indigenous and environmental rights—is far from over.