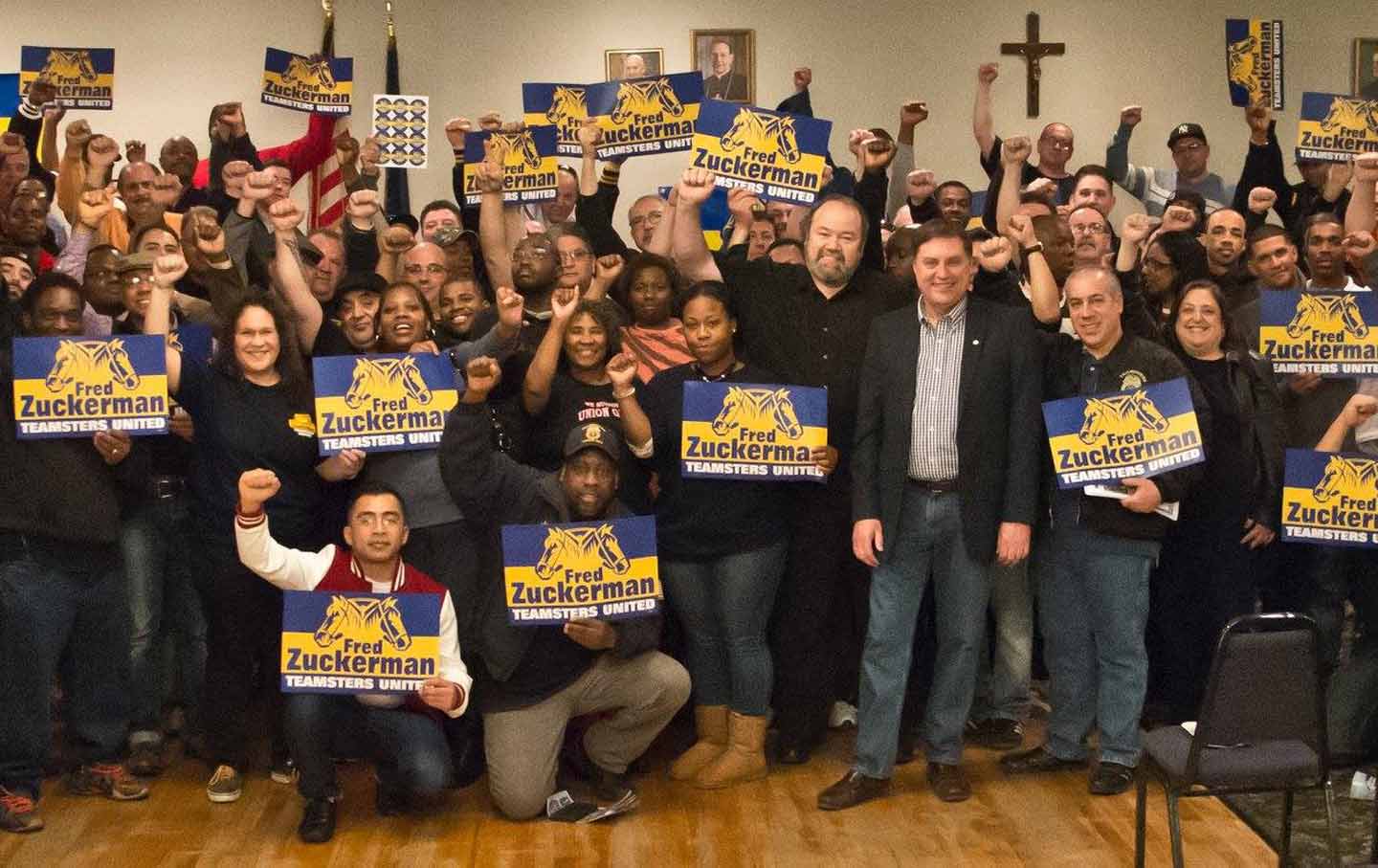 A few weeks ago, a major election was held in the United States, where working-class whites, in alliance with black and Latino voters, rallied around a progressive populist platform—and won. No, this is neither revisionist history nor some kind of collective blue-state fantasy, in which the Electoral College has been abolished and the popular vote prevailed. Rather, it concerns the largely ignored national election of the International Brotherhood of Teamsters—one of the nation’s largest industrial unions—which in many ways serves as a microcosm of our political environment, and may provide lessons for Democrats as they move forward. Prime among them are that before the Democratic Party abandons populism or gives up on working-class whites as unwinnable, it would do well to look to look at how Teamsters have been able to win Rust Belt voters with a campaign that should be familiar to Democrats.

The Teamsters union has almost 1.3 million members in both the United States and Canada. Between November 14 and 17, just a week after Hillary Clinton lost to Donald Trump, the union was busy counting the ballots for its own election. When the US numbers had been tallied, it became clear that Fred Zuckerman and the Teamsters United had eked out a narrow victory among this country’s members. Progressive populists had gained more votes than Jimmy Hoffa Jr. and his establishment slate. Unfortunately, the Canadian members voted overwhelmingly for Hoffa’s slate, ultimately pushing them into the winner’s position for the union as a whole (Teamsters United have little presence in Canada). Nonetheless, Teamsters United’s US victory offers valuable lessons for despondent Democrats and progressives.

The narrative that most have settled on for why Hillary Clinton lost the election was that working-class whites abandoned her and the Democratic Party for a reactionary populist message. But Ken Paff, a former truck driver from Cleveland, now an organizer for Teamsters for a Democratic Union in Detroit, explains, “The same people lost to Democrats and won over by Trump were won by our movement. But where Trump benefited from blue collar desertion, we were the beneficiary of blue collar militancy.” By campaigning on a progressive populist platform that centered on fighting for workers’ rights, stronger health and pension benefits, and inclusion and diversity, the insurgent group of Teamsters was able to win in the United States.

“The same people lost to Democrats and won over by Trump were won by our movement.” —Ken Paff, organizer for TDU

The Teamsters may seem a peculiar place to look to learn lessons about democracy. They have a long and deep history of corruption, which, as late as 1988, was described in a federal racketeering suit as a “devil’s pact” with organized crime. Indeed, the name Jimmy Hoffa (the elder) evokes images of the heavy-handed, above-the-law union bosses decried by so many. But whereas the Teamsters have at times shown the worst of labor, they have also shown the best of labor.

Starting in the 1970s with a dissident group of Teamsters under the banner Teamsters for a Decent Contract, later becoming Teamsters for a Democratic Union (TDU), the Teamsters took back their union from leadership that regularly raided the pension funds for personal gain and mob investment, colluded with the employers they were supposed to be bargaining against, and engaged in self-destructive thuggishness.

The first major step in the process was to fight for free and fair elections. For most of the history of the union, leaders were elected in conventions where only delegates could vote. TDU advocated that elections must be given back to the members, with one member one vote. In 1988, with the federal government engaged in a massive racketeering case against the Teamsters, they had their chance to give effect to this idea. Paff, on behalf of TDU, wrote to then–US Attorney General Edwin Meese and argued that the only effective anti-corruption measure that the government could impose was “to direct the [Teamsters] to hold rank-and-file elections.”

The 1989 federal consent decree required that the Teamsters amend their constitution to provide that national officers “shall be elected by direct rank-and-file voting by secret ballot in union-wide, one-member, one-vote elections.” Given the ability to appeal directly to members in a fair election, the TDU could finally make its platform heard: its appeal to democratic governance, its calls for an end to race and sex discrimination, and its demands to clean up Teamster leadership. The same candidate who won only 1 percent of the vote running against the president in 1986 under the old election rules was elected to the post of vice president in 1991.

In 1991, the Teamsters for a Democratic Union won control of the union. They were able to turn the union around to some degree by growing the union, as well as leading the massive and successful 1997 UPS strike, which involved some 185,000 workers. Historian Nelson Lichtenstein told Steven Greenhouse at The New York Times that the UPS strike “ends the Patco syndrome,” referring to Ronald Reagan’s firing of the striking Patco workers, “a 16-year period in which a strike was synonymous with defeat and demoralization.”

In 1996, there was a Teamster “counter-revolution,” where Jimmy Hoffa Jr. and many of the old guard sought revenge on TDU, and almost won. The Hoffa slogan in this campaign was “Restore the Power,” which is eerily similar to Trump’s “Make America Great Again.” Hoffa eventually won in 1998, and has retained control since. During their time outside of power, TDU remained as a sort of watchdog, but was unable to win elections.

In 2015, the TDU joined with others within the Teamsters who were unhappy with the direction of the union to form Teamsters United. Armed with a history of fighting against corruption, for transparency, and for a more militant union, Teamsters United mounted a campaign against the entrenched Jimmy Hoffa Jr. Perhaps unsurprisingly, the campaign had an anti-establishment populist bent. But it was not the populism of Donald Trump, with its xenophobic appeal coming from the embodiment of anti-worker billionarism. The Teamster United platform had three central prongs: an anti-corporate approach to organizing and negotiating, an anti-establishment approach to union and political leadership, and inclusion of all groups of Teamsters.

The platform was anti-corporate in its resistance to the contract givebacks that have become more prevalent as companies have demanded cuts in wages and benefits. It was anti-establishment in its concerted critique of President Hoffa and other high-level union leadership, their fat salaries, and the practice of using union funds to donate to the campaigns of politicians who do little to protect teamster interests. And it was inclusive by creating real, issue-based alliances between the mostly white, male, full-time drivers and the low-wage, part-time workers, many of whom are black, Latino, or immigrant.

The Teamsters United slate represented this diversity. Dave Loobie, a Trinidadian part-timer from Brooklyn who ran on this slate, did not hesitate to call the union an “old white boys club.” But as he campaigned outside company gates and inside parking lots throughout the Midwest, South and Northeast (with the Teamsters, a lot happens in parking lots and at gates), he was able to rally other part-time workers to participate in the union and was able to organize workers around the issues common to them all.

When I asked these Teamster officials why their progressive populist message was well-received among many of the same workers that abandoned Clinton for Trump, the most common answer was that it was all about history and credibility. Paff, who has been a leader among dissident Teamsters for over 40 years, explained that “you can’t show up on an issue during an election campaign. We had a track record of fighting for pensions, against corporate givebacks, and corruption for years.”

When I asked what’s next for Teamsters United after they won in the United States, only to be followed by a large enough loss in Canada to lead to an overall loss, they were oddly optimistic. They pointed to the six vice-president positions they won, and how these can serve as watchdogs calling out Hoffa and his people every time there is a whiff of corruption, back-room dealing, corporate giveaways, or anything that is not in the members’ best interests. The vice presidents representing Teamsters United are in the minority, and can always be voted down, but in their positions they have a voice to raise important issues. And, as Paff, who has been fighting this fight as long as anyone explained, “With the right to vote, a commitment to fighting for workers, and a means for calling out those in power, we’ll win next time.” Democrats would be wise to follow suit.