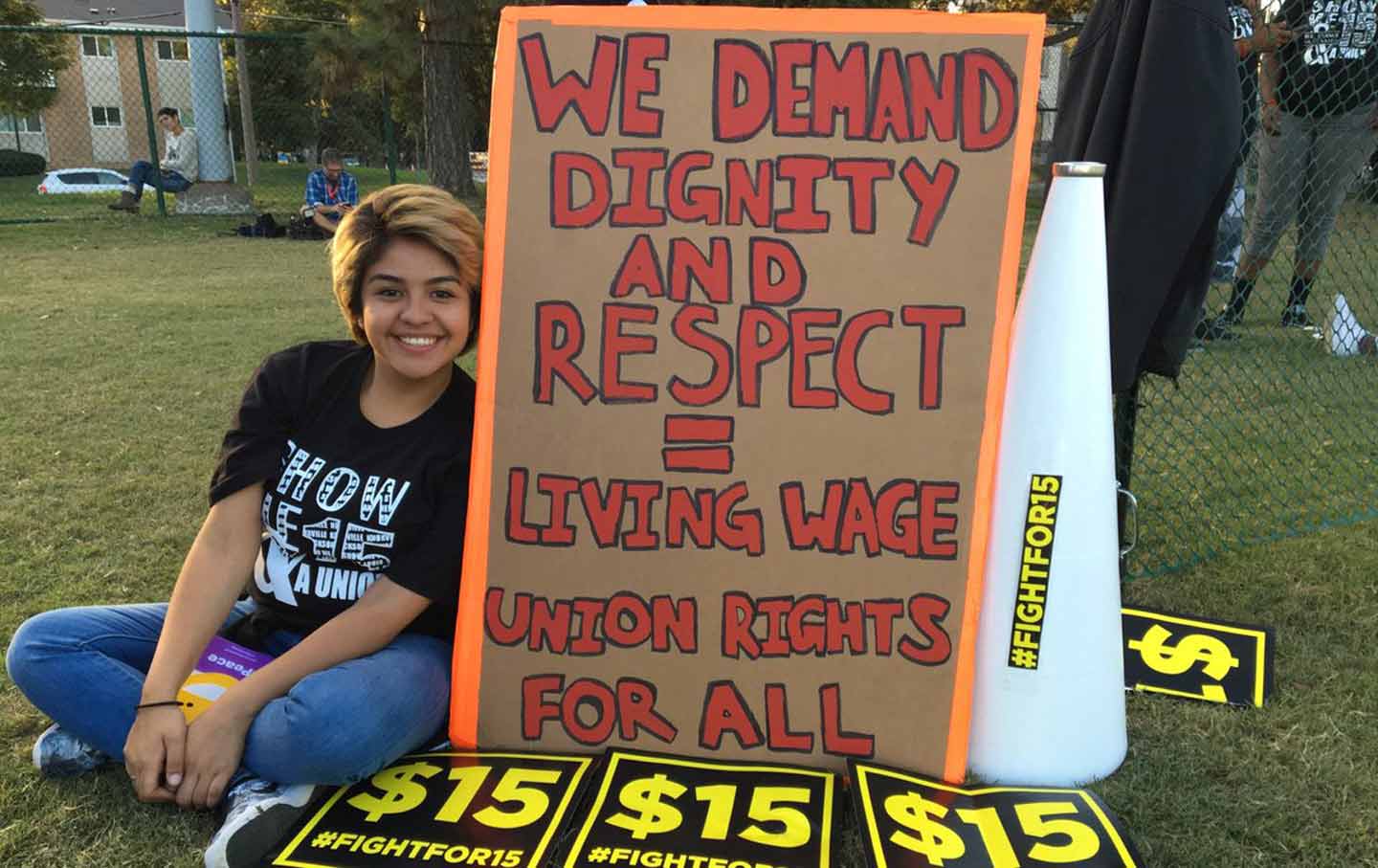 In late November, three weeks after the election, 21-year-old Anggie Godoy “took arrest” outside of the Downtown Los Angeles McDonald’s, where she has worked for the past three years.1

Godoy was one of thousands of low-wage workers around the country who participated in a National Day of Disruption to demand higher wages and highlight the deeply insecure conditions faced by immigrant workers, many of whom are undocumented. Workers blockaded entrances to fast food restaurants and retail outlets in Las Vegas, Minneapolis, New York, and more than 300 other cities, as well as demonstrating in front of dozens of airport terminals nationally. More than 100 were arrested and issued citations for refusing police orders to disburse.2

In Los Angeles, roughly 400 people blocked the street between a downtown McDonald’s and an American Apparel outlet. “Hey McDonald’s, we’re still here,” the strikers, many of them either undocumented or related to immigrants lacking legal paperwork, chanted. Then, in direct response to Trump’s election and his promises to deport millions of people from the country, they continued: “We refuse to live in fear!” Finally, they sat down, and, while they waited to be arrested, chanted, “The people, united, will never be defeated!”3

A few days later, Godoy reflected on why she was willing to be arrested. “It’s to prove your point that you’re going to do whatever it takes to get $15 an hour,” she said while sitting at a table outside of a Starbucks on the corner of Union and Wilshire, down the road from the apartment she lives in with her mother and two younger siblings. “It was a lot of emotions all at once. I was scared. I’ve never been arrested.”4

For Godoy, who, with her shoulder-length brown hair streaked with purple highlights, looked younger than her twenty-one years, the arrest symbolized her increasing radicalization—a move into politics catalyzed over the past few years by her friendship with local Fight for $15 organizers, and made more urgent by her mother’s undocumented status. Godoy first applied to work at McDonald’s when she was still in high school, hoping the money would help her family stay afloat. She earned $8 an hour at first, and quickly realized that those dollars didn’t go anywhere near far enough to supplement the earnings that her mother—an undocumented immigrant from Guatemala—was able to bring in through a series of casual, non-benefited jobs.5

After Godoy graduated from high school in 2015, she began studying for a political science degree at Los Angeles Trade Technical College, where she remains a student today. She continues to work at McDonald’s simply to make a dent in her bills.6

When Fight for $15 organizers approached her at her workplace in 2014, a light went off. Fight for $15 began in New York City in late 2012 when 200 fast-food workers walked out of their jobs to demand $15 an hour and union rights. The union-backed campaign quickly spread to other industries and other cities. Organizers like the ones who approached Godoy emphasize how collective action can make change. “I realized it was many homes, many people affected by the minimum wage and conditions of work,” Godoy said of learning about the campaign. From that point on, she threw herself into the fight for the living wage, viewing it as one of the more effective ways to improve the conditions of families such as hers. It was, she immediately saw, a continuation of struggles she had participated in growing up.7

Throughout her childhood, Godoy recalled, her mother had taught her to fear la migra—the raids that were so routine in her part of Los Angeles. During the George W. Bush years, immigration officials conducted aggressive workplace raids around the country, resulting in thousands of deportations. For Godoy, it seemed like every week someone was arrested or deported. Like her mother, most of these migrants worked in low-wage, non-benefited, jobs. From the age of 10, Godoy attended pro-immigrant rallies in Los Angeles, protesting in MacArthur Park and in Koreatown. When she began working at McDonald’s, the then-teenager immediately began making political connections between wage exploitation and the treatment of immigrants. The Fight for $15 movement, she argues today, “brings people together. We have unity.”8

Godoy started participating in strike actions in 2014, and has, in recent years, become an in-demand speaker at political events throughout California. In 2015, she spoke at a huge May Day rally in downtown Los Angeles. She has also spoken at City Council meetings. “Some people try to talk me out of it,” she admits, acknowledging that many people believe it’s safer to keep one’s head down than to speak out. “But I’m a little hard-headed. It’s bigger than one person.”9

In April of 2015, immediately after one of the fast food strikes ended, Anggie Godoy was one of 15 women who fasted for 15 days to push the LA City Council to adopt a $15 minimum wage. They camped out in a huge tent out in front of City Hall, visited by union supporters, clearly, and other sympathizers from the community. They drank water and took electrolytes, but other than that ingested no sustenance. “It was super-cold,” Godoy recalls. “Downtown is a wind tunnel. We’d freeze the whole time.”10

Just two months later, the women scored a huge victory when LA Mayor Eric Garcetti and the City Council came out in favor of their wage demands, followed soon afterwards by the Board of Supervisors of the county of Los Angeles.  On June 13, Mayor Garcetti signed a law that would gradually raise the citywide minimum wage to $15 an hour by 2020.11

Since 2012, when Fight for $15 took off, organizers estimate they have managed to win pay increases for low-wage workers around the United States that total nearly $62 billion. By any measure, it’s been one of the most successful economic-justice movements of recent decades. And while many progressives huddle in despair, pondering what comes next in a Trump-run country, Fight for $15 is feeling buoyant. Reveling in a series of minimum wage increases won in cities from LA, San Francisco, and Seattle to New York, and in states from California to Maryland, the movement is looking to build coalitions with environmental-justice organizations, anti–police brutality groups, LGBTQ groups, and a host of other progressive movements. Anggie Godoy regularly talks with local environmental groups about the importance of fair-wage fights around the country, as well as the need for alliance building; she has also been active with the city’s Brown Berets, a group of Latino activists working on immigration issues.12

Whatever Trump and the GOP try to do at a federal level, Godoy argues, Fight for $15 is a social force that won’t be extinguished. “We’re only going to push more. We’re not going to be bullied anymore. We’ve been bullied for so long. It’s got to stop,” she says. Trump “can say so many things, but at the end of the day you have so many people backing you up. We’re going to continue doing what we have to do. Fight for $15 isn’t going anywhere. We’re going to continue fighting.”13