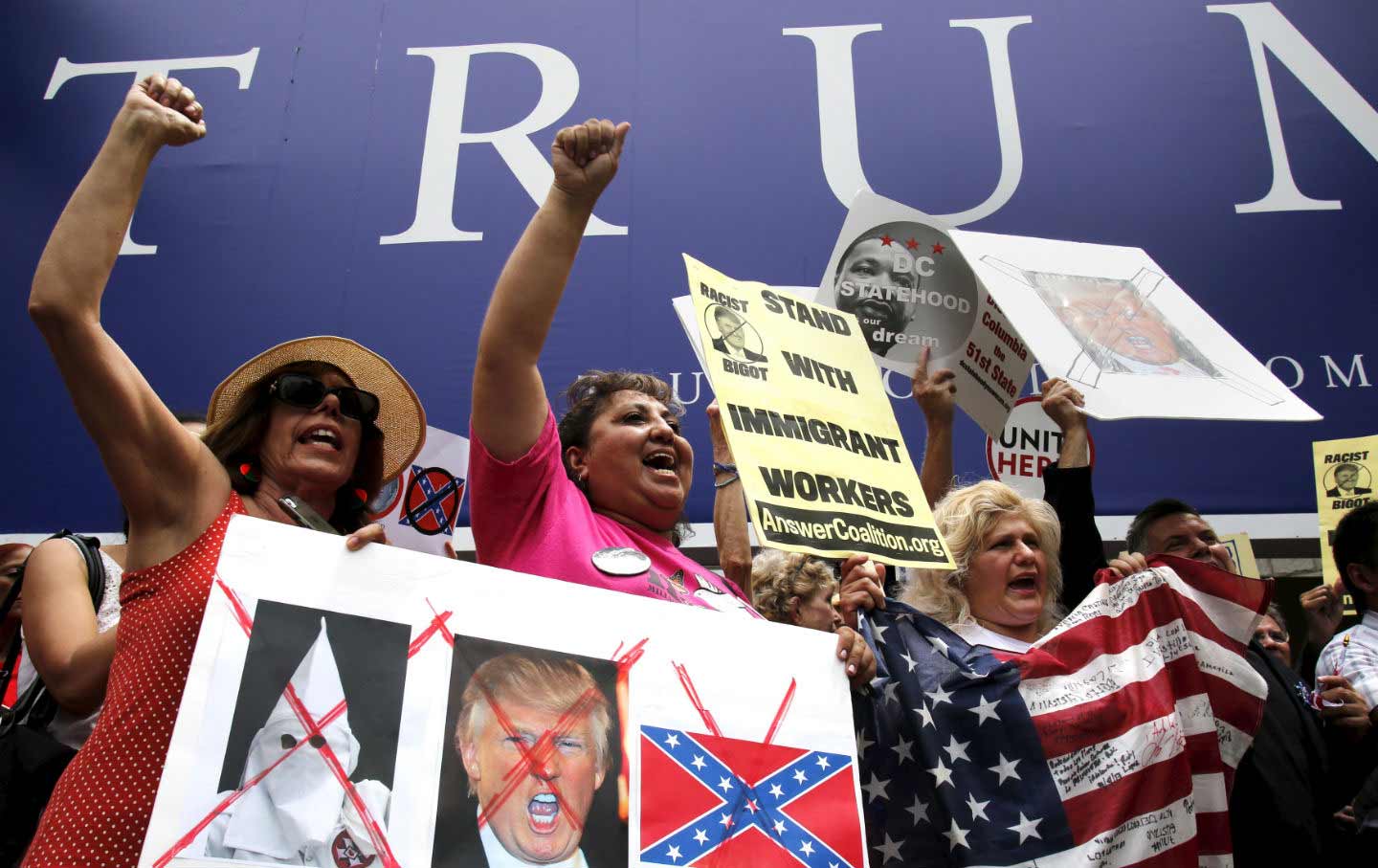 Protesters call for businesses to sever their relationships with Donald Trump as they demonstrate outside the site of a new hotel owned by Trump. (Reuters / Yuri Gripas)

In Lysistrata, the women of Athens give up sex to end a war. There is a version of this story that would see this as little sacrifice on women’s part. The enjoyment of sex, we’re so often told, was a male province until very recently. Aristophanes knew otherwise. His Athenian women were just as lustful as the men. When Lysistrata tells everyone her plan, after all, she’s hardly finished before she has to yell, “Why are you turning away from me? Where are you going? Why are you all pursing your lips and shaking your heads?”

I thought of that scene when fault lines quickly appeared between the women looking to organize a large-scale demonstration among Donald Trump on January 21. At first, the dispute was over taxonomy: The first name for it was the Million Women March, but there had already been a Million Woman March of women of color in Philadelphia in 1997. That problem was quickly dispensed of: The thing was rechristened the Women’s March on Washington. But then there were squabbles over the homogeneity of the leadership of the march. That, too, was quickly taken care of: There are now three women of color who are co-chairing the event with other organizers. In the meantime, though, some small amount of damage was done.

That women don’t instantly align with one another should not be surprising. If the election taught us nothing else, it was that “women” don’t have a prima facie claim on one anothers’ loyalties. Whatever the strengths and failures and, well, active sabotage waged against her campaign, Hillary Clinton did not get the majority of the votes of white women. She commanded over 90 percent of black women, but that statistic served only to exacerbate the sense that women were not in anything together. In fact, women should already know that their “solidarity” is a fragile thing: History and experience have given us reason enough to know it.

The earliest women’s protests happened spontaneously before there was a reason to even call political action “organizing.” For example, we do not know exactly how what the English historian Thomas Carlyle called the “Insurrection of Women” got started in Paris, France, on October 5, 1789. We know that a man named Stanislas-Marie Maillard marched in front of the women and called himself the march’s leader. We also know that Louis-Philippe Joseph, the scheming Duke of Orléans, was suspected of being behind several popular protests of 1789. But some historians believe he headed a spontaneous procession, seven thousand Parisian women marching on the elaborate Versailles palace because they had no bread to feed their children.

“Men know not what the pantry is, when it grows empty; only house-mothers know,” Carlyle wrote of the Versailles marchers. He was accidentally making a key distinction, there: Even back in pre-revolutionary France, there was a line to be drawn between “all women” and “house-mothers.” In bringing their complaints to Versailles the women were, in some sense, going up against another woman: Marie Antoinette, her excesses a scapegoat for every bad thing the ancien régime stood for. No one would have mistaken the queen’s interests for those of her subjects.

What solidarity there historically was for protesting women, then, was based in homemaking and child-rearing. This phenomenon of the food riot does come up again and again, in world history. The foodstuffs in short supply change through the ages: In Virginia, during the Civil War, it was meat the women were after, eventually stealing 500 pounds of bacon. In Russia, during World War I, it was a shortage of sugar that set off a riot. Through time, and across the world, though, it’s often the women who lead the charge: In Nigeria, in the 1920s, it was the potential taxation of the market women that sparked a heroic—and successful—revolt against the colonial authorities known as the Women’s War.

In the America of 2017, the lines of femininity are not so clear cut. From the perspective of the left, the main points of alliance are on questions like pay equity and reproductive rights. Important as those may be, they lack the primal appeal of food in the bellies of starving children. They also dissolve into thin air across partisan lines. Resistance to Trump, as a goal, has the potential to finally get American women out of the holding pattern the divided opinions of Americans.

There is hope for that: Women have more often won out by arguing with each other than they like to remember. Among themselves, for example, the suffragettes agreed on very little. Their Carrie Chapman Catt was an institutionalist, wanting to work within established lines. Alice Paul was a shit disturber, wanting to hold demonstrations like the ones she’d observed in England. Frances E. Willard, the head of the Women’s Christian Temperance Union, clashed repeatedly with Ida B. Wells, who pointed a finger at the racist appeals Willard frequently made in the name of arguing for women’s suffrage.

That fractious history can be traced right down through the 1970s. We remember the second-wave feminists as a monolith now, but they did not feel that way about themselves. When Jo Freeman wrote a well-regarded essay on “trashing” in the movement, she also admitted that disagreement, conflict, and opposition “are perfectly ordinary phenomena which, when engaged in mutually, honestly, and not excessively, are necessary to keep an organism or organization healthy and active.” When Audre Lorde wrote a letter to Mary Daly arguing that her tract Gyn/Ecology did not include any women of color, Lorde implored Daly, “This dismissal stands as a real block to communication between us. This block makes it far easier to turn away from you completely than to attempt to understand the thinking behind your choices.

In other words, these arguments about representation, tactics, and rhetoric that we see in our own time have a long history of their own. If we knew the history of these movements a little better than we do, we might know that. The occasional Hollywood film or popular book has not quite managed to surface the way that women’s protests have always been fragile and fractious alliances. But perhaps the march on January 21 will serve to remind us that, all disagreement aside, there is something to marching together that exceeds all of our many, reasonable disagreements.