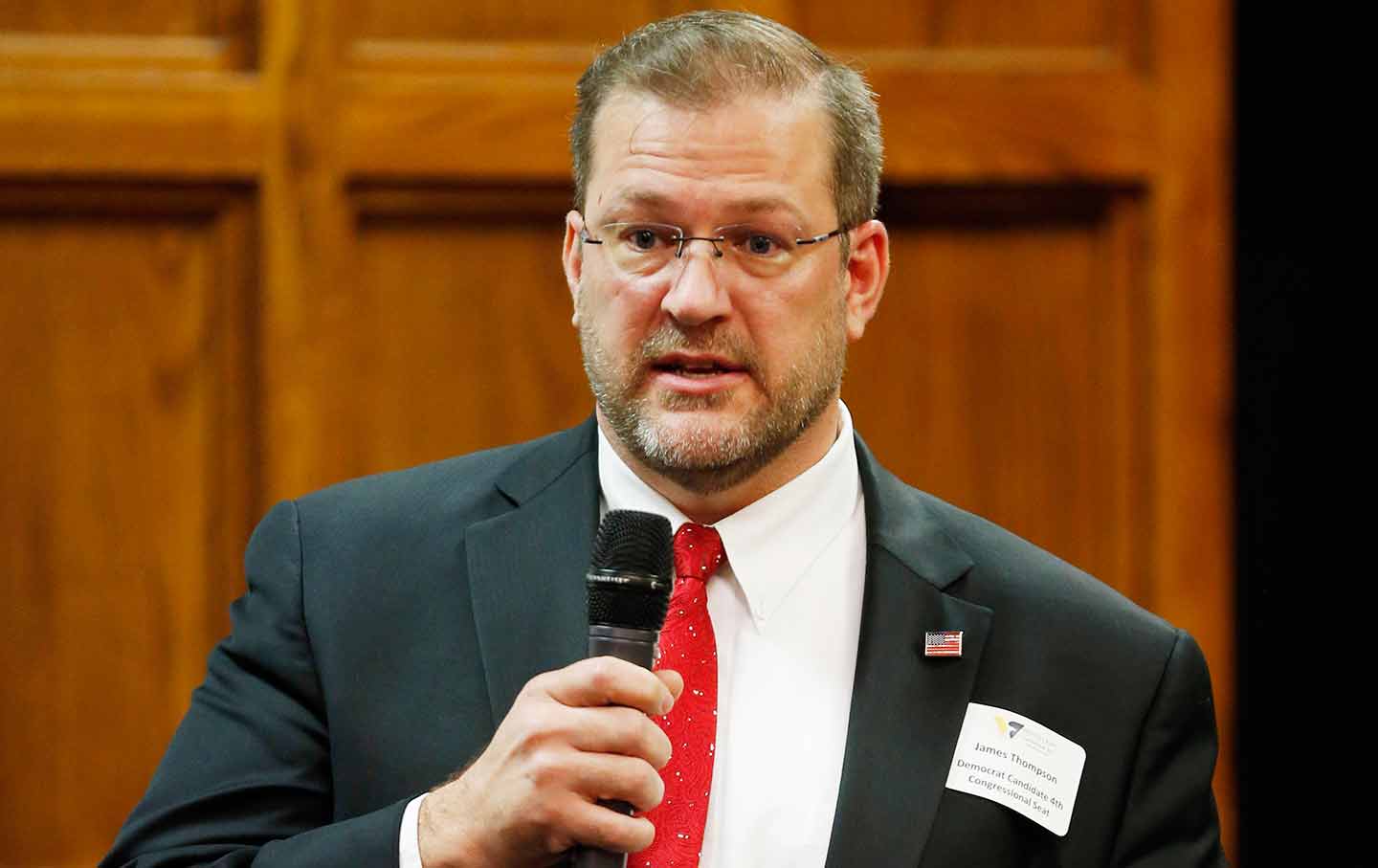 “I’m totally new to politics—I was inspired to run by Bernie. After the election, I decided to get out from behind my Facebook keyboard and try to make a difference, so I decided to run for office,” says James Thompson, a Kansas civil-rights attorney whose Bernie Sanders–style bid for an open Kansas House seat has spooked Republicans in Washington.

As Tuesday’s special-election vote approached, the National Republican Congressional Committee poured money into a last-minute media blitz to prevent Thompson from taking the seat vacated by Donald Trump’s CIA director, former congressman Mike Pompeo. House Speaker Paul Ryan even issued a “personal request” that donors open their checkbooks for the Republican candidate, Ron Estes, in “one of the most important House races in the country.”

Mike Pompeo was known as the “Koch Brothers’ Congressman” and “the congressman from Koch” because of his steady subservience to the right-wing agenda of billionaire campaign donors Charles and David Koch. Koch Industries is headquartered in Wichita, the largest city in the Fourth Congressional District that Thompson hopes to grab from the Republicans—and their wealthy patrons.

Thompson is running a campaign that proudly embraces the “not the billionaires” ethic of Sanders’s 2016 presidential bid. Raised in poverty—he quit high school to support his family at a time when they were living in a van—Thompson says he is running to preserve public education, health-care protections, and the social safety net that helped him make it from the streets to law school, and that Koch-backed candidates propose to shred.

“It’s in the first sentence of the Constitution—promote the general welfare,” says Thompson. “We must provide a certain level of safety for everybody… make sure it’s accessible.”

“I was inspired to run by Bernie.”—Kansas congressional candidate James Thompson

That’s not a message that billionaires and their networks of Republican campaign donors embrace. As The Topeka Capital-Journal reported last week, big money is being spent to save Estes, the Republican who wants to be the next “congressman from Koch.” “Among the political action committees contributing more than $93,000 to Estes’ campaign are groups tied to Koch Industries and to various conservative political organizations,” noted the paper. “Also funneling money into his campaign were the political action committees for industry groups such as the American Bankers Association, National Association of Home Builders, National Business Aviation Association, and National Cattlemen’s Beef Association, among others.”

In contrast, Thompson is following the Sanders campaign model of relying on small donations. More than 95 percent of the Democrat’s donations come from individuals, and he has gotten little help from DC Democrats who have not, for the most part, taken the Kansas contest seriously. Mimicking the Sanders campaign in 2016, the Thompson average donation is $25, and his campaign says the money’s coming mostly from Kansas.

Estes has all the advantages: He’s the elected state treasurer of Kansas, he’s a career politician with strong ties to special-interest groups in Kansas and Washington, and he’s a Republican running in a district that has sent Republicans to Congress for decades. His wife, Susan, is a longtime Republican operative who until last year was the Kansas-based field director for the Koch brothers–backed Americans for Prosperity.

But Thompson has mounted a muscular campaign that emphasizes his military service, his gun ownership, his economic populism, and his respect for immigrants, civil rights, and women’s rights. While Estes, a Trump elector last year, defends the president and unpopular Kansas Republican Governor Sam Brownback, Thompson calls the special election “a referendum on Trump’s policies and Brownback’s policies.” That full-spectrum opposition to right-wing policies at the national and state levels reflects the understanding of progressives who argue that conservative donors have put their stamp on every level of politics.

“It is not just our district or state that needs to be concerned about this election. This election is literally about a man who wants to take the failed policies of the Brownback administration and nationalize them,” says Thompson. “We have shown why trickle-down economics don’t work, we have shown his policies have failed. They have been disastrous for our state.”

Sanders reinforced that message when he came to Kansas in February and addressed 1,500 Kansas Democrats and their allies. The senator described Kansas as “ground zero for trickle-down economics.” He also told Kansans that, despite the odds in what has been an overwhelmingly Republican state in recent years, “We can defeat the Trump agenda. We can create a progressive America if millions of people stand up and fight back.”

Thompson, who introduced Sanders at the February gathering, wears his endorsement from Our Revolution, the group Sanders backers formed last year, as a badge of honor. Along with a growing number of first-time candidates this year, he says: “Bernie Sanders’ message spoke to me. He talked about progressive values. He talked about health care for all. He talked about returning the working class to prominence in this country.”

Thompson is running an uphill race in 2017. But like Sanders in 2016, he has gained traction by proposing a new politics that’s “good for everyone instead of just the rich and powerful.”