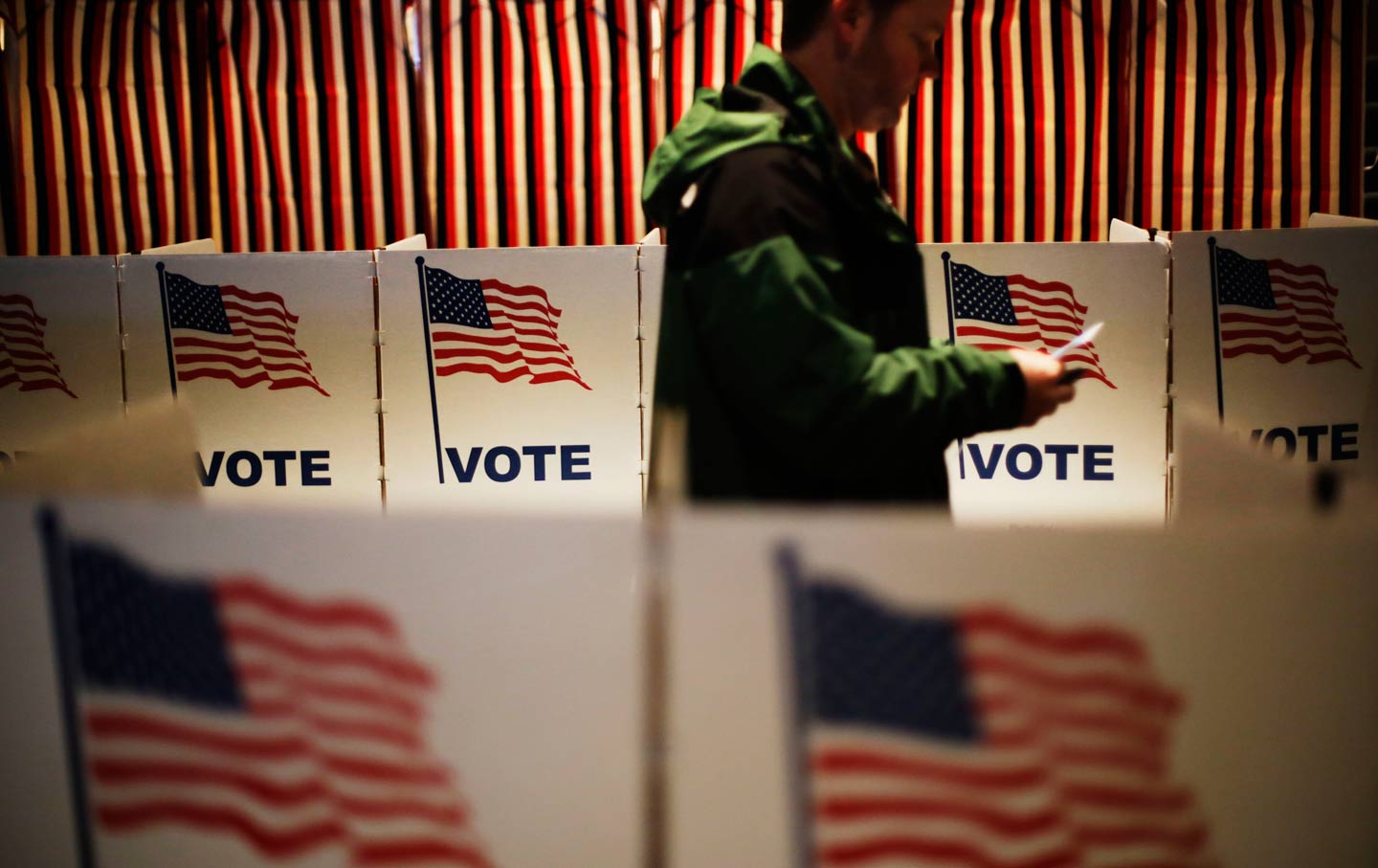 A voter in Nashua walks over to cast a ballot at a polling site in the New Hampshire primary. (AP Photo / David Goldman)

Concord, New Hampshire—The votes are already being counted, and we have an indication of what New Hampshire’s first-in-the-nation primary voters are telling the Democratic and Republican parties. Vermont Senator Bernie Sanders is leading by almost 2-1 with Democrats. Ohio Governor John Kasich, Texas Senator Ted Cruz, and billionaire Donald Trump are in a Republican tie.

The announcement of the results from Dixville Notch, Hart’s Location, and Millsfield were broadcast live—nationwide and around the world.

But they provided only a (very small) snapshot—not the full picture.

The tiny towns that start the New Hampshire primary voting cast only 65 votes in the minutes after midnight. On the Republican side, they gave Kasich 9 of those votes, Cruz got 9, Trump 9, New Jersey Governor Chris Christie 3, Florida Senator Marco Rubio 2, former Florida governor Jeb Bush 2. One each went to Dr. Ben Carson, former CEO Carly Fiorina and Kentucky Senator Rand Paul (who has suspended his campaign).

On the Democratic side, Sanders had 17 and Clinton had 9.

OK, so not a lot of votes. But, surely, we can extrapolate from that. Right? Minutes after it was announced that he had swept Dixville Notch, where he actually held a “town-hall meeting” with a handful of voters, Kasich tweeted, “Early momentum as @JohnKasich wins GOP vote in Dixville Notch! Let’s keep it going, New Hampshire.” Sanders tweeted, “Honored to have the unanimous support of the people of Dixville Notch.”

But Sanders, who appeared with Larry David on last week’s NBC’s Saturday Night Live, might want to curb his enthusiasm. Eight years ago, Barack Obama swept the voting in Dixville Notch, and his supporters saw confirmation that their poll leader in the run up to the the 2008 New Hampshire primary would easily defeat Hillary Clinton. Twenty-two hours later, Clinton was celebrating a solid win in New Hampshire that would renew her candidacy.

But wait! Though Clinton won the primary, Obama won as many delegates as Clinton and eventually collected a majority of the state’s delegates—as supporters of third-place finisher John Edwards moved his way.

What happened in 2008 is instructive. In this age of instant communication and impassioned commentary, there will be plenty of attempts to spin New Hampshire results as they come in—and as they are finally tabulated. Here are some tips for assessing the numbers tonight:

1. New Hampshire is not conclusive.

For both parties, it is vital to remember that New Hampshire is an overwhelmingly white state and an overwhelmingly secular state. That means that it does not precisely reflect the core constituencies of the Democratic or the Republican parties. And results from New Hampshire must be placed in that perspective. This is a pivot point in the process, not the end of it.

Both the Democratic and Republican primaries will produce winners. That matters. Twenty years ago, Buchanan beat Kansas Senator Bob Dole by just 1 percent in the New Hampshire Republican primary, but the headlines hailed the Buchanan victory. And rightly so. The New Hampshire primary is highly competitive. Candidates go all-in. When they win, that should count for something. When they win big, that should count for something more—as New Hampshire is the last state where voters get to spend substantial time with the contenders, and to compare and measure their messages. The signals they send are instructive with regard to where the parties are headed, and with regards to sentiments in what is usually a November swing state. Winning also matters because it gives a boost to the first-place finisher, providing attention and money, and often inspiring wavering party leaders and interest groups to make endorsements.

3. If the expectations game must be played, keep things in perspective.

Trump and Sanders have led in New Hampshire since last year. The gaps in both races have narrowed and widened, but the front-runners have been clear front-runners for weeks. But New Hampshire voters are notoriously slow to make choices. There are still a lot of undecided voters on both sides. If Trump or Sanders gets beat, that will be a legitimate shocker, and the race will be transformed. A loss for Trump (after his defeat in Iowa) really would take the wind out of his candidacy. A loss for Sanders would make it much harder for him to make a case that he’ll be a contender through the convention.

Trump’s Republican-side lead has been so wide that, if another candidate gets close to him, that candidate will be positioned to emerge as the anti-Trump that the Republican establishment has been seeking. If, for instance, Kasich were to finish second—as some polls suggest is possible—he would get a tremendous boost. The same goes for Jeb Bush. On the other hand, if Iowa winner Cruz finishes second, it will confirm him as the conservative alternative to Trump and force at least some of the establishment to reconsider Trump as an unappealing but preferable alternative to the fiercely divisive Cruz. The candidate the establishment would like to advance, Florida Senator Marco Rubio, could be made or broken by New Hampshire voters. If Rubio finishes second, he’s on the march. If he finishes a weak third or fourth, then Rubio’s moment may have started in Iowa (where he finished a solid third) and ended in New Hampshire.

On the Democratic side, there is a history of second-place finishers claiming New Hampshire “wins” and making something of it. Famously, in 1992, Bill Clinton battled his way back from a series of setbacks and finished eight points behind Tsongas in New Hampshire. Clinton dubbed himself “the comeback kid.” There are no clear rules for how close the 2016 Democratic contest in New Hampshire must be for Clinton to claim a second-place “win.” But if the former secretary of state makes the race a single-digit contest, she’ll get credit for closing the gap with energetic and aggressive campaigning. If she does not, she’ll still be considered a front-runner. But the late-stage talk of a shake-up in the Clinton campaign will rise in volume.

Bernie Sanders is not ahead in New Hampshire simply because he is the senator from Vermont. New Hampshire voters sometimes give a boost to candidates from Massachusetts, which makes some sense as the southern region of the state is populated by many Massachusetts transplants and is reached by Boston media. But Massachusetts candidates—such as Ted Kennedy and Mitt Romney—have lost primaries in New Hampshire. And Vermont ex-governor Howard Dean’s 2004 defeat in the New Hampshire Democratic primary prevented him from becoming that year’s “comeback kid.”

For all the talk about the candidates, there’s another question in New Hampshire, a state that allows independents to vote in either party’s primary. Where is the political energy of the 2016 race is headed? In 2008—the last time both parties had competitive primaries in New Hampshire—the Democratic primary attracted 287,556 voters, while the Republican primary attracted 234,851. If Republican turnout exceeds Democratic turnout this year, that’s a signal worth noting. Similarly, if Democratic turnout is especially high, that’s significant. And watch the exit polls to see who turned out—with special attention not just to whom young voters back but how many of them turn out. This year, New Hampshire Secretary of State Bill Gardner is predicting that more voters will cast Republican ballots. If the under-30 vote is high enough to keep Democratic turnout ahead of Republican turnout, that’s something all Democrats will have to take seriously.