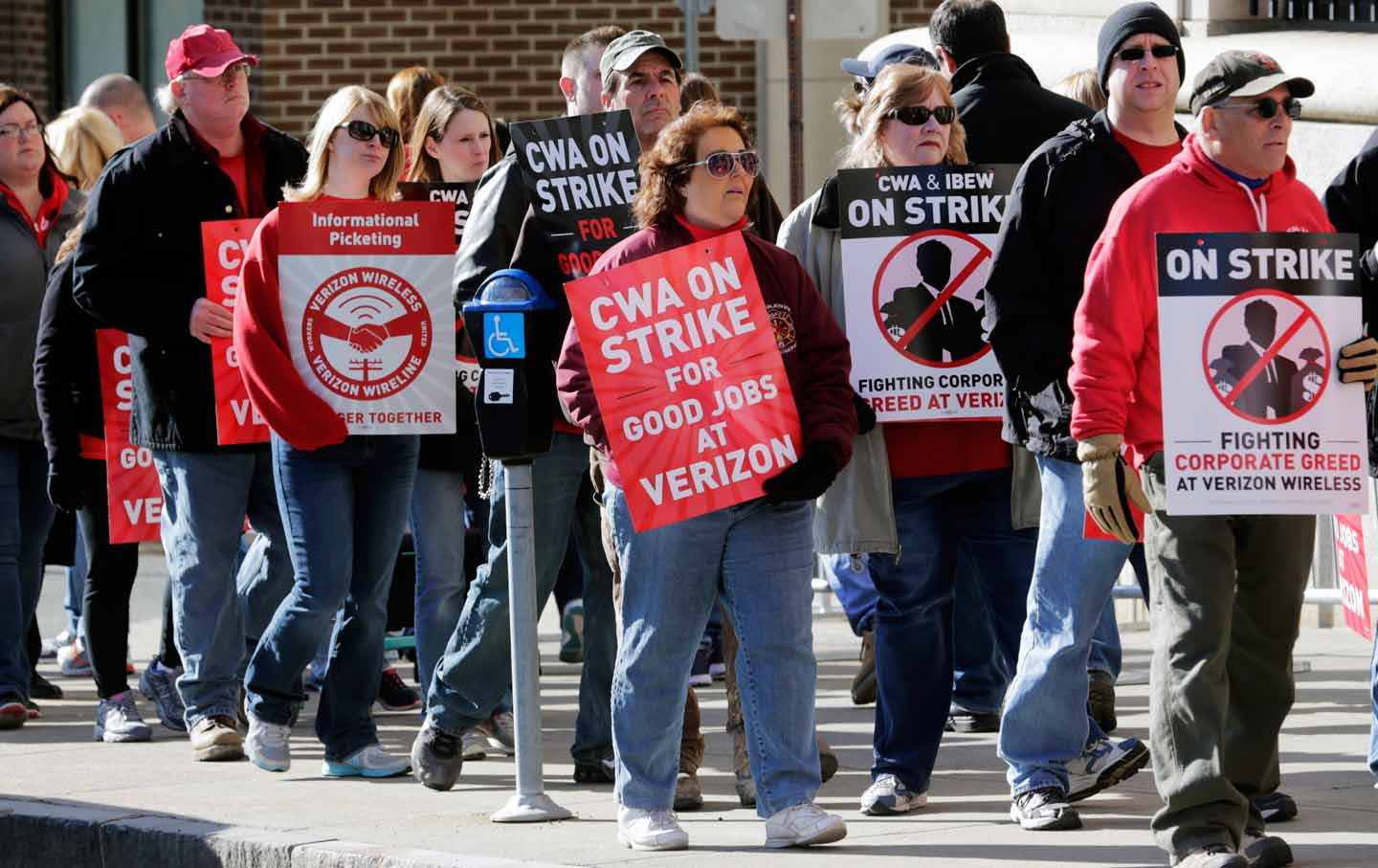 Genea Martin has worked for more than 19 years at Verizon. As a Brooklyn-based customer-service representative, she helps manage telephone and Internet accounts for businesses. It’s a well-paying job, but at 43 she’s increasingly anxious about the future. In recent years Verizon has shed thousands of jobs like Martin’s without replacing them.

And for the last 10 months, the telecom giant has waged war at the bargaining table with her union, the Communications Workers of America. The company is now asking for sweeping concessions on pensions and healthcare benefits, and wants more power to shift and outsource work, according to the union. “I want to be able to retire from this company, but I want to be able to have something to retire with,” Martin says. “We need a fair contract.”

Martin is one of nearly 40,000 Verizon workers from Massachusetts to Virginia who walked off their jobs Wednesday, kicking off the largest strike in the United States in nearly five years. An actual strike is a rare event in modern US labor relations—as their ranks have thinned and their opponents become more hostile, unions have been increasingly reluctant to call on members to withhold their labor. And the Verizon strike is massive by today’s standards. In 2015, major work stoppages idled only 47,000 workers, according to the Bureau of Labor Statistics.

The striking employees are mostly technicians and customer-service representatives like Martin. They are represented by the CWA and the International Brotherhood of Electrical Workers, and are overwhelmingly based in the company’s wireline division, the old-school side of the telecom business that has declined with the rise of wireless technologies.

Workers and union officials say they didn’t have much of a choice but to strike. They maintain that after months of contract talks, Verizon has not eased up on its drive for concessions. Employees have been without a contract since last August, when the previous deal expired. (Workers also went on strike before reaching that agreement, in 2012.)

Employees say the reason for the conflict is simple: corporate greed.

“Greed has no boundaries with this company,” says Don Trementozzi, president of CWA Local 1400, which represents roughly 600 striking workers in Massachusetts. “They think they’re kings running kingdoms. Well, they’re not kings and they’re not running kingdoms. They provoked this strike after 10 months of bargaining, and we’re going to destroy them until they come to their senses, quite frankly.”

Union officials say they’ve already agreed to shoulder a healthy chunk of healthcare costs. But the company is pressing forward with other gut-wrenching demands: Verizon wants to freeze pension benefits at 30 years and have the power to move technicians to sites away from their home states for two months at a time. It is also seeking more authority to outsource work.

Negotiators for Verizon want to lower the threshold of calls that are guaranteed to go to unionized call centers, according to Trementozzi. That translates into a labor shift toward non-union employers in the United States and overseas in low-cost countries like Mexico and the Philippines, where Verizon already operates some call centers.

“It’s a lose-lose situation for the customer and for American workers, and that’s what we have to stop,” says Lou Dalto, a 60-year-old Brooklyn-based customer-service representative. “Eventually, we’ll be reduced to nothing. It’ll all be outsourced work.”

Verizon disputes the union’s characterization of its demands. But it acknowledges that it wants greater flexibility to manage labor costs. And for good reason: Last year, the company’s unionized wireline business shrunk by 2 percent, while its largely non-union wireless division grew 7 percent. Wireline remains less profitable than the company’s wireless side, according to company filings with the Securities and Exchange Commission.

“There are so many provisions in that contract that date back to the Ma Bell era,” said Verizon spokesman Ray McConville, referring to the Verizon’s predecessor, a national landline system that was disbanded in the 1980s. “That’s not the world our business exists in anymore. We have much more economic and competitive pressures, and we need more flexibility with how we can deploy our workforce and serve our customers more competitively.”

But the company hasn’t been so tightfisted when it comes to investors.

Last February, Verizon announced it would pour $5 billion into share repurchases—that is, buying back its own stock to raise the price and benefit shareholders. The company has neglected to make new investments of that scope in its workforce, employees say. Likewise, it has failed to significantly expand Fios, a state-of-the-art fiber-optic communications network that unions see as the key to the wireline division’s long-term sustainability. Meanwhile, over the past three years, Verizon has turned $39 billion in profits.

“It’s not like we’re dealing with a company that’s facing a financial struggle,” says Dalto, the Brooklyn-based customer-service representative.

Depending on the outcome, the showdown at Verizon could encourage other unions to adopt similarly aggressive tactics.

“Its size and geographic scope give it the potential to influence workers in other sectors,” says Joe McCartin, a labor-history professor at Georgetown University and director of the university’s Kalmanovitz Initiative for Labor and the Working Poor. “If successful, this walkout might help revive a more militant spirit among unions, just as the Fight for $15 has been doing.”

As union density continues its decades-long slide, labor activist Joe Burns sees strikes of this sort as the only way to revive the labor movement.

“I think experience and history show the best mechanism that working people have to take on corporate greed and to level out income inequality is through strong unions that are backed by a strike,” says Burns, a negotiator with the CWA-affiliated Association of Flight Attendants and author of Reviving the Strike: How Working People Can Regain Power and Transform America. “I think there’s really no path forward for the labor movement that doesn’t involve strike activity and fighting back.”

Despite the nation’s historic level of labor peace, Burns likens the Verizon strike to a recent string of small-scale work stoppages: Last year, thousands of workers at oil refineries nationwide went on strike. So did nearly 2,000 employees of the Wisconsin-based Kohler Company.

“Even though strike activity hasn’t dramatically spiked, you are seeing in the last couple of years instances of workers being willing to take a stand in unionized industries,” Burns says. “I think there is a certain amount of restlessness and willingness to take stands, which you can probably place in the larger context of what’s going on politically in this country.”

The battle at Verizon has the fortune of coinciding with a presidential primary process, giving the strike an emphatically larger platform than most modern US labor disputes. As they campaigned ahead of next week’s critical New York primary, both Bernie Sanders and Hillary Clinton visited Verizon picket lines in New York City on Wednesday.

In a rousing speech, Sanders praised striking workers for “standing up for justice against corporate greed.” Clinton’s camp also put out a pro-union statement Wednesday. (However, critics have noted that the former first lady received $225,000 for a 2013 speech to Verizon.)

Amid the mounting criticism, Verizon CEO Lowell McAdam opted for a public defense of his company. In a Wednesday post on LinkedIn, the executive called Sanders’s views’ “uninformed” and “contemptible.” The senator retorted on Twitter that he welcomed such contempt.

At any rate, striking workers are grateful for the spotlight.

“Our signs say, ‘On strike at Verizon, corporate greed,’ and I think it resonates with people,” said Trementozzi. “They understand that struggle, living check to check, not making pennies on the dollar, and corporations are making zillions of dollars. I think they get it, whether they’re union or non-union.”

“Corporations want to put more cash in their pockets, and they generally don’t care about the people who work for them,” Trementozzi continues. “You can’t name that many companies that really care about their employees, that really take care of them, unless they’re forced to.”

Genea Martin, meanwhile, is preparing for a drawn-out struggle.

“We’ve been on strike before, but this one seems a little different,” she says. “In the past, we could say we would be on strike for maybe a week or two weeks. This time, it feels like it’s not going to be that short of a time.”

“We’re prepared to do what it takes,” Martin continues. “I’m willing to go the distance.”