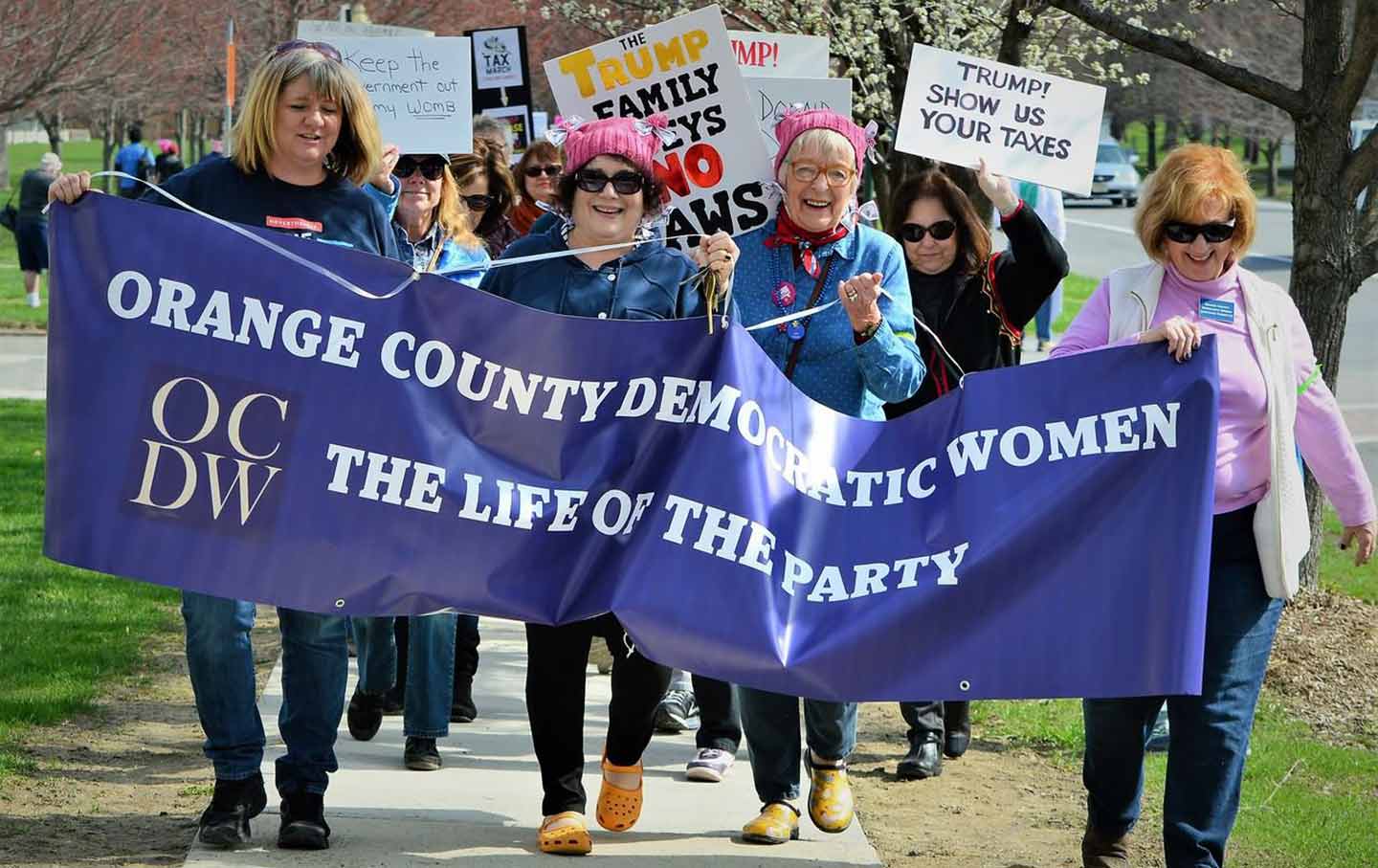 Donald Trump and his surrogates claim that the public doesn’t care about his tax returns. Polls consistently find that they’re dead wrong, and even most Republicans think he should release them.

On Saturday, at least 120,000 people took to the streets in dozens of towns and cities across the country to drive that point home, according to an unofficial estimate provided to The Nation by Joe Dinkin, national communications director for the Working Families Party, one of a coalition of 69 groups behind the protests.

As one might expect, there were big crowds in New York and DC and Los Angeles and in other big blue cities. But forecasts calling for scattered showers didn’t keep around 350 protesters from coming out in Goshen, New York, a bedroom community of around 15,000 mostly white people, 65 miles or so north of Manhattan.

In a scene that played out in small towns across the country, residents marched with homemade signs down Goshen’s main street, which is called Main Street and is lined with American flags and blooming fruit trees. Goshen’s no liberal enclave–it’s located in Orange County, which went for Trump by six points in 2016, and there’s only one Democrat on the town council. (One marcher told me that the community is more or less equally divided between Republicans and Democrats, “but Democrats don’t vote.”)

On Sunday, Trump tweeted that “someone should look into who paid” for the rallies–likely referring to a popular conspiracy theory on the right which holds that protests against Trump are funded by billionaire philanthropist George Soros. But in Goshen, that someone was a middle-aged woman named Joan Hutcher, treasurer of Orange County Democratic Women, who was passing around a jar stuffed with coins and crumpled bills to support the group’s work. She wore a t-shirt which read, “And You Thought I Was A Nasty Woman Before? Buckle Up Buttercup.” Before I could finish asking if her organization has seen an uptick in enthusiasm since Trump’s win, Hutcher cut me off by saying, “It’s been tremendous.”

“People are really wound up,” she said. “What you hear over and over again are things like, ‘I’ve never been active in politics but this is just not acceptable,’ or I’ve never done anything like this but I can’t take it anymore.’ People are really angry and really frightened.” She said that the Tax March was especially important to her “because his conflicts of interest seem overwhelming but we don’t really know. We have no idea.”

In one sense, the Tax March was narrowly focused, but the salience of Trump’s refusal to release his taxes goes beyond what they might reveal about his net worth or potential conflicts of interest. It was his biggest violation of long-agreed-upon norms of conduct for presidential candidates—as Kevin Kruse wrote for Esquire, he was the first candidate to refuse to release a detailed accounting of his finances since Watergate—and he got away with it. The same media that reported almost obsessively on Hillary Clinton’s private e-mail server, another process story, largely forgot about Trump’s taxes. We can’t know what’s in Trump’s head, but having gotten away with being the least transparent candidate in modern presidential history signaled that he could run the least transparent administration–and continue profiting from the family business–with impunity.

Legal experts say that his refusal to divest from the family business almost certainly violates the constitution’s emoluments clause. As David Cole wrote in The New York Review of Books:

Trump has somewhat gleefully asserted that the conflict-of-interest rules don’t apply to the president. He mixed together personal business and official diplomacy during several meetings and conversations with foreign officials during the transition. And despite his widespread private holdings in commercial real estate, condominiums, hotels, and golf courses here and around the world, he has refused to follow the lead of his predecessors by selling his assets and placing the proceeds in a blind trust. Instead, he has transferred management, but not ownership, of the Trump Organization. He retains his ownership in full. And he has assigned operational responsibility not to an independent arm’s-length trustee, but to his sons, Eric and Donald Jr.

And just this week, The Wall Street Journal reported that Trump’s re-election committees “continued to direct funds to his companies in the first quarter of the year, paying close to $500,000 to Trump-owned hotels, golf clubs and restaurants.”

In all likelihood, what we know of these kinds of conflicts barely scratches the surface. One thing that makes it difficult to hold Trump accountable is the opacity of his holdings. In December, The Wall Street Journal offered an example of the labyrinthine nature of Trump’s holdings in the form of a helicopter Trump owns in Scotland. “To be more precise,” wrote Jean Eaglesham, Mark Maremont, and Lisa Schwartz, “he has a revocable trust that owns 99% of a Delaware limited liability company that owns 99% of another Delaware LLC that owns a Scottish limited company that owns another Scottish company that owns the 26-year-old Sikorsky S-76B helicopter, emblazoned with a red ‘TRUMP’ on the side of its fuselage.”

Trump’s taxes would probably reveal more hidden conflicts. Perhaps more important, enforcing the norm that presidents must be transparent about their personal finances—and the law barring them from profiting from the office—would signal that Trump isn’t an emperor and can’t just operate above the law with impunity.

After promising repeatedly to release his taxes at some point in the future, Trump’s made it clear that he never will. Congress has the power under a 1924 law to force his hand, but in February, 229 House Republicans voted to keep his tax returns from the public. Their refusal to provide oversight is why Democrats winning back the House in 2018 is so important. Ultimately, it’s also why tens of thousands of Americans felt that they needed to take to the streets last weekend.