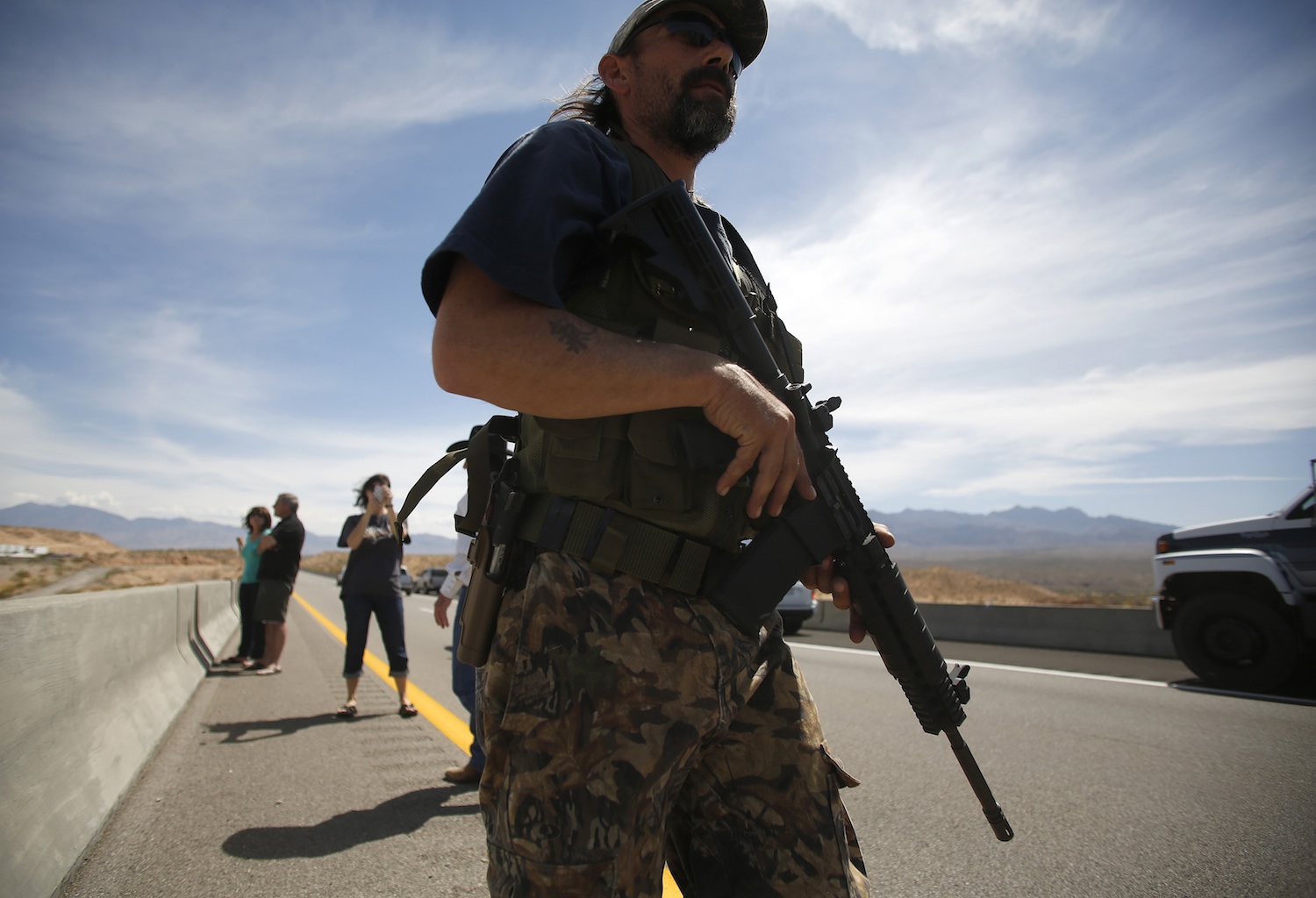 The standoff at the Bundy Ranch in Clark County, Nevada, has faded from the headlines, but a startling report released today by Southern Poverty Law Center warns that the incident may have some long-lasting, and potentially bloody, consequences.

Many of the militia members that flocked to the ranch were part of the anti-government Patriot Movement, an extremist movement with a long history but that gained serious steam during the Obama presidency. In 2008 there were about 150 Patriot groups nationwide—and there are over 1,000 today.

The SPLC report finds that this reawakened movement has drawn a very dangerous lesson from the standoff, which ended with the Bureau of Land Management backing off and leaving the ranch: a lesson that the federal government can be scared off by heavily armed militias.

That’s not to say the Bureau of Land Management should have engaged in a firefight, but the report makes clear the Patriot Movement has been energized by the “victory.” Already, a couple that was at the ranch undertook a headline-grabbing shooting spree in Las Vegas after getting amped for conflict weeks earlier in Clark County. The report highlights several other low-level incidents that haven’t gotten much media attention.

It also details, through interviews with militia members who were at the ranch—goaded on, also, by support from conservative politicians and media outlets—just how eager many participants were for battle. Here are the twelve scariest findings from the report:

1. “Almost overnight, thanks largely to the Bundy’s video going viral on antigovernment websites, the family’s fight with the federal government became a touchstone for various Tea Party Republicans, libertarians, antigovernment Oath Keepers and militia members, many of whom saw in the footage the beginnings of a war.”

2. “After watching the video from his home in Anaconda, Montana, 650 miles away, Ryan Payne, 30, an electrician and former soldier who had deployed twice to the Iraq war, became enraged […]

“Payne left that day with another member of his militia, Jim Lardy, and drove through the night, a few sleeping bags in tow, burning up cell phones hoping to bring every militia member they could. On April 9 he sent out an urgent call for the militias to mobilize. ‘At this time we have approximately 150 responding, but that number is growing by the hour,’ he wrote, offering directions to the Bundy ranch. ‘May God grant each and every one of you safety, wisdom and foresight, and courage to accomplish the mission we have strived for so long to bring to fruition. All men are mortal, most pass simply because it is their time, a few however are blessed with the opportunity to choose their time in performance of duty.’”

3. “In a low-lying wash where gates held the Bundy herd, an angry, heavily armed crowd grew, defying orders and engaging in a tense game of chicken with BLM rangers in riot gear demanding through loudspeakers that they disperse. They shouted profanities and gripped their weapons.

“Militia snipers lined the hilltops and overpasses with scopes trained on federal agents. What happened was not unplanned. As Payne later told the SPLC, he had ordered certain gunment ‘to put in counter sniper positions’ and others to hang behind at the rance. ‘[M]e and Mel Bundy put together the plan for the cohesion between the the Bundys and the militia…. Sending half of the guys up to support the protestors…and keep overwatch and make sure that if the BLM wanted to get froggy, that it wouldn’t be good for them.’”

4. “Writing on his blog hours after the standoff, Mike Vanderboegh, an aging government-hating propagandist from Alabama who heads the III Percent Patriots, characterized the standoff in grandiose terms. ‘It is impossible to overstate the importance of the victory won in the desert today,’ he gushed. “The feds were routed—routed. There is no word that applies. Courage is contagious, defiance is contagious, victory is contagious. Yet the war is not over.’”

5. “Ignoring the fact that Bundy and his followers were the ones who drew their weapons, U.S. Rep. Jason Chaffetz (R-Utah) told The Los Angeles Times, ‘You can’t just show up with guns blazing and expect to win the hearts and minds of the public.’ Chaffetz, a firm advocate of those protesting the BLM, concluded, ‘The federals need a little more Andy Griffith and a lot less Rambo.’”

6. “A month after the standoff, San Juan County, Utah, Commissioner Phil Lyman led a protest against a ban on the use of motorized vehicles in Recapture Canyon that was meant to protect archaeological sites from damage.”

“Waving Gadsden flags just like those draped over the slain officer in Las Vegas and decrying the actions of the BLM, Lyman and several dozen ATV riders—including members of Bundy’s family—rode into the canyon to defy BLM authority. Lyman told the SPLC that the ride was meant to be a peaceful protest, but he did little to conceal his rage over what he characterized as federal tyranny.”

“‘If things don’t change, it’s not long before shots will be fired,’ Lyman said, joining other conservative lawmakers such as Chaffetz in warning of violence if the federal government didn’t rein in the BLM. ‘We can avoid it. But it’s not going to be by the people changing their attitudes and accepting more intrusion into their lives. It’s going to be by the federal government acknowledging people’s freedom.’”

7. “This May in Texas, militias and their allies came to protest a BLM survey of more than 90,000 acres along the Red River, fearing the federal government was planning a land grab.”

8. “A month earlier in Utah, two men pointed a handgun at a BLM worker in a marked federal vehicle while holding up a sign that said, ‘You need to die.’”

9. “In New Mexico’s Otero County, a brewing confrontation between state and federal officials ended after BLM officials opened gates cutting off water for grazing cattle to protect the jumping mouse. Again, there were conspiracy theories demonizing BLM efforts to protect the environment.”

10. “[I]n mid-June, more violence erupted, as a BLM ranger and a California Highway Patrol officer were shot and wounded, allegedly by a self-declared sovereign citizen, Brent Douglas Cole, who was camping outside of Nevada City, Calif.”

11. “None of this has tamped down the rhetoric. The Bundy standoff has actually brought the spotlight to the antigovernment movement, and its leaders are soaking up the attention. Polarizing figures such as former Arizona sheriff Richard Mack and Stewart Rhodes of the Oath Keepers have been eager to take advantage of the moment. Mack, a longtime militia darling who has led a push for county sheriffs to stand against federal law enforcement agencies, told one crowd, ‘We don’t believe that bureaucratic policies and regulations supersede the Constitution. I came here because I don’t believe the BLM has any authority whatsoever. Grazing fees do not supersede life, liberty and the pursuit of property.’”

12. “Among [Bundy’s current supporters] are politicians belonging to the Independent American Party (IAP)— the same party whose banner rabidly anti-immigrant former U.S. Rep. Tom Tancredo ran under during his bid for to become governor of Colorado. In late May, at an IAP event to honor Bundy for ‘his courage in standing up for state sovereignty,’ Bundy and his wife, Carol, signed paperwork to join the Nevada chapter. ‘Cliven Bundy is my hero,’ Janine Hansen, an IAP candidate running for Nevada’s 2nd congressional district, told a gathering of supporters. ‘We cannot allow this incredible opportunity that Cliven has given us to die.…  It’s time that we are no longer serfs on the land in the State of Nevada. It is time that we become sovereign in our own state, our own sovereign state. It is long past time. We are not the servants of the BLM.’”