Mike Davis. (Photo by Adam Perez, courtesy of the photographer)

The word I most associate with Mike Davis—and have ever since we first met on the riot-ridden streets of Los Angeles’s Pico Union neighborhood in May of 1992—is “compañero.” I first heard Mike use it when he was writing what would become a historic piece for The Nation. In the middle of the fire and ferocity of that moment, he reached out for an interview about a largely unreported story: the neighborhood sweeps leading to the arbitrary arrests of hundreds, possibly thousands, of Pico Union’s Mexican and Central American migrants by the LAPD, the Border Patrol, and the National Guard. I was working at the Central American Refugee Center (CARECEN), then the largest immigrant rights organization in the United States.

“How do you think people are feeling about this, compañero?” he asked.

“I’m not sure yet,” I said, since I had just returned to the States from El Salvador’s civil war.

The way he pronounced the “o”—using a soft “o” instead of the strong “o” of “oh”—gave me political pause. “Compañero” (literally, in its Latin roots, “breaking bread together”) meant—and means—an enormous deal to me. I’d known too many who died for the great political and human spirit held in that ancient word—and wasn’t about to let this journalist dude wear it like some sombrero brought back from a weekend in Tijuana. I also suspected he might be another liberal journalist parachuting into Pico Union for a tropicalized update on the black-and-white story of LA riots dating back to the Watts upheavals of 1965.

But as we walked together past the ravages of the riot—blackened cars, burned-out swap meets and crowded single room apartment buildings around Macarthur Park, hollowed out as if they had been bombed—it quickly became clear I was dealing with someone seriously committed to LA, and to radical politics.

Mike described the situation in Pico Union as a “state of siege.” Long before most, he not only predicted the riots, but also saw that LA and the US were—in terms of the neoliberal order and the policing that protects that order—becoming América Latina, as his Magical Urbanism would later predict. As we continued strolling amid the apocalyptic neighborhood scene, he shared his analysis concluding that “over half of the first 5,000 people arrested during the riots were poor Latinos.” This was no simple-minded journalist erasing Latinos or reducing us to two-dimensional objects of the exoticized liberal gaze. 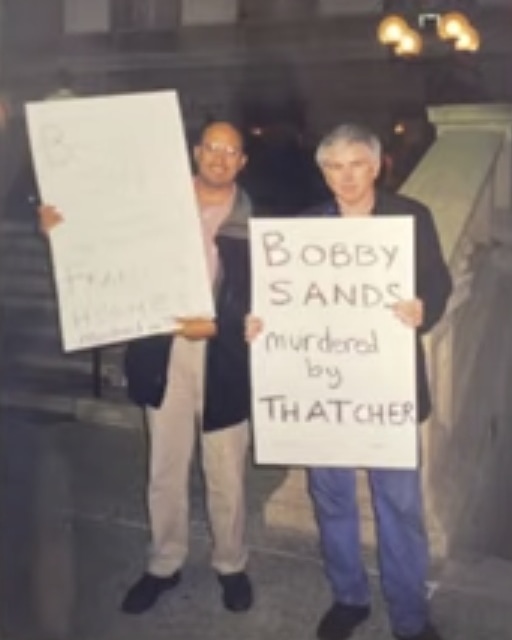 Compañeros: The author (left) and Mike Davis at an anti-Thatcher protest in 1993.

The article he ended up writing had the ever-distrustful 29-year-old me thinking: This gringo gets it. And get it he did, as he went on to become a friend and one of the greatest intellectual figures I will ever know.

When I first met him in 1992, I had my doubts about “that writer thing” because, in my action-oriented youthful bluster and bravado, I didn’t see writing as action. I didn’t see many US writers accompanying their words with actions like the guerrillero poet Roque Dalton and the other poet warriors I admired. With the encouragement of several LA writer friends, I would eventually become a writer myself, but no one in the US would influence my thinking, no one would embody the commitment to the marriage of word and deed like Mike.

He was one of the preeminent poet warriors of the English-speaking world. It is a testament to the power of Mike’s thought and passion that thousands of other writers throughout the world would express similar sentiments, even now, at his life’s end.

Roberto Lovato’s Journalism of the Soul

Mike welcomed my partner and me to the rickety but gorgeous Victorian he and his then-wife, Sophie, rented in Echo Park. I’d just returned to the US, shattered by the war in El Salvador. Mike’s humble and generous demeanor, his sardonic wit and, especially, his big red heart did much to help me pick up the pieces of myself in the smoggy city my own foggy San Francisco upbringing would not allow me to like. Eventually—thanks in no small part to Mike’s vision of LA—I too would grow to not just like, but to love the City of Quartz that his brilliant book elevated to its rightful place as the utopian and dystopian metropolis that he, more than all of us, saw the future in.

Mike’s passing made obvious to so, so many across this troubled world, how much he’d been preparing us for things like the ecology of fear brought on by ruthless capitalist development and climate change, Covid—“the monster at our door”—or the cheapening of life by the planet of slums created by the neoliberal order. Mike raged against this order right up until he left his friends breathless two weeks ago when he announced that he would no longer respond to messages because it was “my turn to fade” in the company of his beloved wife, Alessandra and family.

My brilliant friend would kill me for using a religious-sounding trope from my evangelical youth, but the God’s or Marx’s truth is that Mike Davis does and will continue to rise and rise in us, and in our movements. He will do so because he lived and loved, wrote and acted with the spirit described by one of his favorite poets, Bertolt Brecht:

Long before he told his friends that he was leaving us to “hang with Ale and the kids and watch incomparable Pacific sunsets from my porch,” Mike had already became a true compañero—a Spanish word that can mean friend, roommate, schoolmate, lover and, most importantly for Mike, revolutionary.

Let us honor him by raising our fists and proclaiming in the great revolutionary tradition, ¡Compañero Mike Davis, Presente!