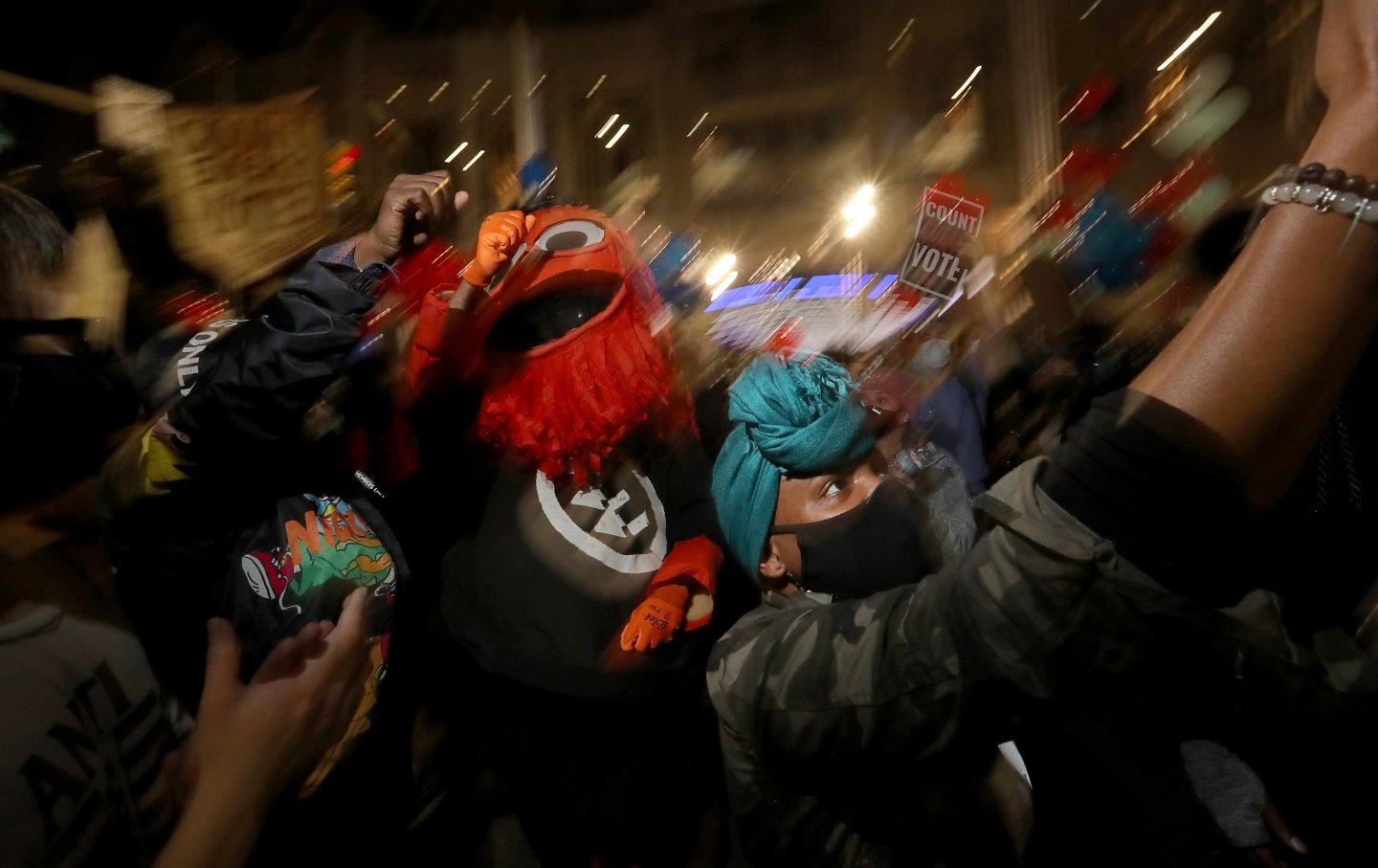 It all came down to Philadelphia. It was only fitting that the most acrimonious presidential race in recent history would meet its end in a city that takes pride in its underdog status and refusal to back down from a fight. Electorally speaking, Pennsylvania is always a big deal, and when the prolonged nightmare that was the 2020 presidential election finally heaved itself across the finish line and the race was called for Joe Biden, it was clear that the Keystone State’s coveted electoral votes had been the tipping point. Its biggest city, heavily Democratic Philadelphia, had long suffered the indignities and insults of Donald Trump and his cronies. As the rest of the nation anxiously waited, by Saturday morning, at least one of Trump’s many campaign smears had proven true. Turns out bad things do happen in Philly… if you’re a racist, fascist jagoff like him.

And as anyone who lives here can attest, the mantra “No one comes for Philly” is less a slogan than a battle cry. The city’s tough, acerbic reputation is well-earned. It has turned the truism “Nobody likes us, we don’t care” into a point of pride, and has happily adopted a gleefully violent, goggle-eyed antifa chaos beast named Gritty for its unofficial mascot. It’s the city whose sports fans are feared and reviled from coast to coast, whose gastronomic delicacies revel in fatty excess, and whose denizens are famous for throwing batteries at Santa Claus and flipping cop cars for fun.

I grew up across the river in rural South Jersey, but spent most of my formative years either visiting or living here, and finally made my way back after a decade in (sorry) New York City. That time away didn’t rob my vocabulary of its love for Wawa or water ice or jawns various and sundry, or my pride in this city’s radical history or its “Fuck me? Nah bud, fuck you!” attitude. Of course Philadelphia and its people are so much more than those colorful stereotypes, but as the election drew to a close, a kernel of truth was made apparent. Trump tried to come for Philly—and, true to form, Philly beat his ass.

That victory wasn’t immediate, though. On Thursday, as vote tallies stalled and voters’ anxiety spiked, a “Count Every Vote” rally convened outside the Convention Center and morphed into a cathartic block party, complete with conga lines and a DJ. Inside, poll workers continued counting the thousands of votes that the sitting president was already swearing were somehow “illegitimate.” When I stopped by on Friday afternoon, Trump’s lead had narrowed, and the party was still going strong. As a small crowd of bedraggled Trump supporters gathered inside a penned-in, police-protected space to protest the fact that the election wasn’t going their way, hundreds of Philadelphians danced, sang, chanted, and generally had a grand old time around them, pausing occasionally to heckle the shrinking “Stop the Vote” contingent. Signs implored the poll workers to “Count Every Jawn” and invited the Trumpers to “Kiss Philly’s Queer Ass!” In an elegant bit of foreshadowing, one sign warned Trump himself, “This Is Philly, We Will Fuck You Up!”

The Trump fans’ indignant murmurs were no match for DJ Neeek Nyce’s soundsystem (let alone Philly Elmo and the Positive Movement drum line). There was no stopping the dance party or quashing the convivial mood. In the background, a huge banner proclaimed, “The people have spoken!” The air felt electric, and the party went on long after the Trumpers gave up and slunk home. Even in a time of great uncertainty and unrest, there remains at least one inalienable truth: Philly goes hard, especially when we win.

This Is a Horror Story: How Private Equity Vampires Are Killing Everything

The rally was scheduled to pick back up where it had started the next morning, but plans soon changed. Moments after I read that CNN had called the state for Biden, a cry went up around the city—starting with my neighbors, who ran down our South Philly block screaming, “Fuck Donald Trump!” It was a phrase that would be echoed around the city all day, as groups of Philadelphians gathered at Independence Hall, at the Convention Center, and at City Hall to celebrate Trump’s defeat, strolling freely between the three landmarks as the National Guard looked on. YG and Nipsey Hustle’s anthemic 2016 single “FDT (Fuck Donald Trump)” wafted through the air (and climbed the Billboard charts) as a crowd surrounded an inflatable dummy with Trump’s face to indulge in some collective venting. It showed up on T-shirts, on signs, and on the lips of Philly residents who hollered at their friends down Broad Street and out car windows on Market. As the sound of steel drums filled the air, the prevailing sentiment was that his loss was our gain, and with that came an overwhelming sense of raucous joy—and relief.

Despite the widespread celebrations, Philly remains a city built on contradictions, some of which were thrown into sharp relief as the electoral drama dragged on. It is hailed as the birthplace of American democracy and takes pride in symbols like the Liberty Bell and the Declaration of Independence, yet remains the country’s poorest major city and has continually failed its houseless residents and those who are struggling with opioid addiction. A proud abolitionist tradition contrasts with a modern legacy of segregation, disenfranchisement, and violence against the Black community. And what was a moment of revelry and rebellion for some was one of deep sorrow for others. On the same day that Center City’s streets overflowed with happy crowds, at the National Baptist Temple Church in North Philadelphia, the family of Walter Wallace Jr. said goodbye to their son, brother, friend, and father.

Two police had shot and killed the disabled 27-year-old in front of his weeping mother a week prior, mere blocks away from where the city’s 1985 MOVE bombing killed 11 people and leveled an entire Black neighborhood. The murder spurred protests and renewed calls for police reform and abolition, and on Friday evening, a march calling for justice for Wallace merged with a “Count Every Vote” demonstration. It was a reminder that there are multiple Philadelphias, and that disposing of Trump is far from a cure-all for the myriad ills that afflict the city and its residents.

On Saturday, steps away from hundreds of jubilant Biden supporters (and even more Trump haters), the Philly United Front held an assembly in front of City Hall. The group called for an end to the war on Black and brown communities; decried racist, ableist police brutality and white supremacy; and demanded the immediate release of West Philly activist and teacher Ant Smith, who has been detained on federal charges since October. As a massive papier-mâché eagle puppet “flew” down Broad Street and an antifa clown juggled bowling pins nearby, this coalition of Philly voices left the assembled crowd with an important reminder before leaving them to their merrymaking: that “whoever’s elected, the struggle continues.”