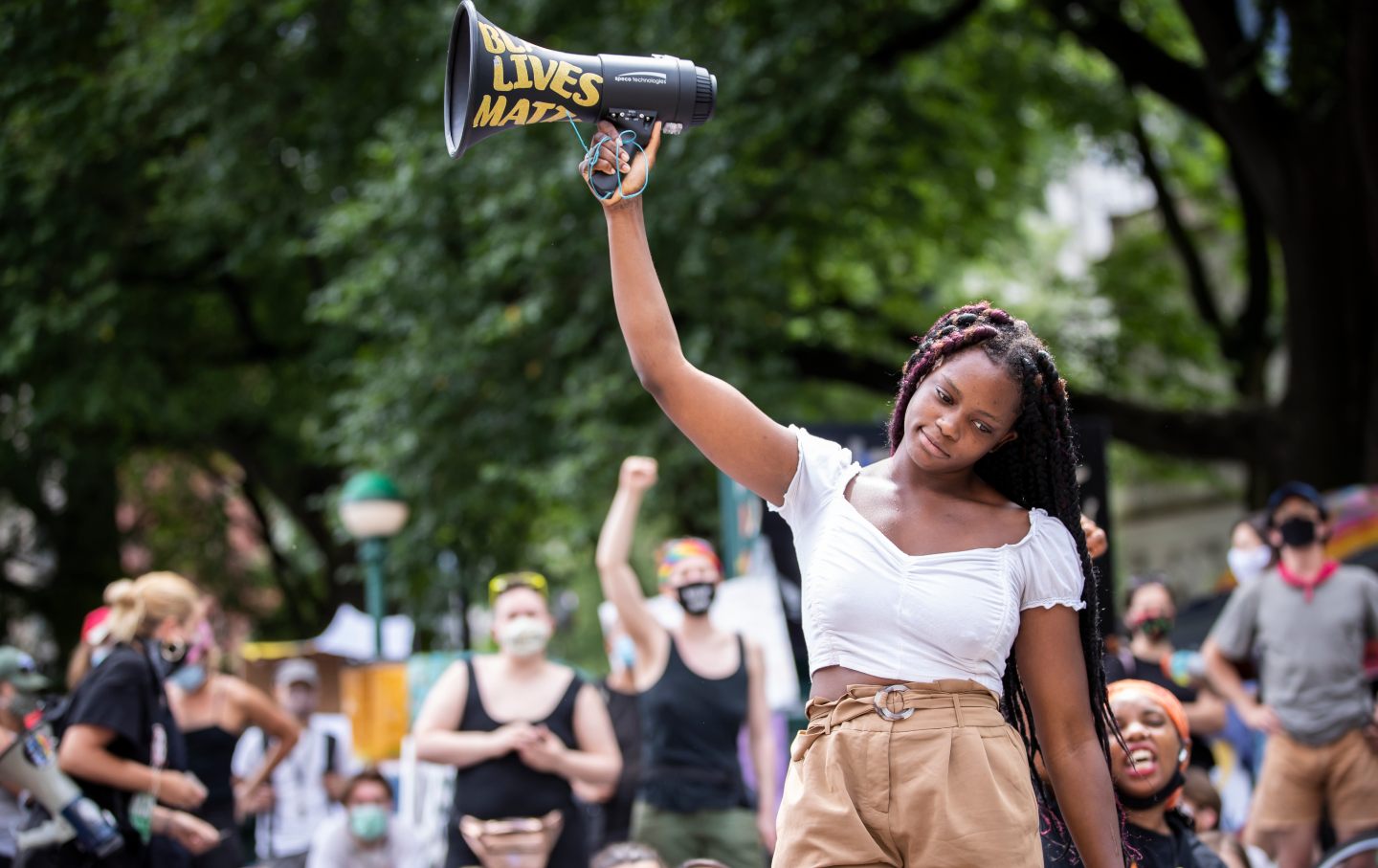 Kiara Williams holds up a megaphone as she talks to the crowd assembled in the Occupy City Hall campgrounds in New York City. (Ira L. Black / Corbis via Getty Images)

We are seeing one of the largest uprisings in US history, and Black leftist organizers and Black working-class people are leading it. The video of George Floyd begging for his life and calling for his mother as Derek Chauvin, a white police officer, kneeled on his neck for eight minutes and 46 seconds made Floyd this generation’s Emmett Till. When white Americans watched that scene of unchecked racism, state power, and the toxic masculinity that permeates police culture, they had a choice: to allow that cop to speak for them or to hit the streets as part of a movement against white supremacy and police repression. Millions across the world opted for the latter.

This is not like the 1960s. White people marched in civil rights demonstrations, formed committees on interracial cooperation, and joined with the Black freedom movement, but the fire this time is hotter. We did not see this many simultaneous protests that were this large and this diverse. We also see mass militancy and the willingness of large numbers of people to take risks. During a dangerous pandemic, people are facing down tear gas, rubber bullets, and police batons. While protesters hold up the simple message “Black Lives Matter,” organizers in the Movement for Black Lives make clear that this fight is as much about ending racial capitalism as it is anything else.

The white left needs to understand that this is what class struggle in the 21st century looks like. To deny that and reduce the protests to an “identitarian” impulse is self-defeating to any serious left project for systemic change. Black poor and working-class people experience capitalism and white supremacy as intertwined: Police violence, targeted mass incarceration, and social and economic abandonment are linked. The left loses strength and credibility if it pretends that there is a color-blind class experience.

In his 1991 book, The Wages of Whiteness, historian David Roediger describes how the white working class evolved in juxtaposition to enslaved Black labor. White supremacy was a part of the psychological wage that was paid to buy the loyalty and shape the consciousness of white workers in the antebellum period, and that legacy carried forward. White workers might have been poor, but at least they were not n_____s. White workers were given a kind of caste distinction with material benefits and the social power to violate, harass, and kill Black people. For much of US history, policing was a white man’s profession, originating in part out of the slave catchers of the Old South. The psychological wage of whiteness can be read into the face of Chauvin as he looked at the cell phone camera while he murdered a handcuffed, unarmed Black man in broad daylight. Unmoved, unaccountable, and fearing no one, he projected the message: “I am empowered to do this.”

Yet a sector of the white left remains in stubborn denial about the centrality of Black struggle and Black leadership to any successful and sustainable movement for radical change. There are two versions of this argument. One clings to the notion that so-called identity politics are divisive and that the left should focus on economic platforms that can unite the entire working class. The second is an updated version that argues that systemic racism did exist but with the end of de jure racism that all changed. Supporters of these arguments lump together all Black political voices as identitarian if they foreground the fight against racism. They ignore the Black left voices that have argued against narrow identity politics, bourgeois Black nationalism, mainstream integrationism, and class-biased representational politics. From the Combahee River Collective to the Black Radical Congress to many of today’s organizers, Black leftists, especially Black left feminists, have never pushed a classless race analysis, or a raceless or genderless class analysis.

The failure to confront white supremacy as a defining feature of US capitalism has consequences. The Bernie Sanders campaign is one sad example. I offer this critique as someone who publicly supported Sanders and who, along with others, tried to push his campaign to advance a robust racial justice agenda. Nearly all the Democratic presidential candidates showed up in Selma, Ala., to commemorate the anniversary of the civil rights march across the Edmund Pettus Bridge. At a time of increasing white nationalism, it was important for many Black people that political leaders mark the fight for racial justice in the South. Sanders, the most left candidate in the race, was conspicuously absent.

Then, Sanders was supposed to go to Mississippi to give a speech on race to coincide with his endorsement by Jackson’s radical Black mayor, Chokwe Lumumba. Black feminist Barbara Smith was on a plane to meet him and stand on the platform beside him. He never showed up. Instead, he went to Flint, Mich., where again he was supposed to deliver a speech on race to the African American community. Rather than give that speech, he awkwardly moderated a panel of brilliant Black activists teaching the overwhelmingly white audience about racism. Still, Sanders’s platform would have materially improved conditions for large numbers of Black working-class and poor people, which is why many Black activists supported him. But his failure to articulate a clear understanding of and commitment to fighting the white supremacist underpinnings of racial capitalism may be why he never garnered the Black support needed to win the nomination. There were many strengths in Sanders’s campaign, but this may have been its fatal flaw.

Another disturbing exemplar of the predominately white left’s challenges with race is Democratic Socialists of America. On the one hand, wow. Trump’s election fueled the organization’s exponential growth, and subsequent electoral victories and campaigns have emboldened it. By presenting candidates and demands that seem common sense to many Americans, DSA has helped to reintroduce socialism into mainstream political discourse.

That said, and despite a handful of brilliant leaders in the Afro-Socialist caucus, DSA is largely devoid of Black leadership at the national level. How can that be acceptable in 2020? Why isn’t everyone in the organization worried about the implications, or at least the optics? Why hasn’t DSA gone into a deep retreat to read, learn, and then propose bold changes that will open the doors to Black left leadership? If they were unsure who the fiercest anti-racist organizers of this generation are, they need only to look to the streets of Atlanta, Chicago, Minneapolis, Los Angeles, and New York.

Can we lift this political boulder and build the principled solidarity required to sustain a radical anti-racist left movement in this country? There are some very hopeful signs. Hundreds of thousands of white people waded into the streets of major US cities and small towns to say no to racism. Anyone who thinks that is not a sea change in racial consciousness has not been paying attention.

Second, there are Black and Latinx-led rumblings in the electoral arena. The reimagined and more inclusive Working Families Party under Maurice Mitchell’s leadership is a challenge to the mainstream corporate Democratic Party, which has absorbed so many career-minded Black politicians into its system of patronage and compliance. Justice Democrats are also a breath of fresh air, unafraid to challenge incumbent Democrats with more progressive alternatives. 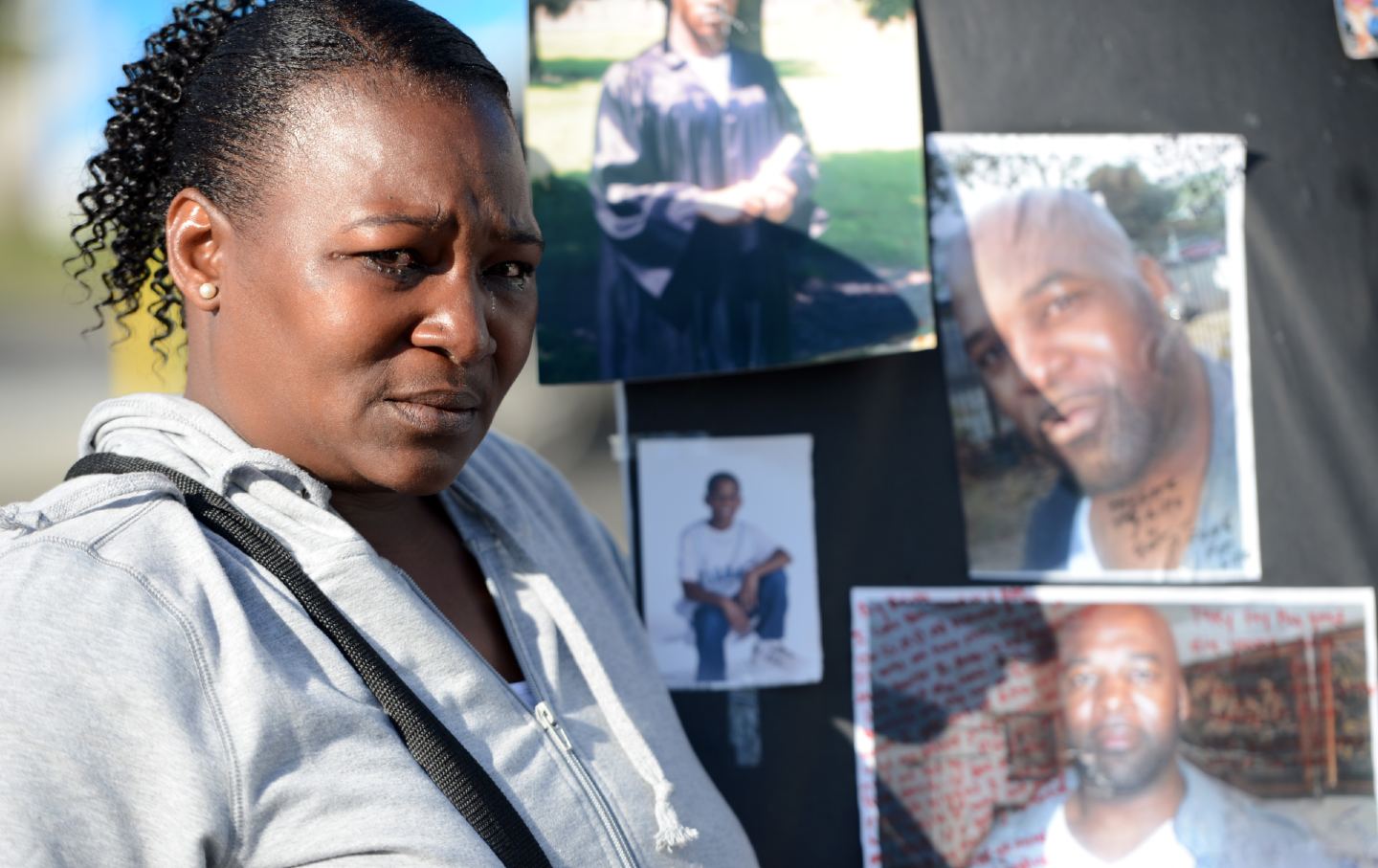 Third, there is the growing visibility of Black-led social movements, which have spent the last few years building power. There is a direct link between the Black Lives Matter movement of 2012–16 uprisings and the protests of 2020, between Ferguson and Minneapolis, and between Mike Brown and George Floyd, both of them stand-ins for many others, including many women and trans victims of police, vigilante, and even intimate partner violence. The debates, local campaigns, organizational infrastructure, relationship building, and self-critiques that have occurred since Ferguson have prepared a new cadre of leaders for the biggest battle of their lives.

The Movement for Black Lives (M4BL)—which emerged out of the protests of the 2014 murders of Eric Garner, Tamir Rice, Sandra Bland, and Michael Brown—is building broad-based support for a set of policies coming out of the coalition’s own policy and research team. It has updated the 2016 Vision for Black Lives document, which Robin D.G. Kelley called nothing less than “a plan for ending structural racism, saving the planet, and transforming the entire nation.” On Juneteenth weekend, M4BL’s website boasted over 500 in-person protests across the country.

In 2017, M4BL launched a multiracial formation of over 80 organizations called the Rising Majority. This alone is a reversal of the usual practice of large white-led formations calling together groups, framing the conversation, and then adding Black-led organizations to the mix after the foundations are laid. Rising Majority is anti-racist, anti-capitalist, and Black-, indigenous- and people-of-color-led. It has worked to build unity with progressive elected officials, holding a televised forum with Representatives Ilhan Omar, Alexandria Ocasio-Cortez, Ayanna Pressley, and Rashida Tlaib at Howard University in February. It is also building solidarity across movement sectors. In 2018, M4BL sent a contingent of activists to San Diego to support Mijente’s #FreeOurFuture Day of Action against immigration detention and ICE violence. More recently, it cohosted a virtual teach-in with Angela Davis and Naomi Klein that drew over 200,000 viewers.

Leftroots is another people-of-color-led socialist organization that has been engaging activists in deep discussion and study over the past few years. Finally, academics and intellectuals are organizing through the Black feminist-led network Scholars for Social Justice (SSJ), which has issued statements and op-eds supporting Black protest, held teach-ins, shared curricula, and convened a working group on reparations in higher education. SSJ hosted a major online teach-in on universities and police during Juneteenth weekend. Given the neoliberal politics that have dominated universities and the increased corporatization of universities, SSJ is an attempt to step outside of the constricting intellectual and political framework of the academy.

If the white left embraces this ascendant Black leadership, we will all be stronger for it. This is a time for rigorous debate, principled solidarity, and humble determination. And right now, I see more and more of all of those things. In the middle of it all, challenges notwithstanding, I am determined to have an “optimism of the will.” Pessimism be damned.