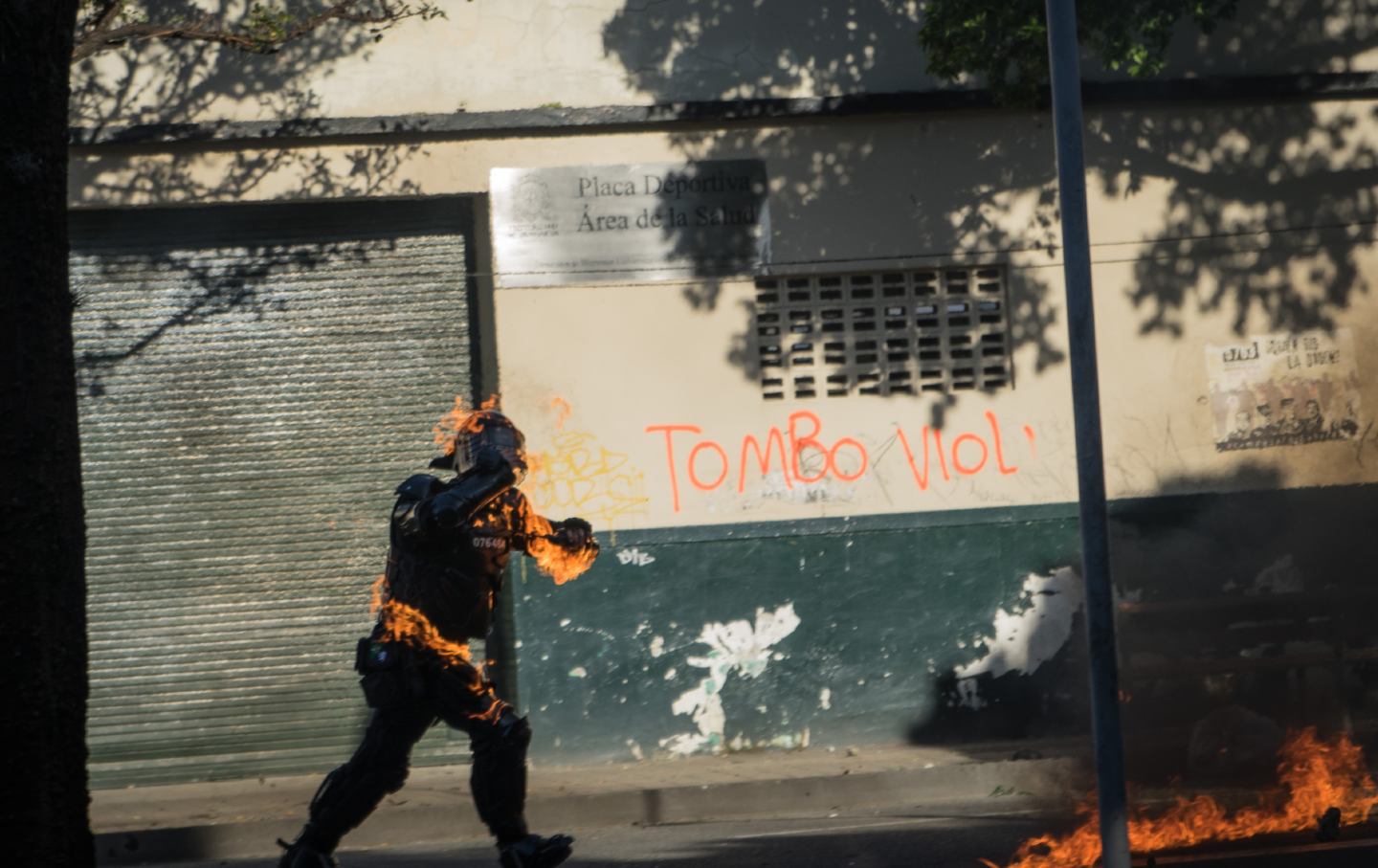 A police officer runs after being set ablaze during a demonstration against police violence in Medellin, Colombia, on September 11, 2020. (Santiago Botero / NurPhoto via Getty Images)

It’s been less than a year since Colombia’s national strike, in which millions marched en masse to protest unpopular economic reforms, deep-seated corruption, and military abuses. On September 9, protesters took back to the streets. A 2016 peace agreement ending over 50 years of armed conflict with a leftist guerilla group remains unimplemented, activists and social leaders are still being massacred with impunity, and unemployment remains high. Now, a new grievance has been added to the list: police violence.

Early in the morning of September 9, a video surfaced showing Javier Ordóñez, a 45-year-old law student and father of two, pinned to the ground by police officers in Bogotá. According to reports, the officers went on to beat and tase Ordóñez at least 12 times. Reports claim Ordóñez was detained and beaten by the officers for violating a curfew in place for Covid-19. (Later reports suggested he was initially detained for alcohol consumption in public.) “Por favor,” Ordóñez is heard pleading in the video. He died from multiple bodily and head injuries later that morning.

The video of Ordóñez’s arrest immediately went viral, and within hours, had drawn hundreds of protesters out onto the streets, where some incinerated cars, motorcycles, and police stations while demanding justice for Ordóñez’s death. The police responded aggressively. In dozens of videos, police are captured firing live ammunition and tear gas directly at protesters and beating unarmed protesters with batons. At least 14 people died and hundreds suffered injuries. Four women accused the police of sexual assault during the protests.

The police violence drew immediate censure from public officials, and drew battle lines similar to the ones that have emerged in the US in the wake of nationwide Black Lives Matter protests. Bogotá Mayor Claudia López remarked that the event amounted to a “massacre against our youth” and called for reform from the national government, which has jurisdiction over Colombian police through its Defense Ministry. Senator Gustavo Petro, an influential leftist political figure, went further, demanding the resignation of Defense Minister Carlos Holmes Trujillo. In response, President Íván Duque, a conservative well-known for his bona fides with former president Alvaro Uribe, who led a scorched-earth campaign against the FARC guerrillas and is currently awaiting trial for alleged witness tampering of paramilitary leaders, defended police from what he called efforts to “stigmatize the institution” for the actions of a few individuals. Defense Minister Trujillo called the protests “the most egregious example of organized crime,” and other conservative officials attributed them to left-wing guerrilla groups.

Despite the recent national attention paid to police violence in Colombia, demands for institutional reform are not necessarily new. Less than a year ago, protesters called for the reform of Colombia’s notorious riot police, known as the Esmad, after an armed officer killed Dilan Cruz, an 18-year-old high school student, during the anti-government national strike. At the time, President Duque commented that “these types of events should not occur,” but fell short of promising any reforms. The attorney general’s office and the military justice court have since reported that more than 100 cases of potential police abuses during last year’s protests were being investigated, but as of January, not a single officer had been charged. The Esmad officer accused of Cruz’s death remains under investigation, but has not been detained or fired from the police force.

For decades, Colombia’s police has been shaped by the country’s long history of political turmoil and relentless war, making any sort of reform difficult. Unlike other police forces around the world, the country’s national police operate under the Defense Ministry as opposed to the Interior Ministry or the Justice Ministry. As a result, the police also follow a hierarchical structure with military ranks and a strict chain of command, which traces back to the military dictatorship of Gustavo Rojas Pinilla in the 1950s, according to Jerónimo Castillo, director of security and crime policy research at the think tank Foundation Ideas for Peace.

The move to include national police in the department of defense was originally intended to prevent elites from using the police for their political interests, but has since made it nearly impossible to hold police accountable. For example, crimes committed by police are usually tried by military courts, which experts say have shielded most offending officers from any serious punishment. In a forthcoming study, the nonprofit Temblores reported almost 40,000 cases of police violence from 2017 to 2019, including 289 homicides. Police violence also disproportionately targeted populations at risk, such as drug users and Afro-Colombians. Many of these cases never make it to trial. Records on cases that are brought to court have not been made publicly available, but Temblores believes most are granted some level of impunity. “In all the cases we’ve followed, the military justice has acquitted the defendant or the judge has handed down a small sentence,” says Alejandro Lanz Sánchez, Temblores’s co-director.

Impunity is also rife in the Esmad, the police’s riot control unit. Since its inception in 1999, when the Colombian government was in talks with the United States over Plan Colombia, a $10 billion counterinsurgency and counternarcotics agreement, the Esmad has killed 34 people, according to a 2019 Temblores report. Most victims have been activists within Indigenous, student, or peasant movements. None of these cases have resulted in a conviction.

Colombia’s 50-year armed conflict with leftist guerrillas has also been used by government officials to justify police violence. During a 2013 agrarian strike, in which Esmad forces killed four protesters, Colombia’s defense minister accused the Revolutionary Armed Forces of Colombia (FARC), a Marxist rebel group that signed a peace treaty in 2016, of infiltrating the marches. Although the FARC has since demobilized, the current administration, led by conservative president Iván Duque, has also attributed recent protests to left-wing guerrillas. The high commissioner for peace, Miguel Ceballos, claimed without evidence that FARC dissidents and the National Liberation Army, another smaller guerilla group, worked out “a clear and premeditated plan” to destroy various police stations.

Colombia’s close relationship with the United States and the longevity of the armed conflict has meant that Cold War–era thinking is still entrenched in the military, according to Arlene Tickner, an international relations professor at Universidad del Rosario. Unlike the military, the police are not instructed on counterinsurgency tactics and the National Security doctrine that was exported from the United States to Latin America in the 1960s, but since they also fall under the Defense Ministry’s umbrella, it’s unclear to what extent that mentality is also prevalent within police ranks, says Tickner.

Colombia’s protests are not only the result of long-standing concerns over police accountability. They are part of a long list of grievances, including the government’s refusal to implement the 2016 peace deal with the FARC, which has led to power vacuums in former FARC territories and are now being violently contested by other paramilitary and guerrilla groups. Along with a surge in violence in rural areas, frustrations over high unemployment and the government’s weak handling of the pandemic has led to explosive protests in Colombia’s major cities that show little sign of subsiding.

Dozens of police officers are now under investigation by the National Police and the attorney general’s and inspector general’s offices. In a rare move, the attorney general announced last week the launching of an investigation into Ordóñez’s case for possible human rights violations committed by police. (In the weeks since Ordóñez’s death, new reporting on his case suggests that the officers who killed Ordóñez had been targeting him weeks earlier, had tried to fabricate assault charges to keep him in custody, and destroyed a cell phone used to record the moment when they arrested and assaulted him.) Meanwhile, the Supreme Court recently ordered the Esmad to suspend its use of 12-gauge shotguns and Defense Minister Trujillo to apologize for police abuses from last year’s national strike. President Duque’s government is appealing the decision.

Human rights groups like the National Movement for State Crime Victims have also emitted a list of demands that includes reforming the country’s security doctrine, abolishing the Esmad, and placing the police under the Interior Ministry’s rule. Support for these demands may be increasing: According to a poll from the Universidad de los Andes’ Democracy Observatory, trust in Bogotá police sunk to 25.6 percent this year. Miguel García, codirector of the Observatory, believes that the excessive force seen during last year’s national strike may be the reason. Police violence can also signal to citizens that their government is unwilling to listen to their grievances. “A lot of the times what protesters want is a dialogue with the government. They don’t want to talk to police; they want to talk to people in the ministries. Bringing in the police represents a refusal to do that,” says Adam Isacson, a defense expert at the Washington Office on Latin America.

After nearly a year, the second wave of Colombia’s national strike has returned. Last week, hundreds marched in Bogotá, carrying images of slain social leaders and seeking justice for the 14 people killed in recent protests. An old rallying cry returned: “Stop massacring us.” As protests resume, Colombians are watching to see how the government responds: whether it will hear out protesters’ demands, or once again deploy police to suppress potential dialogue.