Journalist Siddique Kappan has been in prison since October 2020. He has been charged under India’s sedition law and the draconian Unlawful Activities (Prevention) Act (UAPA) for trying to report on the Hathras gang rape and murder case. In Hathras, a 19-year-old Dalit woman was gang-raped by upper-caste Thakur men and later died in the hospital. She was hurriedly cremated by the Uttar Pradesh Police in the middle of the night without the consent or the presence of her family. The gruesome violence and the police complicity in protecting the perpetrators made headlines in India. Kappan and three others—two student activists, Atikur Rahman and Masood Ahmed, and their driver, Aalam—were arrested. After his arrest, Kappan was tortured by the police and denied medication for diabetes.

Almost six months after his arrest, a 5,000-page charge sheet was filed against Kappan accusing him of failing to write like a “responsible journalist” and of orchestrating riots by reporting on oppressed and marginalized communities. The charge sheet said, without irony, that such reports could “incite Muslims,” and cited 36 articles written by Kappan as evidence for his crimes.

What the Uttar Pradesh Police considers sedition is in reality reporting—on the Indian government’s failed Covid response, on the stigmatization of Muslims during the nationwide lockdown in March 2020, on protest against the citizenship laws, on arrests of student activists and political prisoners, and on the February 2020 Delhi Pogrom. The charge sheet doesn’t claim that Kappan’s reports are factually inaccurate or false, instead charging him merely with the crime of reporting.

A year after his arrest, Kappan has been denied bail, and his lawyer, Wills Mathews, says that he has “yet to receive authorized copies of this charge sheet” from the police. Kappan is not alone. Kashmiri journalist Aasif Sultan has been in jail for more than three years. He is also held under the UAPA and targeted for a story he wrote.

Kappan and Sultan, along with others, remain incarcerated without a trial on fabricated charges: They are in jail simply for being journalists. Most recently, others have been harassed and threatened for reporting and documenting anti-Muslim violence in the Indian state of Tripura, where Hindu mobs attacked mosques and properties owned by Muslims. Since then, Tripura state police have charged 102 social media accounts, including journalists Meer Faisal and Shyam Meera Singh ,under terrorism laws for posting about anti-Muslim violence in Tripura.

The 2021 World Press Freedom Index by Reporters Without Borders has ranked India at 142 out of 180 countries, calling it “one of the world’s most dangerous countries for journalists.” Since Narendra Modi’s Bharatiya Janata Party (BJP) won a second mandate in 2019, the report stated, “pressure has increased on the media to toe the Hindu nationalist government’s line. Indians who espouse Hindutva…are trying to purge all manifestations of “anti-national” thought from the public debate.”

Modi and the BJP first rose to power in India in 2014. Since then, there have been constant attacks on journalists who question or criticize the ruling regime. While physical violence is the most visible manifestation, journalists face a range of threats, including censorship, economic hardships, political pressures, and job insecurity. Journalists are routinely threatened, intimidated, arrested, booked—and silenced through gag orders and charges concocted by the state. Those who speak up against the current government are also at risk of being booked for sedition or arrested under draconian laws such as the UAPA, which unilaterally designates individuals as terrorists without the need to provide evidence.

Watch the State (WTS), set up by the Polis Project in 2019, documents and analyzes patterns of state violence, aiming to understand what constitutes it by looking at the physical, structural, and symbolic dimensions of violence and its various social, political, and economic manifestations. “Mapping patterns of violence against journalists in India” is a WTS data journalism research project that gathers and visualizes verified instances of violence against journalists in India between 2019 and 2021.

India has indeed become a very dangerous place to be a journalist: WTS documentation shows that between May 2019 to August 2021, 256 journalists were attacked for doing their job. The police appear to be the main perpetrators in BJP-ruled states, in Jammu and Kashmir, and in Delhi, where they directly report to the Ministry of Home Affairs. The BJP-ruled states are in general significantly more dangerous for journalists than others. 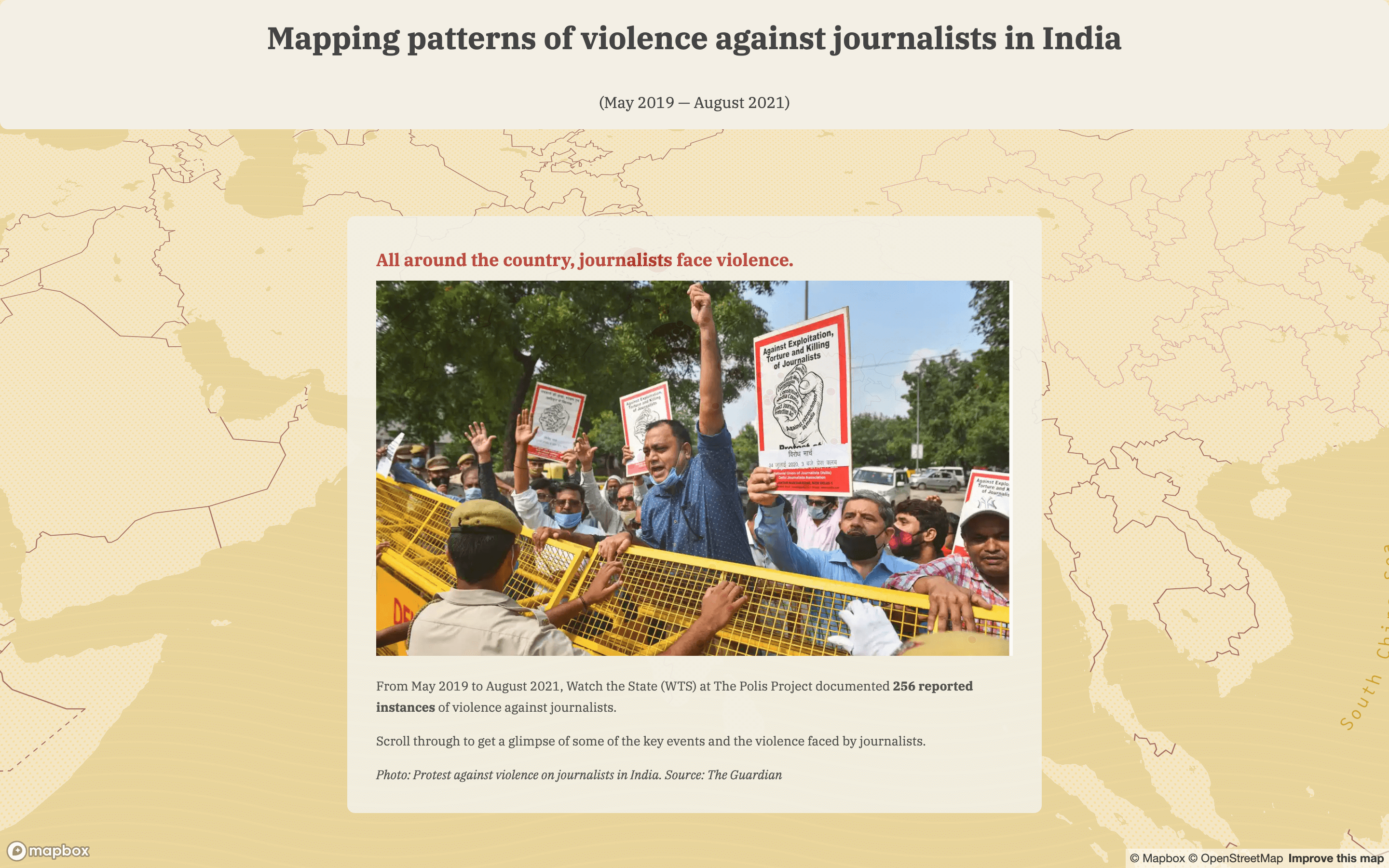 Since its inception, WTS has kept track of systematic aggressions against journalists who report on events such the Covid-19 pandemic, the anti–Citizenship Amendment Act  protests, the Delhi Pogrom in 2020, and the ongoing Farmers’ Protests. The data collected by WTS over the course of two years show that the Indian state and its agencies have used First Information Reports (or FIRs)—documents police draw up when they receive information about an alleged offense for which an officer can make an arrest or begin an investigation on their own initiative, without, respectively, a warrant or a court order—physical assault, threats, intimidation, detention, arrests, sexual assault, sedition charges, and charges under UAPA to attack journalists and limit the ability to do their job.

The database also sheds light on the ongoing media clampdown in Indian-controlled Kashmir, where harassment, intimidation, and assaults at the hands of the army and the police are the norm rather than the exception. In the Union Territory, besides charges under draconian laws, systemic threats, intimidation, harassment, physical assault, and gag orders, the state has also started cutting ​​access to funding to media organizations that don’t amplify the government’s propaganda.

According to UNESCO, between 2006 and 2019, 1,200 journalists have been killed globally while or for doing their job. The agency in 2020 also ranked India the sixth-most-dangerous country for journalism in the world, after Afghanistan, Mexico, Syria, Somalia, and Yemen. This terrifying figure does not include the thousands of reported or unreported nonlethal attacks that include harassment, aggressions, threats as well as arbitrary detention, torture, and enforced disappearances. In the case of India, the techniques of intimidation are both physical and legal. On the one hand, journalists have been killed, subjected to physical violence, threats, assaults, and online and offline attacks; on the other, the state and its agencies make them the constant target of legal threats through arrests, illegal detentions, denial of bail, and FIRs.

The WTS database shows the unprecedented legal harassment of journalists, in effect turning their profession into a criminal activity. The police now routinely file criminal charges against them, including sedition​ charges, for the ​crime of reporting​. Journalists have been detained and arrested for reporting victims’ versions during instances of police violence or for contradicting the state-sanctioned description of events.

By agreeing to uphold non-bailable charges and interminable pretrial detentions, the judiciary has also become actively involved in the persecution of journalists. The judiciary has not only failed to prosecute crimes against journalists; it has also contributed to their persecution through the systematic violation of their rights. Ad hoc violations of the right to due process have been systematically employed to destroy the free and fair press in India.

India’s descent into an authoritarian police state characterized by arbitrary arrest and imprisonment of political and ideological opponents in the middle of a pandemic has been well-documented. The Indian state is effectively using courts, the police, and the prison system to punish journalists. What we see is the emergence of a model where the judiciary coexists and collaborates with the arbitrary power of the ruling government.

Law enforcement and robust institutions are key to fighting and ending impunity for attacks against journalists. In India today, however, the very institutions that are meant to protect them play an active role in enabling and sustaining the ongoing assault against journalists and their freedoms. The complicity between the state, the judiciary, and the police in the attempt to silence journalists needs to be acknowledged and countered. When the judiciary is the midwife of tyranny, law becomes the most lethal weapon of a fascist state.

Pooja George and Vedika Inamdar contributed to this report. The map was realized in collaboration with Rasagy Sharma.