Dilan Yesid Suárez dreamed of forming a gridiron football team in Usme, a community on the outskirts of Bogotá, Colombia. Suárez spent three years playing the sport in Chile before returning to Colombia in 2019, where he hoped to spread his passion for the US pastime.1

That dream ended last month. On June 9, Suárez, a slim, soft-spoken 21-year-old, was on his way home from working at a construction job when he encountered marchers protesting near his neighborhood, one of many working-class districts that surround Bogotá. Police were firing tear gas and stun grenades to disperse the crowd, he remembers. When Suárez tried to cross the street, he made eye contact with an officer from ESMAD.2

“I was about six meters away when he trained his gun on me and fired. He was aiming for my face,” Suárez recalled. “There was a lot of blood.”3

Members of ESMAD, the riot control unit of Colombia’s national police force, allegedly fired a rubber bullet at Suárez, taking out his right eye and leaving him permanently scarred.4

Watch: Dilan Yesid Suárez in his own words.

“It’s hard to live without an eye. It’s like knowing you can’t do anything, a kind of impotence, like a void,” said Suárez. A blackened gash runs across what used to be his eye. The injury left Suárez with 13 fractures to his face, and required multiple surgeries to repair as much of the damage as possible.5

A wave of mass protests has gripped Colombia since April 28, when thousands took to the streets in response to a proposed tax reform by the government of President Iván Duque. The reform would have imposed new sales taxes on basic foodstuff and expanded income taxes. Colombia’s economy, like many of those in the region, took a hit from the Covid-19 pandemic, leaving millions confronting extreme poverty and hunger. The proposed tax reform was seen as an attempt to shift the burden of post-pandemic economic recovery to the poor and working class in one of Latin America’s most unequal countries.6

The tax reform was quickly revoked, but a national strike soon swelled into a mass movement composed mostly of people from poor and marginalized communities, including Afro-descendant, Indigenous, farmers, and young people.7 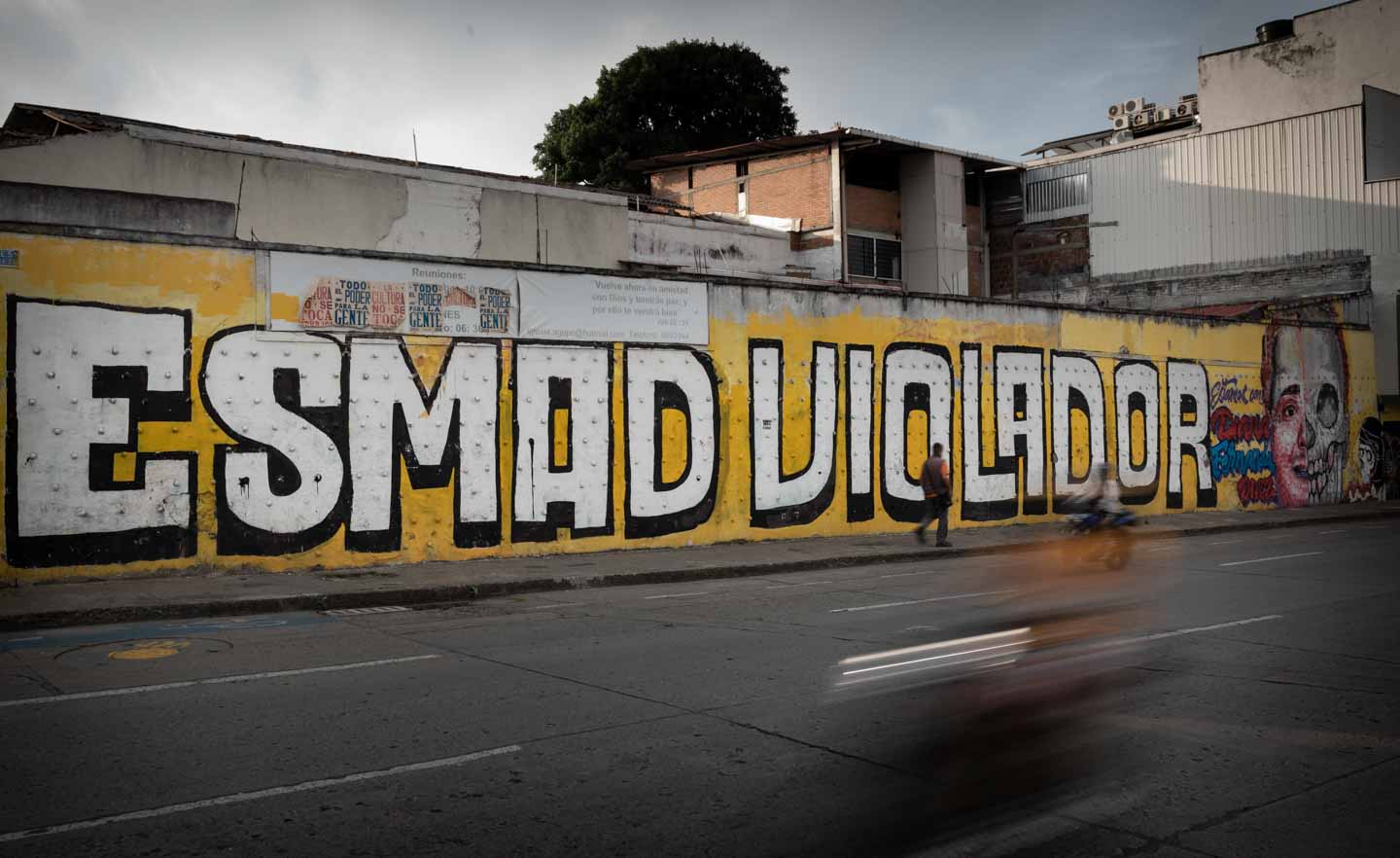 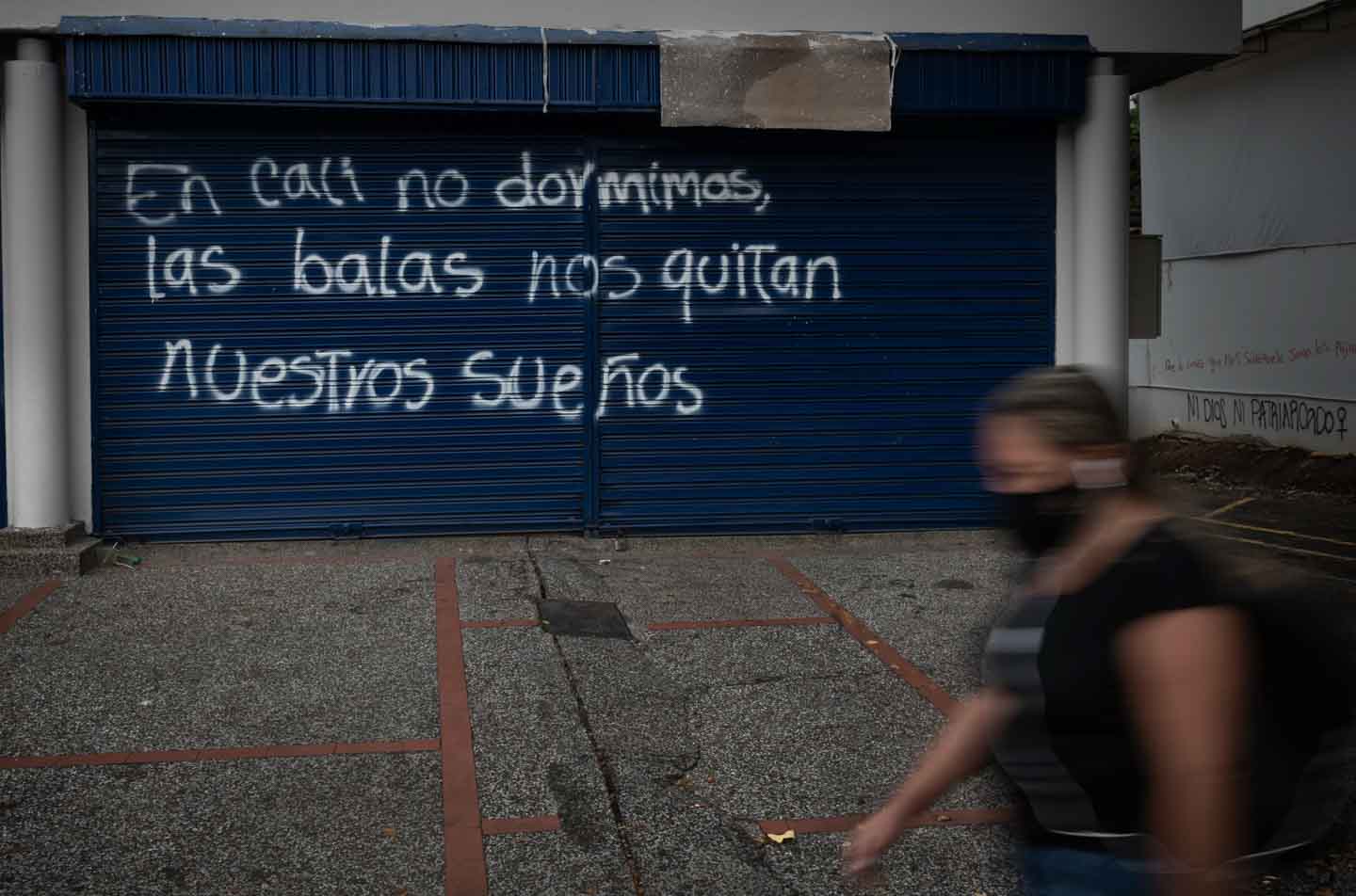 “In Cali we don’t sleep, the bullets take away our dreams.” (Manuel Ortiz)

The conjoining of these otherwise disparate groups is being fueled by a shared demand for essentials, including better health care, and access to education and jobs, things many Colombians feel they have been denied.8

In the eyes of the government, many of the tens of thousands who took to the streets in nationwide protests are vandals and terrorists backed by the political opposition and former leftist guerrillas. As a result, Colombia’s police has taken an aggressive, zero-tolerance approach.9

The Kids Are Reimagining International Solidarity

“ESMAD is using a strategy that is at once less lethal but intended to silence the protests,” said Ruben Dario Acosta Ortiz, who directs the Center for Latin American Legal Studies and is a coordinator with Primera Linea Juridica, a national network of more than 3000 lawyers formed in response to the state’s handling of the protests. The group provides free legal aid to detained protesters as well as victims of police violence.10

A July 7 report from the Inter-American Commission on Human Rights notes the state has opened 11 investigations into cases involving severe eye trauma as a result of ESMAD actions, though human rights groups count 82 such incidents and say there may be as many as 200 since the protests first began. United Nations protocols dictate that nonlethal munition should be aimed at the lower extremities of the body, away from the head and vital organs. Human rights lawyers in Colombia argue the targeting of protesters’ eyes is part of a deliberate strategy by police.11

“These attacks are systematic…and they are symbolic. The message being sent is that when young people open their eyes, they must be taken out,” Acosta said.12

Similar tactics were employed by police in Chile during protests there in 2019 when human rights groups documented at least 285 cases involving severe eye trauma inflicted by police. Acosta and others believe Colombia has taken a page from Chile’s playbook.13

In the case of Suárez, lawyers for the government have contended he was among a group of protesters hurling rocks at police, and that his injuries were likely caused by one of those projectiles. Footage taken during the incident in question, however, shows protesters fleeing as ESMAD fires into the crowd. A voice can be heard from behind the camera saying, “The face, the face, they shot someone in the face.”14

Helen Marmolejo Sarmiento is a nurse in Cali and was among a group of nurses delivering medical support to demonstrators at the height of the protests. “We saw frequent eye injuries, as well as head trauma from stun grenades,” she said, adding that her team treated victims of sexual assault as well as individuals suffering from respiratory ailments brought on by tear gas, “including babies, the elderly and pregnant women.”15

The attorney general’s office in Colombia has put the number of dead from the protests at 21, including two police officers. A July 7 report from the Inter-American Commission on Human Rights cited 76 deaths, with hundreds more injured and disappeared since April.16 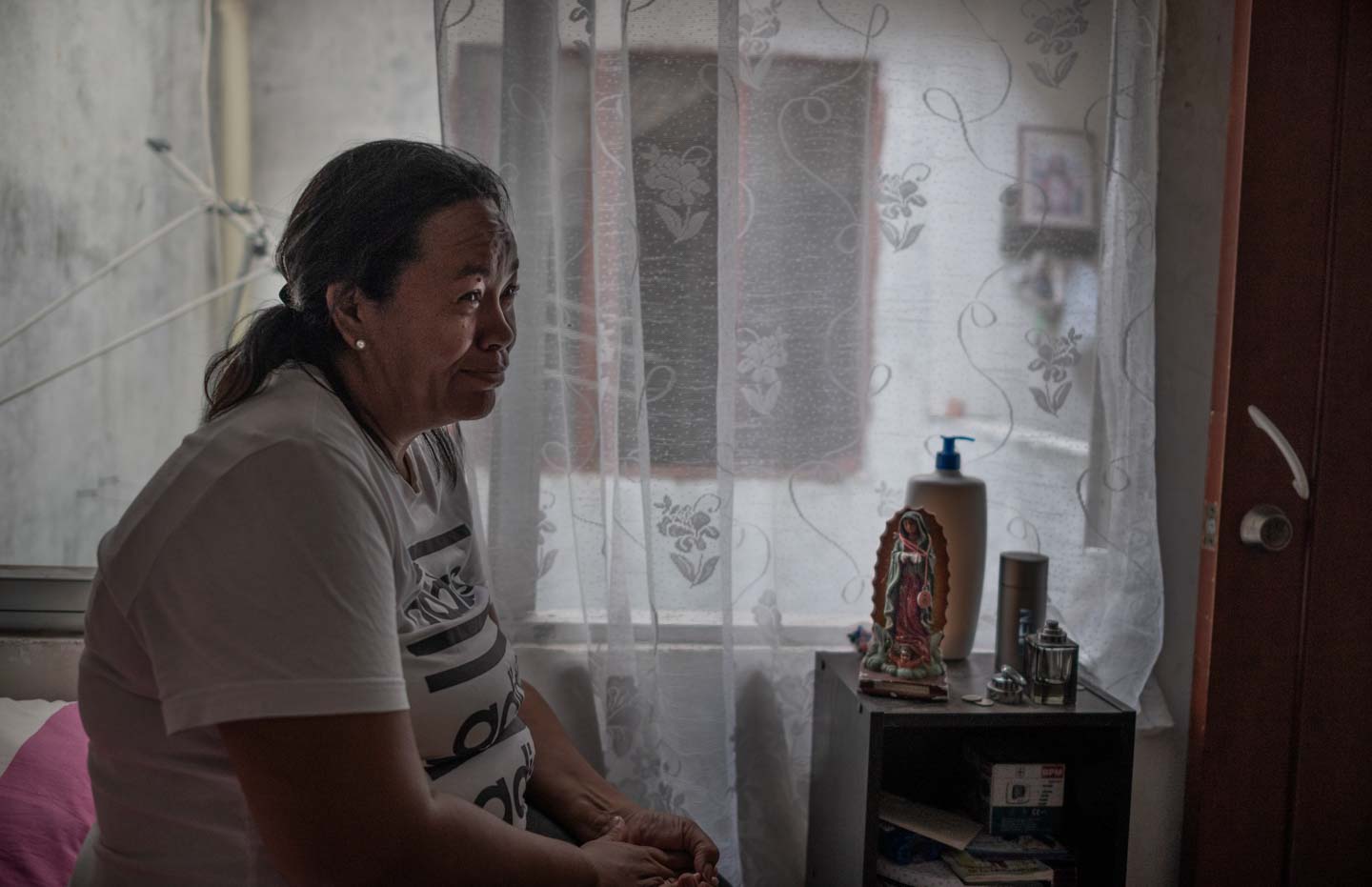 Sandra Moreno’s son, Santiago Moreno (23 years-old), was killed during protests in Cali May 1. “He wanted to go into the army, but he told me that as a black man he would never be able to rise in the ranks.” (Manuel Ortiz) 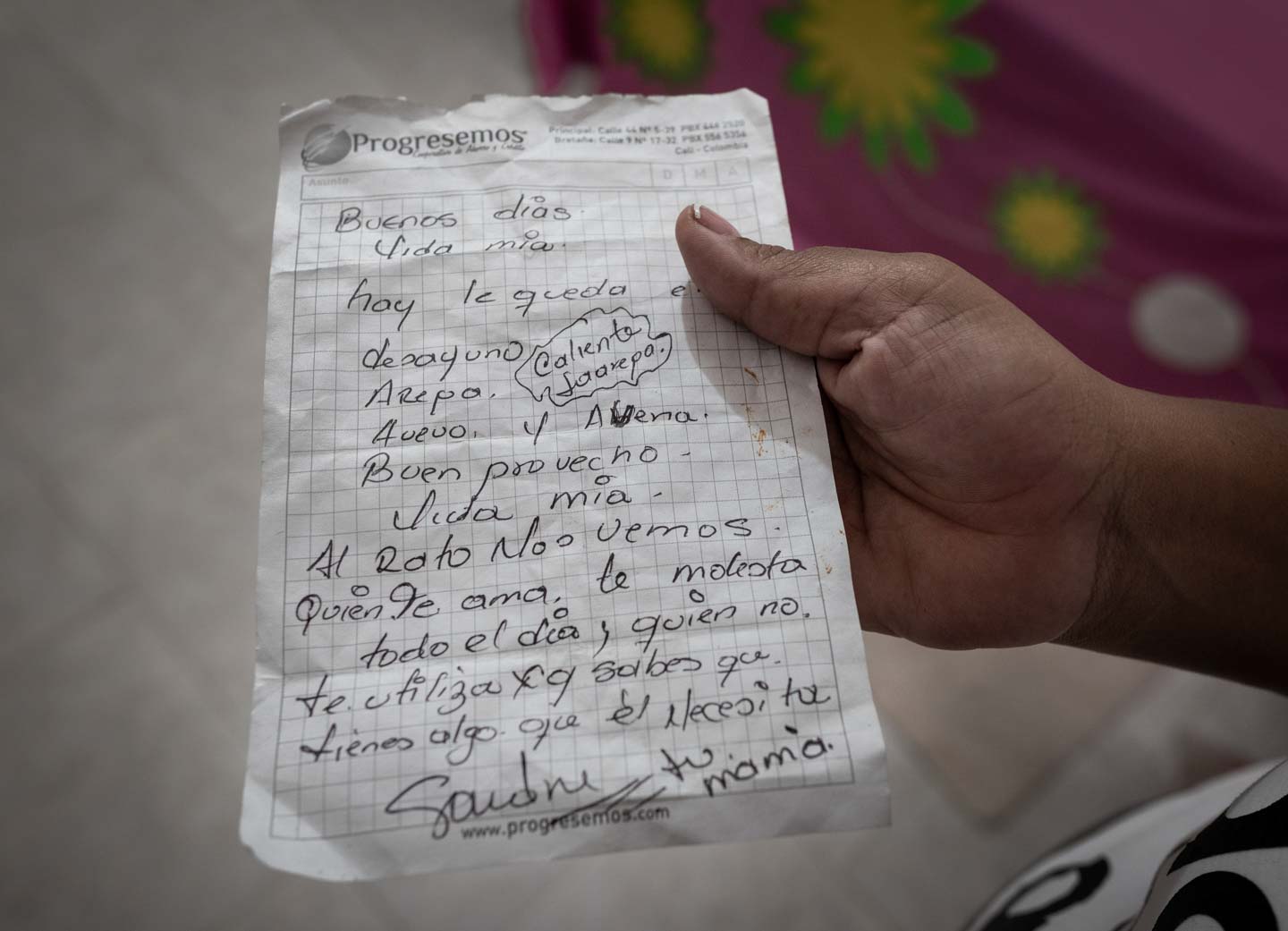 Sandra Moreno holds up the last letter she wrote to her son, who moved to Bogotá in search of work, before his death. “My life, see you soon.” (Manuel Ortiz)

One of those killed was 26-year-old Christian David Castillo. Fighting back tears, his father, Eduar Castillo, described Christian as good-natured and well-liked by his friends. He recalled the night his son died: “He went to join one of the marches. I called him to come home, but he never answered. The next morning, I saw he wasn’t in his room, so I went to the site of the march. His friends told me he’d been shot.”17

Castillo said he met with prosecutors soon after, who dismissed his son’s death as an accident. Similar accounts were shared in close to a dozen interviews with parents of young people killed during the protests in Bogotá and in Cali.18

“The police here are violent actors,” Castillo said between sobs. “I don’t want another young person to die in this way. My message to the mothers and fathers of this country is: Don’t be apathetic. This could be your child.”19 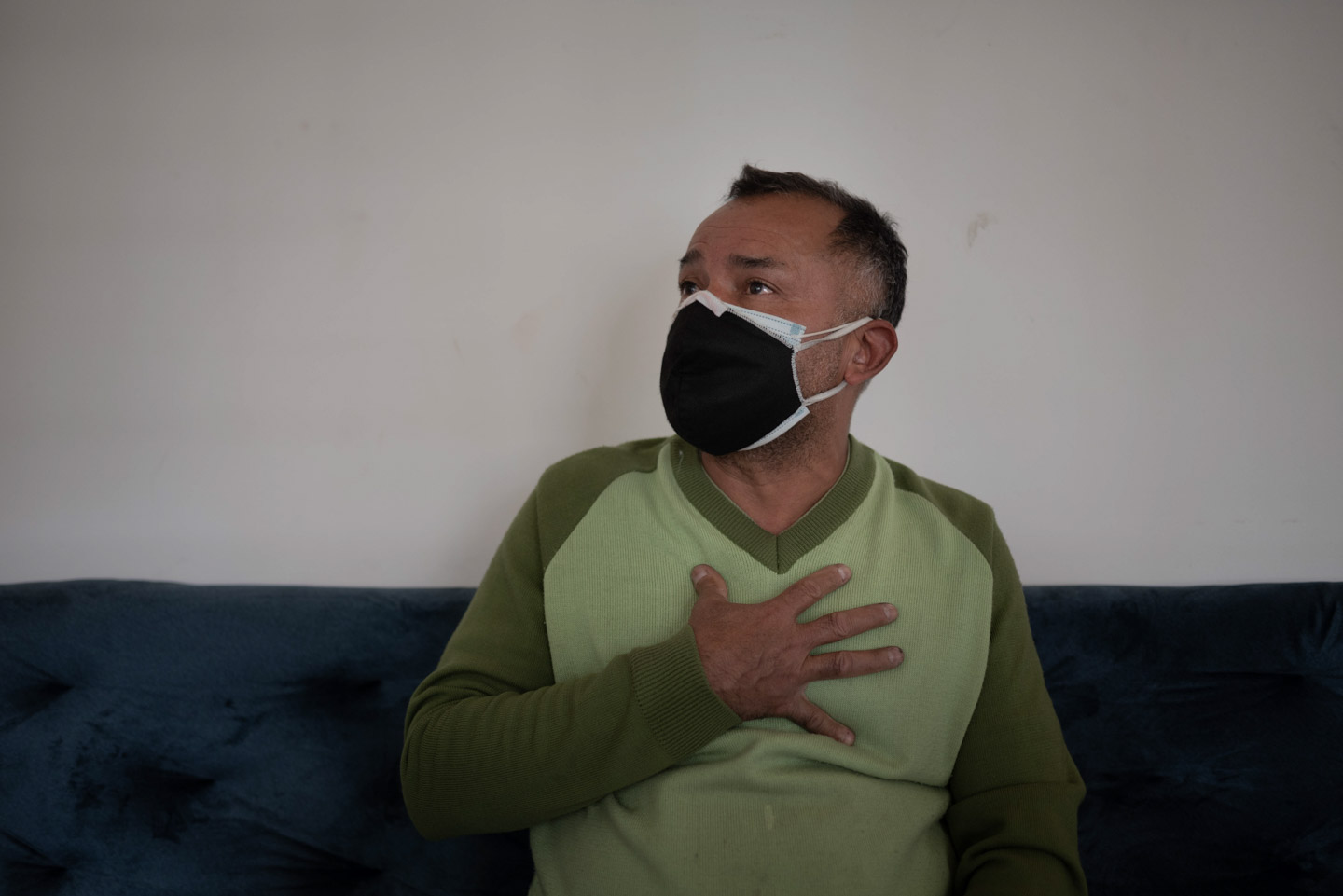 Eduar Castillo’s son, 26-year-old Christian David Castillo, was shot and killed during protests in Bogotá. Prosecutors with the state have dismissed the case as an accident. (Manuel Ortiz)

On June 28, a 27-year-old motorcyclist in Bogotá inadvertently rode past a cable that protesters had stretched across a street as one of several blockades erected in the city. The accident claimed the life of the motorcyclist, severing his head from the rest of his body. Government authorities ruled it a homicide.20

The accident further eroded support for the protesters among Colombians who were already torn over the demonstrations. But many on the front lines say they are determined to press on.21

“Before the protests, I would go days without eating!” shouts a young Afro Colombian during a nighttime gathering on the corner of a blockaded intersection along Avenida Simón Bolivar in Cali with representatives of the national strike who have been negotiating with the government. “Since the protests, I now have food to eat.”22

On July 20, Colombia’s independence day, frontline members of the strike in Cali are planning to lead a massive caravan on a 300-mile march to the capital, Bogotá, to draw attention to their cause.23

From behind a pair of shades, Suárez describes his time in the hospital. Colombia’s social system categorizes residents according to income. There are six strata, with number one being the lowest.24

“I’m from strata one,” said Suárez, a designation that entitles him to Colombia’s state-subsidized medical care, available to those on the bottom of the income scale. But Suárez said his family has incurred large medical costs for the rounds of surgeries and other care he received since that night at the march.25

More troubling were the visits from police while he was hospitalized. Suárez said officers came asking questions about whom he’d spoken with, telling him he didn’t need to get a lawyer or take legal action. “They’re intimidating us,” he insisted. “I would like them to stop this aggression, to stop attacking the youth, to stop harming us like this.”26